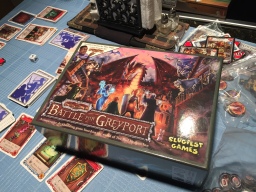 I have too many board games. Cough. If I see a board game that is cooperative, more times than not, I will just pick it up. My collection has ballooned because of this! And I was reminded (recently) how ridiculous I have become … a friend bought another friend over for games night at my house. He was so overwhelmed by all my games (some not even opened), he ended up filming a video panning over all my games. Okay, okay, I need to get some of them played.

So, recently, I have been on a quest to get more games played! And because my favorite type of game is cooperative, 9 times out ten, the game is a co-op. The best way to get my games played is to learn it first, then teach it to my friends! But I am BLOWN AWAY by how many cooperative games do NOT have a solo player mode for me to learn with! Really! Off the top of my head:

I don’t understand this! It should be easy to have a solo mode in a cooperative game! If NOTHING else, the solo rules should be “take 2 positions in the game and have the solo player play both positions” (or 3 or whatever). It’s not the best way: sometimes it will work (CO-OP solo mode explicitly has the solo player play 2 characters in the game), and sometimes it won’t (Sentinels of the Multiverse needs 3 characters for balance—there is so much going on, it’s too overwhelming to play 3 characters).

So, to all game designers of cooperative games, I henceforth issue this challenge:

Saunders’ Law: All cooperative board games should have a solo mode!

To drive this home, I will note an experience we had with Time Stories  about 6 months ago. Time Stories is for 2-4 players: there is no solo mode.  Because the game is a “play-once story” with lots of plot that can be spoiled, you can’t just try it first.  So, we tried, as a group, to learn this game with 4 players.  We got bogged down in some of the rules because no one knew how to play.  We did get through it, but it would have gone much better if just one person had been able to play  it first.  My friend Josh and I were talking: we think Time Stories would really benefit from a tiny  deck (5? 8? cards) that demos most of the mechanics for a solo player.   Then, that one person can learn the mechanics, without spoiling the rest of the game, and teach others.  A solo mode is Time Stories would have gone a long way for our group.  Honestly, that game group’s opinion of Time Stories was sullied because of our “group-learn” experience.

I hope game designers will heed Saunders’ Law: I think it will make the hobby a better place.

Addendum: Solo Rules for Sentinels of The Multiverse (abbreviated)

Solo variant 1): Go play the iOS/Andriod App. I am not being flippant here: it really is a great way to play solo mode. The app takes care a lot of the fiddliness for you, so that playing 3 SuperHero characters (the minimum you can play with) isn’t too overwhelming.

Solo Variant 2): Take 2 characters to play with: the solo player operates two SuperHeroes. When the characters play, they each play twice: hero 1, hero 2, hero 1, hero 2. This “simulates” playing a 4-player game (with is fairly balanced), but with much less overhead–there’s only two characters to operate.

Solo Variant 3): Play 3 characters. This will work, and it’s pretty fun once you know the game, but it is still an awful lot of maintenance for 1 solo player. I like the game enough that I will play this way sometimes.

3 thoughts on “Saunders’ Law: All Cooperative Games Should Have a Solo Mode”