Mint Cooperative is a tiny little cooperative game that was on Kickstarter in about Sept. 2019 (about a year ago at the time of this posting). My friend Sam had backed both Mint Works (a tiny worker placement game) and Mint Delivery (a tiny pickup and deliver game) and both had been decent. Mint Cooperative is in the same line of little mint boxes containing little games. The cooperative superhero theme also appealed to me (as long time readers of my blog know, per my Top 10 Cooperative Superhero Board and Card Games). So, I went ahead and backed it. $10! Plus 5$ shipping!

The back of the tin shows what this game is: a light (15-30 minutes) cooperative game for 1-4 players with a superhero/cavity fighting theme.

Mint Cooperative is the size of a larger mint tin: it arrived in a little plastic wrapper with a little Kickstarter extra (2 cards: additional Villain and Stunt).

The cards are of decent quality (they appear linen-finished) and you can read them pretty well. I have to admit, I was surprised by this: I thought I’d have to get my glasses, but in general, I didn’t need them. Above are all the little cards:

The rest of the cards are larger (about the size of two smaller cards) and are: 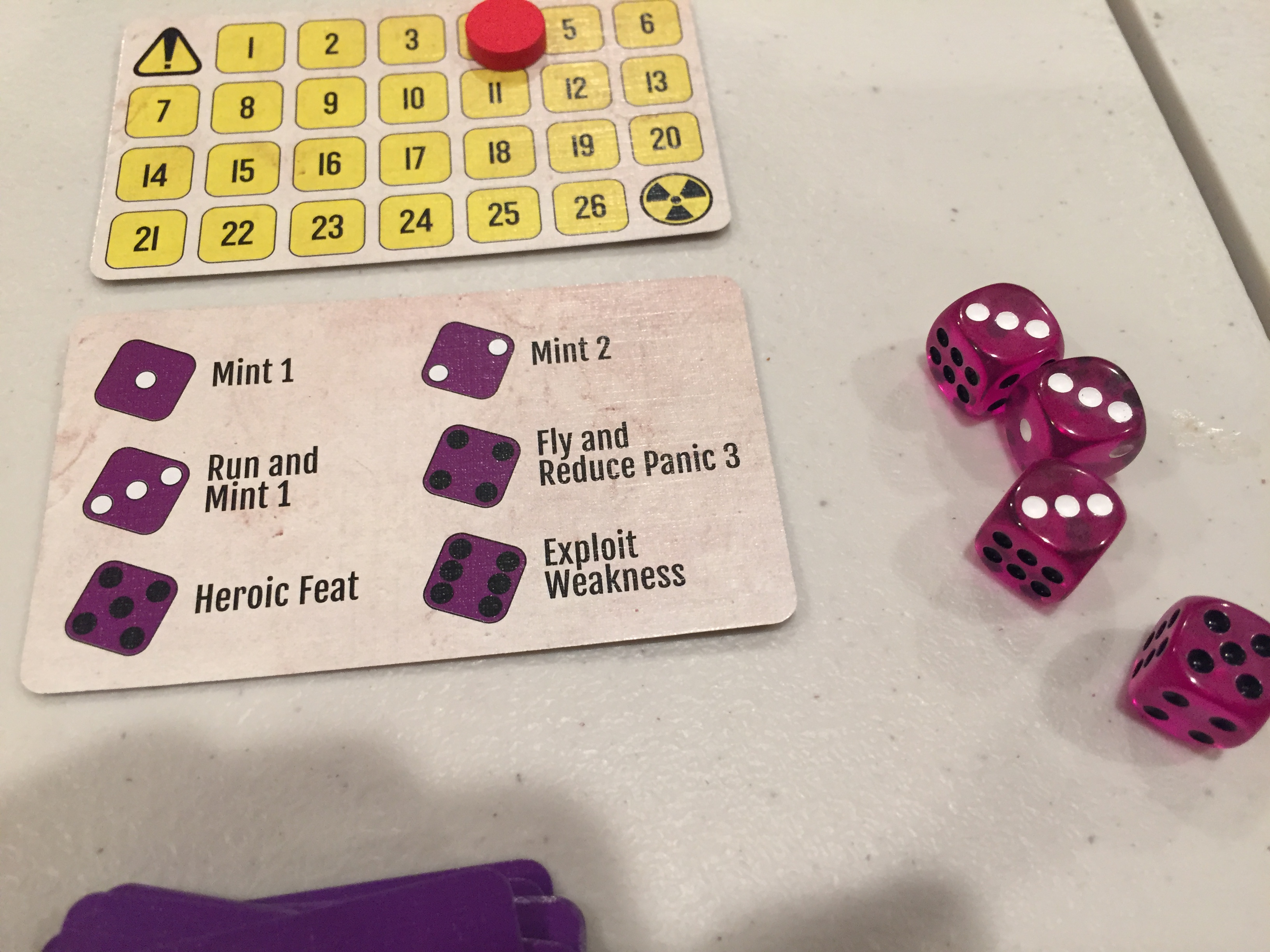 We also get 4 tiny dice which are surprisingly readable (see above next to the reminder card).

And of course, Mints! Well, wooden disks that looks a loooooot like Red and White Mints. But don’t eat them!

But the coolest pieces in the game: the little hero meeples. These are LITTLE meeples! I put a #2 pencil next to them to try to show scale, but considering how small these little meeples are, there is a surprising amount of detail on them! They are probably my favorite component in the game. If nothing else in the game says “This is a Superhero game”, these little meeples do!

The rulebook …. fits in the tin. Barely. So that it fits, it’s a pamphlet that’s been folded many times. See above how it comes out of the tin!

It doesn’t quite flatten out very well, but it is pretty readable. The text doesn’t seem too small.

There’s a components section: this REALLY needs some icons or pictures here! It would just help a little.

The set-up chart is good and readable, but they really needed a numbered legend for each step: the actual set-up rules are numbered, but what do they correspond to on the picture? 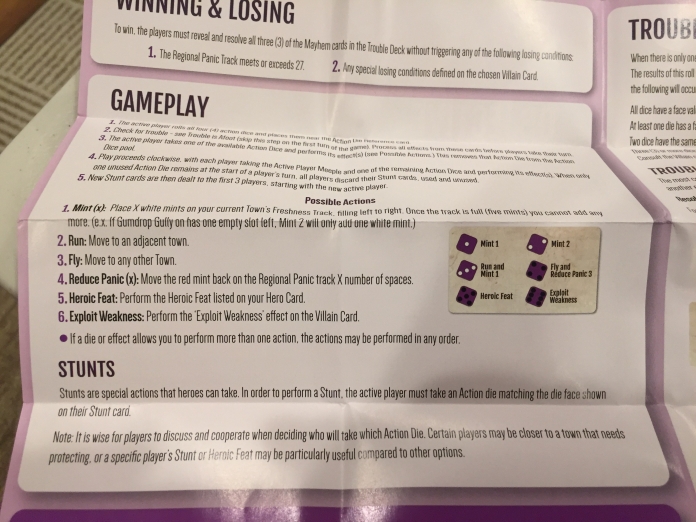 In general, the rulebook is … ok. I read it and was able to learn the game. I was pleasantly surprised that I could read the text! I was expecting tiny, tiny, text, but it was readable without glasses or magnifying glasses. So kudos to that! 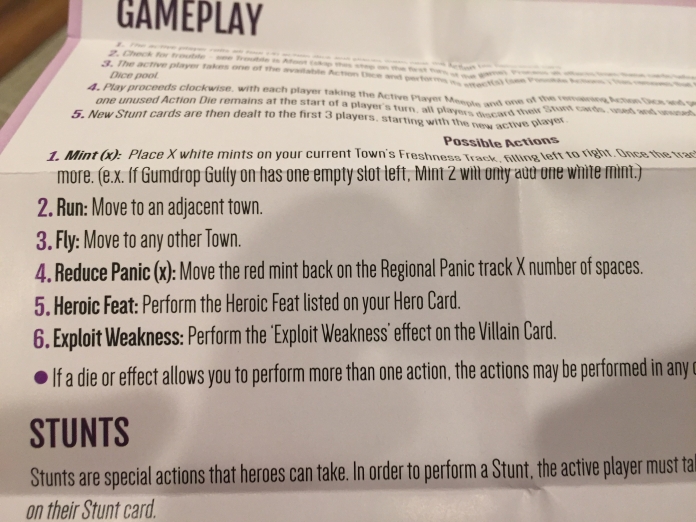 .. but, there were a number of things missing from the rulebook that I think should have been there. For example: Where is Weakness on the Villain Card? (Turns out the Villain cards are double-sided, and I think it’s on the back bottom). I do prefer the text based systems (like Mint Cooperative uses) instead of Icons most of the time, but there were a bunch of cards that weren’t labelled: What is Regional Panic? (It was labelled in the set-up, but it really should have been ON THE CARD) What are the Heroic Actions? After playing the game, you figure it out, but it kinda makes you grumpy. An Icon or a Label would have gone a looong way. Again, if the set-up picture had been NUMBERED, I could have correlated the pieces in the set-up a little easier.

The rulebook was good enough, but I feel like it reallllly needed another pass to help correlate pieces in the game. Eh, I learned it. 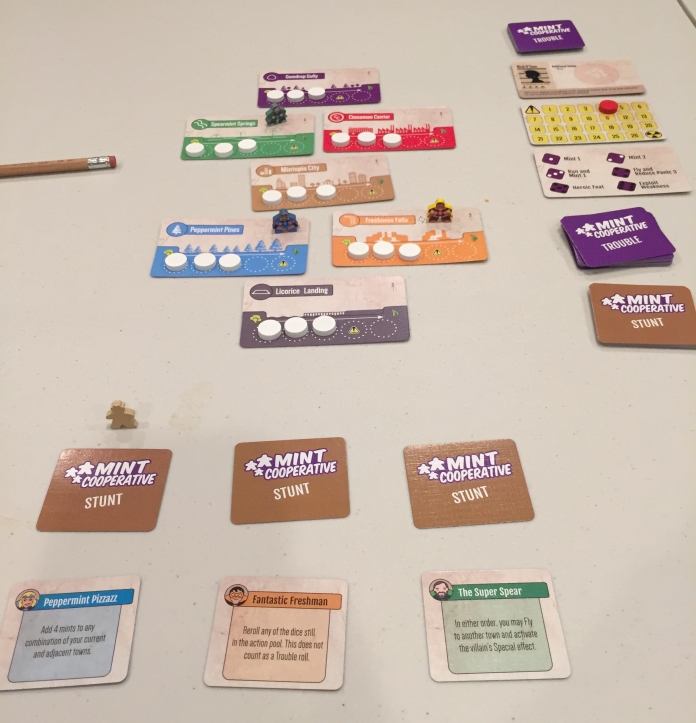 So, this is actually kind of a cooperative dice placement game. The players roll the 4 six sided dice and choose which three they will want to play. You either play a dice on a Stunt (one-time, see below) or the activity listed on the reminder card.

The little reminder sheet next to the sheet reminds players what the dice can do. You can use the dice for what’s listed, or potential use a stunt:

So, the players talk and decide who wants to use which dice. When the third die is used (the fourth goes unused), the dice get rolled again, unused stunts are discarded (stunts reset every turn), and play continues.

Basically the actions are:

To win the game, you need to survive until the three Mayhem cards (see above) have been revealed (from the Trouble deck) and you have survived.   You lose if Regional Panic makes it all the way to the top!! So, on your turn, you fly around the city and keep the city “fresh” (by putting mints on City Locations) to keep the city’s “terror?” “cavity?” markers covered. See below: 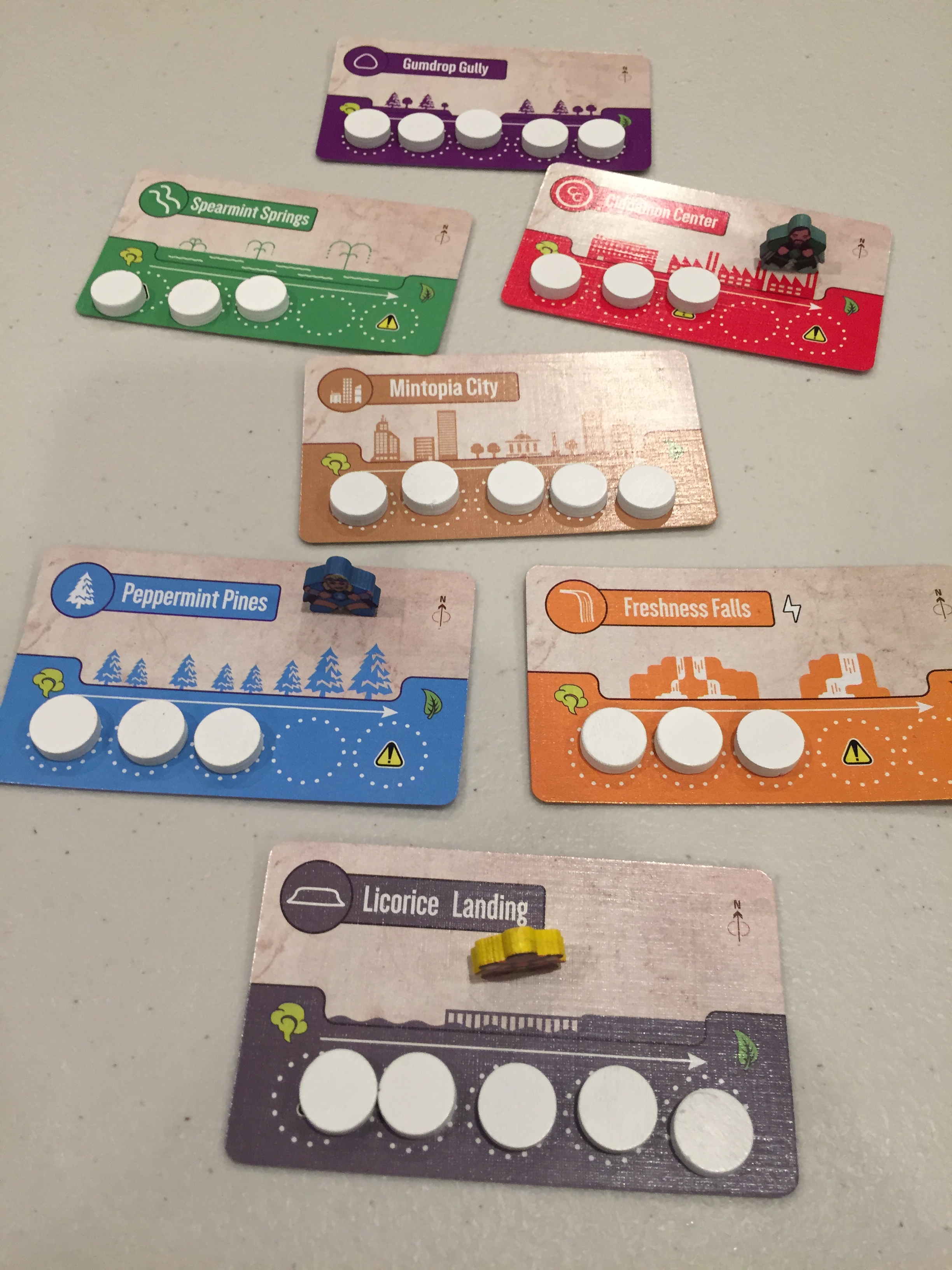 The Regional Panic will go up based on the number of yield signs showing.

The Trouble cards are what cause the city to become less “fresh”:

The Trouble card above tells you to take 2 mints off of each city Location listed to the left. (If there are no mints, take as many as you can). For each city, if doing this reveals any yield signs (“terror?” “cavity?”), then the Regional Panic goes up by that amount. (For the record, I hate the term Regional Panic: it sounds each region or city Location has its own panic level!!! That chart should have just been called “Panic Level” or “Terror Level” or more thematically, “Halitosis Level” or “Bad Breath Level”!)

The mechanism for placing Trouble cards is different and interesting. At the start of the turn, when you roll the dice, the number of doubles/triples rolled determines how many Trouble cards you draw! This is mitigated by some rules, but in general, you can draw 0, 1 or 2 Trouble cards. In my games, I saw almost 2 cards every time. This is a Catch-22: you DO NOT want Trouble, as it causes Regional Panic to go up … BUT the Mayhem cards are sprinkled in the Trouble deck (a la Pandemic) so you want the Trouble cards to come out to get to the Mayhem cards! You can only win if you get through all three Mayhem cards!

This mechanism is interesting because it’s self-balancing. You always roll 4 dice, do Trouble, take 3 actions (no matter the number of players), then start over. It’s simple, balancing, and easy to explain (although some of the double rules are weird).

See above for a solo set-up!

The game works fine solo. There are special (but simple) rules for playing Solo: basically, you play as three characters in the game.

The game flows decently well solo, but you do have to keep track of 3 different powers for three different characters. It took about 40 minutes for my first play: I could see it taking 15-30 minutes on subsequent plays.

This solo mode is a good way to learn the game, so thank you Mint Cooperative for adhering to Saunders’ Law and having a viable solo mode!

From a price perspective, they are similar. Solar Storm is about 3x bigger and maybe 1.5x more expensive.  Mint Cooperative is small and can fit in your pocket: Solar Storm can’t.   Unfortunately, in order to fit in my pocket, I needed a rubber band: the mint package was falling open. 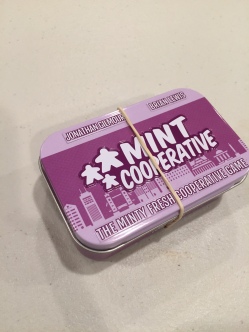 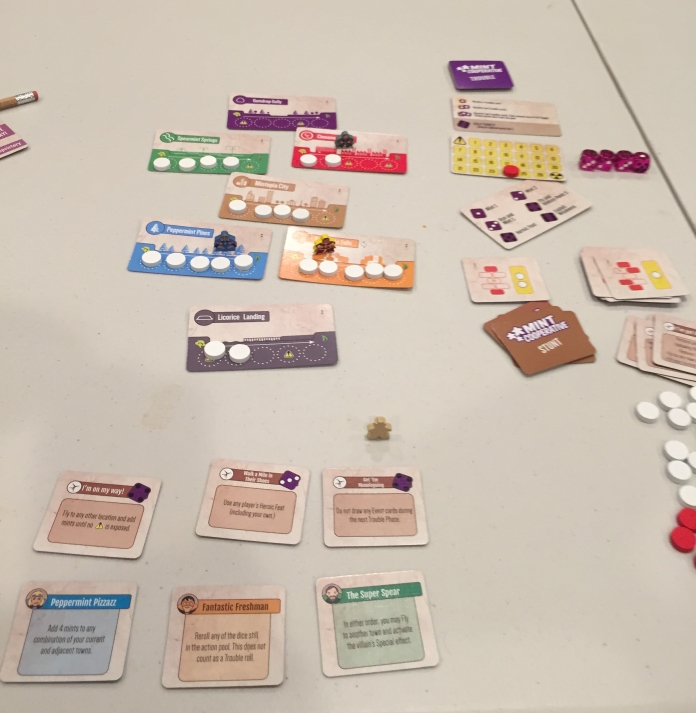 Like Mint Works and Mint Delivery, Mint Cooperative was decent. I liked it okay, but I didn’t love it. I didn’t think the theme really came out (so I very much doubt it would make my Top 10 Cooperative Superhero Board and Card Games), so that was a little bit of a disappointment. Honestly, the most thematic part of the games was the little superhero meeples: I Loved those! 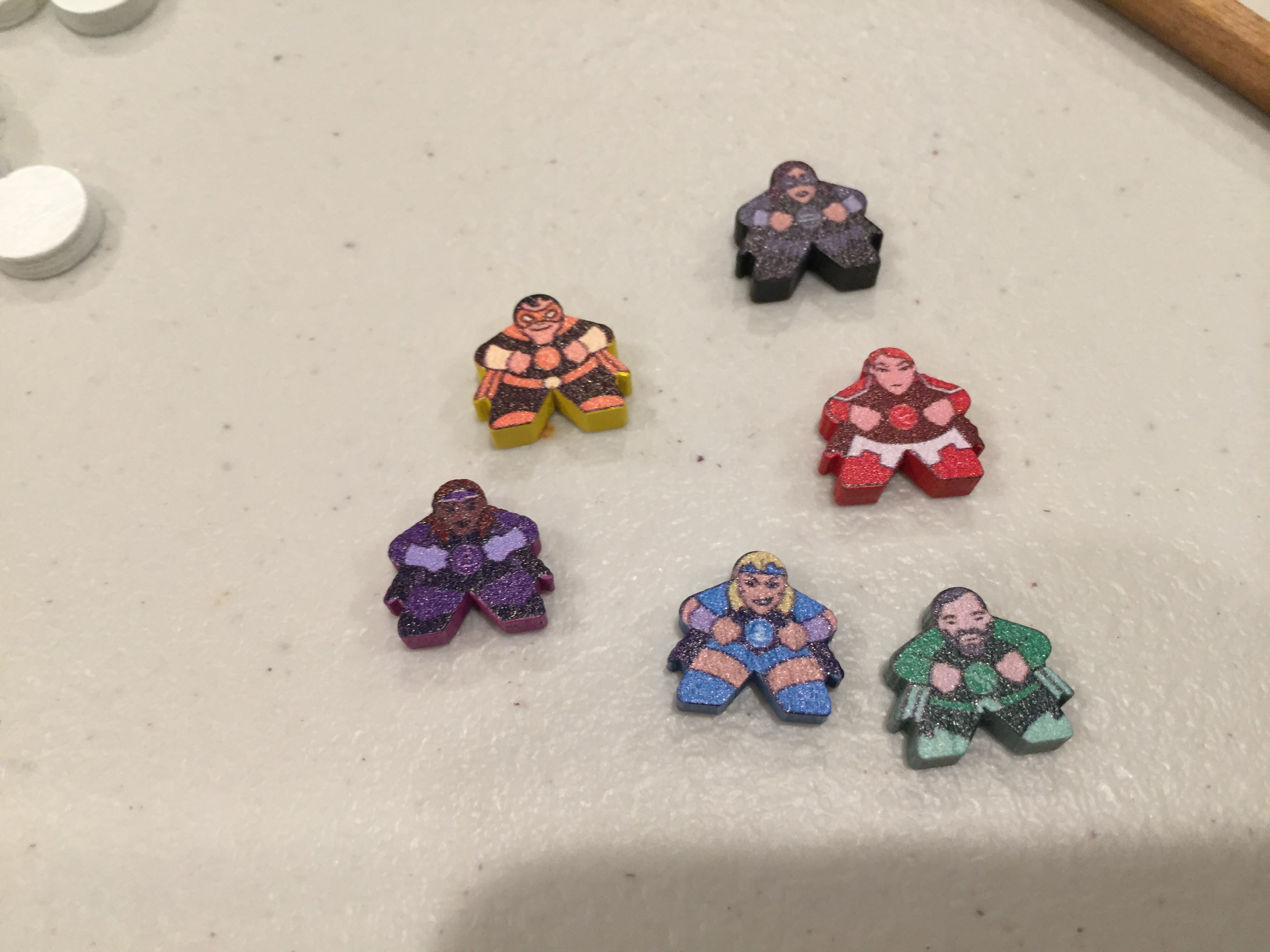 Having said that, if this looks even a little interesting to you, pick it up! It’s only $10! The game was good enough and you’ll have some fun playing it. For $10, I can plop it into my pocket and play it with you. And we’ll have a good time, if not amazing.

P.S. It is a small game, but it does take up some space on the table! I wouldn’t recommend it in too small of a space … a airplane tray table is probably too small …