Some of you might recall me doing the Review of Unicornus Knights: Part I some time ago.  Basically, I enjoyed the game enough, but was frustrated with the rulebook.  I knew they were doing a 2nd version of the rulebook (but NOT the game), so I  wanted to see if it were easier to play.   Honestly, it fell by the wayside and I didn’t get a chance to try out the new rulebook.  Recently, however, one of the designers (Kuro) of Unicornus Knights was launching a new game on Kickstarter (Testament) and that reignited my interest in trying out the new Rulebook.

The updated version 2.0 of the Unicornus Knights rulebook is available here.  I went ahead and had both versions opened at the same time so I could compare and contrast the two.

I very quickly learned something new that I hadn’t known in my other playthroughs: the empire tiles are black and the kingdom tiles are brown.  How/Why did I did not know/notice that!?  Because the new rulebook points it out (above, upper right) and the old rulebook does not (above, lower right) right.  So, right away, I am happier with the new rulebook!  And yes, there are definitely differences!

Interestingly, the basic set-up has changed and is less random.  All the Kingdom Tiles are on the left and right rather than randomly mixed in the last 6 placed.

I think this is partially a “simplify set-up issue” (it’s always nicer when the set-up is easier) and a “make the game less swingy”.   If too many kingdom tiles come up in the middle of the board, you could see how that would make the game easier as the Princess could simply stroll through those regions.  Now, the game always starts with the Kingdom tiles on the left and right (13-18).

How did my first playthrough go?  It went well!  It seems like they addressed most of the issues I had with the rulebook:

A few things fell by the wayside:

My biggest complaint was that there WAS STILL NO SOLO MODE  IN  THE GAME!  Seriously, this game is great as a solo game!  So, what I am doing to play solo?  I am just playing 3 kingdom characters at once.   That’s it.  And it works GREAT!  I am really surprised the updated rulebook didn’t add something like this:

Okay, that second sentence is strictly not necessary, but (a) I love Player Selected Turn Order and (b) it’s consistent with what the game does in 2-Player mode.

With the newer rulebook, this is a great game.  I was able to get all the way through a game without feeling too confused.  And all the stuff I loved before, I loved again.  Unicornus Knights made the number 4 position on my Top 10 Cooperative Card and Board Games of 2017.   And you know what?  I like this game even more now.  Maybe it’s because I am not as frustrated as I was those other times with the original Rulebook.

This is a great game.  But ONLY if you get the new rulebook. Here’s the link again.

There’s a number of very big and  very interesting cooperative board game on Kickstarter right now.  Our cup runneth over!

Play as one of your favorite Marvel superheroes … in Chibi form?  There’s a lot of miniatures, and lot of Kickstarter-only miniatures!  If you are even slightly interested in this game, it may behoove you to get it on Kickstarter because of all the exclusives.  I don’t know if the game itself is any good, but Eric Lang is one of the designers: he’s a well-known and respect CMON designer (he was the designer on Blood Rage and Rising Sun to name a few).

Marvel not doing it for you?  How about DC?  Yep, if you like the Batman universe and wanted a fully cooperative game, then … this game has a cooperative mode.  Now, the default mode is one vs. many, but if Detective: City of Angels has taught us anything, a one vs. many game can have a great cooperative mode.

Like Marvel United, this one has a ton of Kickstarter exclusive minis, so again, if you are at all inclined to like this, better scoop it up now! 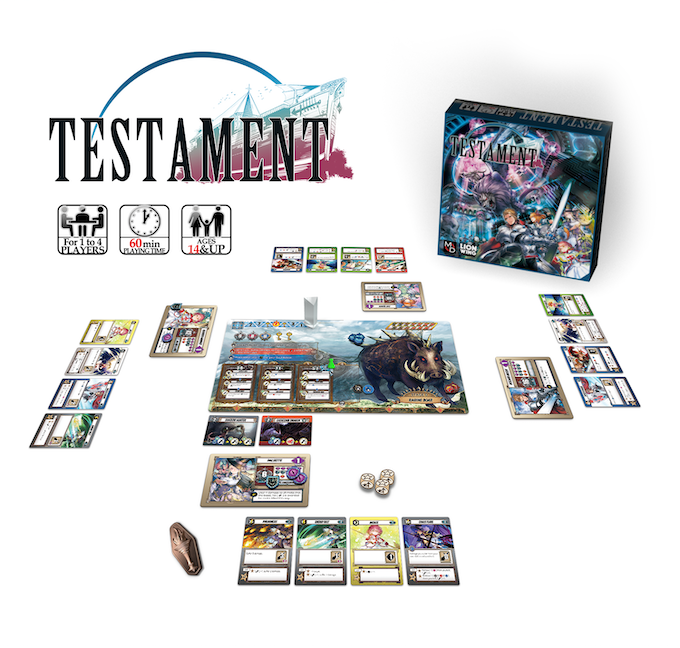 This one isn’t doing as well, but I am very excited for this cooperative game for one reason: the designer is the same as Unicornus Knights, a favorite co-op of mine from a few years ago (it made my number 4 spot in my favorite cooperative games of 2017, just below Spirit Island).  So, even though the rulebook for Unicornus Knights needed a LOT of work (see my review here), I loved the game! I hope they learned their lessons so that the rulebook for Testament will be better!!!   Although the game  has funded, it needs some more love.  Check it out! 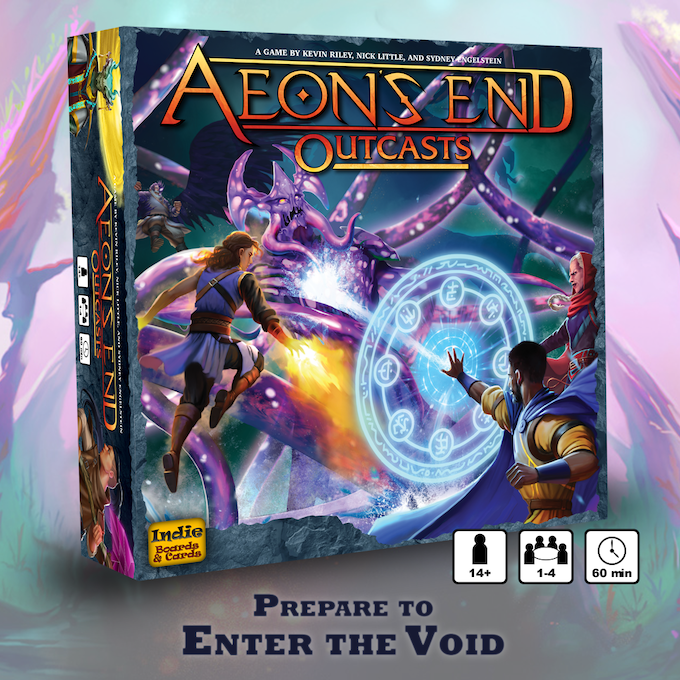 Although I think I might already have too much Aeon’s End content, it’s a fantastic game! Aeon’s End made the top spot(s) on my Top 10 Cooperative Deckbuilders.  Aeon’s End: Outcasts is a big box expansion adding more!  You can also go back and pick up any of the original Aeon’s End stuff too … see my review here of Aeon’s End and War Eternal.

Yes, I backed this.  Like all the other ones too.  Shut-up.

What was my first cooperative game?

This is a cooperative games blog.  We have mostly done Board and Card Games, but we have rarely have alluded to Role Playing Games (like Dungeons and Dragons/Pathfinder in this post).  BUT: the first cooperative game I played was the RPG Dungeons and Dragons.  Our characters worked together as a party to take down some big bad, explore the forest, heal each other, and save each other.   So, even though we nominally only talk about Board and Card Games, RPGs have a special place in my heart and … now my blog.

Get The Funk Out!

Spirit of 77 is a Role Playing Game set in the late 70s (77?).  It’s a cooperative experience as players work together to solve some of the most RIDICULOUS adventures you have every played.  Seriously.

Junkerman discovered Spirit of 77 at Isle of Games and was immediately smitten.  The idea that players take on the role of a 70s trope character sounded so funny!  Pick your favorite 70s TV show, and become that character!  70s cop?  70s martial artist?  70s Love Boat?  70s Fantasy Island?   Take your character and guide them through an adventure!

The RPG itself is fairly simple.   It reminds me a little of FATE as you have plot points and you have simple roles.  You can succeed on a role, succeed with a cost, fail with a minor cost or fail miserably (paraphrase).  The fun part of the game is that you can “offer” up to the DJ (Oh yes, the Gamemaster is called the DJ for reasons that will become apparent) thematic reasons why your roll failed.

“I try to help BigFoot because he’s on fire!  I (roll) and succeed … but with minor cost.”

“Umm, I succeed in putting BigFoot out, but my afro is on fire now!”

The BEST part of the game is when you fail miserably.  Because, you don’t know what will happen next!

One of the funnest parts of the game was that the Gamemaster, (I mean DJ), has a playlist for his adventure.  And this worked great and was very thematic.  As new events happen, the DJ would break out the next song (a 70s classic of course) and introduce the new event.

My favorite song: “Oh, that smell!” when we encountered the giant manure pile.

Junkerman’s main rule: things that could NEVER succeed in real life will succeed in the Spirit of 77 world.   A simple example: CC’s character had a mechanic follow him around.  After we went through the time warp in the land of the lost (really), we needed him.   Even though we NEVER said he came with us through the time warp, he just showed up … because.

And that’s the second rule: Given Choices, the Funniest One wins.  Our ethic in playing this game was  like the writer’s room for a comedy TV show: we were constantly trying to outdo each other and make each other laugh with ridiculous choices.  For example, we were given a chance to train BigFoot to do ONE complex thing.  What did we have him do?  Drive an AMC Pacer and jump 20 Ford Pintos in the Pacer.  Because it was funny (well, you had to be there I guess). 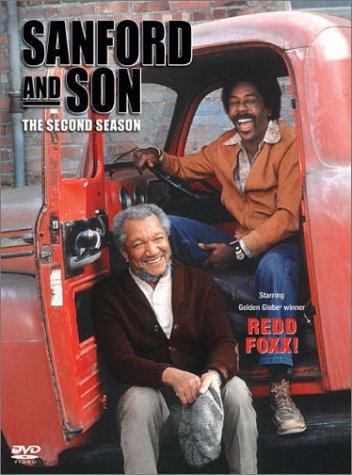 I grew up watching Sanford and Son the 70s TV show, so I thought it be fun to be Lamont Sanford, aka Son.   The premise would be that Lamont was trying to figure out how his father died.  And course, it was even funnier that Lamont was haunted by the ghost of his Dad who would show up and give him hints … “You Big Dummy!  You went through a warp gate!”

Our  last game ended when Bigfoot, whom we had befriended, was driving an AMC Pacer.  He had to break the top of the car so he could drive.  To win, we had to get Bigfoot to jump 20 cars (all Ford Pintos), while catching our other character in the air. Fireworks were going off in the background as Bigfoot jumped the pintos …

This is the most ridiculous game I have ever played!  And I have never had more fun.   As long as you have a group that doesn’t take itself too seriously, this can be the most fun RPG you have ever played.   We grew up in the 70s, and so maybe part of the fun was just making the 70s references.   But, we all had a great time.   This is a great cooperative game that is probably under your radar.