I was very excited when I found out Renegade was doing a cooperative deck-building game in the G.I. Joe universe!  As soon as I found out, I pre-ordered from the Renegade website and waited.  It just arrived yesterday November 27th, and I have been ecstatic to get this to the table!

(NOTE: I think you only get the BONUS box if you order directly from the Renegade Website). G.I. Joe: The Deck-building game is a cooperative deck-building game in the universe of G.I. Joe and plays 1-4 players for a game of 30-70 minutes.  After playing a few time, it’s pretty clear that the 30-minute gameplay is if you die horribly quickly! 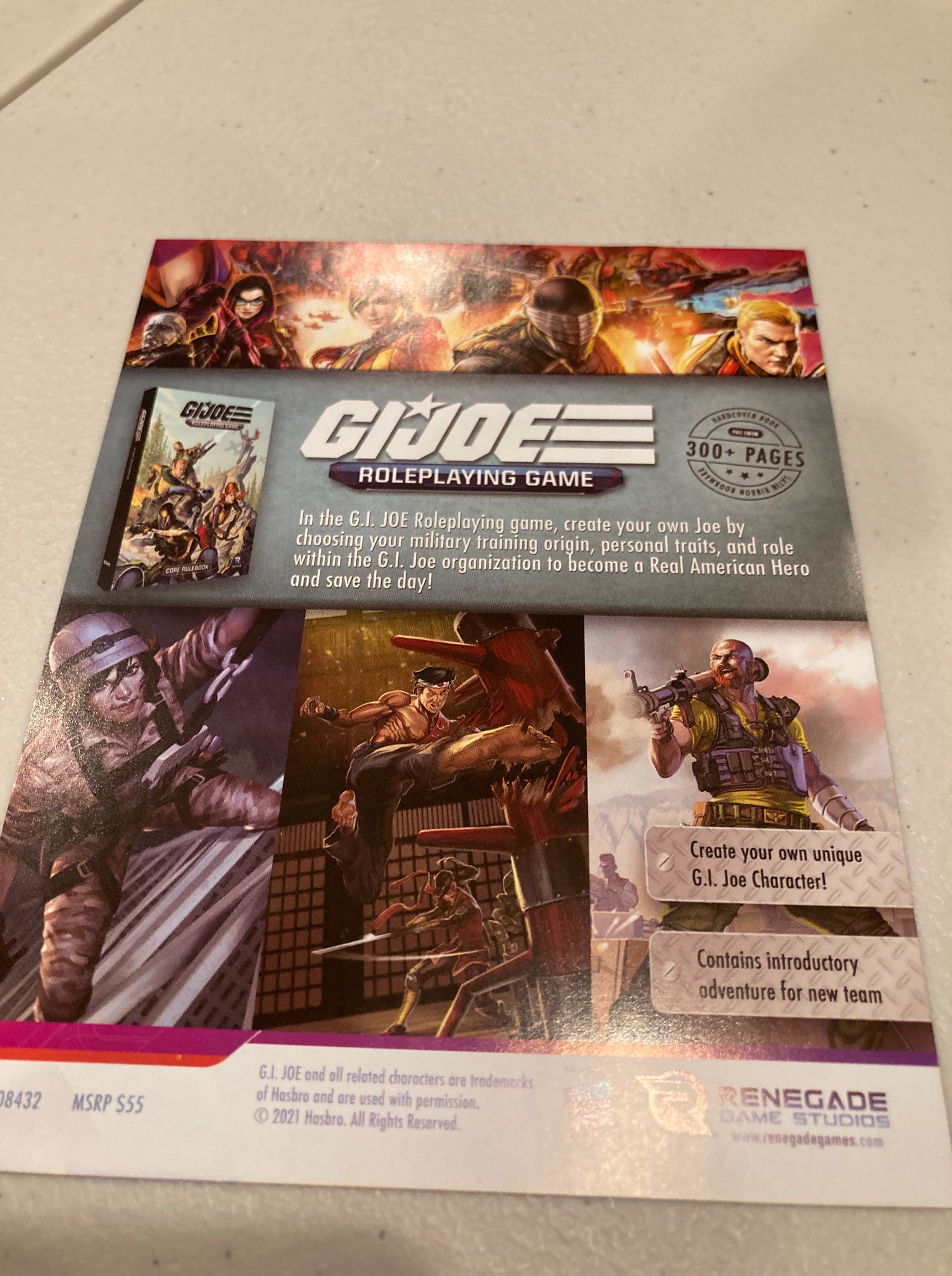 The rulebook is under that:

And then some nice cardboard tokens:

There are many flavors of cards.  Leaders are above: Note the keyword “leader”.

Mission Cards: these are the current “obstacle” to overcome.

Starter cards: the 10 cards that form your starting hand.

Complications: These are Bad News cards that attach to mission cards and make this mission harder. 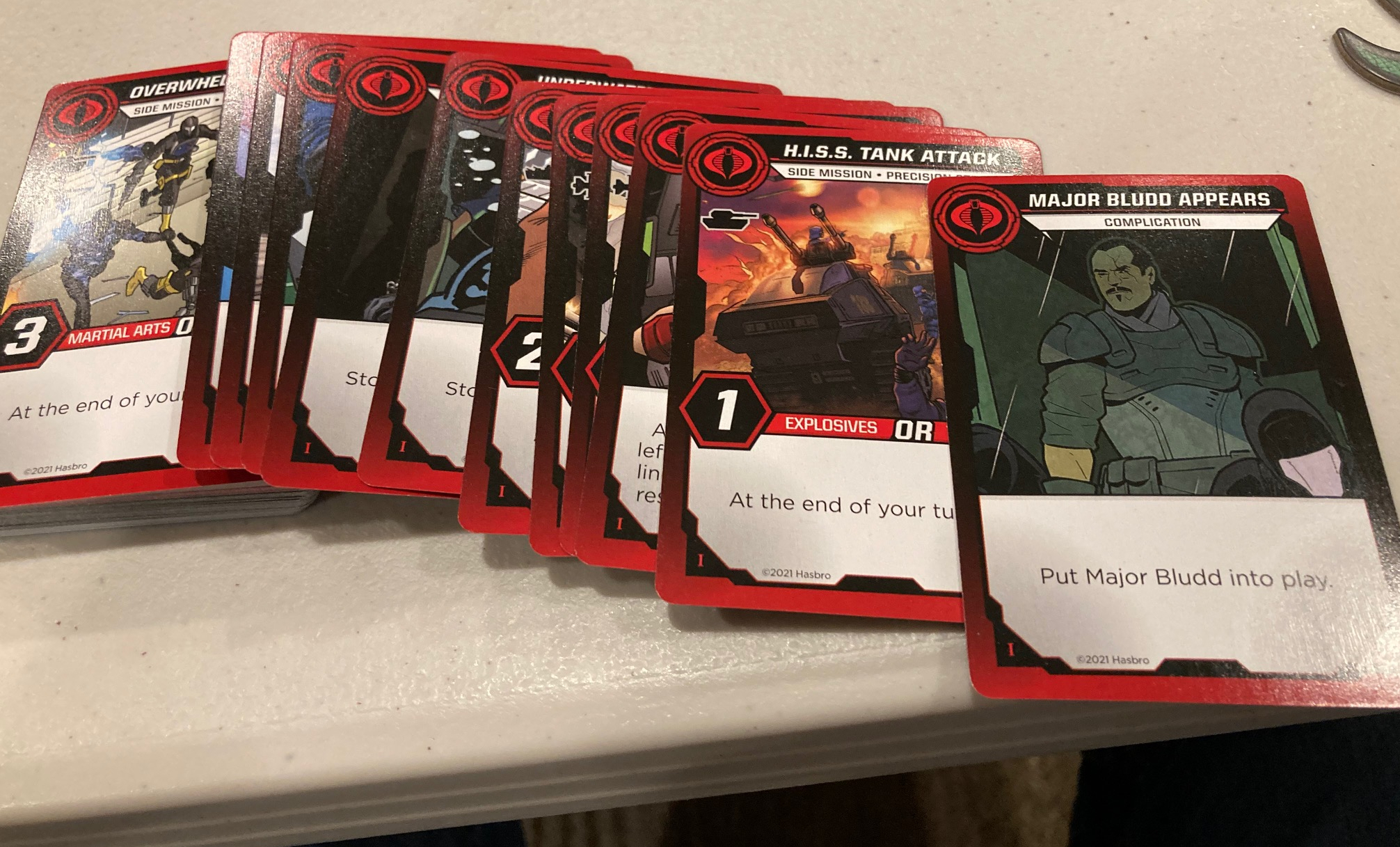 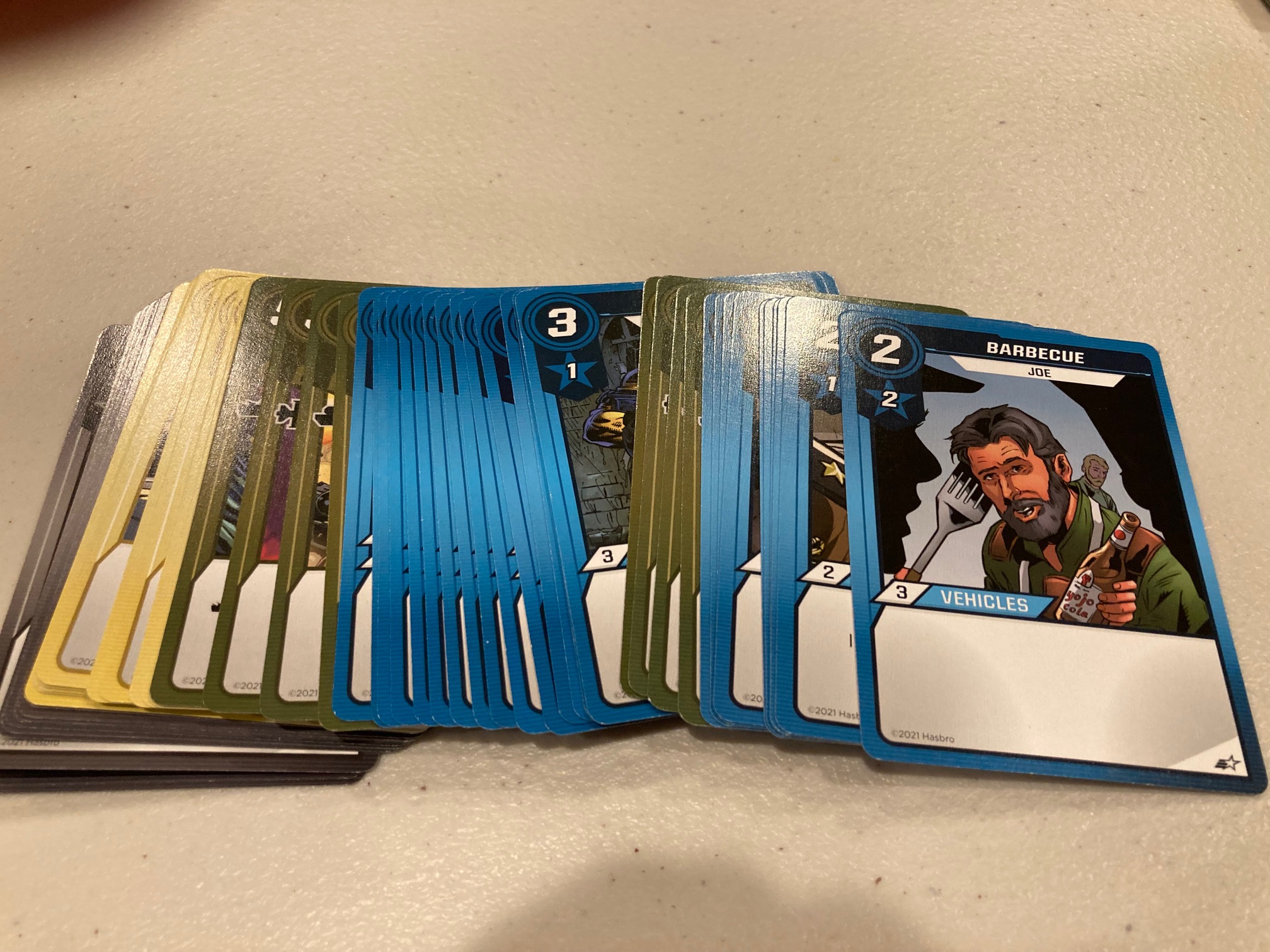 … and because this is a deck-builder, everything else is cards you can buy! (Note the the cost in the upper left).  Blue cards are Joes (soldiers), Green cards are Transport, Grey Cards are Gear, and Yellow Cards are Utility.

This game also has dice, because you only get success when you roll the stars!  The strength of card(s) is how many dice it buys: there’s no guaranteed success! 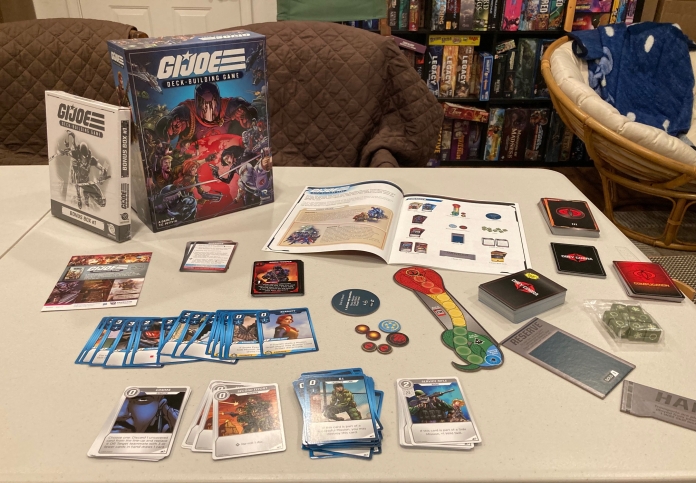 This game looks pretty good.  Some of the art on the cards was a little inconsistent, but in general, it looked pretty good.

This is a terrible rulebook.  It looks like it might be okay, but it’s really not.  I can’t tell you how many times I “GRRRed” as I read this rulebook: so many things are under-specified or poorly specified (see Problem section down below). 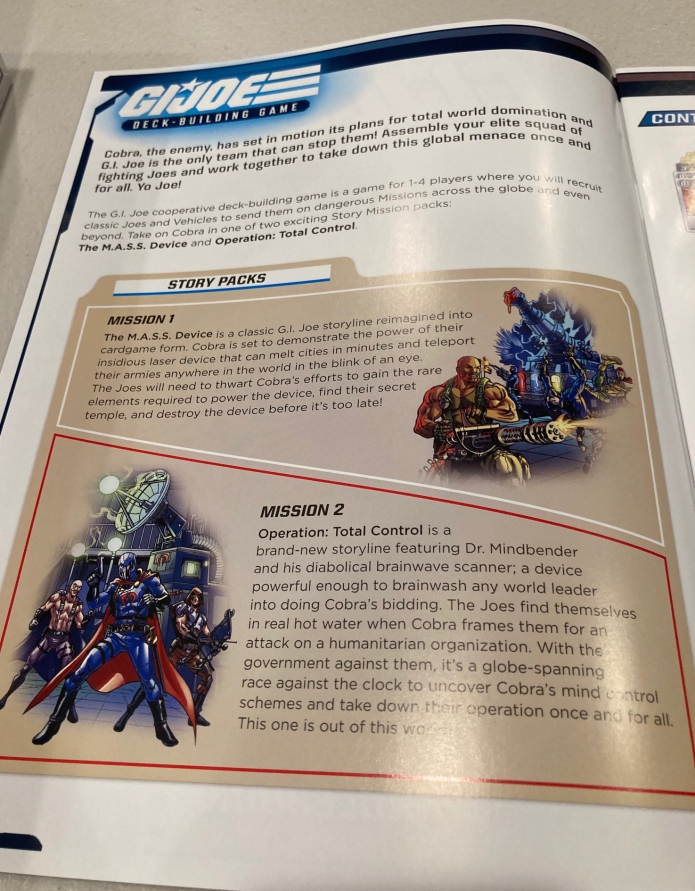 The game starts ok: there are (only) two missions that come with the game.  I think a  specialized training mission would have been useful.  There is “sorta” is a training scenario: you just play one of the missions with fewer Mission cards. 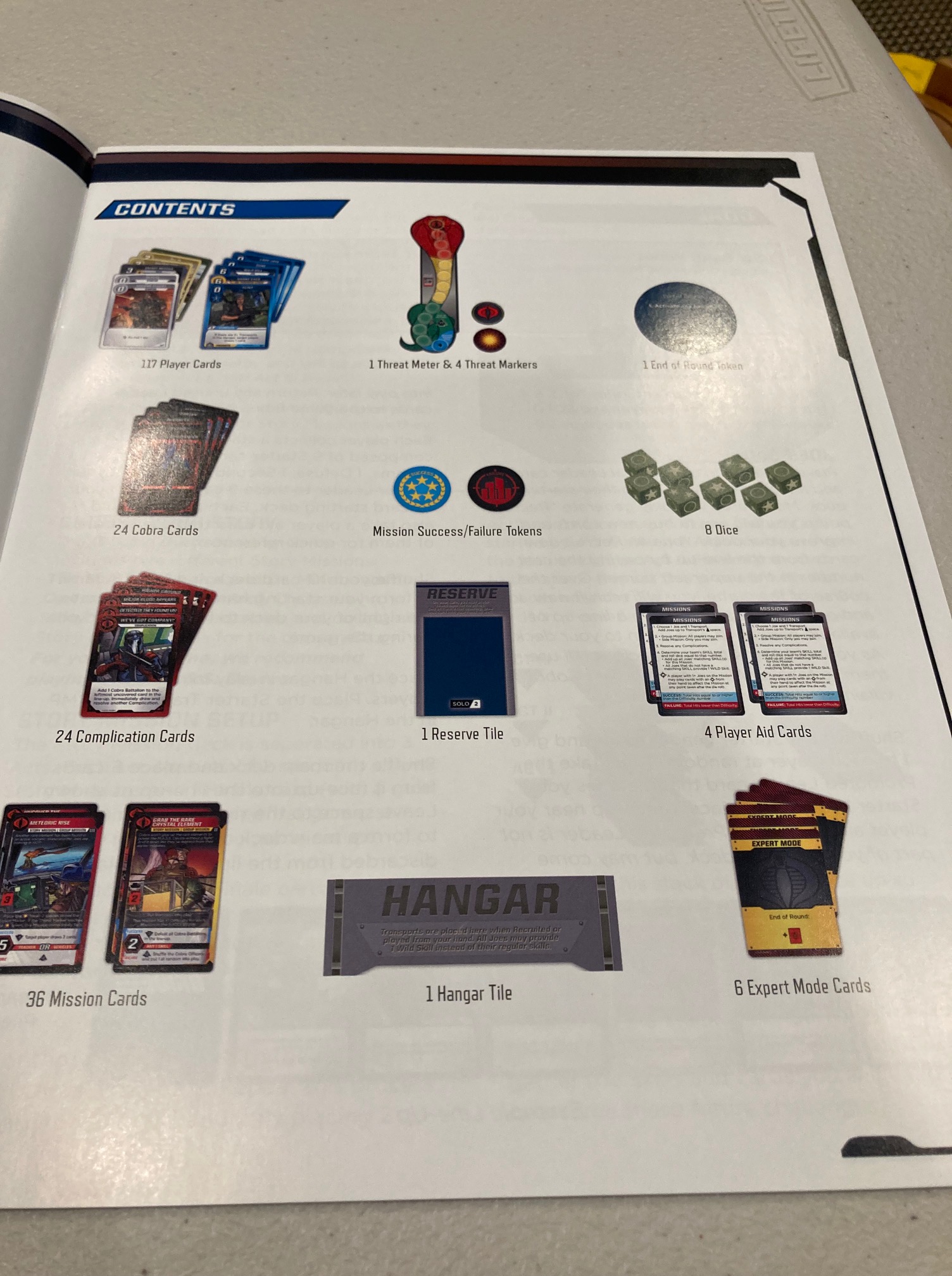 The components page is fine.

The set-up is a wall of text that’s poorly written.  This set-up don’t specify really what “any” of the cards are: you kind of have to guess what’s what.  They also don’t specify what to do with the Service Rifle cards (see Problems).  The next page is more text:

The Story Mission set-up is hard to get through.  And can I have an intro scenario?  Well, you can, but only after going to the next page:

The sample set-up should have been up front, opposite the actual set-up steps so you can correlate what’s in the picture with what’s on the opposite page.  A clear misstep!  And the practice game! THAT SHOULD BE THE FIRST THING THE SET-UP REFERS TO.   My first time playing is when I really want the clear set-up and practice game. 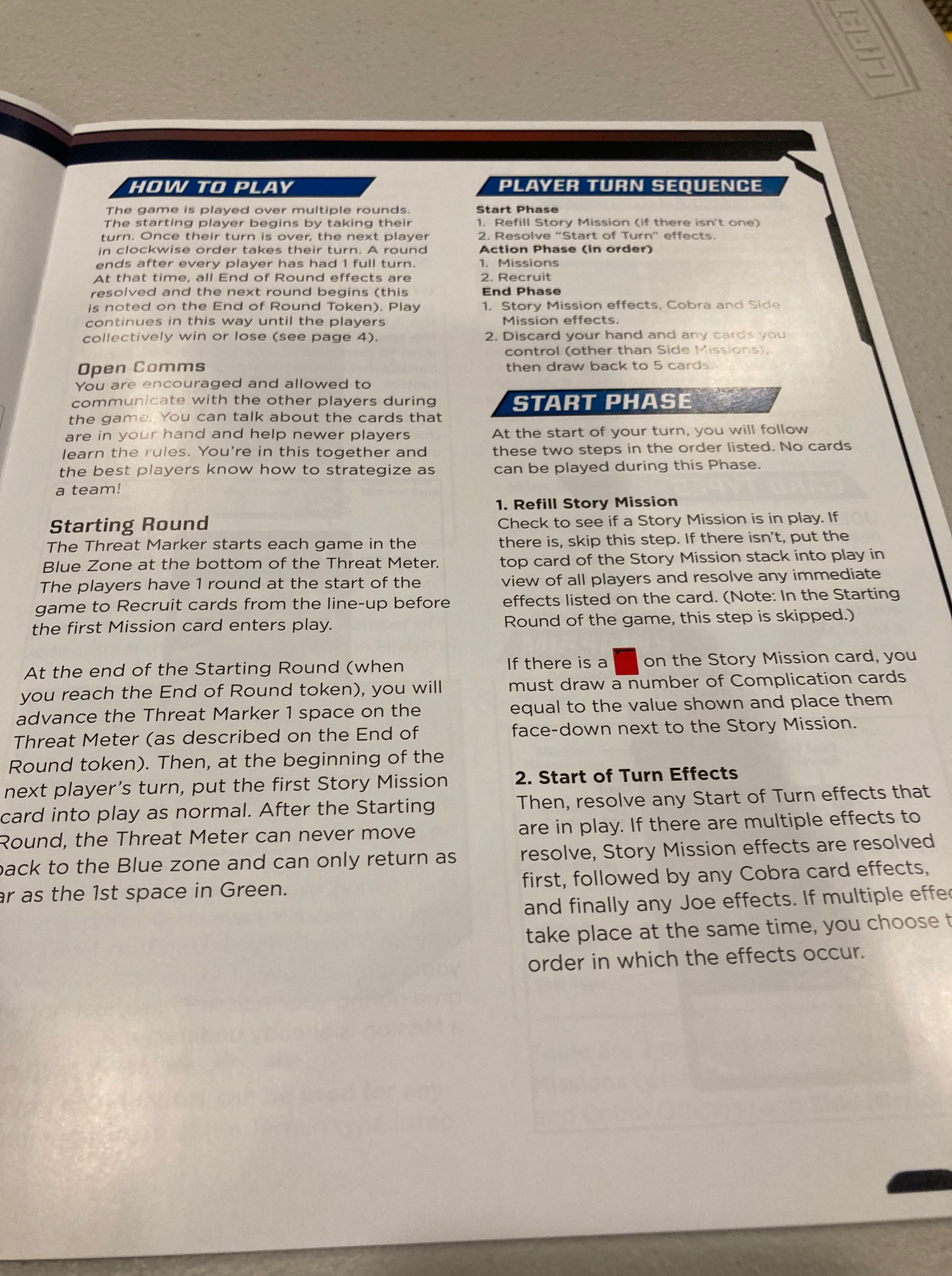 And the rulebook continues … a lot more text …

I can’t tell you how unhappy this rulebook made me.  I was able to learn the game … maybe.  I think I got the rules down, but I can’t be sure.  This was not a good rulebook.

So, Congratulations to G.I. Joe: The Deck-Building Game for following Saunders’ Law!  There is a very viable solo mode built in!  It’s not described up front, but near the end of the rulebook.

It’s a little messy, but not too bad.  I really like the idea that you can save a card in the solo game between rounds.   The solo mode is essentially the normal game, but the solo player gets to cycle through his deck twice as fast, taking two turns before the “bad news” hits. 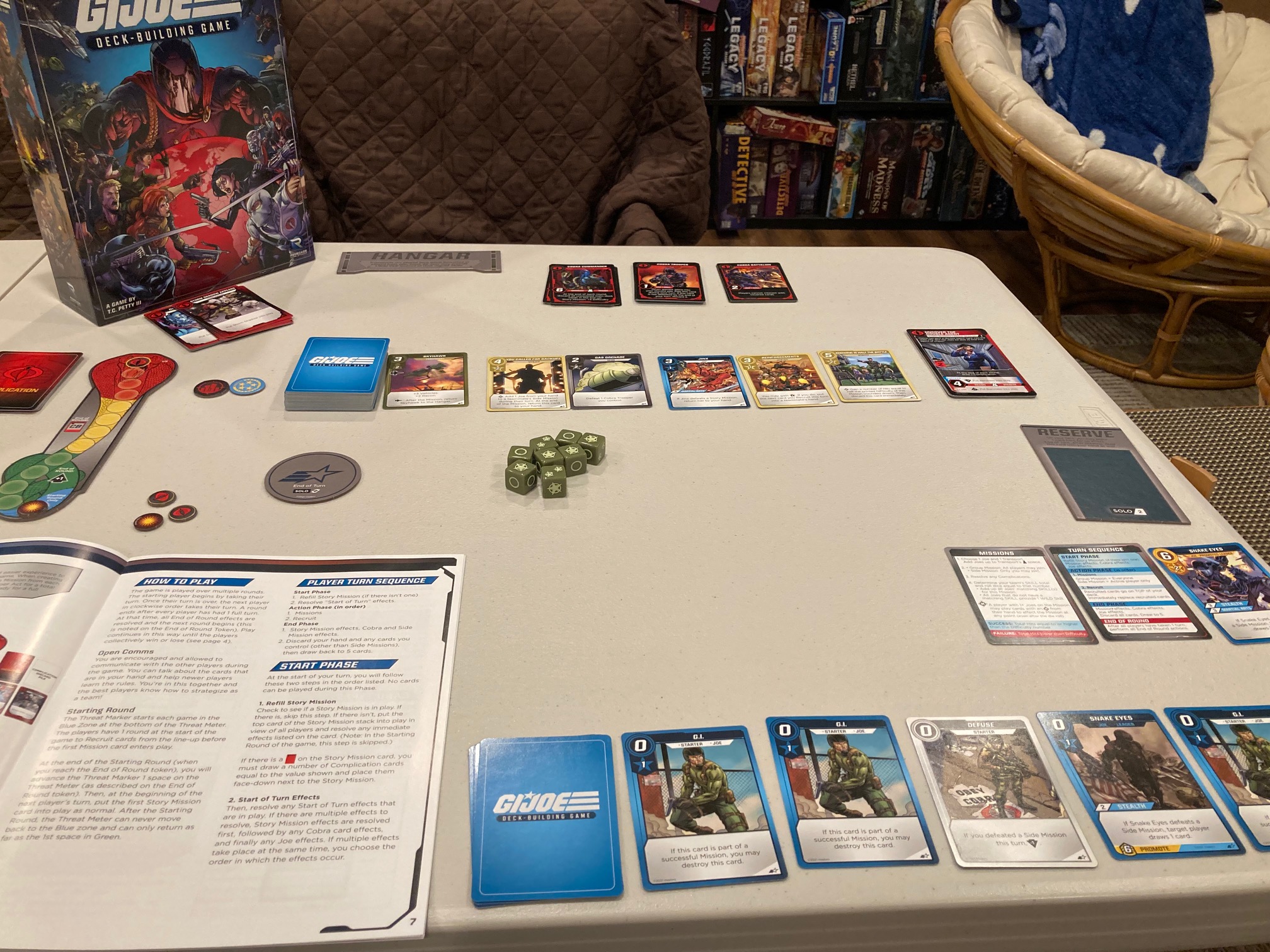 This solo mode is a decent way to learn the game.  The extra rules don’t  seem to get in the way of the main game flow.  However, I lost my solo game(s) pretty badly.  I am not sure if it’s well-balanced. 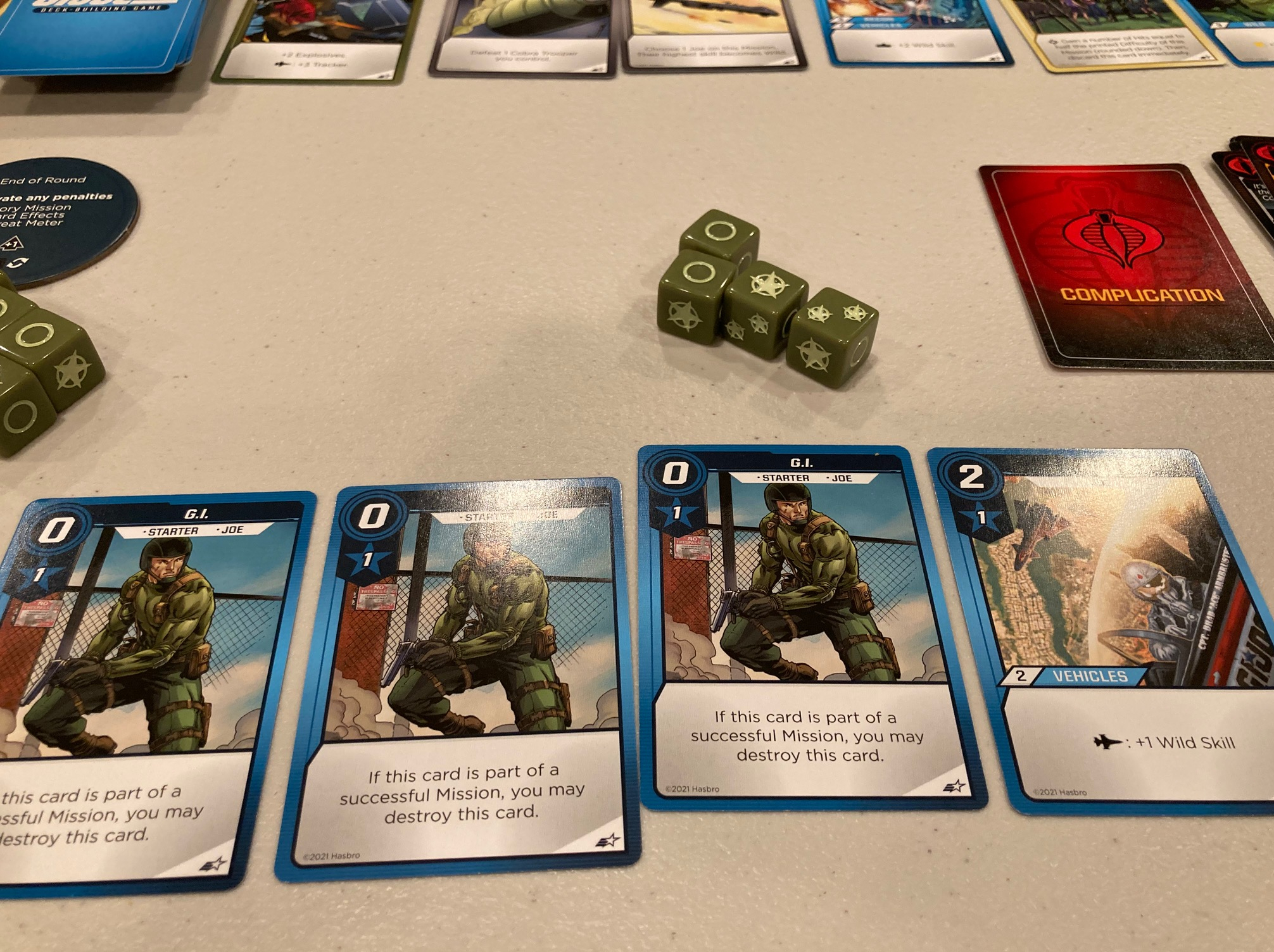 This is a standard deck-building game, where each player has a deck they wish to improve by buying better cards and culling lesser cards (there’s even a nice mechanism built-in to get rid of the Joes (see above)).

Like most deck-builders, it has an offering of 6 cards you can buy (see above).  But what makes this game unique?

To win, you must make it through to the final Mission and succeed!  See a sample Mission card above.

There are three ways to lose the game:

Usually, if you will lose, it will be because you ran out of time and the Threat Marker (see above) went all the way to the top.

You can play out-of-turn with certain cards to help your compatriots.  These are only cards that have a certain symbol though (a little target: see above).  Unfortunately, it not always: You can only play those cards if you committed a Joe to the Mission (yours or your compatriots).

You have to have a Transport to play cards: it’s an interesting idea that Joes must “travel” and get to a Mission using a Transport: But, Transports can only transport a limited number of Joes. 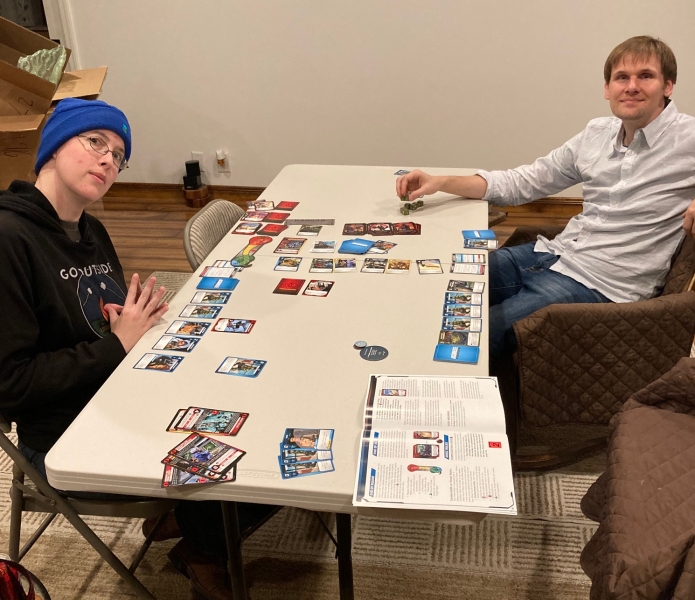 Cooperative play was much more interesting than solo play.  Some of the cards don’t make sense in solo play (the Comms cards is much less useful in the solo game unless you consider yourself a teammate), but the best thing about cooperative play is that anyone can help with your missions!

If your compatriots have a Joe (and you have room in your Transport), they can send their Joes on your mission (when it’s not your turn).  That seemed to be make the game more fun, as players talked and cooperated to try to defeat missions.

I didn’t like this game.  At all.  I said that this is deck-building game, but there seem to be too many rules and interactions on top of that:  Transports have special (but special rules for the jeep, different rules for other vehicles), Complications (but two different types, but how do Precision Strikes work?), So many Cobra Leaders, when do things happen, etc, etc, etc.

Maybe because the rulebook is so bad that I don’t feel like I can understand how to play! Maybe the game was too hard: but I played all my games on Practice mode which should have been simpler!  I lost every time on Practice mode because it was so hard!

RAM is cool .. until you realize you can only have 1 Joe on it …

I initially thought the Transport idea was cool (you need a Jeep or some Transport mechanism to get to a mission),  but all it did was limit what I could do on my turn (“Oh, I can maybe defeat a mission if I play all 5 of my Joes … oh, no I can’t, the Jeep only has room for 4 … so there’s no way I can win…”).  And then the Transport (unless it was the Jeep) would clog your deck until next turn.  Usually the extra oomph you might get from the Transport was mitigated by the fact that you usually could only send fewer Joes AND they clog up your deck (because when you draw them, they go to the hangar and you lose a card that turn):  We decided Transports are almost never worth it.

Other issues: I rolled very poorly in my first few games, and I just never had a chance once I started rolling badly.  (See a failed mission above … just barely failed).  The bad rolls just caught up with me too fast.  If you roll well, great!  This might be a great game!  But, the lack of dice mitigation really detracted from the gameplay.

I could do NOTHING on my turn because I drew no Joes!

I also had many turns where  I could “do nothing”: See above.  The cards just came out and all I could do was  watch the Threat Marker go up.  You HAVE to have Joes to play a Mission: we kind of came to realize that you should almost always buy Joes and ALMOST NOTHING ELSE because you can ONLY play other cards if you have Joes.

Another problem! There was very little choice in the game, as the Missions were linear:  You could ONLY do the Main Missions in order (see Main Missions above)  There was no branching, no choice, just take the next mission in the stack until you get to the end.  You could argue that Side Missions gave you some choice, but not really: it seemed like you ALWAYS would have to handle a side mission if you had one, and only the Main Mission if you had the resources.   The game was a little on rails.

This game has a significant number of problems, mostly in poor and under-documentation.

Those are just some of the things that were unclear from the games I/We played.

Venom Assault is a cooperative deck-building game that definitely feels like it’s in the G.I. Joe Universe.  The rumor is that Spyglass Games (the makers of Venom Assault) approached the owners of the G.I. Joe Intellectual Property to make a real G.I. Joe game … but were denied, so they made something that kind of looks like G.I Joe, but it distinct for legal purposes: that something is Venom Assault!

I grew up with the old-style G.I. Joe with the kung-fu grip, so I like G.I. Joe in general, but I have no allegiance to the cartoon at all: I think Venom Assault is better on every front unless you absolutely have to have Snake Eyes or your favorite G.I. Joe character.  Even then, I didn’t like GIJDBG.

I hated the G.I. Joe Deck-Building Game.  I thought I’d at least be able to say I enjoyed my plays of it, but after a miserable time getting through the rulebook, terrible set-up description, horrific gameplay description, gameplay that was far too random, and too many questions on gameplay,  I am not sure I ever want to play this again.  The solo game is really too hard, but the cooperative game is a little better: if you find yourself drawn to the game, definitely play it in a cooperative group. If you make me play this again, I will only play in a group with at least 3 people.

My group and I were pretty united on our rating of G.I. Joe Deck-Building Game: this is a 4/10.  Frankly, the poor rulebook was a major contributor to this rating: we can’t be sure we even played the right game.  This game needs some more refinement.  There is a really good game lurking in here, but the current incarnation isn’t it.

5 thoughts on “A Review of G.I. Joe: Deck-building Game”