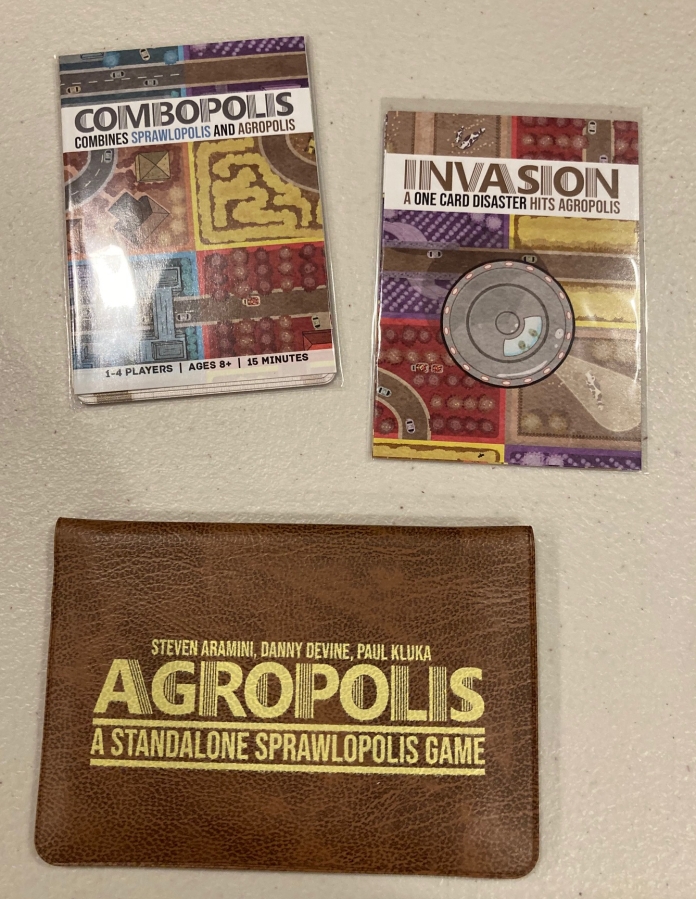 Agropolis was a cooperative game on Kickstarter back in October 2020. It delivered to me about 2 weeks ago (early May 2021). It had promised delivery Feb. 2021 and delivered in May 2021. That’s still pretty good for a Kickstarter.

Agropolis is a little 18-card game about building a rural town. It’s considered a micro game and both the expansions (Combopolis and Invasion) add another 8 or so cards altogether. The entire game and both expansions fit in a little plastic wallet (see above). Notice the soda can above (used for scale) to compare sizes! (You can also see how small the little envelope was that delivered the game!)

The game’s components are … a plastic wallet and 18 cards (and the 2 expansions which add another 10 or cards) and a rulebook. 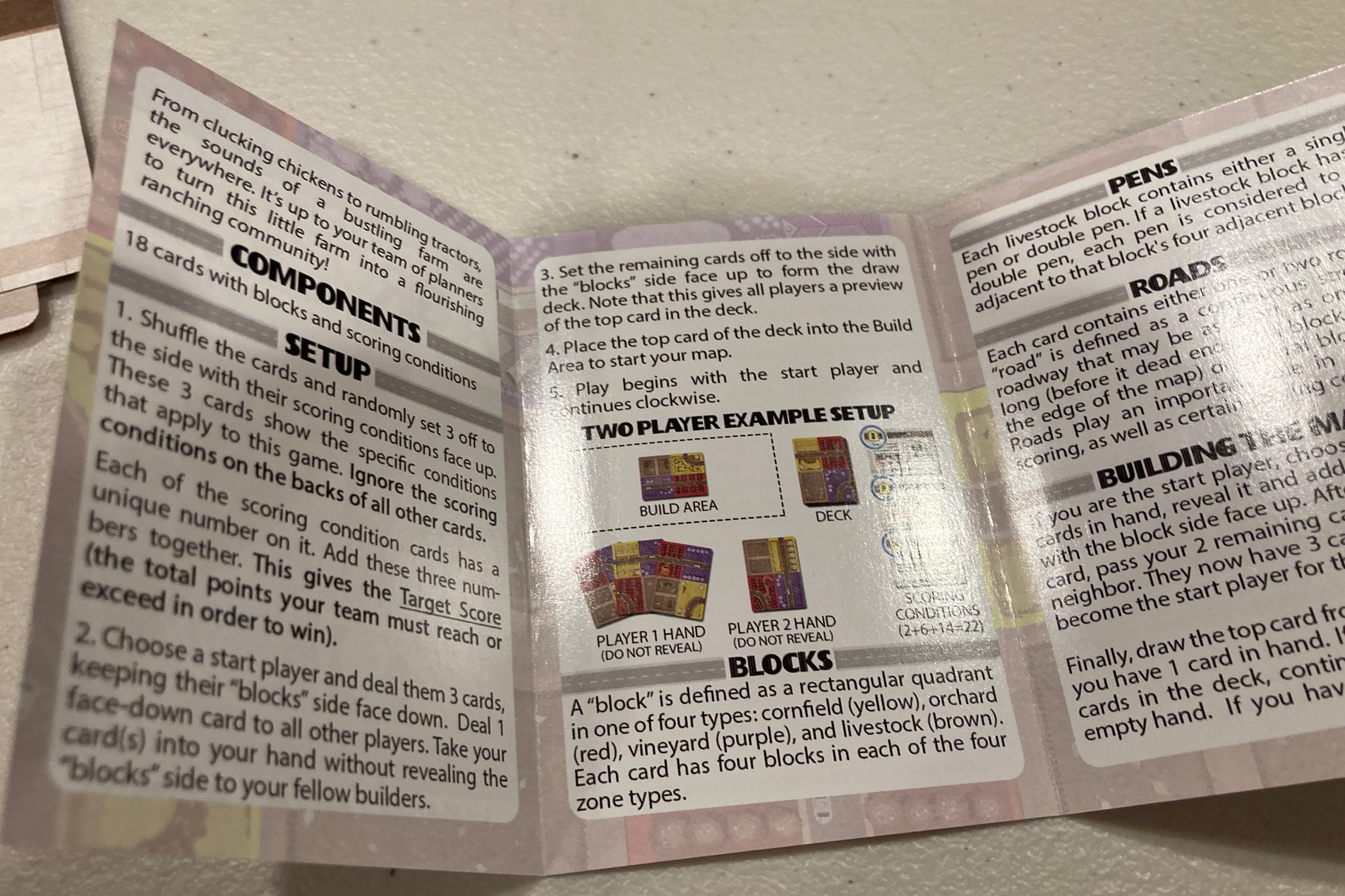 And … that’s it for components. You’ll notice the 18 cards have 2 very different sides: one side has a scoring condition (see 3 of them below):

And the other side has a 2×2 town grid (a “block”, see instructions) which consists of a cornfield (yellow), orchard (red), vineyard (purple) and livestock (brown).

You start the game with 3 scoring conditions/cards. Your jobs is then to build a rural town using the remaining 15 of the “block” cards. See below for a completed town. Note that the cards can only be placed horizontally (“long” ways): either of two long orientations is fine, you just can’t turn them vertical.

There are a couple of other placement rules (see below), but they are pretty simple. The rulebook pamphlet does a very nice job of describing the placement rules and then showing a good example on a teeny tiny page. Other rulebooks could learn a thing or two from this rulebook. It’s tiny, and yet it manages to convey gameplay and edge conditions very well!

Most of the rules for scoring are on the cards themselves, but there are a few other scoring conditions: See the relevant section from the rulebook below:

Usually when you are playing, the 3 main scoring cards tend to exert the most influence on your thinking, but the roads and largest group scoring rules are always in the back of your head.

For such a small game and even smaller rulebook, these components are great and easy to read. The rulebook is amazingly good considering how small it is! Other bigger rulebooks could learn a lot from this tiny pamphlet! I usually hate pamphlets as rulebooks, but this one does such a good job, I didn’t mind.

Set-up is easy: see the rulebook above and a sample solo set-up below. 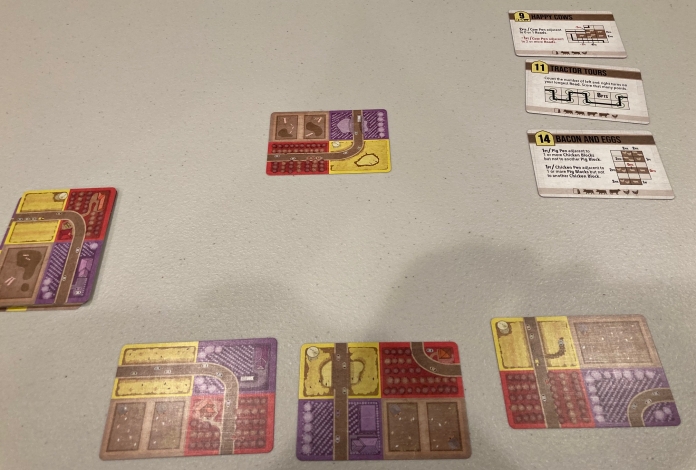 The win condition in Agropolis is a little wonky: it’s a “beat a score” condition.   From the three scoring cards you choose at the start of the game (see above), you add up the values in the upper left corner of scoring cards.  In the example above, you have 14 + 11 + 9 = 34.  In order to win, your  score at the end of the game MUST EQUAL OR EXCEED THAT VALUE.

The solo mode is well described in the rulebook.

Like we’ve said so many times before, it’s so much easier to teach your friends a game if there’s a solo mode to learn first (Saunders’ Law). In this case, the solo player takes three block cards (see below) at the start of the game (seeing the next block card coming out).

The solo player chooses a card to play, puts it in the grid (using placement rules we discussed earlier), then gets the next card on top of the deck. The game continues until all 15 cards are played (see below)! Then scoring happens: if you “beat the score” (which we described above), you win! Otherwise, you lose!

In the base game for multiple players, these three cards are “passed around” to the next player: the current player always should have three cards and other players should always have one card. 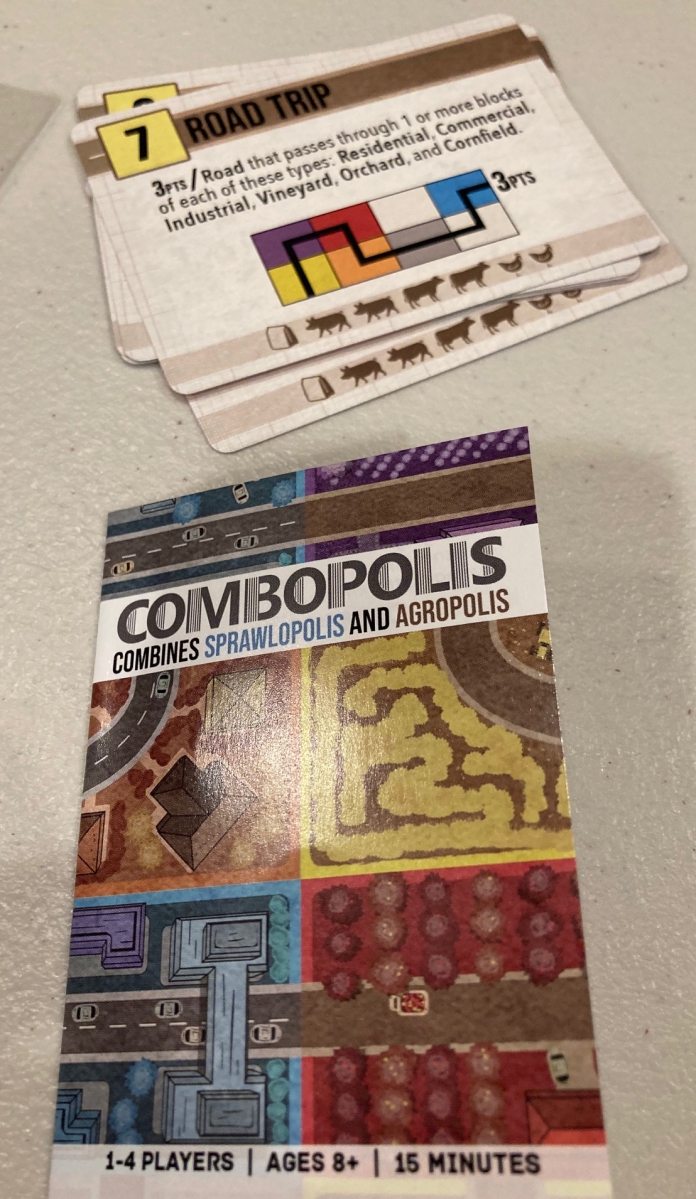 One of the expansions that came with my Agropolis Kickstarter was Combopolis: With just a few cards (6?), it’s a way to combine the original game Sprawlopolis and Agropolis ! If you have both games, you get kind of a weird game that combines the two!

The rules are pretty simple:

Note that the starting card is from Combopolis has both Sprawlopolis and Agropolis areas on it!!! (Card in the middle).

And then you score! You can only score 4 “biggest block” types (as there are 8 now between Sprawlopolis and Agropolis), but otherwise scoring and winning is just the same!

I enjoyed this mode: it makes the game twice as long, but I enjoyed combining the two games. I almost think I enjoyed it more that the base games! It really does add new life to your Agropolis and Sprawlopolis! 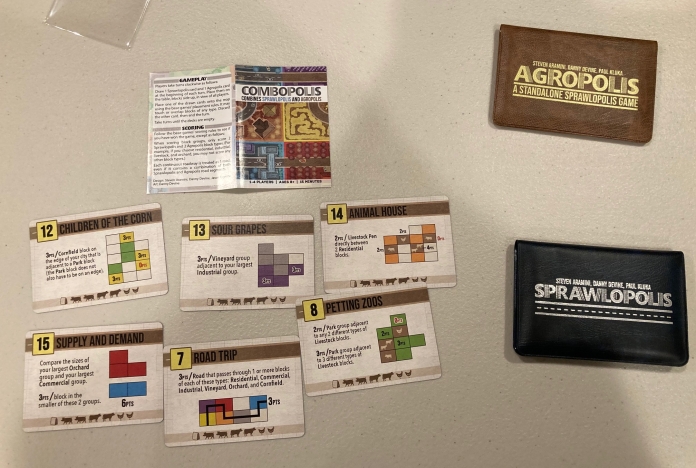 Are there any real differences between Sprawlopolis and Agropolis?  Not really?  They are essentially the same game except one set of rules: the livestock spaces!

If you like Sprawlopolis, you will like Agropolis! It’s basically the same game (modulo the livestock changes)! You get to build a little rural town and make lots of interesting decisions as you play. Every game is very different because of the scoring conditions: you get 3 very different combinations of scoring every time you play, and that really changes how the game flows. Agropolis is a fun little cooperative game with lots of gameplay, but I think it works better as a solo game than as a proper cooperative game. But, it’s still good as a cooperative game.

Do you need both Sprawlopolis and Agropolis? Probably not. The games are so similar, it’s not really a necessity. If you have one, you probably don’t need the other unless you really loooove the game! I will say that the Combopolis expansion which combines the two might be my favorite way of playing the games together.

If you don’t have either Sprawlopolis or Agropolis, and a little building game sounds like fun, you should pick one of them up! They are both super cheap ($10?), super easy to carry around, and super easy to teach. I would say, choose the theme that appeals to you! “Build a city? Choose Sprawlopolis! Build a rural town? Choose Agropolis!” Honestly, the theme isn’t that deep and you won’t go wrong choosing either one.

4 thoughts on “A Review of Agropolis”