I picked up Star Trek: Frontiers sometime ago: It came out in 2016 and my friend Josh and I have been “meaning” to play it for almost 2.5 years now!  We even had a sign-up for it at the first RichieCon in  2017,  but for whatever reason, it got dropped on the floor (not literally).  I decided to get it out this weekend and give it a try.   I don’t know why!  I think because it was at the bottom of a pile of games, and I was afraid it was going to get smooshed …

So, Star Trek: Frontiers is a re-skin of the big hit Mage Knight.  Mage Knight is a fully cooperative game (sorta) in which Knights work together to take down big bosses in a fantasy world.  Star Trek: Frontiers (STF) is all about the (newer) Star Trek universe … mostly a Deep Space 9 universe.   In STF, you can play Captain Cisco (from DS9) piloting the Defiant, Jean-Luc Picard (from Star Trek: The next Generation) piloting the Enterprise, General Martok (Klingon General from DS9), or Lursa and B’Etor (the Klingon sisters from both TNG  and DS9).  Choose a ship!

If you like the later Star Trek (DS9 and TNG), this theme is just for you.

So Star Trek: Frontiers is a fully cooperative game … mostly.  Sometime ago, I played Mage Knight and noticed it’s a different “flavor” of cooperative, which we dubbed Cartman Cooperative.  This is where each character tends to “do what they want”: it represents a fragile alliance of characters.    Think Gloomhaven or Legendary, where all players are working together (and they have to to win), but in the end, there’s some notions of victory (victory points, loot).  To be clear, Cartman Cooperative  is NOT semi-coop!  It’s still fully cooperative, but (notionally) each player is more independent.  Honestly, this depend on your group! We play Legendary (ignoring the victory points) and Gloomhaven (changing the loot rules) fully cooperatively: It’s easy to play Star Trek: Frontiers completely cooperatively as well.  Having said that, the Cartman Cooperative notion is very thematic: the alliance between the Klingons and the Federation are fragile, and even within the Federation and The Klingon Empire, alliances can be tense.

Are there solo rules (i.e., Saunders’ Law) ?  Yes and No.  The main walkthough makes you play 2-4 players, but it refers to the solo scenario (above). So, there are solo rules, but they are very much outside the main rule set.  This is hard to deal with because the main walkthrough is SO DENSE WITH RULES.  The last thing you want are “auxiliary” rules  which requires to play a second “dummy” character.

The components are pretty nice.  Each player gets a ship (I, of course, chose the Defiant with Cisco commanding) and it’s a nice little mini ship.

There are a LOT of components, and the game just BARELY FITS in the box.

The Borg cubes (which you don’t fight in your first game) are pretty cool. 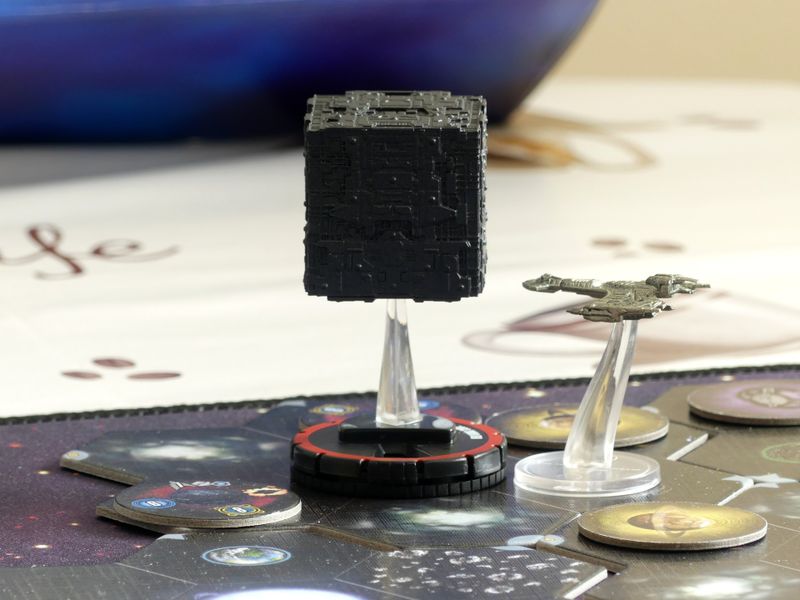 I like the components a lot, but a lot of them are a little dark!  The printing seems just a little darker than it should be?  Sometimes they were hard to read and distinguish.

The cards have screen captures from the show: you will either love this or hate it!

In the end, I enjoyed all the screen caps (“I think that’s from that DS9 episode where they fought the Dominion!”) and thought they were very thematic.  I do know some people tend NOT to like them.  Caveat Emptor.

Overall, I liked the game components.

Like Mage Knight, Star Trek: Frontiers is a very heavy game with both a Game Walkthough (see above) and a Full Rulebook (see below).  To ease you into the rules, the walkthough introduces most of the rules very piecemeal as you play (so you don’t have to capture all the rules right up front).  Honestly, this a great way to learn the game. Frankly, because of the complexity, you almost HAVE to learn the game this way!  This game has a LOT of rules!

The Walkthough is quite good.  Like all good rulebooks, it shows you what the game looks like all set-up:

The one thing it DOESN’T do is give you a components list!  There are a LOT of components in this game, and I felt like a page with a list of components would have gone a loooong way towards helping you  get familiar with the game.   Basically, as you read the rules, you have to go hunting through the components to find what you want.  There’s a mental disconnect there: I have to switch between “search the components” and “learn the rules”, which can be a bit jarring with so many components.  This is no way a deal-breaker, but it seems more like a missed opportunity.

The font also seems very small in both books.   Arguably, it allows you to keep “concepts” strictly on a page (so I get that), but I am in the camp that prefers larger fonts.  My opinion.

Introduce Concepts As You Play!

The main thing the walkthrough does exceptionally: it introduce rulesets AS YOU PLAY.  This works exceptionally well.  There’s both a rules section JUST for that entity/ruleset and a summary card.   For example, the first time you encounter a Class-M planet, there are rules in the Walkthough (luckily, in the order you expect to encounter them as you play) and a Summary card (see above).

I likened this to having to “swap disks” when playing a computer game (for those of you who remember swapping disks for adventure games):  a new landscape comes out, and you have to change disks!

Regardless, this concept worked REALLY WELL: introduce concepts as you go: you only need to read the new rule section when you get there.  For my first play, I only glanced at the real Rulebook once or twice: my head was in the Walkthough most of the time.  When I DID look at the rulebook, it seemed fairly well organized.

On my first play, I was able to get through and find the Borg ship!! Once you find the Borg Ship, the Walkthough is over.  Along the way, I fought Romulans, beamed down an away team, took over a Dominion space station, gathered some new Crew for my ship and Space Stations and planets, and even delved into “Unknown Technology”.    It was really fun!

At the end of the day, Star Trek: Frontiers has a lot of deck-building with hex-and-counter combat/movement.  There’s also a little bit of resource gathering.  But, many of the cool things you get in the game are cards that go to your hand: deck-building seems to take center stage!  Advancing your rank?  Get a new Advanced Action Card for your deck!  New Technology?  To your deck!  New crewman? To your deck!  But the way you handle each of those things is very different!  The notion of combat is still very important to the game: you fight Romulons, Borg, and Dominion … and you HAVE to if you want to level up so you can actually have a chance against the final BIG BOSS.

Level Up As You Play!

As you play, you are either upping you experience, deck-building, or gathering resources!  The experience board (see upper right picture) tracks your experience, and when you get enough, you either get a new card and token or a new skill (upper right).  (You can also up your hand limit when you get experience).   You can deck-build by visiting all the locations in the galaxy and recruit crew/tech/actions to your deck. 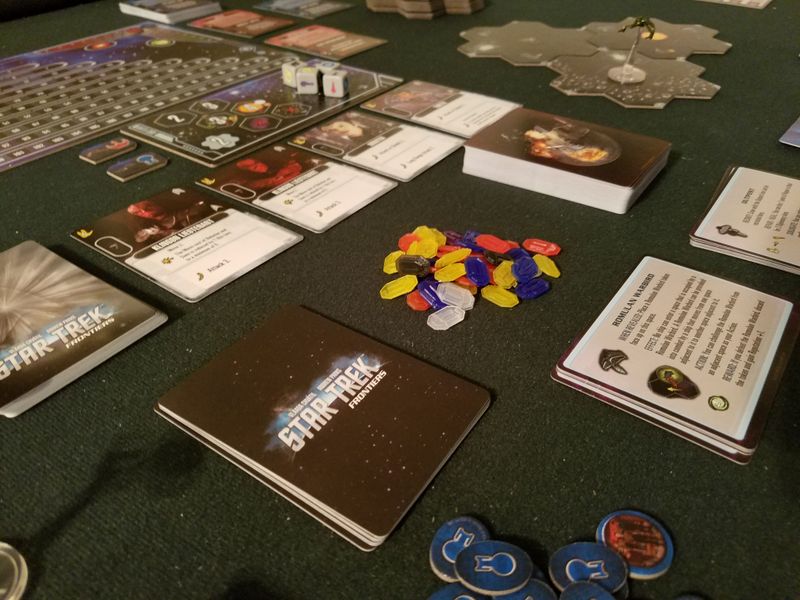 You can also gather resources (aka data tokens/crystals, the colored tokens above) to help you power your cards.  Every card in the game has basic action and an advanced:

In the example above, if you spend a blue data token, you can get MOVE 4 instead of the base MOVE 2.

In the end, I won!  I found the Borg Ship.  As you can see, there are a LOT of components.  And there are a LOT of rules.  I actually ended up playing this game over two days!  On Saturday, I set-up and ran through a few turns.   Honestly, I was pretty overwhelmed on the set-up and I just had to put the game down—it was too much for one full sitting!  I came back the next day and finished my game.  It probably took 6 hours from start to finish (including set-up).  It’s hard to separate the set-up and play time because of the “learn as you go” nature of the walkthrough.

There are a lot of rules.  I know I’ve said that a number of times, but you need to understand what you are getting yourself into if you play this game: Lots of rules, dense rulebook, lots of components.

At the end of the day (well, at the end of the second day), I had fun!  It was thematic, the game felt like a Star Trek game (even though I know it’s a Mage Knight reskin), and I really enjoyed all the decisions.

Weirdly, even though I like the Star Trek game better, I feel like the Mage Knight game has better components.  The Star Trek box is “weird”:

It feels “cheap” with the fold-up corners, versus the “real box” of Mage Knight.  Also, the cards and components of the original game seem slightly better.

I have played Mage Knight, but it’s been a while.   My understanding is that the Diplomacy is new in Star Trek: Frontiers (and not in Mage Knight).  In my follow on review, I will explore this some more.

Of all the Star Treks, Deep Space 9 was my favorite.  It reminds me of a time when life was simpler. In Grad School,  me and some friends would get together with and watch Star Trek (both TNG and DS9).   Good times.

This game really has embraced the Star Trek theme!   Especially the Deep Space 9 Star Trek! And I think that theme permeates the game. Star Trek: Frontiers is a good game (well, duh, it’s basically Mage Knight).  I think I would actually prefer Star Trek: Frontiers to Mage Knight because of the theme.    But, this is just based on my first solo play of the base game.  I need to get this to the table with some friends.  Stay Tuned!  (Let’s see if I can get my friend to look at the rulebook beforehand …  “I have to read HOW many pages of rules before we play???”)