Raid Boss is a cooperative board game from Kickstarter that I backed in May 2019. It promised delivery in February 2020, but it didn’t deliver until just now (February 2021). Again, COVID-19 and the “Kickstarter effect” are probably to blame for a lot of the delay.

Raid Boss is a cooperative dice and battle game for 1-4 players. Recall that it did make the #10 position on our Top 10 Anticipated Cooperative Games of 2021!   There are three main reasons I backed this game:

Let’s take a look at Raid Boss and see what we think!

Raid Boss didn’t really come with a lot of Kickstarter extras: All that really came in my delivery was the box itself (see above).  Note the picture on the side of the lid (above) REALLY reminds of Art Adams: compare this to a picture of Spiral and Longshot: 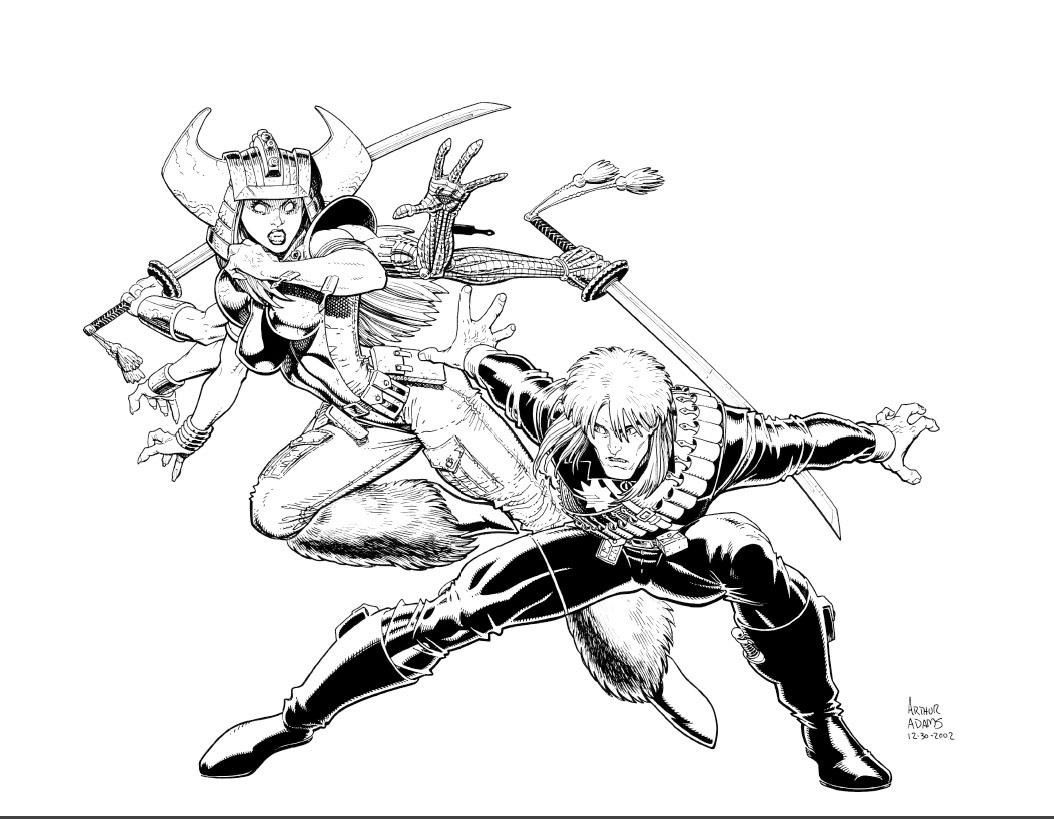 I think that’s why the game may have spoke to me so much. Let’s take a look at what’s inside the box:

The inside of the lid is an homage to some of the bigger Kickstarter backers (I was not in that tier).

The rulebook is the first thing you see and full of more of the art!

The main enemy board comes next (see above) along with some Hero cards (see below).

The main cardboard bits are all above. They all look very nice.

The main boards of the game are the HERO boards (see above).  There are 12 of these, giving the players a lot of choice (see below).

The boss boards are in the same pack (see below): these are the big bad bosses the players are fighting cooperatively!

It’s a little hard to see, but these cards are all laminated! I’ll be honest, I can’t remember the last time I saw a game with laminated cards. It seemed to work okay, but I’ve already found two cards that are sort of coming apart, so I am nervous this will be an issue in the future.

Inside the box are some dice (above right) and some cards and other plastic tokens (above left). There are a lot of dice because, at the end of the day, this is a dice-chucking game.

There is one Boss deck for each Boss in the game and a few reference cards.  That’s it for the cards: the bad guys each get a deck but the Heroes do not.

The art is nice and the cards are very readable (see above). Each deck has a little bit of unique art, but a lot of the pictures are repeated (see below).

Stats in the game are notated with little plastic sliders (see above): Skills and Hit points.

Like I said, this is a dice game: there’s a lot of dice (see above) but they are kind of smallish dice.

Like I said, one of the reasons I backed this game was the art: The artist’s (Dane Miner) style is all through out this game and I really think it is very evocative of a comic book ethos.

In general, I like the components.  The only real concern is the laminated cards: will they be an issue in the future?  I don’t know.

In general, the rulebook is a little long and has a lot of rules, but it’s fairly readable.

The game starts with a nice graphical list of all components: Thank you!  I was able to correlate names and all the tokens on the first few pages.   I don’t think I can underestimate how important a list like this is: if I can see all the components listed and physically correlated, it gives me confidence that the rulebook will be good enough.  This first few pages gave me confidence!

(Some flavor test to start the game …)

The next thing I expect is a Set-up … and that’s what I get.  See the picture above.  It does a pretty good job of getting you set-up for your first game.

The game starts to get a little text-heavy after this (see above), but it’s still setting up a few more things in the game.  This wasn’t great, but we started on a good note, so I’d forgive this (it needs perhaps some more pictures above).

There’s little summaries of all the cards (above and below) to help you get a sense of everything that’s there.

I felt like I was able to read the rulebook and get going. It worked pretty well. The rulebook is long and sometimes it’s hard to find the rule you needed, but the rulebook looked good and the first few sections gave me enough confidence to jump into the game.

So, the game has solo rules (congratulations on following Saunders’ Law)! The basic premise is that you ALWAYS play with 4 heroes (see above) regardless of the player count. In a 2-Player game, each player would get 2 Heroes each! In a 4-Player games, each players gets 1 Hero each! So, in a solo game, you have to play ALL FOUR HEROES! Whew! Each player has a lot of unique powers and triggers, so keeping track of all this can become quite daunting.

My first game spanned a number of nights and probably took 3-4 hours total. Some of that was because this was a learning game, but I was halfway through killing the bad guy when I died! Had I survived, I think I would have taken another 1-2 hours to play.

What Is This Game?

If I had to describe this game to someone, I’d say it’s cooperative Dice Throne (see review here) meets Batman: The Animated Series – Gotham Under Siege (it’s made several lists here on Co-op Gestalt: see the Top 10 Cooperative Dice Games). It has the same “beat up something” that permeates Dice Throne, but the activation of abilities (with 6-sided dice) and overall environment feels like Gotham Under Siege.

Players battle the Big Boss and slowly get more dice: about every “10 hit points” you do, another dice is released to any Hero player you like (players start with 2 dice each and should have 4 by game end).

At the end of the day, this is a “beat-up the boss and don’t die” game. Each player has a certain number of hit points AND EVEN IF YOU GO TO ZERO, it’s very easy to bring back your character! Someone just has to spend their “instant” power!!! BUT: If this happens too many times (3 KOs, see below), the Heroes lose.

You win if you can bring the Big Bad to 0 Hit points. There’s some cool little things that happen near the end game: once you are just about to defeat the big bad, you get his “Last Stand” card.

At the end of the day, this is cooperative dice-chucking game with variable powers. It’s important to work together, and there is some strategy, but … it’s a dice-chucker.

Even though Raid Boss is a dice-chucker, there is some strategy. For example: the Positions of your Heroes (see above) can make a differemce. Your Heroes move around in Positions 1 – 4 as you play, and you control where they go! A lot of powers are actually related to the position you are in, and a lot of the bad guys deal damage related to your position. So, as you play, you may want to put the healer up front so he can heal everybody before they fight, or you may put the damage dealer at the end because he gets damage based on his position …

Other choices you make are: which powers to activate? (Do I help myself or my comrades?) Which Heroes do I choose for my team? When do I use my instant power? (You only get it once per turn) There’s enough choices in the game that there is some strategy, but … it it still just a dice-chucker.

So, I enjoyed my first play (even though I lost), but I felt like the game outstayed it’s welcome just a little. I think some of that is just unfamiliarity with the game, and I hope to get it to my game group this week to try it again. I will also say the solo play of operating 4 Heroes was rough. It worked “okay” in Set A Watch (see review here), but it still felt like too much work and Set A Watch is a much simpler dice game. It could be that the long game time was because there was so much context switch back and forth between heroes? I think it would have really behooved the game to have a solo mode with ONLY 2 Heroes. Right now, I am not sure I want to play the solo again .. it was so much work! Of course, Sentinels of the Multiverse had this problem as well (you have to play 3-4 Heroes to play solo) and once you learned the game, the Sentinels of the Multiverse solo mode was okay. Let’s see how I feel after a few more plays.

I like Raid Boss: it seems like a decent cooperative dice game. The art is fantastic (if you like the comic-booky art of the this world: you know if you do or not) and this art permeates the game. The components are nice, but I do worry about the longtime viability of the laminated cards. The game is good and has some good cooperative strategy underneath it’s dicey veneer. Unfortunately,the game length seems just a little bit longer than it should be, and I wish it had a better solo mode.

5 thoughts on “A Review of Raid Boss: Part I. Unboxing, Solo Play, and First Impressions”