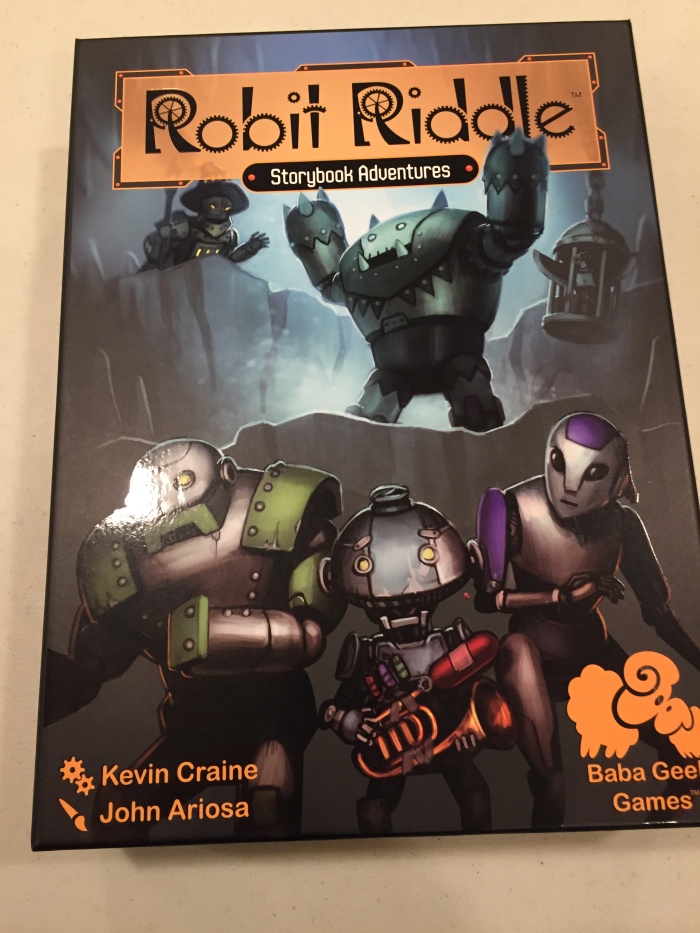 I received Robit Riddle from Kickstarter about a month ago.  I just got it to the table last night.  It’s a cooperative story-telling game for 1-6 players, based in a universe where we are robots! In this universe, our Robits (pets) have disappeared, and we are working together to try and find them.

The ages listed on the box are 8+, and that seems apropos.  The game seems aimed at younger kids: I almost felt like it could have gone down to 7. 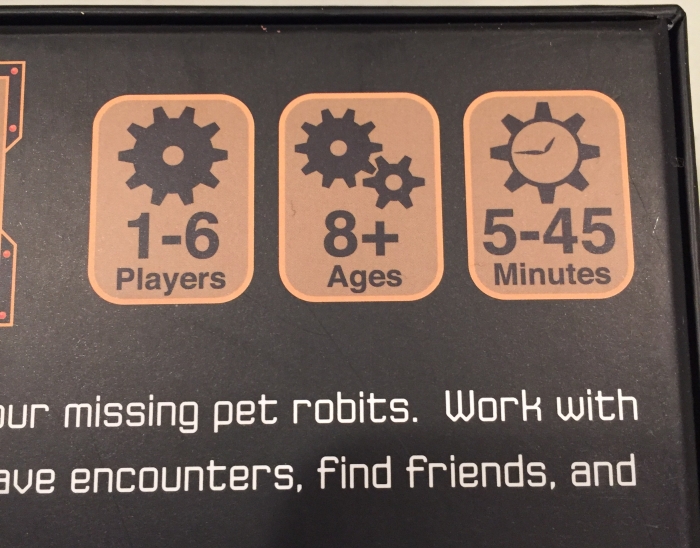 What’s In the Box? 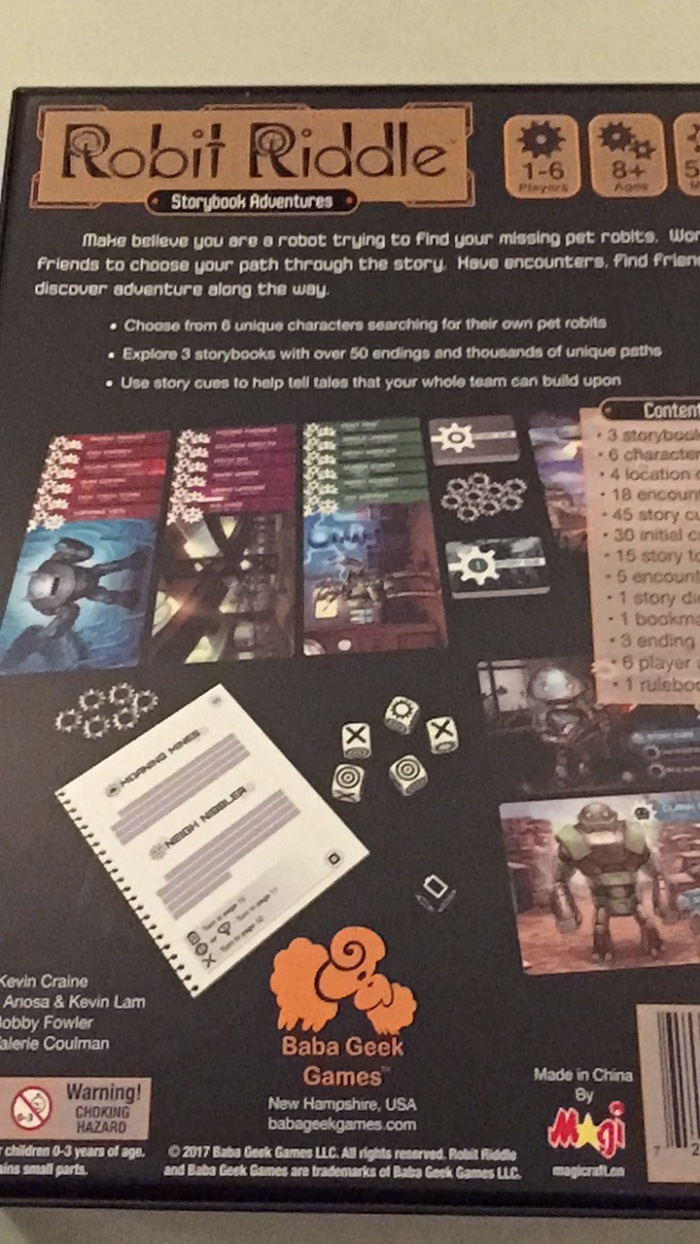 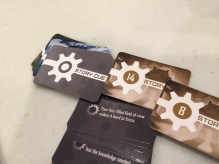 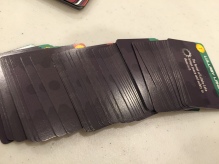 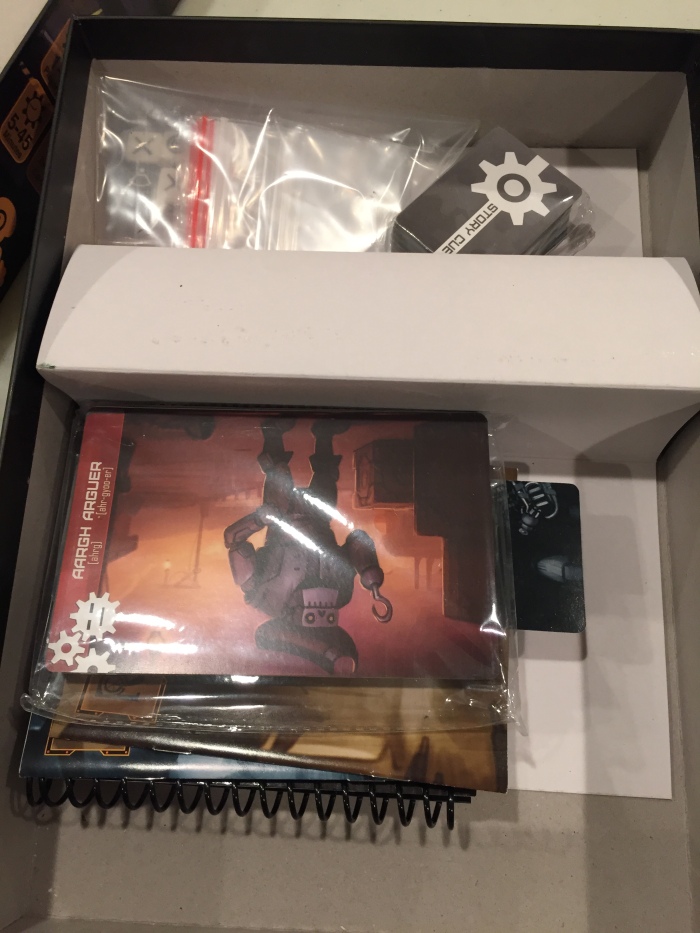 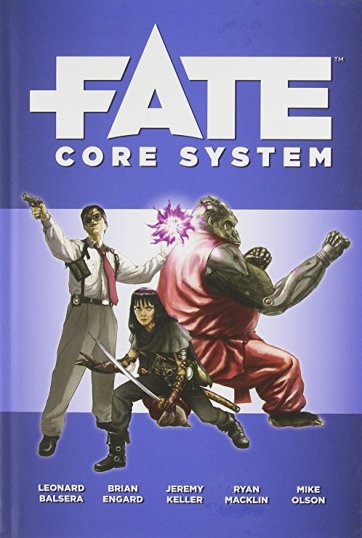 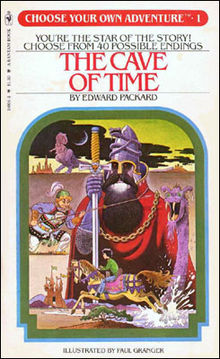 After playing it though a few times, the best description I have for this game is Fate (the RPG) meets Choose Your Own Adventure Books.  The players collectively tell a story, advancing the plot.  There are decision points in the game, where players simply decide which way to go. 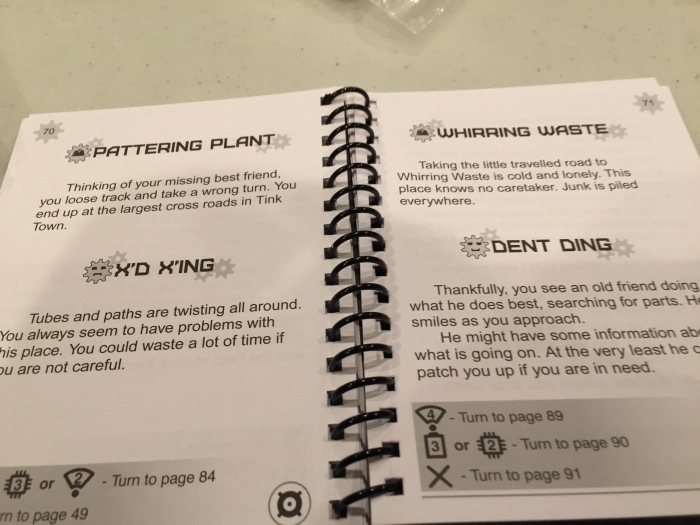 The core of the game are the Adventure books: the game comes with three.  The players choose which adventure to challenge, and start reading!  It’s very much like Choose Your Own Adventure books, as you read through the book, but with a difference.  First, you are cooperatively going through the story as Robot characters (and the reader/leader rotates) and secondly, there are challenges!

There are also challenges to overcome, based on your Robot’s abilities and some dice you roll.   Depending on the outcome, you go to a different place in the story.    Other players can also help, using story points.  These story points are a limited resource.

Your job is to solve the mystery/adventure presented.  The rulebook intimates that there is a large overarching story that you are discovering.  In the short term, you try and get as many victory points as you can. 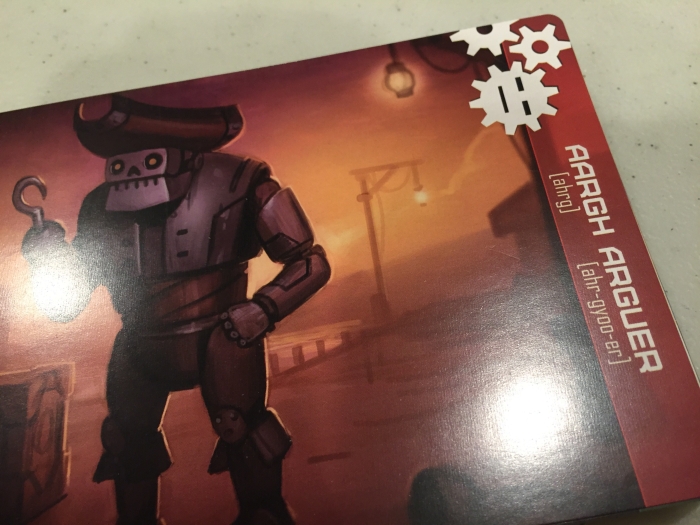 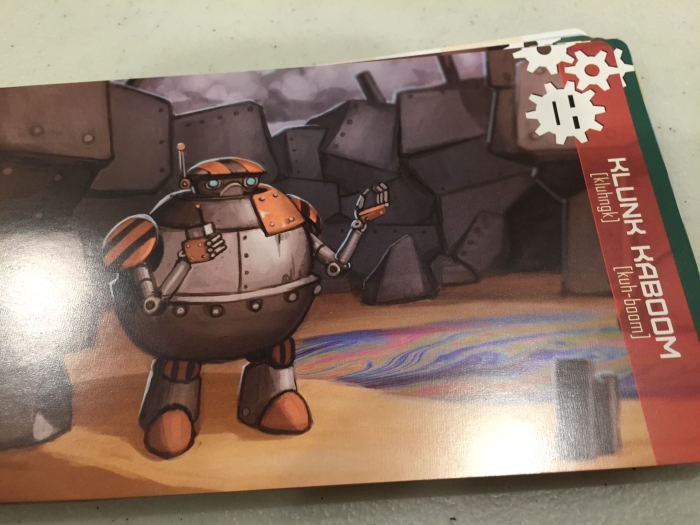 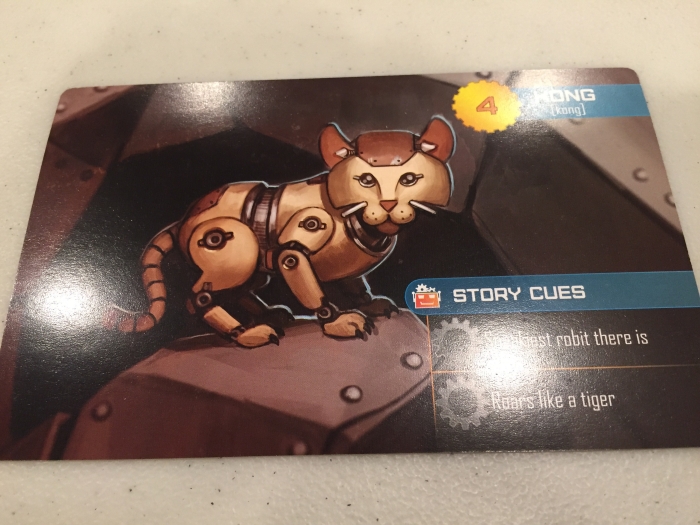 First and foremost, I really like the art!  The art does an outstanding job of bringing the theme out: I feel like I am a little robot in this world!   From the cover, to the cards, to the little black and white illustrations, wow.  This art really brings the game alive. 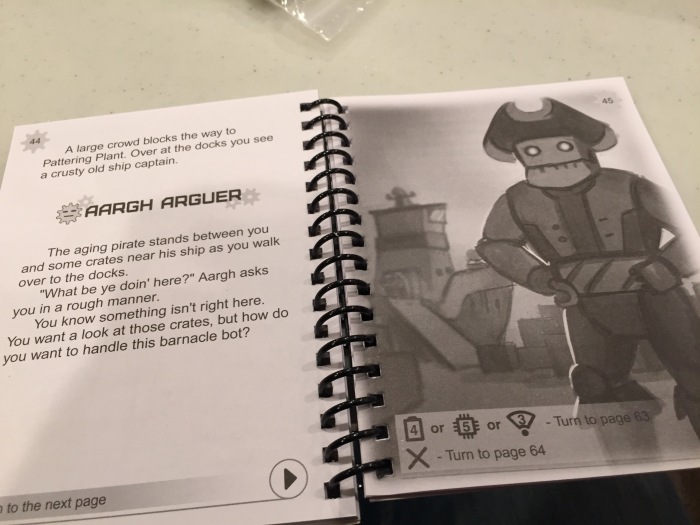 The components are a mixed bag.  Some are good, some are bad.

The little adventure books are readable and well bound.  They are very usable.

The dice are fine: custom dice are always cool. 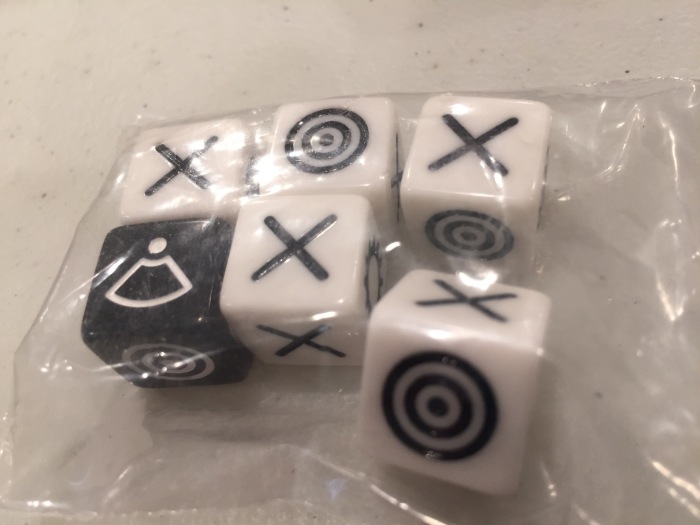 As much as I like the art, the card quality isn’t very good.  The cards are very thin and very dent/bend easily.   I just opened the the box, and I feel like the cards are already starting to get wear and tear!  They are fine, and they work, but I feel like this detracts from the amazing art on the cards.  I suspect cards sleeves would go a long way here. 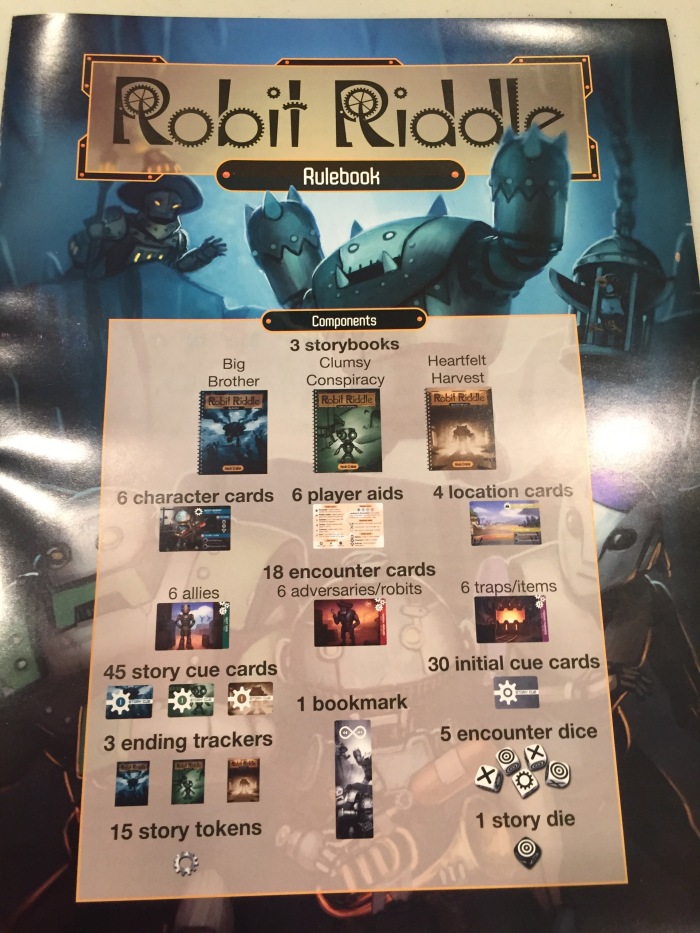 The rulebook is decent, but it could have used another pass by an editor (I found a few spelling errors and it was hard to follow at a few points). I struggled to get through the rules.  The rulebooks could have used a few more examples of game play and rules applications.  But, the rulebook did a good job of showing the components on the front cover (so you could separate them into semantic decks: see picture above!)

And the set-up was easy to follow: see above!

The rulebook starts off quite good, but I felt like it didn’t do a great job at explaining the game.  In the end, I got through it and it was just “okay” overall. 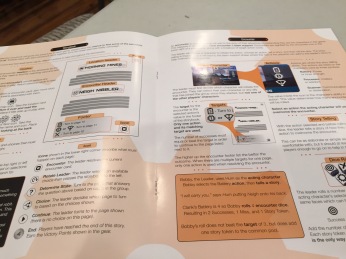 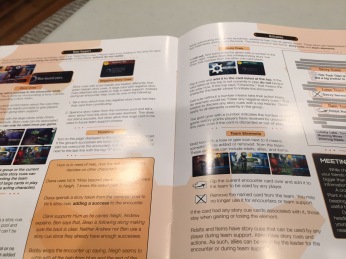 Having said that, the game summary cards saved the day!  Thank you for having these!  I don’t know why most games don’t have these!

So, the game has rules for solo play!  Hurray!  They adhered to Saunders’ Law! The basic idea is for the solo player to play several Robot characters.  I am happy they addressed this elephant in the room, but I feel like the best way to solo play this game is with a single Robot, especially on your first play.  I sort of cheated and gave myself another few Story Cue cards and that seemed to be enough to make progress.

I made it through a few games, and I have come to the conclusion that I don’t think this is a  good solo game.  I think the fun in this game, like Fate (RPG), is the interactions of the other players collectively telling a story.  Playing alone felt very … sad.  The game is set-up to have others help you out in a very interactive way.  Playing by yourself just wasn’t very fun.  I am glad Robit Riddle has a solo mode, but I think I will only ever get this out as a group game.  The more players, the better!

My first play left me feeling like the game needed another pass by an editor.  It looks like a Comma Thief came along and stole most of the commas out of the adventure books!  Take a look at the very first page:  there are at least two commas missing!   All games have mistakes (and I am sure I have some on my blog), but the very first page has two errors!  As I went through the book, I found more missing commas and some awkward phrases.

The entire game needs one more pass by an editor. 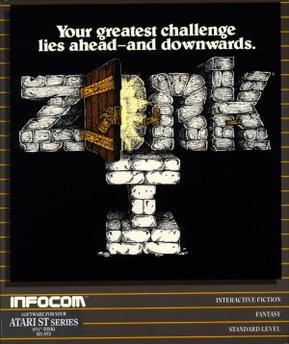 And this is one of the problem I have with Choose Your Own Adventure games: you make a bad (under some unknown definition of “bad”) choice and die!  (It was one of my complaints of the Arkham Horror: LCG) But, Robit Riddle at least acknowledges this potential problem and includes … a book mark!  (Okay, this is kinda silly save system  … but …)

I think that the bookmark  is supposed to be the “SAVE GAME” mechanism.  It’s sort of a silly way to save your game, but at least it acknowledges the “Oops! Bad Choice!” problem of Choose Your Own Adventures.  In fact, I almost wish there had been more bookmarks so that I could  have multiple “Save Games” (like the old Infocom games!) 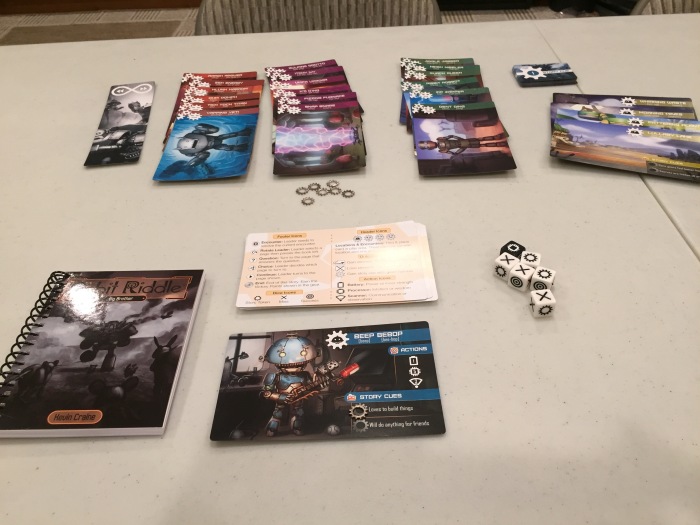 So what’s my first impression?  I think this is a good game, if aimed at a younger crowd—I could see this being a good family game.  There is a fun and interesting story here.  I don’t think this game really works as a solo game (it’s okay), but I am excited to try it with larger groups!  The art is really awesome, but the card quality isn’t great.  I really think another pass with an editor would have made a noticeable difference, but I think the game is still solid.  What I have seen of the story looks fun and the mechanics are interesting.  I realize my review sounds a bit negative, but my first impression is that this is a 6 or 7 out of 10 (on the BoardGameGeek scale).  If it goes over well with a big group, I suspect this will end up at a 7.  Stay Tuned.

(RichieCon 2018 is coming up soon, so I suspect I’ll get it played there!) 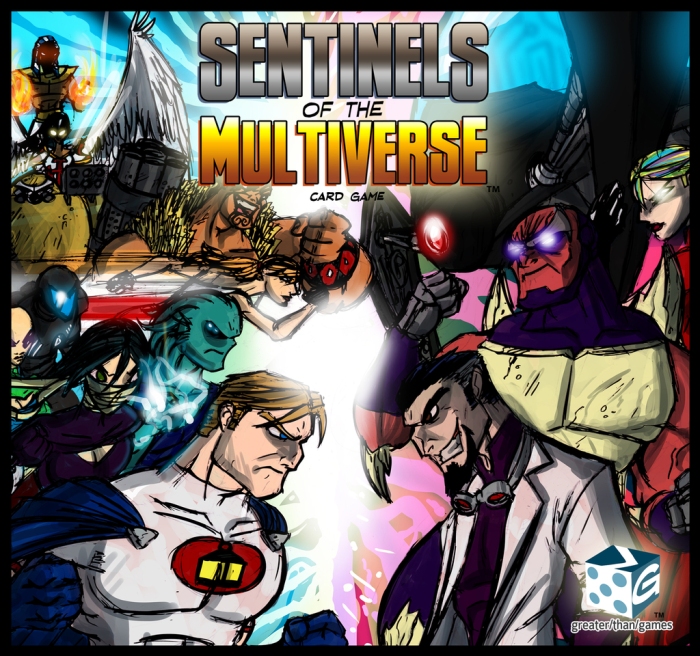 Recently, a friend of mine sent an email to several of us saying “Sentinels of the Multiverse is on sale for Android”.  Cool.  I was going to forward to some other friends, but then realized … they don’t like Sentinels.  And in fact, all of my friends who don’t like Sentinels seem to like Seven Wonders. 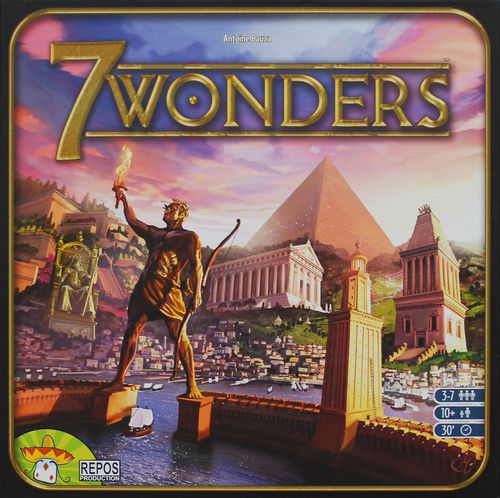 Is this true in general?  Or is it just a blip in our game group?

If we could just tap into BoardGameGeek, find everyone that rated both games and compare them, maybe we could see if this were a real trend!  But, alas, we can’t do that.  Or can we?

My friend Josh pointed out that BoardGameGeek allows an interface to download just such data:

With this interface, Josh downloaded what we needed (he used  a curl script to gobble the data and parsed the data with a Python script) and generated some stats and graphs.  It was easy: he did it in about an hour. 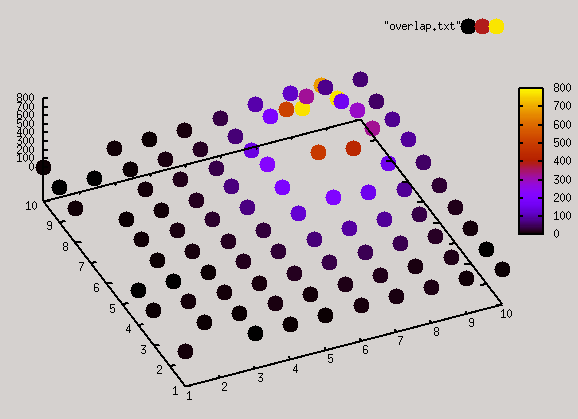 On the left axis are the ratings (from 1-10) for Sentinels, on the right axis are the ratings (from 1-10) for Seven Wonders.  The height of the 3D graph shows how many BGG users rated the game (on BGG’s scale of 1 to 10, where 10 is the best).   You can see that the data seems pretty consistently rising on both sides.  People who like Sentinels tend to like Seven Wonders and vice-versa.

Other interesting data from the time of the comparison:

I am curious, what do other people see?