I’ve been reading Comic Books since I was very young (7? 10?  years old?)  and SuperHero comics were always my favorite.  I wanted to be Batman (with cool gadgets) or Superman (with his flying and heat vision) or Spiderman (flinging webs) or Quasar (who? Read The Pegasus Project) or pretty much ANY SuperHero.   When I first discovered cooperative board games (like Arkham Horror, 2nd Edition) in the early 2000s, I was excited but disappointed!  Why weren’t there any cooperative SuperHero games?  There just weren’t any …

Fast-forward to 2019!  The Avengers: Endgame movie just came out and is one of the biggest movies of the year!  If not the decade!  SuperHeroes are definitely in vogue, and there are a bunch of SuperHero games now!  And a good number of them are cooperative games.  Let’s take a look at the Top 10 Cooperative SuperHero games!

Before we get into the list, let’s talk about a few that didn’t quite make it for one reason or another. 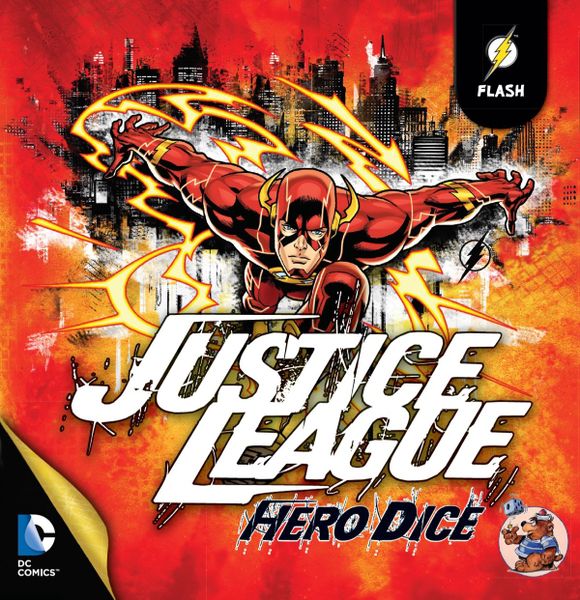 Okay! Let’s get to the Top 10!  As usual, we will  quickly discuss whether the game plays solo (Does it follow Saunders’ Law?) 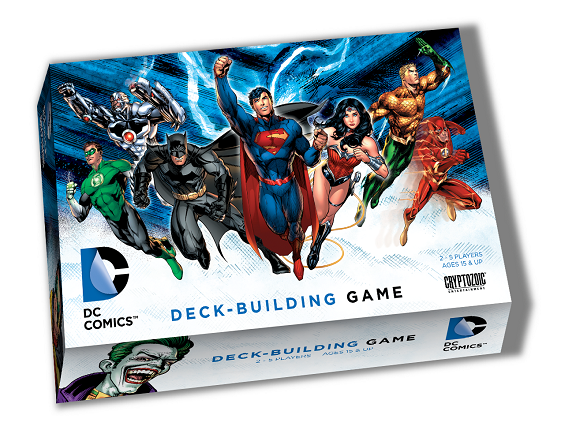 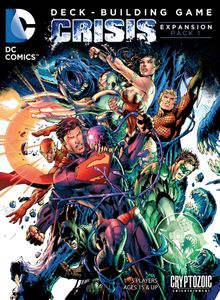 By default, the original DC Deckbuilding game is a competitive deck-building game.  As of now, there are 4 Crisis packs (see picture above) that turn the game into a cooperative game.  It’s still, at its core, a deck-building game.  It adds cooperative mechanics as each player takes the role of a SuperHero from the DC Universe (with fairly simple powers) and players try, as a group, to work their way through a set number of crises.  If the players make it through the last one before the deck runs out, they win! The mechanics are a little clumsy and the “crises” feel a little pasted on into the deck-building game, but in the end, it was pretty fun. 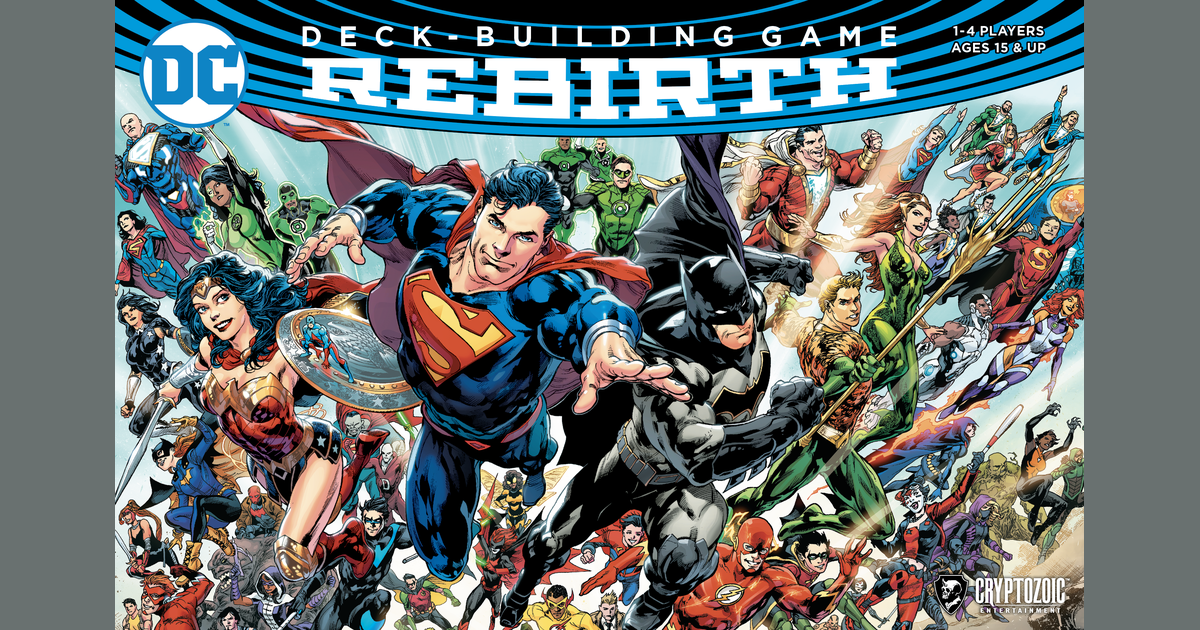 As of this writing, they are “rebooting” the game. The deck-building engine of the DC Deckbuilding game is called the Cerberus engine, and apparently has evolved through quite a number of products, including Attack on Titan.  The new Rebirth is supposed to add some legacy elements, add movement around the city, and is the “best” version of the Cerberus engine!  Time will tell if it’s significantly better!  You KNOW we’ll review it here on CO-OP Gestalt!

This is a real fun dice-chucker by Richard Lanius (designer of Arkham Horror 2nd Edition!) and Michael Guigliano.  Each player takes the role of a Hero from the Batman (the Animated Series) universe: Batman, Robin, Commissioner Gordon, etc.    You are trying to stop the Villains from blowing up the buildings!  Working together, you role dice, mitigate dice rolls, and move/position your Hero around the city to stop exploding buildings! 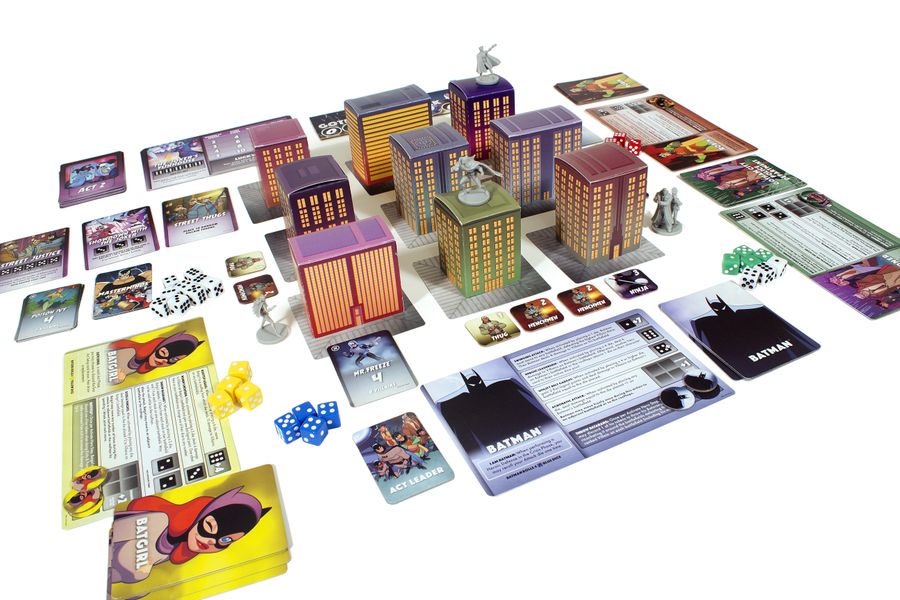 The game has a real high “toy factor” with the little minis and the buildings you can move to.  It’s a fun, it a little lucky (with so much dice-chucking)!

Plays Solo? No, unless you play multiple leaders (but then it’s clumsy). 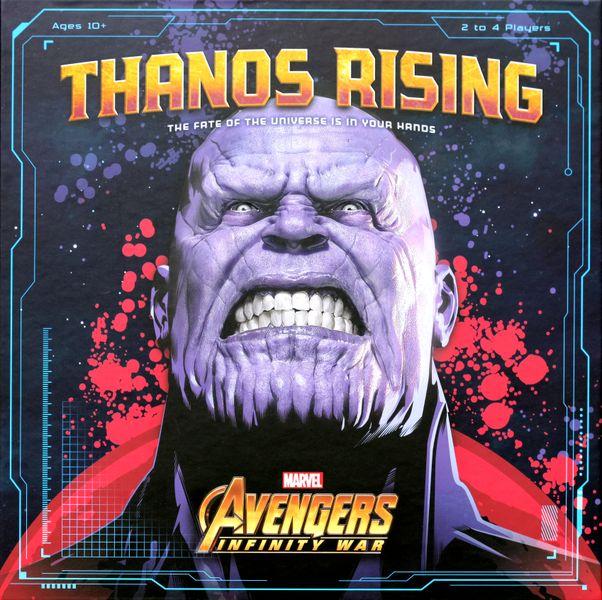 So, this is another dice-chucker (like the Batman game at number 8).  Each player takes he role of a hero who is a team leader (become Captain America for the Avengers team or Gamora for the Guardians of the Galaxy team or …).   The players role dice to try to recruit characters for your team, with the ultimate goal of collaborating and defeating Thanos (using the same dice you are using to recruit)! 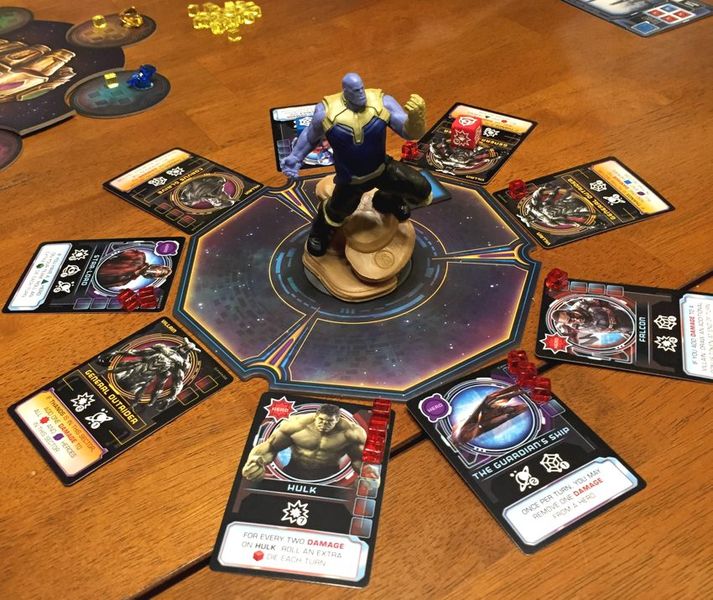 Like Batman, this one also had a nice “toy factor”, with a Thanos figure who rotates and “attacks” 1 of 3 sectors per turn.  As the game proceeds, Thanos progresses and finds more and more Infinity Stones (gaining more powers for each gem he acquires), until he finds them all and wins!  You have to stop him!

This game is a dice-chucker and arguably more lucky than the Batman game, but I still had fun!  Even when I was rolling bad, I was rooting for my friends who were rolling MUCH better than me!  Fun cooperative game.

Plays Solo?  No.  This game is really about the interaction with multiple players. You could probably technically play two different characters. 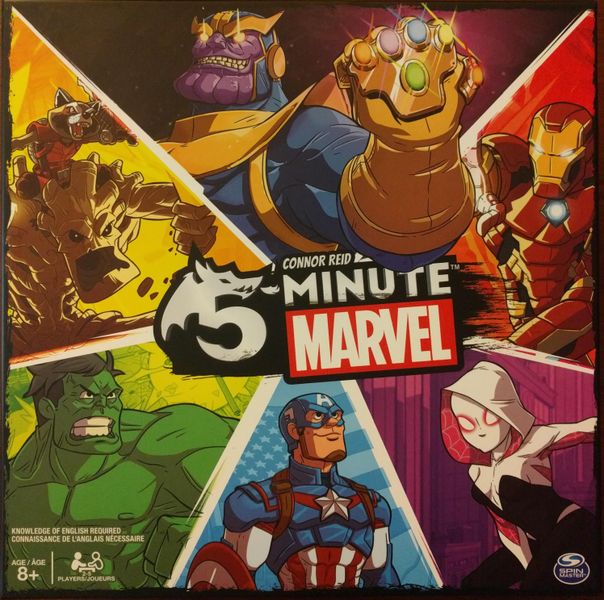 This game is by far the lightest game on this list, but it was so easy to play and so easy to get into!   Each player takes the role of some Hero (each with a different, simple power to manipulate cards). 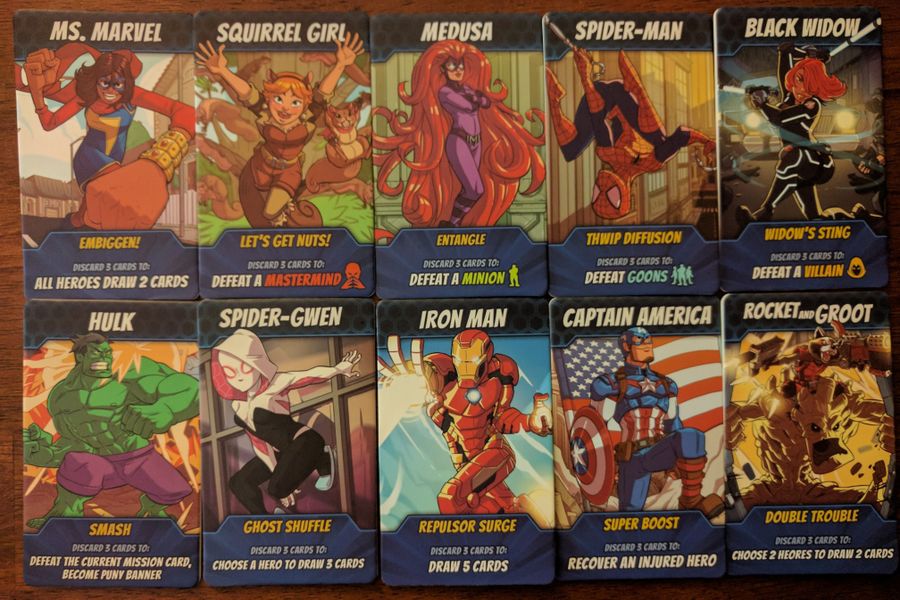 You all work together to draw cards and try to get all the cards you need to defeat the all the bad guys.  It’s all real-time!  You play cards, take out villains until you finally get to the big bad! But you only have 5 minutes!  If you run out of time, you lose! 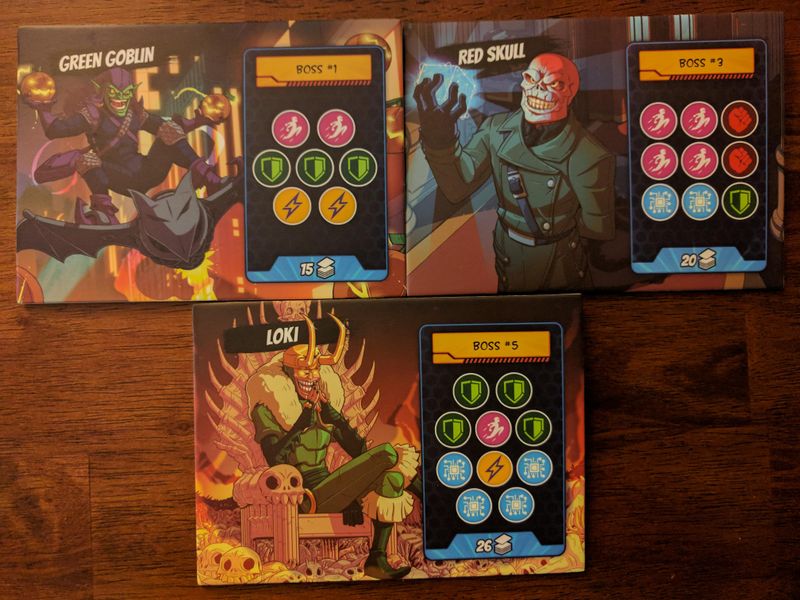 The game is slightly misnamed, as you have 5 minutes PER VILLAIN!  You start off with a simple villain, try to beat him in 5 minutes!  Then repeat, with harder and harder Villains until you get to Thanos!  If you take out Thanos, you win!

This is a very light game, but really fun!  And the cooperation REALLY comes through in this one, as you have to share cards in real-time.

Solo Play?  Inasmuch as Sentinels is: see this blog post for how to play solo.

Soooo … this is by far the heaviest game on this list.  This is the “final” expansion for Sentinels of the Multiverse (a cooperative SuperHero game), but it is a very different game in many ways!  It adds so many new mechanics, it is no longer the simple, straight-forward card game but a deep, deep game!

The players work together together to take down Oblivaeon (who looks NOTHING LIKE THANOS) as he and his forces shift between realities, and heroes die (!) forcing the players to on the role of new players (who will also die).    Players have to go in knowing that your hero will die, because it might be too much to handle in the heat of the game!

This is real fun, but do not attempt it unless you are ready for a 3-4 hour game which is not unlike Avengers: Endgame!

5. Kick-Ass: The Board Game 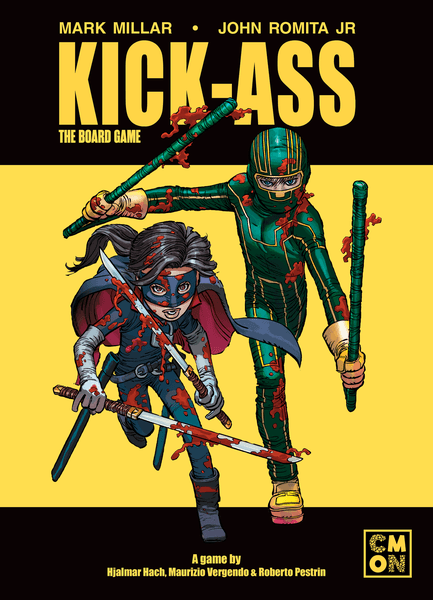 This one really surprised me.  I don’t like this comic series.  But the game is really great.   It’s probably the second heaviest game on this list. 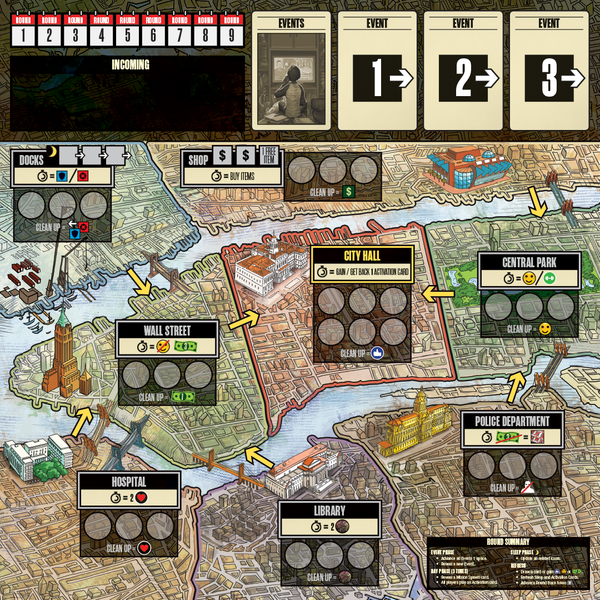 Each player takes on the role of a character from the Comic Book.  Their powers are set by some starting cards, which are VERY DIFFERENT for each character.  Players move around the city, keeping crime under control.  They are trying to find the “Big Bad” Villain to fight at the end of the game.  The players have to keep the events (upper part of the board) in check, otherwise the city just gets overridden with crime. 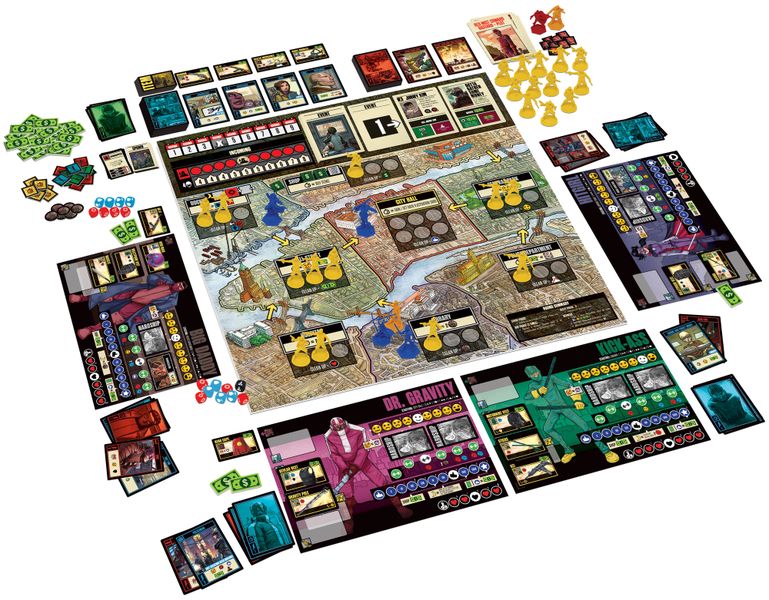 The game has a 18+ rating, as there is some language and imagery that is mature.  That’s consistent with the comic and movie.

But this game is really good!  You feel like you “level up” as you play the game, so you feel like your character is getting better and better as you play!  You become better at Social Media (seriously), hit the gym, buy better equipment, cheer yourself up.  There’s even a smidge of deck-building (your main action cards, but you can only ever have 5 cards)!  But you still work with your compatriots to fight crime, keep the city under control, keep the events under control, all while leveling-up so you can fight the Big Bad at the end of the game.

I really liked this game.

Solo play: Yes.  You can play 2 hands, but there are multiple rules for solo play on BGG.

Legendary is a Marvel-themed cooperative deck-builder.  In this game, you don’t play a particular hero, but you play more like a “manager” as you recruit Heroes to your deck, all while trying to stop villains from moving across the city and escaping! 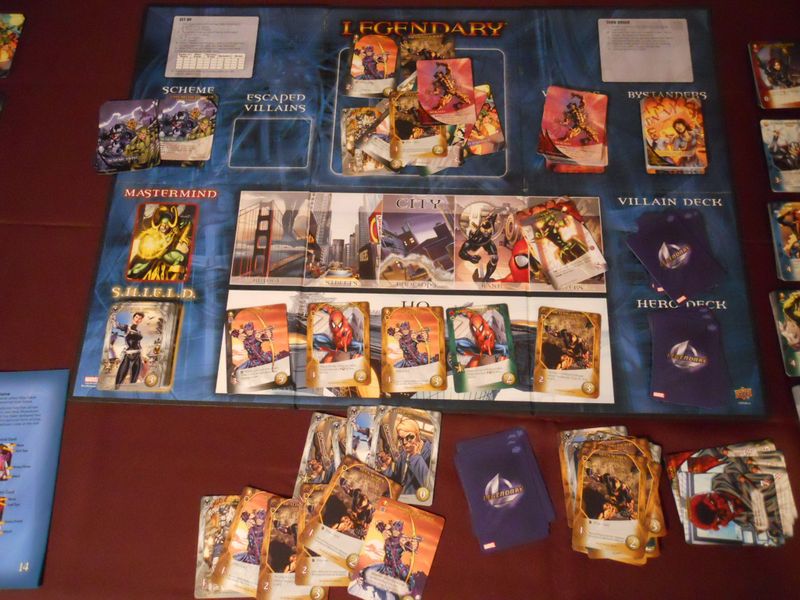 The game has TONS of expansions and tons of different scenarios in this simple deck-building system.   It feels good to build up your deck and get better and better heroes and take out the Villains as they escape from the Villain Deck. 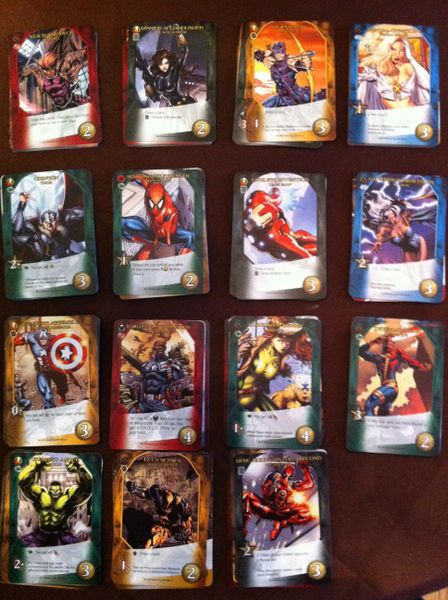 Strictly speaking, this is NOT a cooperative game, as you are supposed to add up the victory points (of all bad guys you defeated)  and the winner is the one with the most victory points.  We NEVER play like this: we always play purely cooperative, and everybody I know plays it cooperative.  I wish they would just make it official!

By all measures, this game shouldn’t be this high on the list!  At the end of the day, the core mechanic is “really” just a Yahtzee “reroll dice up to 3 times”!

The game has amazing components, and these components really bring out the theme of the game!  The city locations are these amazing dice trays!

The game has Player Selected Turn Order, (one of my favorite game mechanics), as you can activate your dice in whatever order you like after rolling.

The game feels complicated the very first time you play, but once you get into it, it flows quickly.  Players MUST work together to decide how to help each other.  Do we take out a villain at a location?  Do we do some damage to Steelheart (the big bad you have to defeat to win)?  Do we have to clean up the streets?  Do we go shopping for better gear?

The game is real fun and the component quality is just amazing. 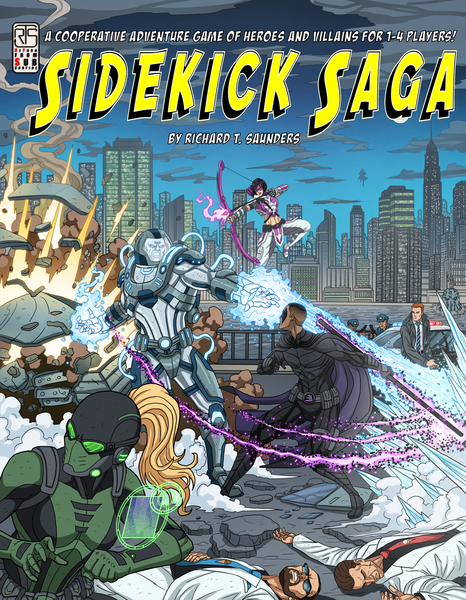 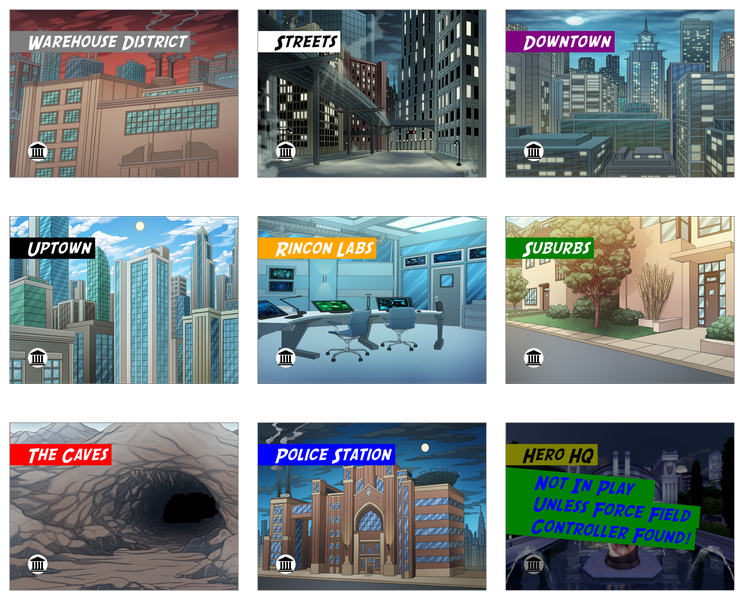 At the end of the day, Sidekick Saga has an ongoing story, city exploration, fast-moving play, great art, and probably my favorite feature: you can make your own Super Heroes!

1. Sentinels of the Multiverse

Plays Solo?  You can, but it’s not built-in to the game:  See this blog entry for how to play solo

This is not really a surprise to anyone who knows me.  I bought the game sight unseen off the Greater Than Game website in 2011 (I have the original version with the original art above!)  I knew nothing about the game.  After I played it, I never looked back … I loved it! 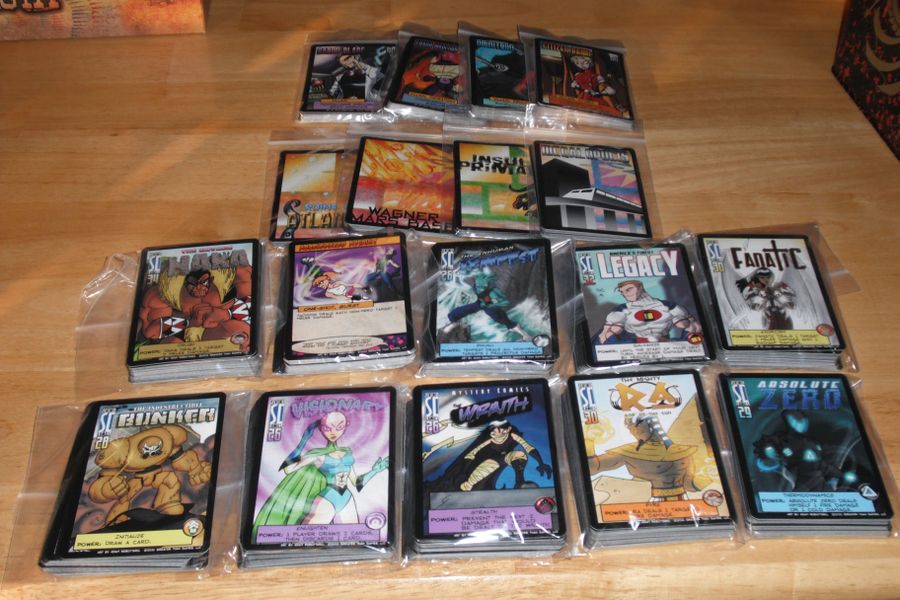 Each player takes the role of a Superhero with their own deck!  Each SuperHero is VERY different and plays VERY differently!  Of all the games on this list, this is the one where you really feel like you are playing that hero and nothing else is like you!

The gameplay is simple: play a card, use a power, draw a card.  That’s it!  (Well, you have to draw a card for the environment and the Bad Guy too ..)  What makes the game interesting is what the cards do! 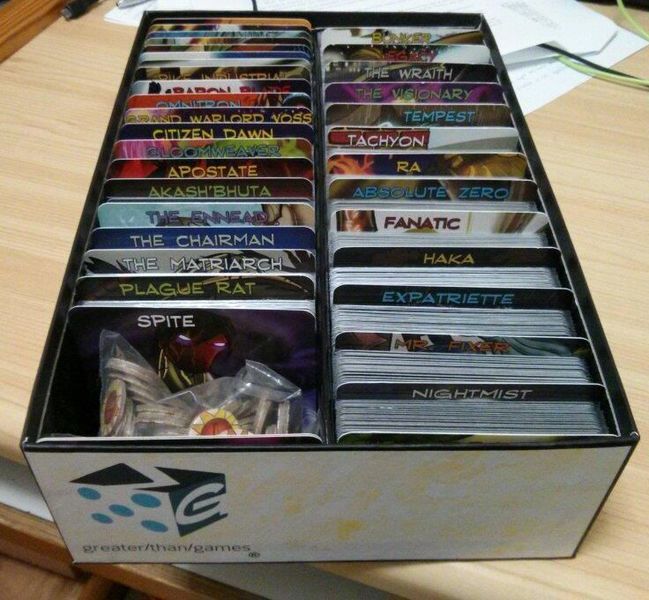 There are SO MANY expansions to the game and so much content, you could play this game for years!  It also has the best App of any game I have played (if only because you can rewind a turn or two!)

Some  people think this game is too fiddly (in which case, the app is definitely for you), but it seems to bring out the SuperHero genre better than any game I have played!  Even when you lose, it reminds me of old Spiderman comics (“I lost to the the magic guy!  Maybe I’ll go recruit Doctor Strange to help me!”) where you rethink how you go after a Villain NEXT TIME!

Sentinels make me feel like I am playing a SuperHero.

20 thoughts on “Top 10 Cooperative SuperHero Board and Card Games”