Well, I knew what I was going to be doing tonight … I got an email from Greater Than Games saying “it has delivered”.  Joy! 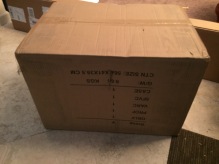 As many of you know, Sentinels of the Multiverse is my favorite game.  I talk about it here, here, and here.   This expansion for Sentinels of the Multiverse Kickstarted back in February 2016! And it was supposed to deliver (ahem) in January 2017.  I JUST GOT MY PACKAGE today, and it’s August 1st, 2018 (and I am one of the earlier receivers).  So …. it took a while to get here.  Ahem.

I think if this was just about any other game, I would be very very very annoyed.  But for some reason, I just can’t stay mad at the Greater Than Games guys.  They did a pretty job of getting at least one update a month.  They kept us in the loop about why it was late.  And watching the carrying case saga unfold was very interesting!    So, although it was tremendously late, they at least kept us informed.  Which is more than I can say for some Kickstarters!   So thank you to the Greater Than Games folks for all this great stuff!

So, normally when I do this, I unbox the game, play a few games and give an initial impression.  Then later, after playing it with other people, I wrap up the review.  So, usually my reviews come in twos.  Not this time!  There is SO MUCH CONTENT, between the new game, the Kickstarter exclusives, the new Hero decks and variant covers and Foil cards … we are just doing an unboxing this time.  They may be upto 5 parts to this review … Look how much came!

Let’s start with the basic game expansion that started this whole thing!  The Oblivaeon box!

So, let’s get this out the way … yes, Oblivaeon looks like Thanos, and yes, he’s a star-spanning Villain bent on destroying the Universe like Thanos.  But he’s not Thanos.  *Cough*. 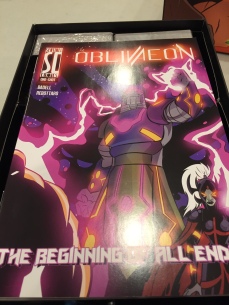 The game comes with a nice rulebook (similar to previous Sentinels rulebooks).  There are a number of new  rules: it’s not just a straight-up expansion like others.  It also comes with a Comic Book describing “The Beginning of All End”. 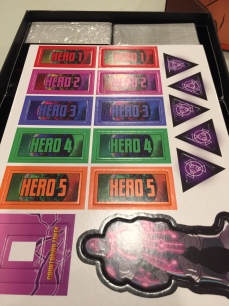 Oblivaeon, in his first form, has 10,000 Hit Points.  Ahem.  Hm.  This game seems to be harder than the previous.  You get a bunch of cards as well. 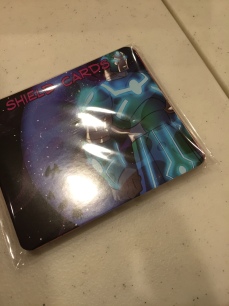 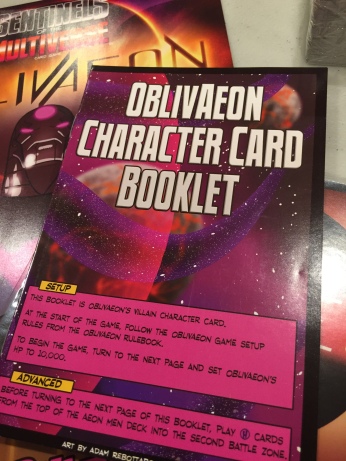 Pulling these apart, you get 5 New Heroes! Hopefully they can take Thanos (I mean Oblivaeon) out!

You also get 5 new Environments.

The Villains are a little different this game.  We saw Oblivaeon, but he has supporting Aeon Men and Scions who do his bidding. 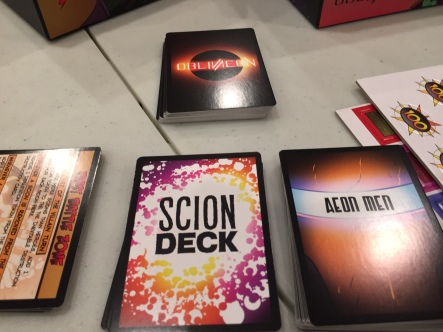 This base game has a lot of content.  I look forward to fighting a Villain with 10,000 Hit Points!!! Gulp! 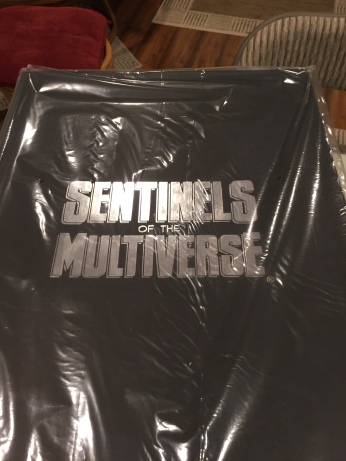 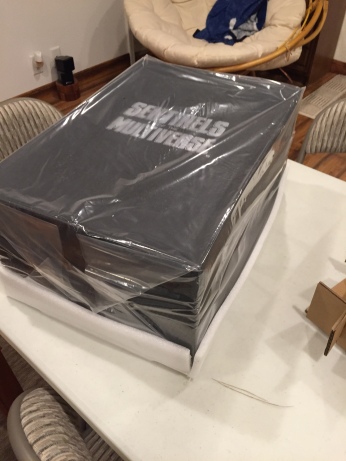 It’s hard to get a sense of scale, unless you compare it to other big boxes LIKE GLOOMHAVEN and THUNDERSTONE QUEST! 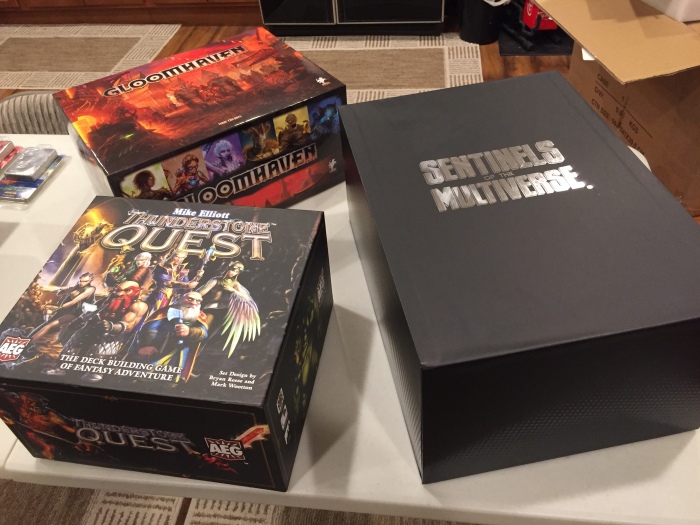 And, yes, it is bigger than Gloomhaven!

It’s supposed to hold every single Sentinels card every made.  It opens on the front with a magnetic latch and has a drawer for all the different types of cards. 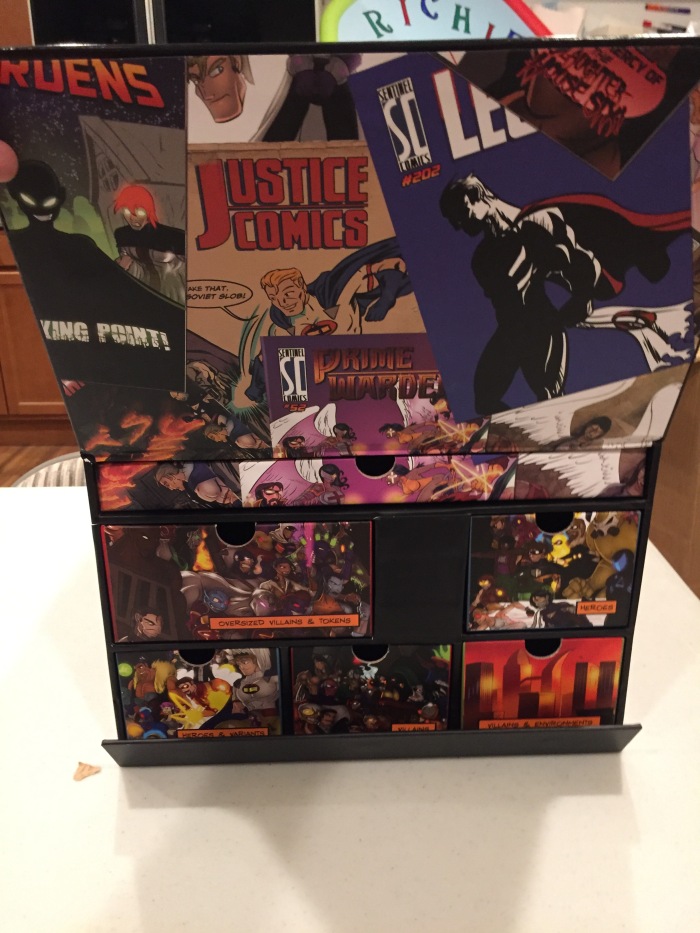 Here are some of the drawers opened up …

I plan to put all my stuff in here, but it’s going to take a while …

If you have the Sentinels of the Multiverse App for iOS or Android, there’s a decent chance you’ve already seen and played these fellows.  I downloaded Mini Pack 3 last week and got a chance to try them out.   Decent heroes!

Sentinels and The Void Guard

There’s a real interesting Hero that came with Vengeance (I think) called the Sentinels.  They are one of my favorite “characters” to play.  They are a little different because they wrapped 4 “baby-heroes” into a team and called it one deck.  It’s clever because they are supposed to be teen-agers, and they don’t have very many Hit Points.

They have cards to resurrect a hero when he dies.  This is real fun to play.

But now they’ve grown up!

Each member is now their own deck! So this comes with 4 new heroes!

I am looking forward to playing this expansion quite a bit, maybe even more than Oblivaeon …

When I first saw these, I thought, “Meh”.  But, after opening them up and seeing the Foil, I think these will really augment the game when playing.  They are pretty cool looking. 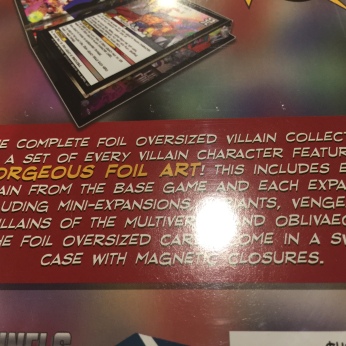 These are simply “variants” on the Heroes in the game.  The base Legacy boosts everyones damage by 1, but this Variant (above) has Atomic Glare.  Here are a few more from the deck.

There was one more deck that came.  I think these are Kickstarter exclusives!  It’s been so long, I don’t remember everything that was supposed to come!  But there are a few more variants in this pack … 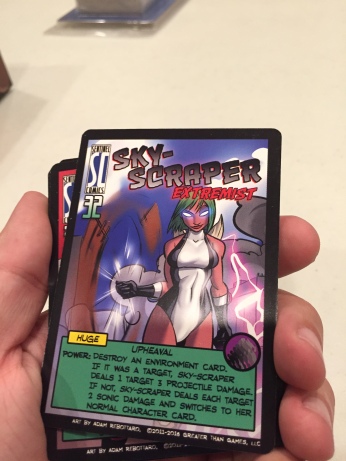 So, Oblivaeon has arrived!  I spent a few hours going through things, taking off plastic, looking at cards, and I have to say … I am happy!  They’ve done a great job (as usual). I think this will be an AWESOME expansion.  Set of expansions?

I will get it played and give my first impressions … soon!

I also have to fit all of this … 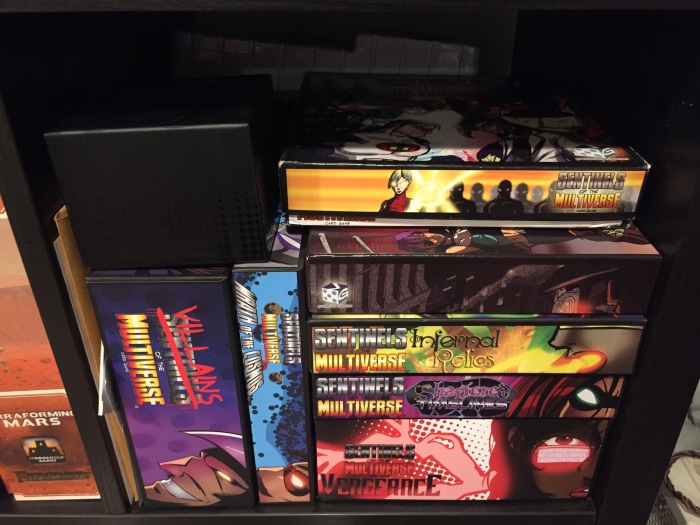 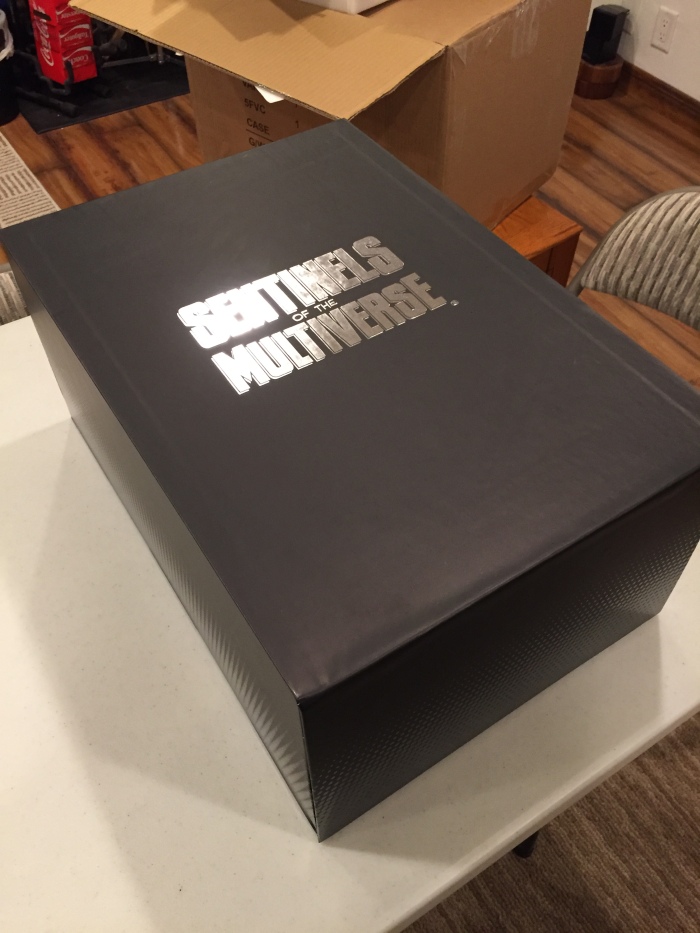