If you recall, I did a preliminary review of the cooperative steampunk game Zephy:Winds of Change about a month ago.   Since then, I’ve had a chance to play Zephyr a lot more, both with friends and by myself.  What do I think?

Building The Deck Of Your Ship!

So,  this is kind of a deckbuilding game!  You are building your ship by buying new systems with scrap (the currency of the game) and slowing adding these systems to your ship throughout the game.  But what that means is that you are adding new cards to your deck of actions.  On your turn, you draw cards and can perform some of those actions.  The more cards you have, the more options you have.  (A lame joke here is that you add cards to build the deck of your ship, so it’s a deckbuilding game!) 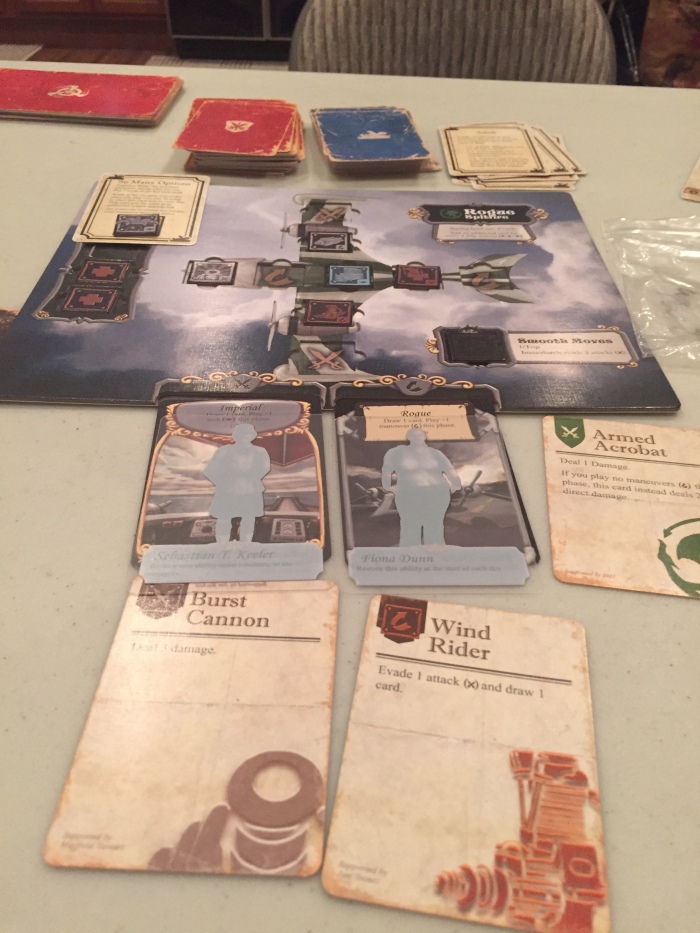 This game has a neat mechanic (no pun intended, as a lot of the characters in the game are mechanics) where the number of cards you can actually play is based on the number of crew you have (+1 for the implicit captain).  So, in the picture above, I can play three action cards: One for the imperial, one for the rogue, and one for the captain (implicit position).

This is further complicated by some constraints.  The first: you can only draw “a certain number of cards per turn”.  This depends on the ship you have (and usually, the number of upgraded systems you have).  Early in the game, you can only draw 2 or 3 cards.  Later, hopefully, you can draw a lot more.

The reason you want a lot of cards per turn is that each crew can only do certain things.  In the example above, the rogue can only do “evade” type actions, and the imperial can only do “attack” type actions. The captain, who know his ship, can do any type of action.

So,  that’s a twist on deckbuilding: only certain cards can be played by certain player types.  That’s new and interesting!

But, there is NO CULLING mechanism to get rid of weaker cards.  All you can really do is augment (add to) your action deck by buying new systems!  It appears that the only way to get rid of an action is to lose a battle, and (maybe) lose an action  card.  But it’s random!  So you have NO control over this.   After playing a few times, it’s not the end of the world that there is no culling mechanism.  But it feels like it should be there.

At the end of the day, it is a little too random to be a great game.  I roll for scrap, I roll for systems from a commander, I roll for rewards rolls, I roll for attack, I roll for critical hits.   So, I could be limping along because of bad rolls and my friend soars completely upgraded.   It’s mitigated by the fact that this is a cooperative game, but it’s still hard to sit back and watch your friends smear the enemies while you can barely do anything. I don’t feel like I can do a lot of planning because I just get what the dice give me.

I was also hoping for a little more exploration: the first few times just felt like attack-slogs, where every single turn was combat combat combat.   We started doing a lot more salvage runs, and that gave the game a lot more variety (the salvage runs draw cards from a deck).   It reminded me of the encounters in Arkham Horror a little: some great flavor text and some interesting and thematic situation.  Really!  The salvage deck kind of salvaged (yuk yuk yuk) the game for me by making it feel just a little bit more of an exploration game.

Don’t get me wrong, this is a fun game!  But it really is a lot about attacking and defending airships, while building an action deck.

If you just want a fun “fly around a shoot bad guys together” game with amazing components, this really is a very good game.   The randomness may turn you off,  but if you accept that, this game can be a lot of fun.  (To be fair, this is MUCH LESS random than “Tales of Arabian Nights”)