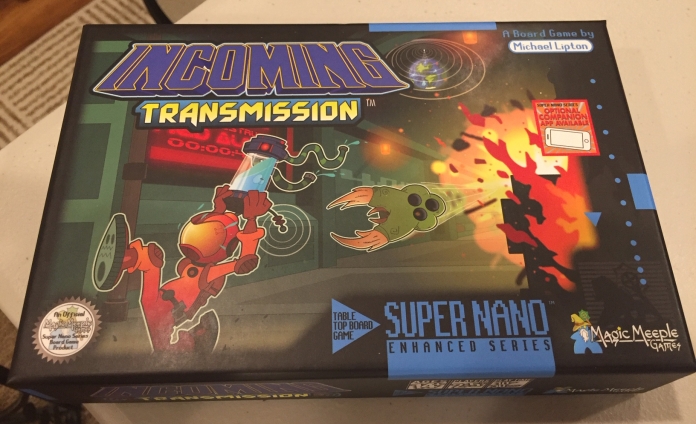 Incoming Transmission was a smallish cooperative board game on Kickstarter back in Februrary 2019. It promised delivery in February 2019 but it only delivered last week (March 2021). It’s about 2 years late! These days, a year late isn’t that bad, but two years late is pushing it a little.

The box is a fairly small box (about the size of Solar Storm, another smallish game we looked at).

The game comes with plenty of plastic bags (too many? I suspect I will steal some of these for other games) and some really nice little wooden meeples. The orange meeple is the “cadet” one team will move around the space station. The green meeple is for an expansion that comes with the game.

The rest of the game contains two types of components: tiles or cards (see above).

The tiles are thick cardboard and very readable.  You can see that the game has really embraced the 8-bit computer art aesthetic!

The cards aren’t linen finished, but they are easy to read and decent (see above).. Again, the game really embraces the 8-bit theme. 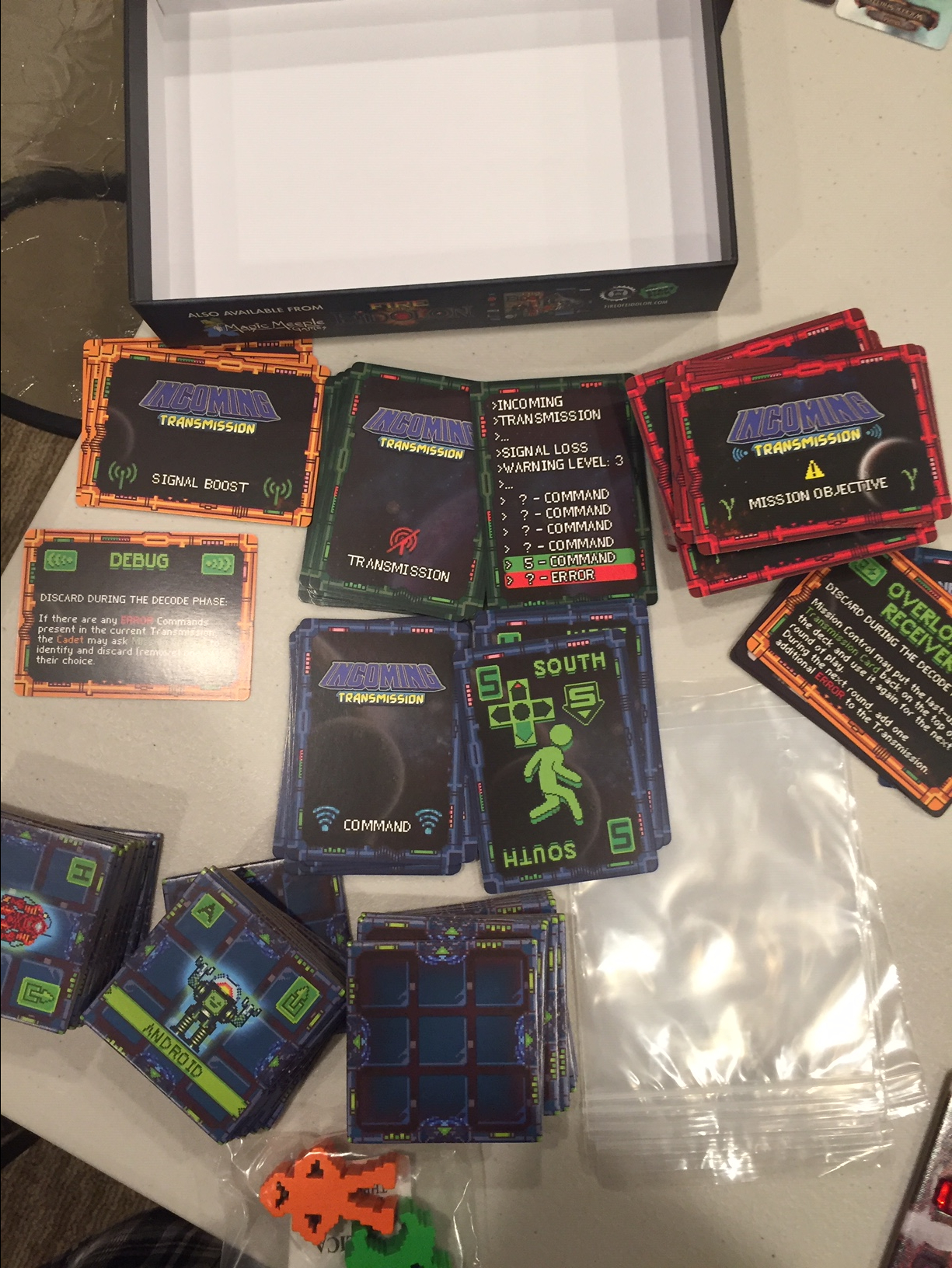 Overall, the game is very consistent in the 8-bit theme. Assuming you like that look (I do), the game looks pretty.

The rulebook is pretty good. It was readable and I was able to learn the game pretty well. It is a fairly simple game. 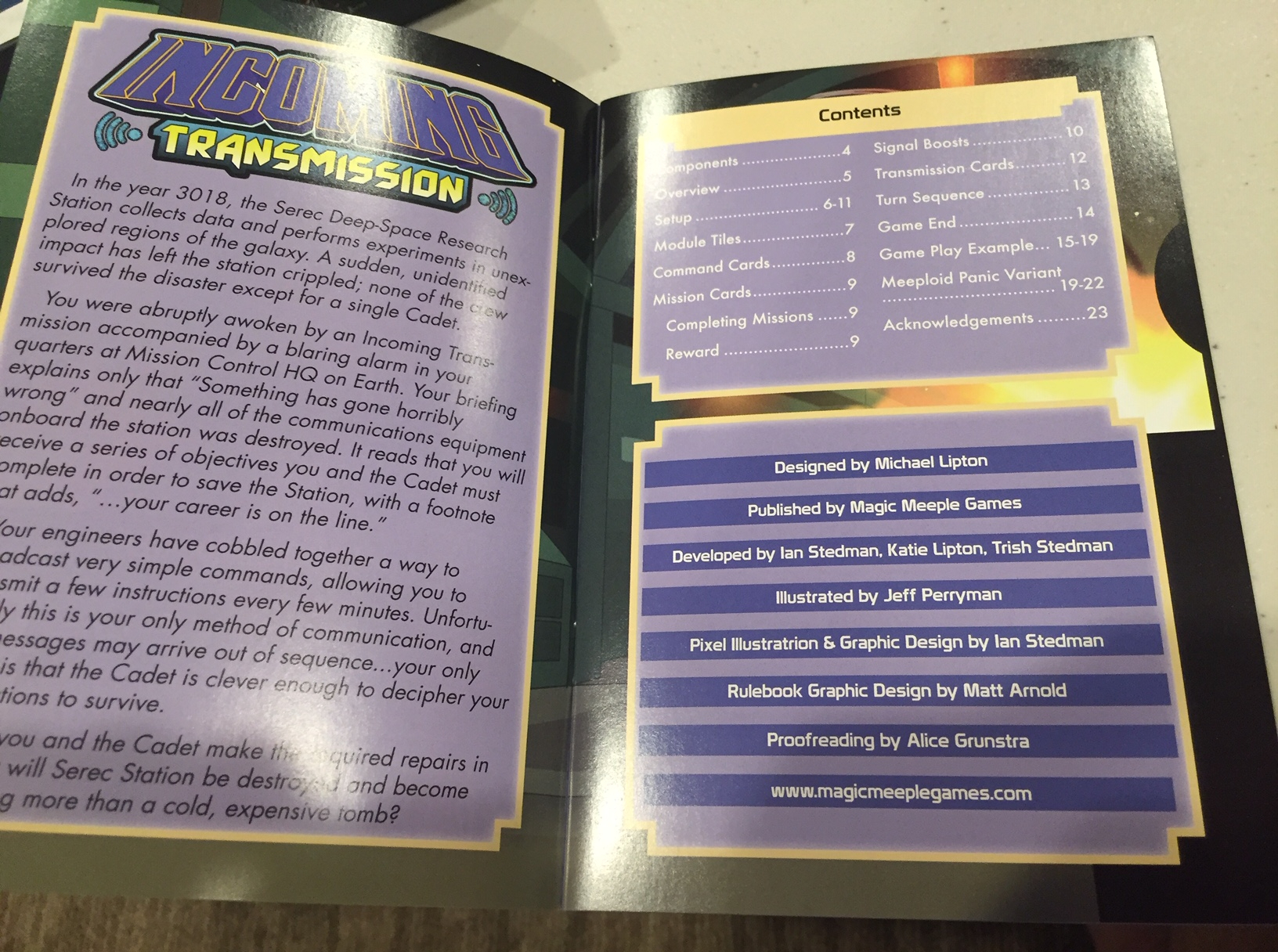 The font is legible and the pages are very readable.

We see the  components list on one page (pretty good: it shows all the components with pictures so that always help) plus some gameplay overview.

The next page (not shown) has the set-up and into the rules.

It’s a simple game and the rulebook was good enough.  I am actually fairly happy that I didn’t have any big issues with the rulebook: in the last few months, a few rulebooks have been less than stellar.

The game sets-up quickly to a 5×5 grid with the cadet starting in the middle. (Strictly speaking, the green “hat” is for the expansion that comes with the game, but we thought it was so cool we put it on the cadet for our game).

Green on one side means the items work: red (the other side of the tiles) means they are broken.

There is no solo play! (Boo for not following Saunders’ Law). This game is a hidden information game with two types of players: the clue-giver and the rest of the players trying to interpret the clues! The premise is that the Space Station is malfunctioning and the lone cadet on the station (being controlled by most of the characters) has to fix things on the station. The communications are ALSO malfunctioning, so Mission Control (the clue-giver) can only send bits of information on what needs to be fixed and sometimes that information is garbled! It’s up the cadet (and the players playing the cadet) to figure out what the Mission Control (the clue-giver) needs!

It’s hard to offer a solo mode in the “clue-giver/clue-receiver” situation. For games like Shipwreck Arcana, where all information needed in available on the board (and there’s no “connotations”), a technique like Changing Perspectives can work. That idea won’t work here because there’s too much implicit information. So, you pretty much always have to have at least 2 players to play: one clue-giver and (one or more) clue-receivers. So, Incoming Transmission has no solo mode.

The Transmission Deck (green) controls the length of the game: you can 7 turns (7 transmissions) to get the 3 missions (in red) done.

The object of the game is for the cadet to complete 3 missions before the transmission deck (7 cards) runs out. (The 3 mission objectives are hidden from the cadet players). Each mission needs the cadet to fix “something” on the ship. Fixing something means two things: (1) Turn item(s) to the green side (so they are operational) and (2) moving the fixed items/locations next to each other. In the example above, you need to move the Android item next to the Comlink module to complete the mission.

The missions have a lot of “flavor text” but the idea is to get card A next to card C in the 5×5 grid.

The clue-giver character gives 5 cards to the cadet characters every transmission. These 5 cards tell the cadet how to move arround the station and what things to pick up and fix. The only problem IS THAT THEY AREN’T IN ORDER! The clue-giver has to give directions (move n, fix, pick-up, drop) in such a way that he gives enough information to fix what’s broken but still “imply” what needs to be done! This is a logic puzzle where the clue-giver tries to “imply” things or make it clear what needs to be done! The 5 cards (in some random order) are the ONLY informations bits given to the players!!

This is a puzzle game. It’s pretty straight-forward. The clue-giver has to figure out the best way to give info to the players, and the players have to decipher what the clue-giver meant. It’s fun. It’s not super-deep, but it’s also not a light filler game. There’s just enough depth to make this a challenging little puzzle without frying anyone’s brain too much.

Our first play was 3 people and we think that either 2 or 3 people is the right number of people: the game says you can play up to 6, but it probably be boring for a lot of players who aren’t right next to the cards (the 5 clue cards). If you have some younger kids, they could probably “help”, but at the end of the day, 1 clue-giver and 1 or 2 clue-receivers seems to be the right amount. It’s nice to have a second clue-receiver “verify” and “bounce ideas”, but too many more would muddy the waters too much. 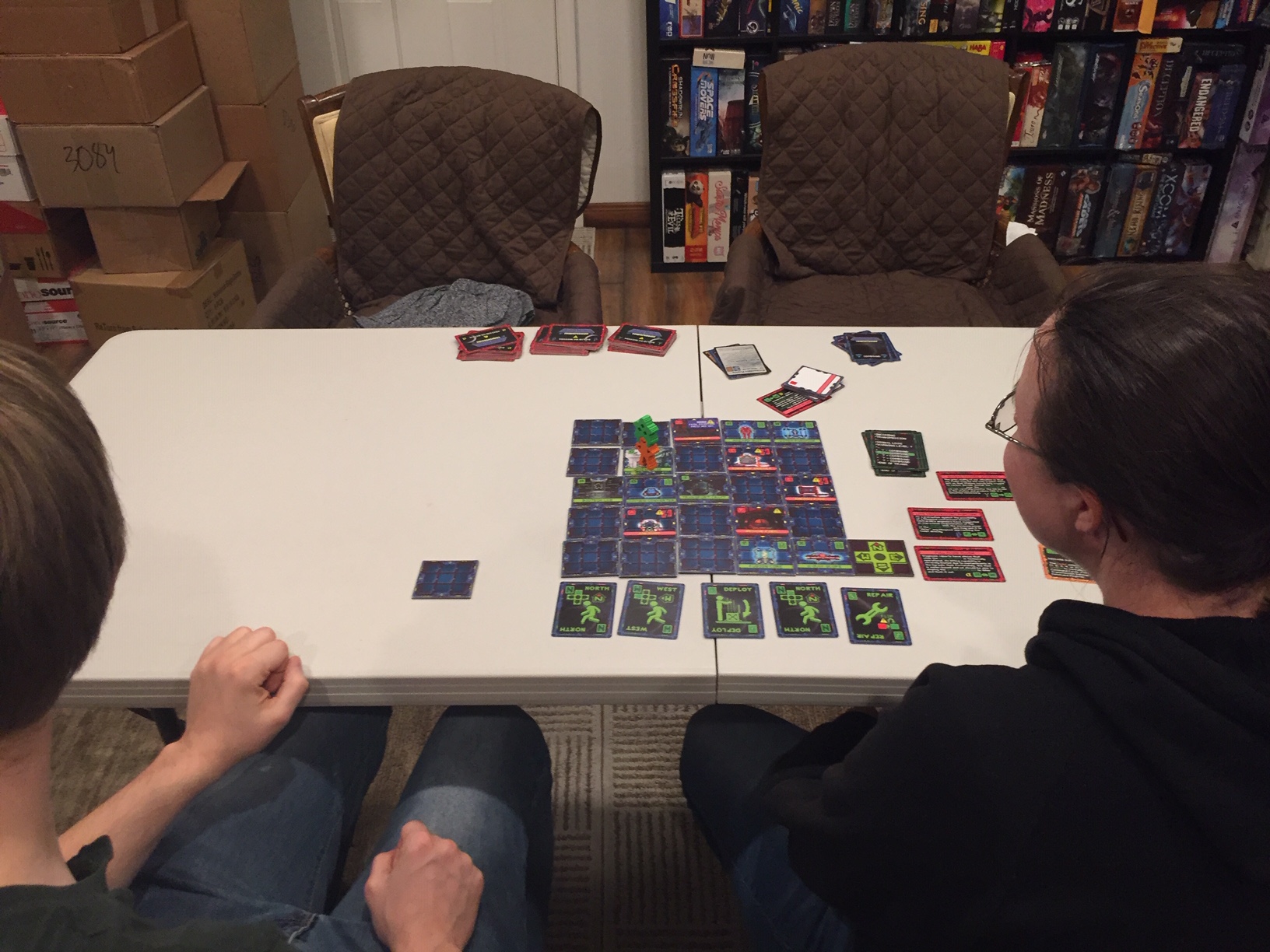 We waited 2 years for Incoming Transmission … was it worth the wait? Yes. This is a fun little game that probably would have made our Top 10 “Small” Cooperative Board and Card Games had we gotten it earlier. It’s not a super deep game, and it probably won’t come out all the time, but it’s a light cooperative puzzle for 2-3 people (too many more is probably not recommended) that’s a fun 10-30 minutes of gameplay.