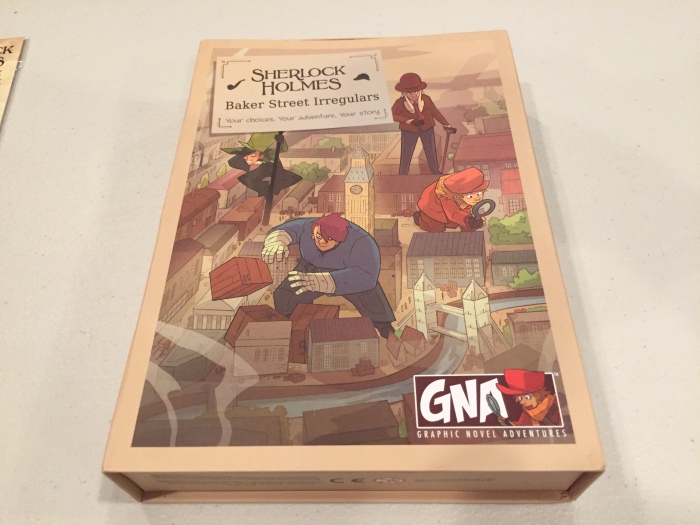 This Kickstarter just arrived Tuesday, just two days after Gloomhaven: Jaws of the Lion came out  (see our review here)!  What a great week it’s been! Sherlock Holmes: Baker Street Irregulars is a cooperative graphic novel adventure (from Van Ryder games) for 1-4 players. It’s very much like Crusoe Crew (which we reviewed here and here).   I picked this up because me and my friends liked Crusoe Crew for the most part, and I love the Sherlock Holmes theme.  So, this was an instabuy! 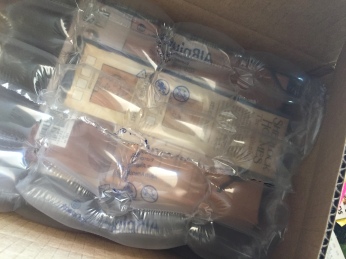 One of the Kickstarter extras was some bookmarks.  Which is cool, but you can’t put the bookmarks in the box?

So, I have to store the bookmarks externally. Weird decision.

Like Crusoe Crow, Sherlock Holmes: Baker Street Irregulars have a cool magnetic clasp for holding the box together.

The game comes with 4 Graphic Novels (1  for each character) and a Mission Log.

Each player who is going to play will take one of the books, and we all start reading the book cooperatively!  Again, this is VERY much like Crusoe Crew! 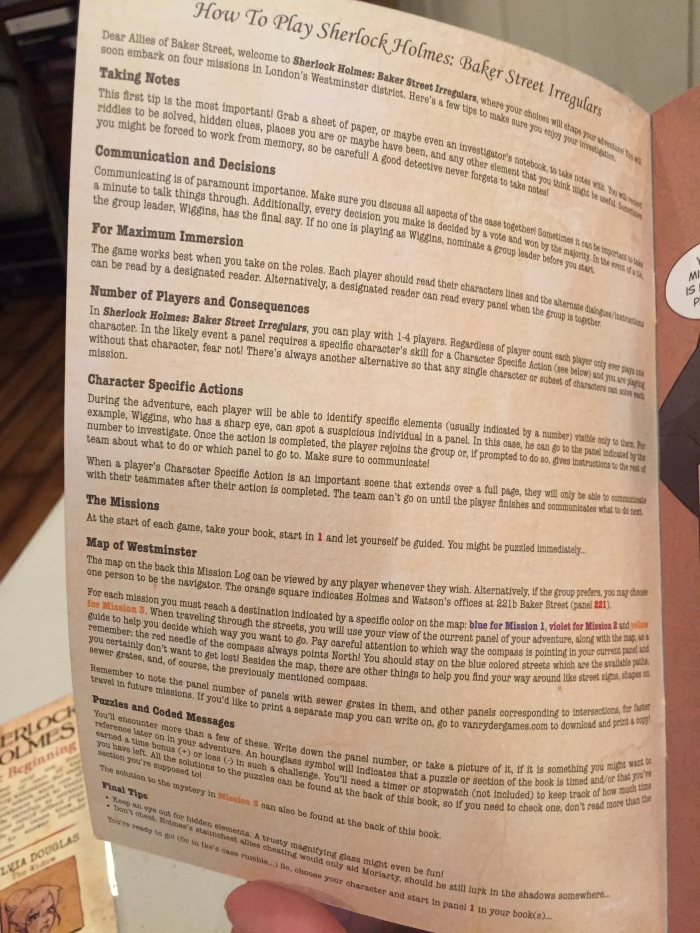 The rulebook .. is more like a pamphlet. They fit the ENTIRE directions on the one page above (in the Mission Log) with a teeny-tiny font.  You may have to get your glasses out!  But it explains the game pretty well.  There’s not too much to jump in.

And like any good Sherlock Holmes adventure, there is a map: it’ s on the back cover of the Mission Log. 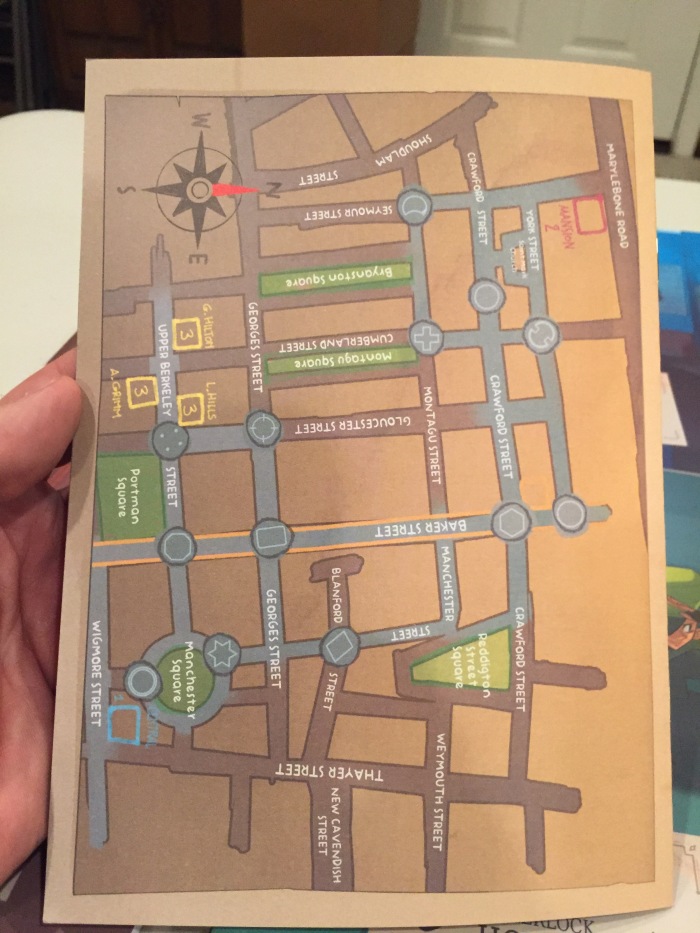 So, there were two major complaints we had with Crusoe Crew in our original review:

So, what about Sherlock Holmes: Baker Street Irregulars?  Did they fix this?

The Binding: Yes.  It appears better.  I have only played it a few times, but the glue/binding “feels” better than Crusoe Crew.  We’ll revisit this when we do Part II, but our first blush is “yes: the binding is better”.

The Margins?  Are a little better, but I still think they could have simply shifted it a bit more.

Short Answer: It appears Sherlock Holmes: Baker Street Irregulars has better quality control. The binding and margins are better than Crusoe Crew, but time will tell.

Saunders’ Law? The solo rules work pretty well.  Just take a book (the rules recommend Wiggins above) and go through the adventure by yourself.  Here’s the thing: I’ve played a lot of adventure/story games by myself, and a lot of them are decent with 1 player (Robit Riddle and Crusoe Crew), but not great.  I came home and was just SO EXCITED to play, I played through the first mission of Sherlock Holmes: Baker Street Irregulars myself.  I was engaged, I solved puzzles, I kept a map, I took notes.   I had a BLAST.   So far, I think this is better solo than Crusoe Crew!

The Fonts and Typeface Size

So, one complaint is that the font and some of the text was too small.  I already said that the rulebook page was too small.  Also, there were a couple of puzzles where I couldn’t read the text!  See the picture above!  I had to take a picture of the panel with my camera and ZOOM in it to see clearly see it!!! I guess this is thematic (like taking a magnifying glass to the book), but just something to be aware of.  You WILL need something to magnify the text!!!

So, at the end of the day, I am very excited to play through the rest of this! I am loving it so far!!  Now, there appear to only be 4 Missions in this book, so the game will definitely be done once we’ve played through all 4.  (Much like Sherlock Holmes: Consulting Detective).

You may have noticed that a lot of our reviews here at CO-OP Gestalt have been Part I: Unboxing, Solo Rules, and First Impressions because it’s hard to get a lot of games to the table WITH MY FRIENDS!!! (Darn COVID virus).  THIS ONE WILL BE DIFFERENT!  You should see Part II much sooner!!  Why?   Because I can pass out the books to my friends and we can play ONLINE!!!  We all have to be reading a different book anyways, so it’s just as easy to read the books cooperatively online (over Discord) as being together.  Our plan right now is to play next week.  The only thing that will be slightly awkward is that there is only one map (on the back of the Mission Log).  I can take a picture and text everyone .. actually … I think I will refer them to my blog (see picture below) … stay tuned for more thoughts ..