There’s a fairly new breed of board and card games, where an app on a phone or tablet (or sometimes computer) provides content for a physical board game! To be clear, the board or card game is unplayable without the app! Note that this is not the same as playing the game online … the physical boards/cards still sit in front of all the characters around a table!! (See a very different lists here for that: Top 10 Cooperative Games You Can Play Online). This hybrid experience uses an app to augment a physical play of an in-person physical board game. Although some people don’t like apps spoiling the “purity” of their board games, apps augmenting games are here to stay. Over the past few years, there have been enough games released that we can can make a list of cooperative games that fit this bill. Today, we take a look here at the Top 10 Cooperative Board and Card Games with an App!

So, Descent has a sordid history for me. At the end of the day, I hated the 1st and 2nd Editions of Descent because they were one-vs-many games! One player played the “DungeonMaster” (DM) trying to kill the rest of the players. Here’s the thing: I hated that. It reminded me too much of early Dungeons and Dragons games with a vindictive DM trying to kill the players. And that was never fun. And the rules for Descent were too complicated. And because of the one-vs-many nature, you couldn’t question rules without creating a hostile environment. I really despised the game. When I heard there was to be a 3rd Edition (well, not a third edition per se, but a new version) that was fully cooperative (where the app took the place of the DM), I was in! Unfortunately, Descent: Legends of the Dark has been very divisive: some people love it, some people hate. it I didn’t love it myself, but it’s so interesting in a different way, it needs some recognition on this list. Take a look at this review by Tom Vasel of the Dice Tower to see if you might like it: this is a very thorough and well-thought out review which might help you decide if you like it. Another interesting review from the Shut-Up and Sit-Down people paints it in a more negative light. 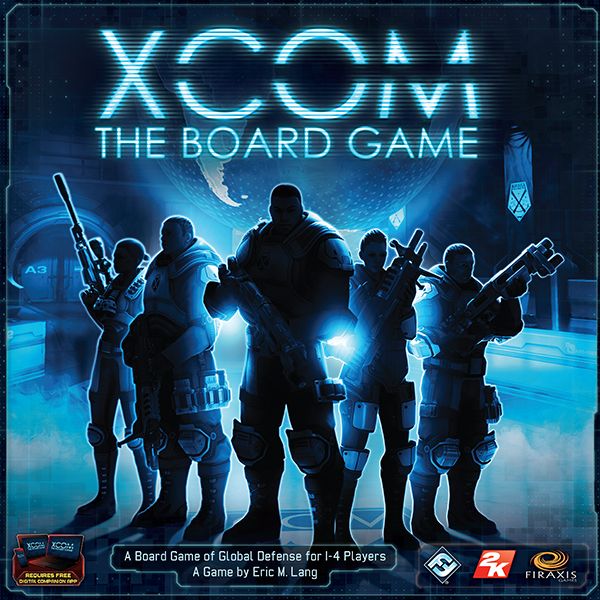 X-COM The Board Game is probably the oldest game on this list (but see #9): it’s an older Fantasy Flight game that you can’t seem to really get anymore.   This is a cooperative, real-time game about researching tech, protecting locations, and completing missions with your team.  The game has a push-your-luck mechanic as you decide how much to roll and re-roll as well.  This game was surprisingly fun, given that it was a little bit of a bear to get into.  In the game, there are 4 positions which must ALWAYS be populated, which makes it difficult to play at most player counts except for 4.  Players “commit” resources during the real-time phase, and then you “resolve” the resources with some dice-rolling (researching, protecting, missioning).  Real-time, resolve, repeat.

The rules are almost all in the app, which we all agreed was not the best decision, as it was sometimes too hard to look up rules.  Even though this is a real-time game, we chose NOT to play real-time as the game was more fun if we could just slow it slightly; luckily, the game allows you (in certain modes) to “pause” as you play.

We didn’t love the game but we liked it! It was a bit random (because of the push-your-luck dice mechanic), we didn’t love the rulebook but we liked how it walked us through the game.  We probably wouldn’t play it strictly real-time, but we still had a lot of fun playing.  All of those caveats are why it sits at number 10.

Stop Thief is a game from Restoration Games, resurrecting the old Parker Brothers game from 1979.  (Yes, you read that right, 1979!!) The original game was a one-vs-many game, where one player played the thief trying to get away from the other players.  The thief moves around the board “in secret” (hidden movement) stealing stuff, and it’s up to the other players to try to deduce where the thief is and (as a team) stop him!!! The newest incarnation uses the app to run the thief so the game can be played fully cooperatively (if desired: the original mode is available as well).  This hidden movement, press-your-luck game, and deduction works pretty well as a fully cooperative game.  The app is kind of cool because it uses sound to give “clues” about how the thief is moving.  It’s a bit light and it plays in about 20 minutes.

Last Defense is a light, cooperative real-time game I got at Target for under $20 (I think it was $15 on sale). The app and the game are very colorful.  Unfortunately, the app didn’t seem to get the margins right on my ipad, so some of the graphics were cut off. 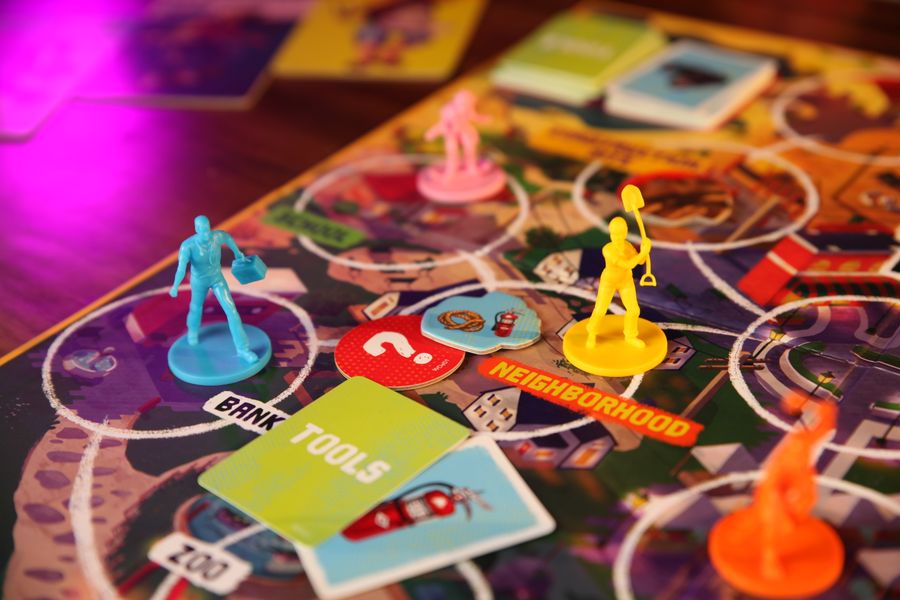 This was an “end-of-the-night” game: it’s simple, only takes 20 minutes (as you explore the board in real-time and gather tools).  The app is used mostly for “announcing” where monsters attack the city, but it definitely is thematic and really contributes to the mood of the game.

Last Defense has some problems (only 2-6 players: no solo mode) and the app could be better (needs updating), but for the price, it’s a pretty fun light real-time cooperative game.

The Escape Tales games are three separate Escape Room games that use an app to help you you through the adventure(s).  Each of the adventures is fairly hefty (about 3 game sessions to play) and kind of dark.  The app is necessary, but it generally isn’t too splashy: it just helps tell the story.  (There were a few cool puzzles here and there in the app itself).  The app generally helps you manage the state of your game.  We reviewed Escape Tales:  Children of Wyrmwoods here and really did like it. Most of the time, you want the app on your iPad (for real estate reasons), but I was able to use just my phone.

6. A Tale of Pirates 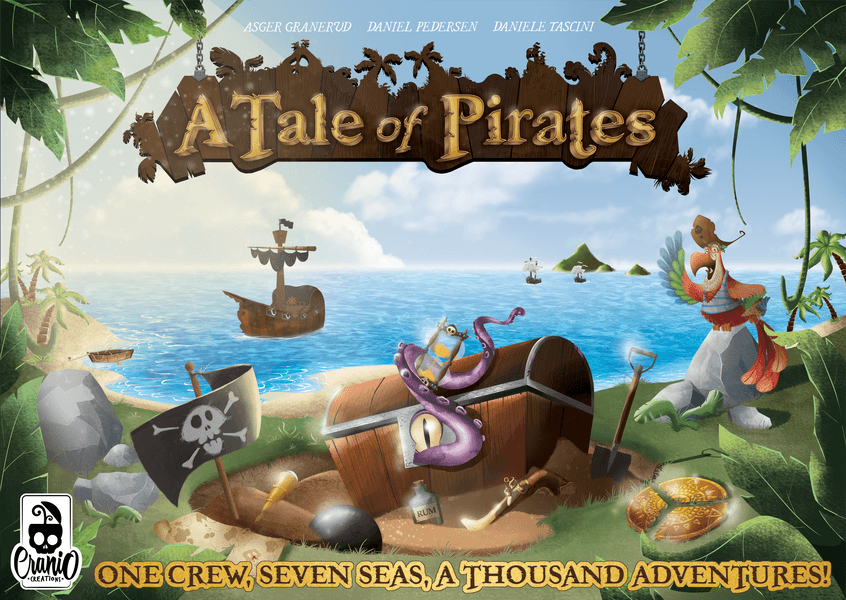 A Tale of Pirates is a cooperative real-time pirate game that made our Top 10 Cooperative Swashbuckling Games!  I had originally gotten this game for my friends Charlie and Allison as a birthday present, and I fell in love with it after playing it! 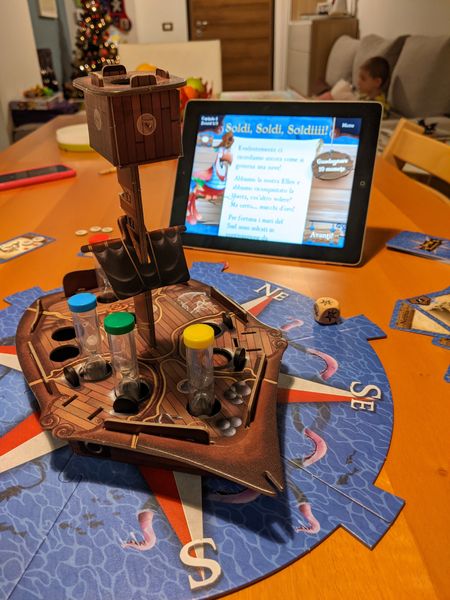 The app is fantastic, maybe the  best one on this list, as it is easy to run, easy to read, and plays thematic music as you play!  The game has amazing table presence (people will stop by and ask “What are You Playing?”).   There’s also an ongoing adventure for the pirates, which Charlie and Allison have finished because they loved this game so much!  Players take timers (this is a cooperative real-time game) and use them to “do things” on the pirate ship (load cannons, get cannonballs, scout, etc) and “new things” unlock as the adventure unfurls.

Rising 5 was an early review (see here) we did here at Co-op Gestalt:  We liked it enough that it made our Top 10 Cooperative Space-Theme Games!  This is basically cooperative Mastermind (the old board game) with a beautiful redesign (see the Vincent Dutraite art above and below) and the app is giving clues to you.  With the app, you can play solo as well.

One of the nice things about this game is you CAN play without the app, but then one person has to play the clue-giver (as per original Mastermind).

Mansion of Madness: 2nd Edition has a sordid past with me (which I talk about in my Top 10 Cooperative Fantasy Flight Games as well as my Top Cooperative 10 Creepy/Spooky Games), but we have started playing it every Halloween along with Arkham Horror: 2nd Edition!  Mansions of Madness is a cooperative adventure game where players explore an area, with the app guiding them to set-up pieces as they explore.

The app does a great job of walking you though a spooky scenario, with appropriate music making it even more creepy!  (NOTE: Journeys in Middle Earth would probably also be here as well, as Mansions of Madness and Journeys in Middle Earth are two Fantasy Flight app games with a lot of similarities.  If you made me choose, which you have, I would choose Mansions of Madness because the theme is so strong).

In this family of games (essentially all detective games), players use the app on their phone to scan QR codes on cards and locations to study items, investigate locations, question people, and explore the world.  It’s a simple app mechanism that the Chronicles of Crime family of games has used to very well.  This game made our Top 10 Cooperative Detective Games and was quite a hit at RichieCon 2021.  The thing is: there’s a number of themes, depending on what appeals to you!

Forgotten Waters is a fantastic cooperative storytelling game, where the app helps guide you through a (somewhat silly) Pirate Adventure!  The app (well, really a web-site) has voice-acting and sound effects that really escalate the storytelling experience.   Rather than reading from a storybook (like older games), all the story is in an App, and it is read to you!!! Players work together as a crew of Pirates searching for Big Whoop!  (Or was that Monkey Island II?… Forgotten Waters and the Monkey Island games share a lot of silly pirate DNA).  They sail the seas, search islands, and have adventures!  Forgotten Waters is so great,  it’s made numerous lists here: Top 10 Cooperative Swashbuckling Games, Top 10 Cooperative Storybook/Storytelling Games, and Top 10 Cooperative Games With a Sense of Humor!

At the time of this writing, there are 27 Unlock Games (see above).  These are little escape room games where an app (with some physical cards) guides you through an adventure. The original games came separately with one game per pack (and you can still get some of them that way), but now they come in packs of 3 (with three different games per pack).  The reason this game is the number one is because how much the Unlock games have pushed the envelope!  In 27 games, they have tried a lot of interesting things in the app!  Without any spoilers (because there are 27 games), I have seen: Shaking the app, listening to the app, blowing on the app, tracing on the app, talking to the app, passing the app!  The list goes on of all the things you can do in the app!  And some of my favorite escape room game experiences have been Unlock games with the app.  These games are fun puzzles that you can play solo or with a group!

We have reviewed a few of the Unlock games here and here.

5 thoughts on “Top 10 Cooperative Board and Card Games With Apps!”