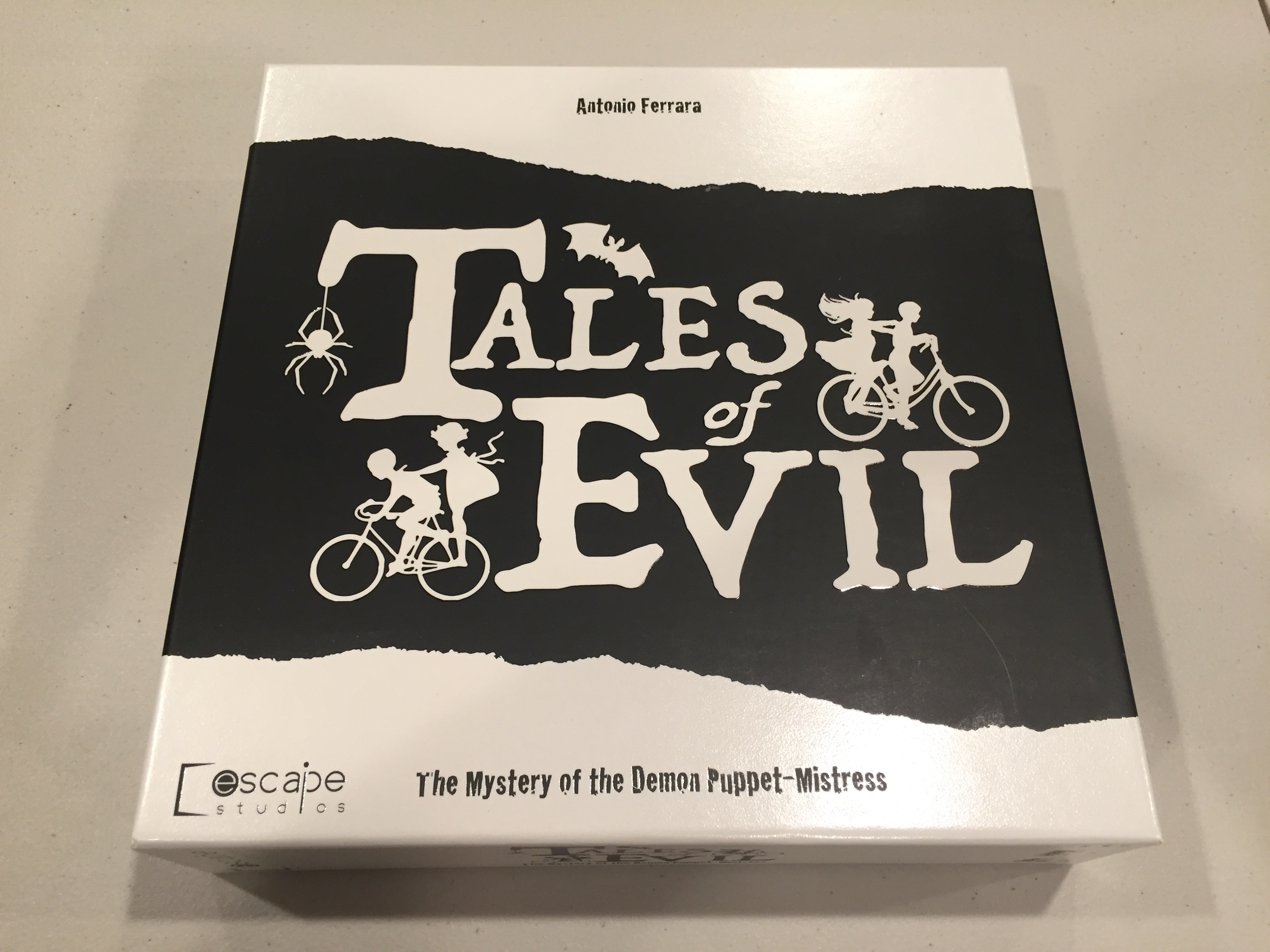 Tales of Evil is cooperative adventure game for 1-6 players. It was originally on Kickstarter back in December 2018. It’s been out for some time for the Kickstarter backers, but it just came out into retail: I picked it up from Miniatures Market and I know it was just released (mid November 2020) because the order was in hold until that came out. 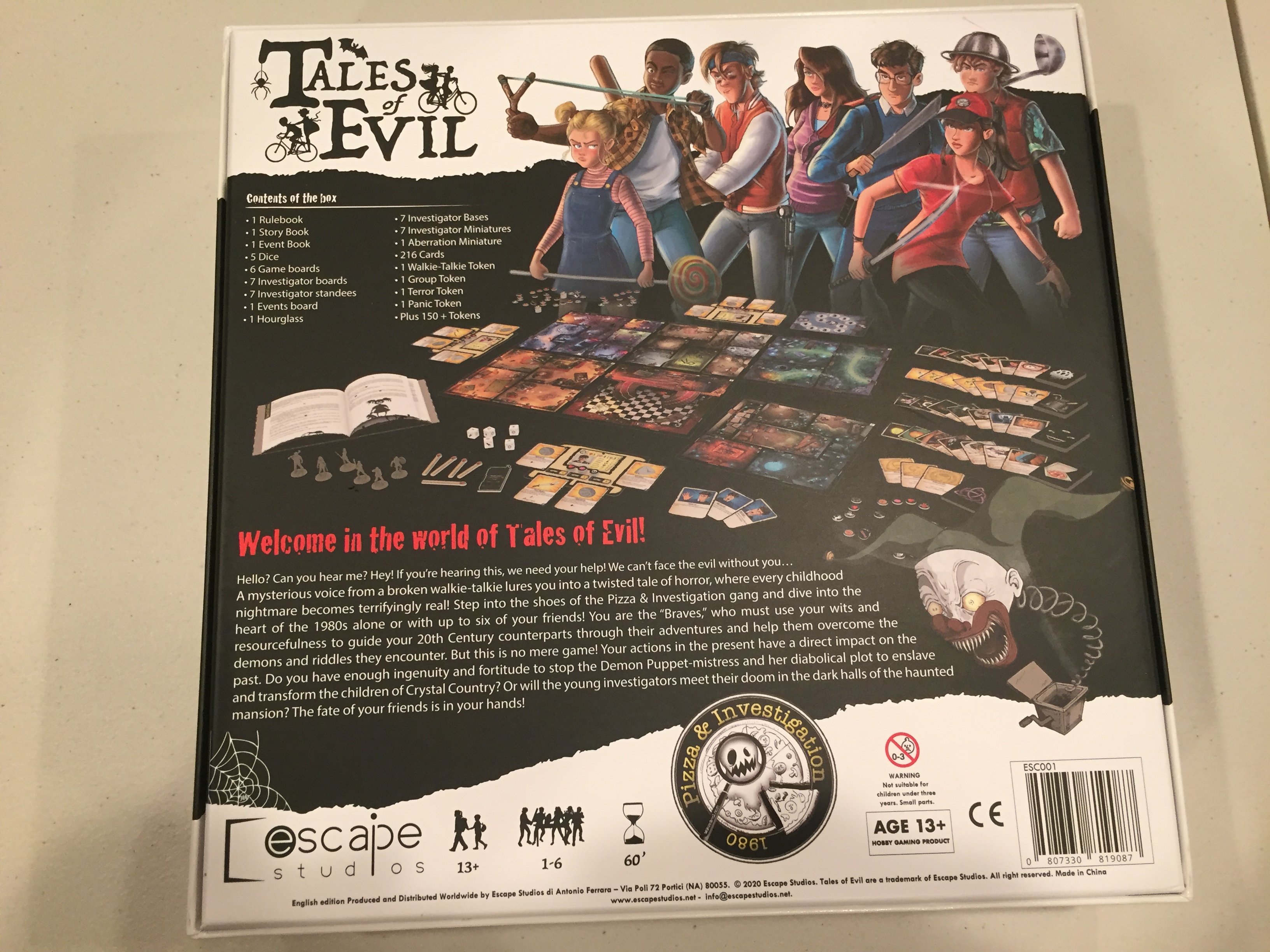 The theme of this cooperative adventure game is a bunch of kids (pre-teens-teens) running around and exploring supernatural phenomena (reminiscent of Stranger Things). The kids are in a club together called The Pizza and Investigation Club (which reminded me of somewhat of The Three Investigators, if anyone remembers that series of pre-teen books).

The Kickstarter bills the game as “The 80’s Horror Board Game Experience”. I’d say it’s more of an adventure/exploration game than a Horror game, but there are definitely more horror moments in what I’ve seen. If I were to try to summarize this game, I’d say Tales of Evil is a cross of the Arkham Horror, 2nd. edition Board Game (for mechanisms and gameplay) with the Stranger Things TV Show (for theme and setting) and the Tales of Arabian Nights Board Game (for the storybook elements). (If you don’t know what a storybook game is, see my Top 10 Cooperative Storytelling/Storybook Games for some really cool ones!). 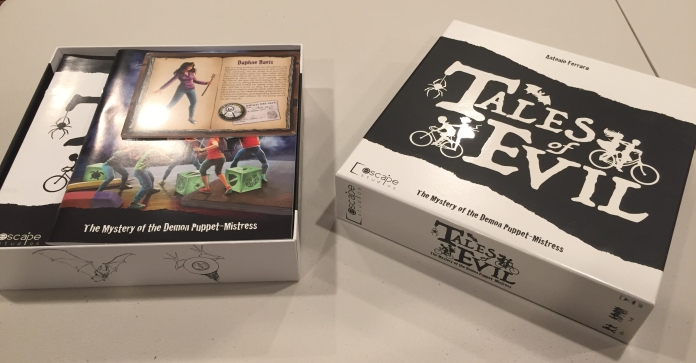 There are a number of books: An Event Book, a Rulebook, a Storybook for the main game (The Mystery of the Demon Puppet Mistress) and an expansion (see below).

There’s a bunch of cardboard (tokens see above) and boards (see below).

There are little miniatures plus some redundant standees (I am guessing the miniatures were a Stretch Goal in the Kickstarter). They are nice enough.

There are bunch of cards (over 200) in many different categories. (Grumble, see Rulebook discussion below).

There is also a 90 second sand-timer for a few activities in the game. This isn’t a real-time game per se, but there are a few places where it is real-time.

For a really good look at most of the components, take a look at the main Kickstarter page here.

Like Arkham Horror, 2nd Edition, there are a lot of skill tests where you use the specialized dice above to roll. These dice may be my favorite component in the game! The glow in the dark!

Oh, and the game really leans into the Horror theme: you get a “Horror Movie Poster” for the game! See below!

So, the rulebook looks like it’s pretty good. But you’ll notice the “Content” section only LISTS the components without any pictures or marking!!! Arggh!! This was VERY FRUSTRATING as none of the backs of the cards in the game are marked and a lot of the icons are unclear at first. So, let me help you out: the cards are presented … near the back of the book!!!

My advice to you is look at the contents list while correlating the cards with the list later in the book (see above two pages). I feel like this section should have been further up front!!! I was very frustrated until I found this.

So, I will give this game some props: it tries something different with the rules. Since the game is Storybook based, Tales of Evil tries very hard to make the rules come out when they are needed IN THE STORYBOOK. The designer makes this note (see above) in the very first pages of the rulebook. The rest of the rulebook is more of a reference guide which you can reference later in the game. 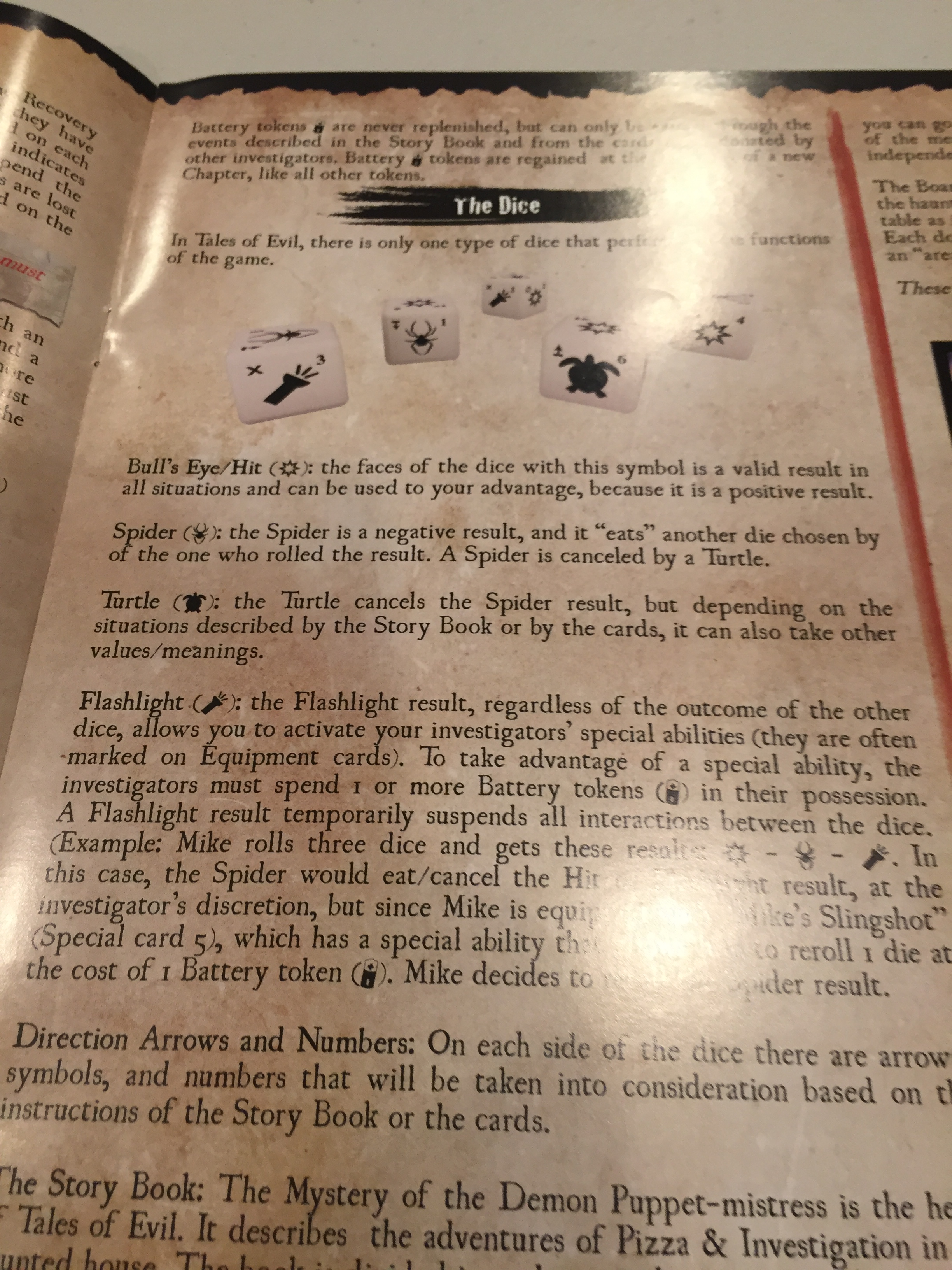 This definitely feels like a Kickstarter rulebook. It just needed a little more love. But it was enough and I was able to get into my first game. 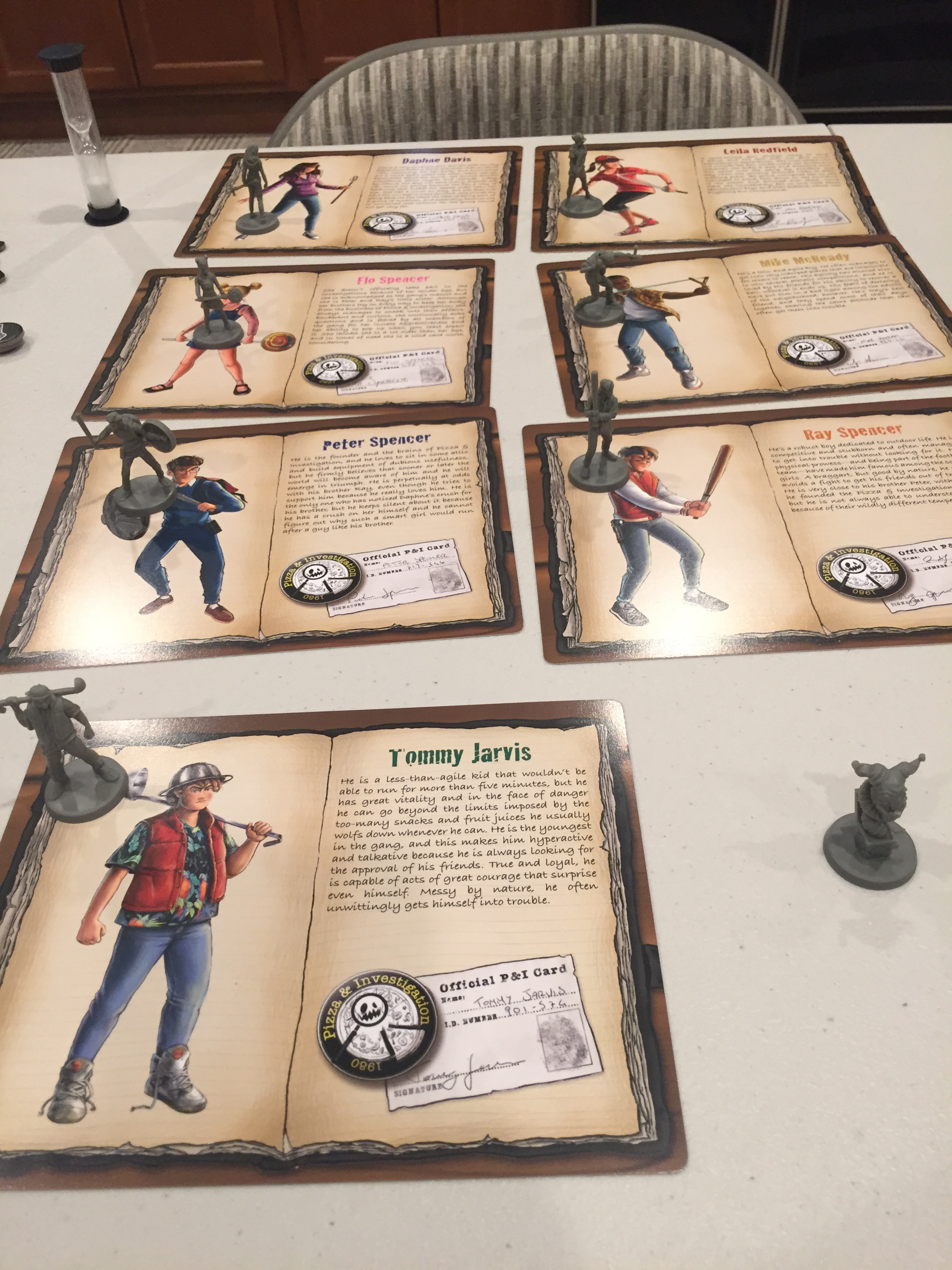 In Tales of Evil, each player takes the role of  one of the kids above.  Each kid has different powers and starting equipment and a different backstory.

The main mechanism in the game is rolling dice and trying to get a number of “successes” on the dice.   The Bullseye on the dice represent successes. 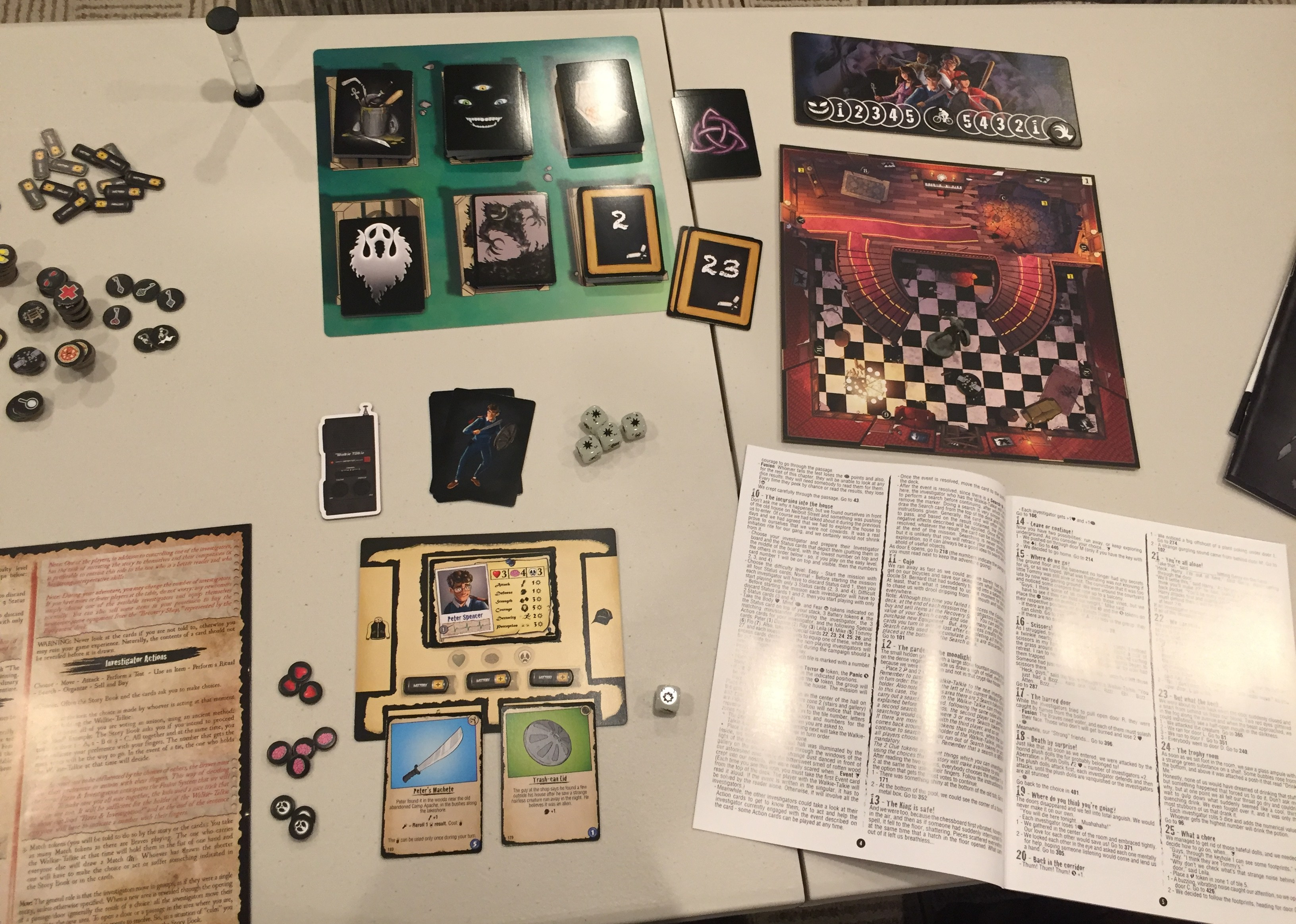 Like Arkham Horror, you explore some boards (actually, that’s probably more like Mansions of Madness, but the exploration elements are in both): see above.  As you explore, you read entries out of the Storybook and make decisions (like most Storybook games), reminiscent of Choose Your own Adventure games.

You and your fellow players explore!  Each game, the ‘goal’ of the game is different, depending on where you are in the story.  Players explore, read storybook entries, perform skill checks/combat, and generally try to solve some mystery in the game!

That first game took a while to set-up.  I suggest you set aside some time to punch everything out and try to absorb the rulebook (like I said, it’s a Kickstarter rulebook so it needs some love).  I needed one night to get everything unpunched and set-up before I started my first the next day.

Does this game follow Saunders’ Law?  Yes! I played my first game as Peter Spencer (the founder of the Pizza and Investigation Club).  Although the game prefers multiple people, the storybook seems to always keep in mind solo play.  For example, at one point, I was being attacked by something and “all other players” were supposed to help me, but since I was the only character, there was a special rule for the solo player.

I played through my first game in about an hour.  I saw a lot of the mechanics, and I believe I can teach this game now.

So, remember earlier when I said this game was weird? There’s this thing called Fusion in the game that’s … weird. It will probably either entice or disenchant you immediately. When the word Fusion comes up in the Storybook, you immediately start the timer and have to do something IN THE REAL WORLD IN REAL TIME. For example, to get a box out of a fountain, I had to take off my shoes and socks IN THE REAL WORLD AT MY GAME TABLE. If I failed this activity, I would lose some health or something like that.

Why is there a spoon in the picture above? Because the Fusion system demanded I go get one (corresponding to a challenge in the game).

Thematically, the Fusion system is described as “Your current life affecting your teen life in the 80s! It’s a feedback loop!” This game is definitely marketed towards people who grew up in the 80s, so it’s definitely hitting that market. Mechanically, this Fusion system is both engaging and disengaging at the same time: You are literally engaged doing something weird at Fusion events (like getting a spoon or taking off your shoes), but it also “takes you out of the game” as you were concentrating on these 80s kids, and all of a sudden you are doing something weird!

When I was explaining this game to my friend, he was very excited!

As soon as I explained the Fusion system, my friend CC got a funny look on his face, “Wait, what?” This Fusion thing may completely disenchant a lot of people. I am keeping an open mind for further plays, as I think it may have the potential to do some really neat things in the game! The rulebook alludes to taking you to some cool web sites, or exploring some history on the web (ala Detective by Portal Games), but it’s really unclear how this will play out. So far, it’s been … underwhelming. But I am keeping an open mind.

There several other things that Tales of Evil did to try to make the game explore different cooperative mechanics.  I am not sure what I think of these, but they are original ideas.

I don’t know if I like these mechanisms, but they definitely feel like the kind of things kids would do.

So, this game is a wild ride. I think you might know right away if you’ll hate it or love it. The components are great and the theme is very well-executed. The Fusion system (with real-time real-world events) is weird. The choosing matches idea is interesting and thematic, but I worry it will take away from cooperation in the game. The quick choice mechanism promises quicker game play, but it may trivialize some choices.

I don’t know what my pronouncement of this game is yet. I am keeping an open mind, but I really need to play it with more people. Like most storybook games, I think this game will be MUCH better with more people participating.

There’s some really interesting ideas in here! I am hopeful this go over well with my group. Be on the lookout for Part II of this review …