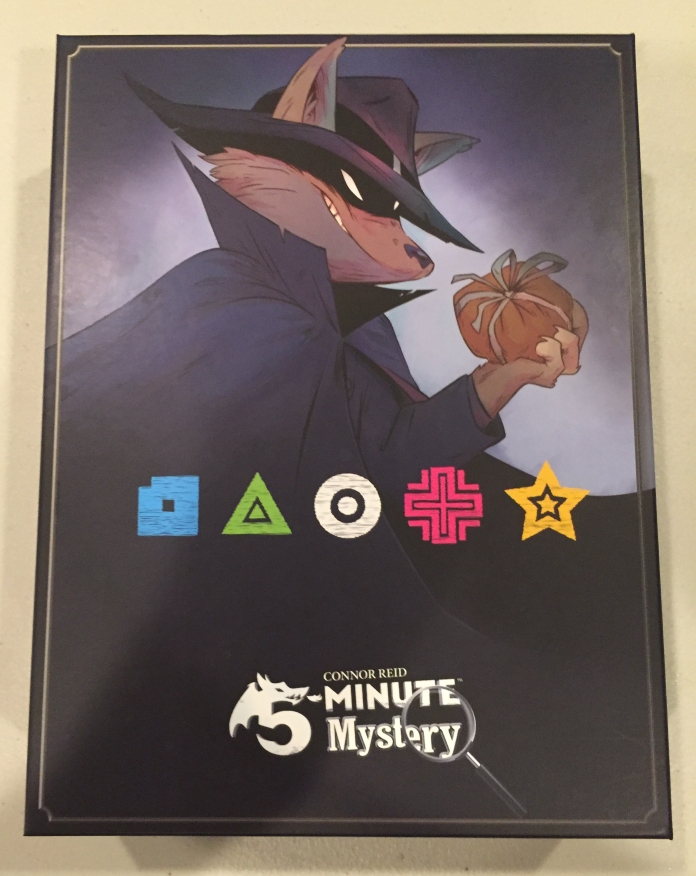 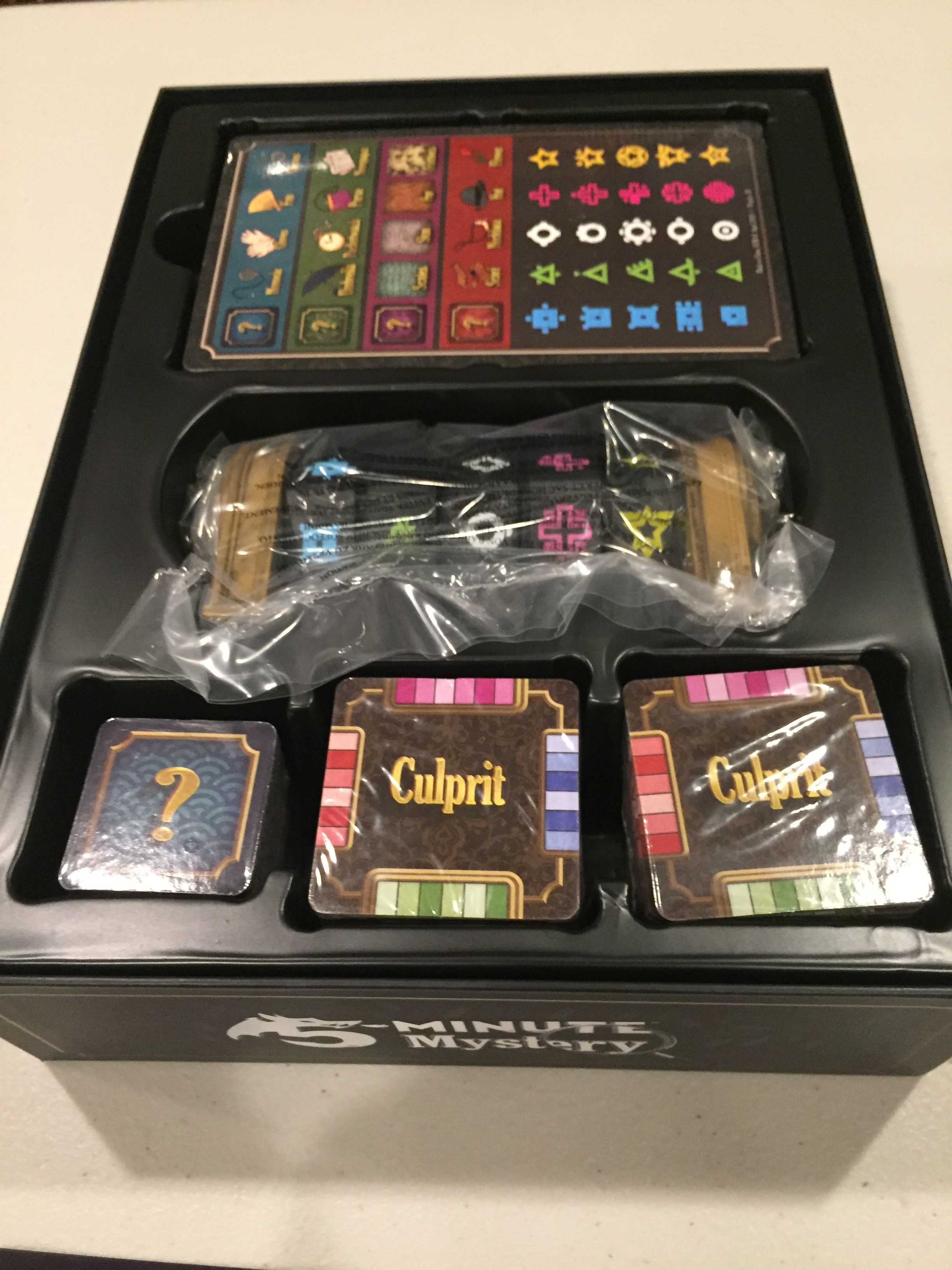 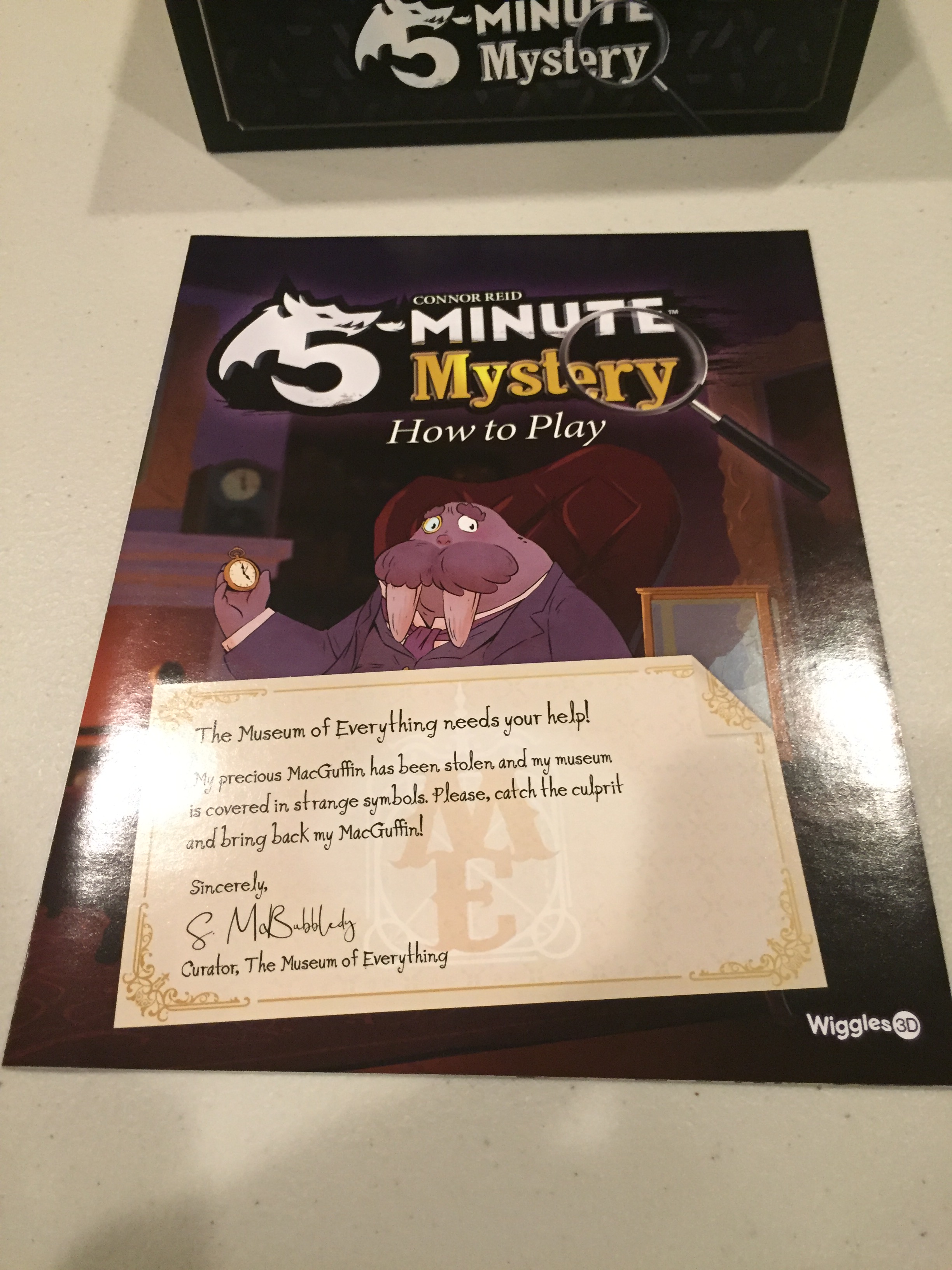 The Rulebook is pretty (see below for more discussion).

These are the “clues” you get in the game (with a few Red Herrings, ie., NULL clues). Notice the little colored bar on the bottom of each: these will match or not match the Culprits and describe some aspect of the Culprit. 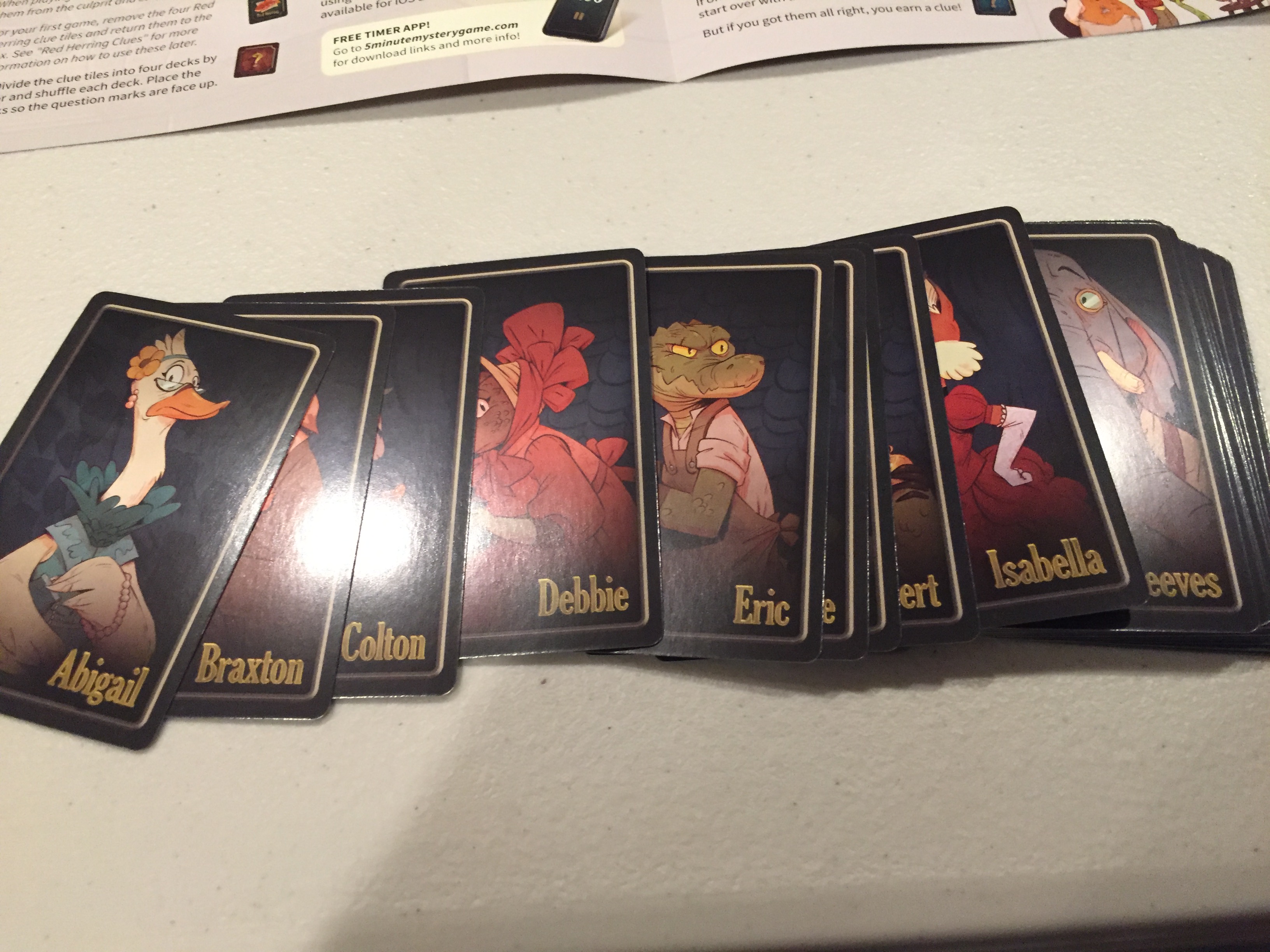 The Culprits are in two decks. The deck above is the cards the players keep in their hands: as they eliminate suspects, these hands (above) dwindle until down to the last Culprit … and the solution to the Mystery! 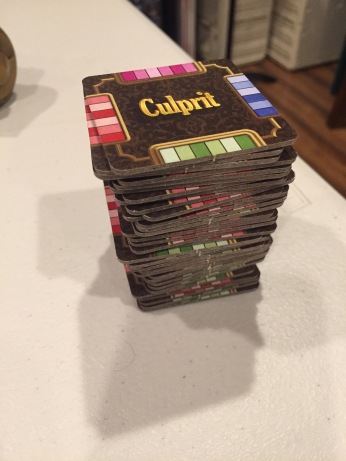 The Other Culprit cards are the ones that actually identify the Culprit in the mystery! At the start of the game, you choose (usually) one of the Culprits and put it in the middle of the board, with the colored edges side (right) showing!

There are many mysteries in the game, but usually you have to catch one or more culprits. The Mystery card (above) is the intro Mystery!!

The find the clues, you have to “search” the rooms above. Each room is a little different, but the art is gorgeous!

The cornerstone “gimmick” in the game is the Codex. Each room has 5 of the those symbols “hidden” in the rooms: you use the Codex to remember what symbols were in the room. It would have been just as easy to use a pencil and paper or any other mechanism, but the Codex is chunky and feels nice to turn. It’s a gimmick, but it works. 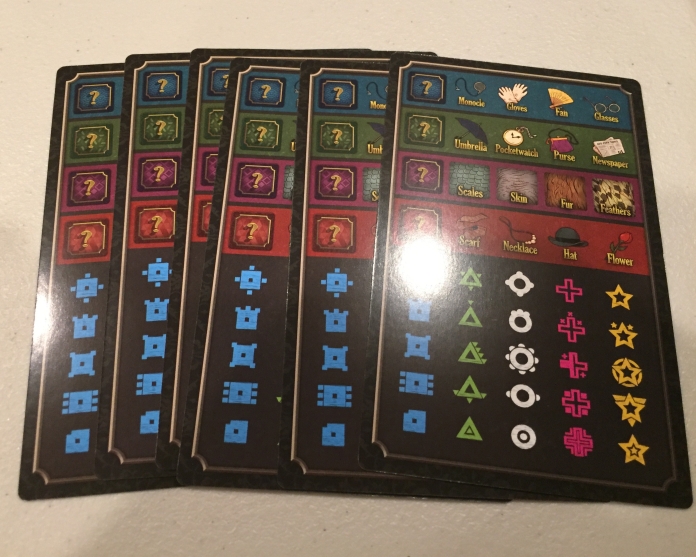 The Player Reference Cards (above) show all the symbols that can appear in the rooms, as well as what the “clues” notate. Each Clue is a different color type, and represents a different set of aspects. For example, Red Clues are “Skin-type”: scales, feathers, skin, or fur.

The Rulebook is well done and easy to read.

The Rulebook is more of a pamphlet than a rulebook, but it shows pictures of set-up and all the components like normal game. I was up and going pretty quickly. 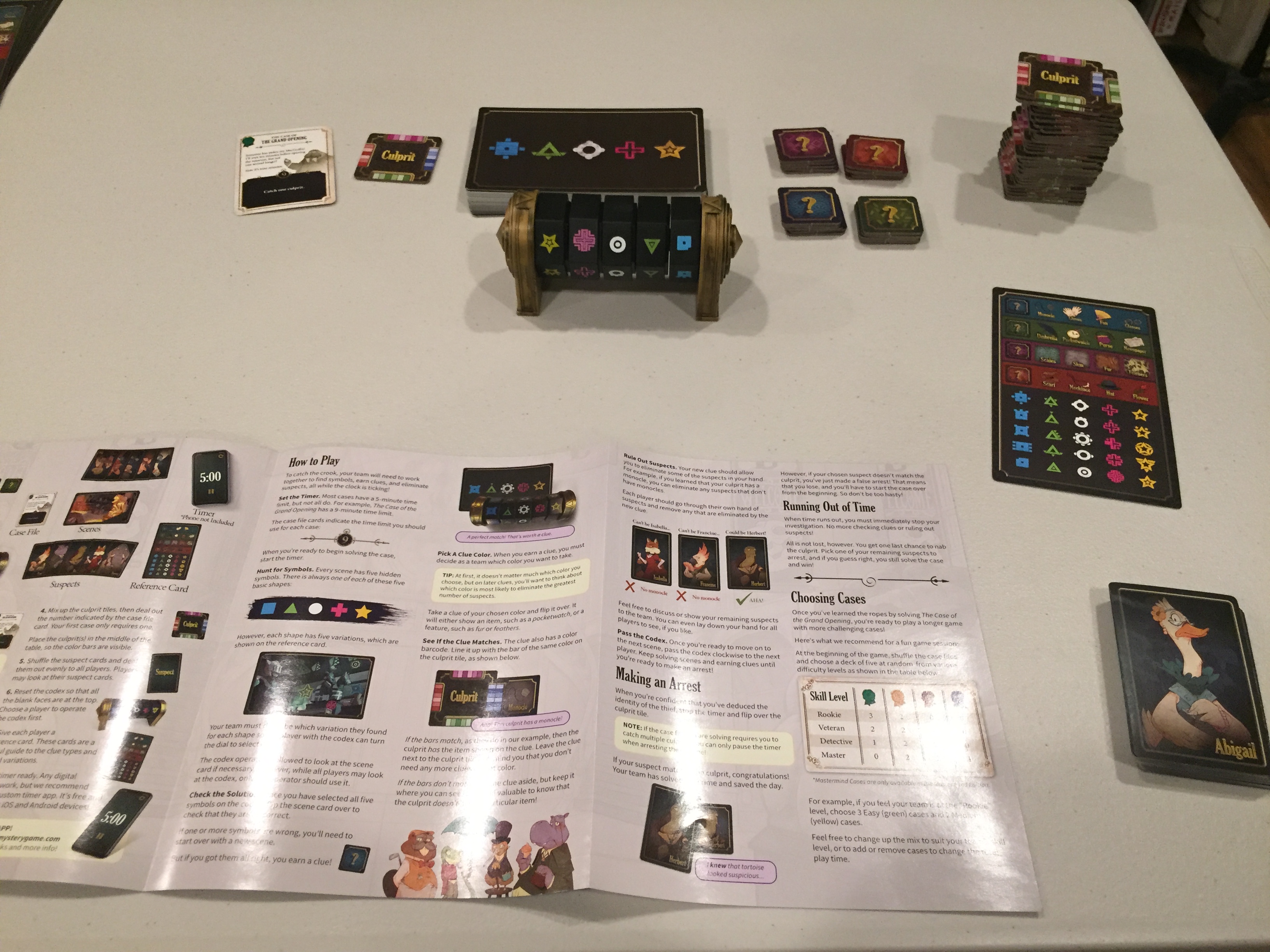 Gameplay is very simple. There are two phases to repeat! 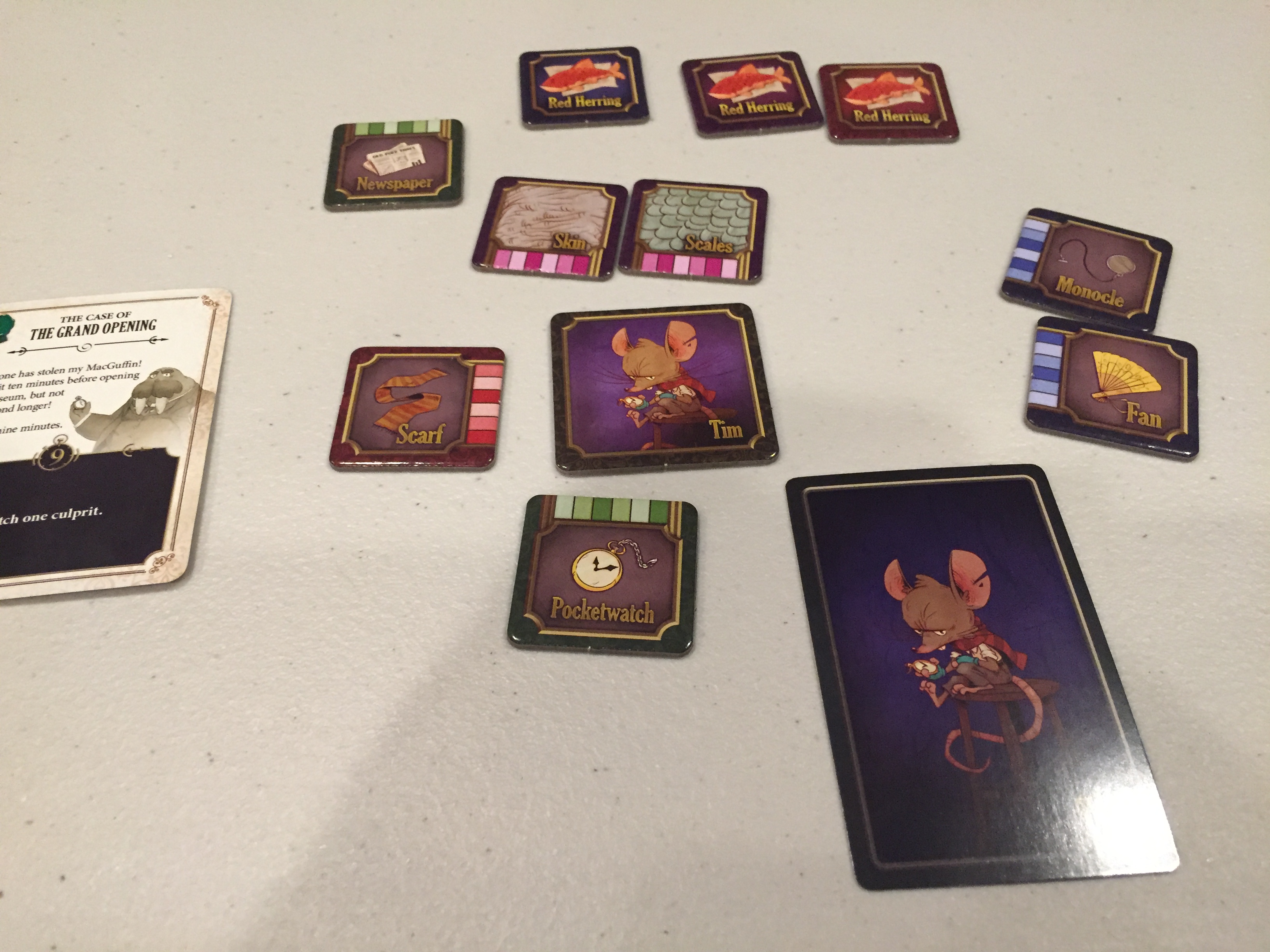 Continue until you run out of time (each Mystery has time-limit: we just set a timer on a phone, but you can download an app) or you think you know! At that point, turn the Culprit card over!! Did you get it?? You Win!

Above is a winning game where I thinned the possibilites down to Tim the mouse!!!  The last card matched the Culprit! A Win!!

So, there are solo rules for the game. Hurray! They followed Saunders’ Law! These rules appear near the end of the pamplet: 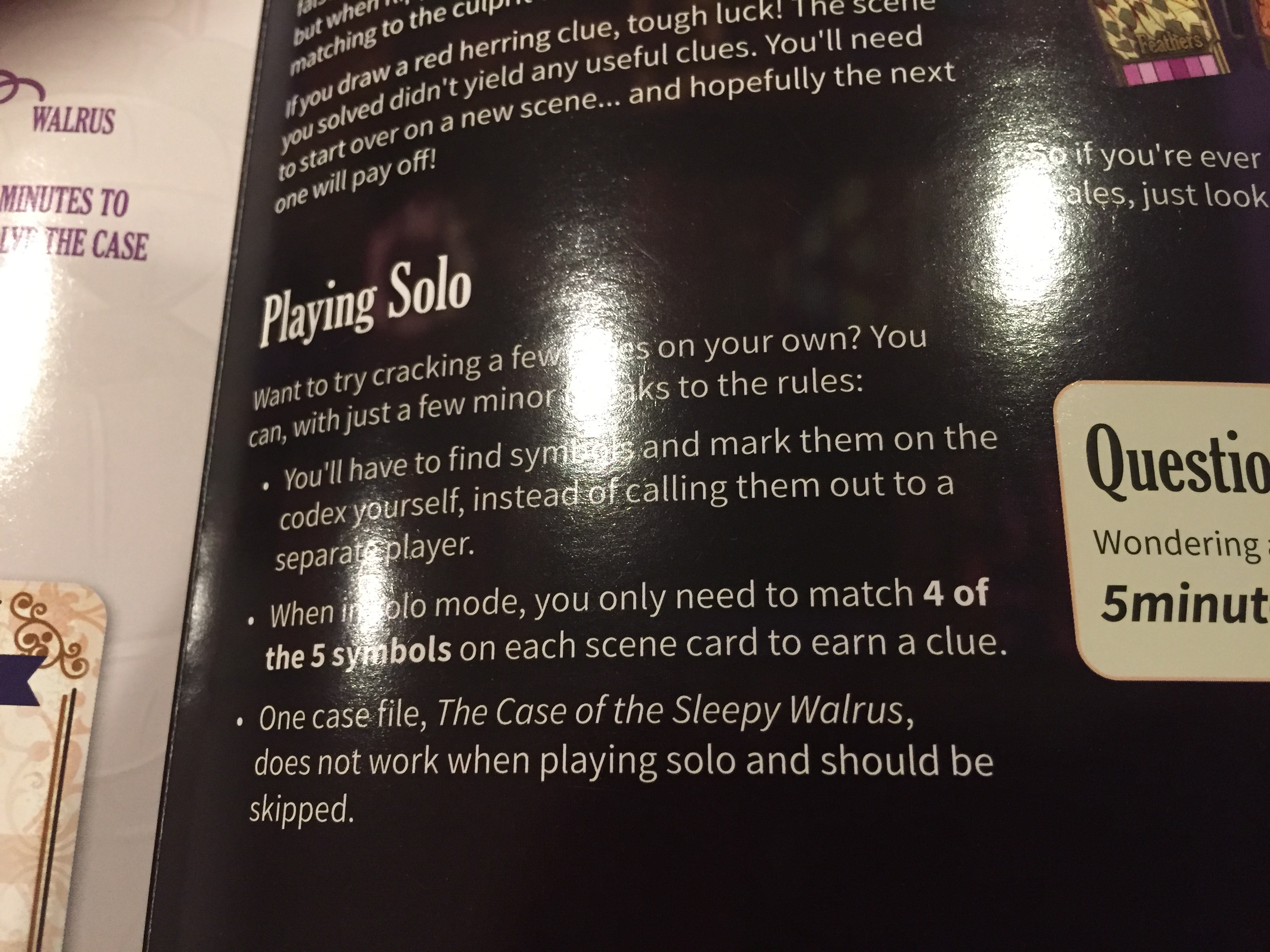 So, basically the only real change is you have to do everything yourself and you only have find 4 out of 5 symbols on the room cards. Here’s the thing: I did not enjoy this game solo. It wasn’t fun. My least favorite thing about the Unlock games is “looking for hidden symbols”, and that’s what half this game is. I played a few rounds with the Codex looking for symbols and had NO FUN. I ended up just getting clues and matching them. Even then, I didn’t have a lot of choices: I could only choose a clue from a pile?

I was happy that there were solo rules to teach me the game, but I did not enjoy this solo. It reminds me of my solo plays of Robit Riddle, Crusoe Crew, and Sherlock Holmes: Baker Street Irregulars: the game just feels “lonely” playing solo. BUT … would it work cooperatively????

Luckily, the game works well cooperatively. I had a good time in a 4-Player game! The part I feared the worst was the “Looking for Hidden Pictures”, but when 3 other people are all looking, the mechanism seems to work a lot better. And then the “choice” of what type of Clues to get seemed like a fun choice to make as a group.

We played 3 games total over the night. Each game went quickly! We had fun! Ironically, the first game is a 9-Minute game… and then they become 5-Minute games.

Sometimes it’s hard to tell if the Culprit has Skin, Scales, Fur, or Feathers. That may sound like a dumb thing to say (and it is), but in a timed game, you sometimes can’t tell! “Wait, is the Rhino skin or scales?” “The Penguin has feathers, right? The picture kinda looks like fur …” So, to combat this, they made the backgrounds reflect the skin.

The thing is: I can’t really tell what the backgrounds are! They are SO DARK, it’s hard to tell which is which! So, they did try to address the problem, but it didn’t work. In the end, if you aren’t sure, you just have to keep the potential culprit !!! Arguably, this made the game more interesting, as you had “not sure” pile of Culprits which is arguably more realistic? Anyway, it was a bigger annoyance than I expected.

Another minor issue: this is not a deep deduction game. You only get a choice of “which clue type” when you get a clue, so there’s a little bit too much randomness for a real deduction game … for a “real” deduction game, I’d want a lot more choice on how to eliminate suspects!! BUT, this is a realtime game which an 8+ age rating, so the “choose a Clue Type” mechanism works well enough. Just be aware: it’s not a deep game. 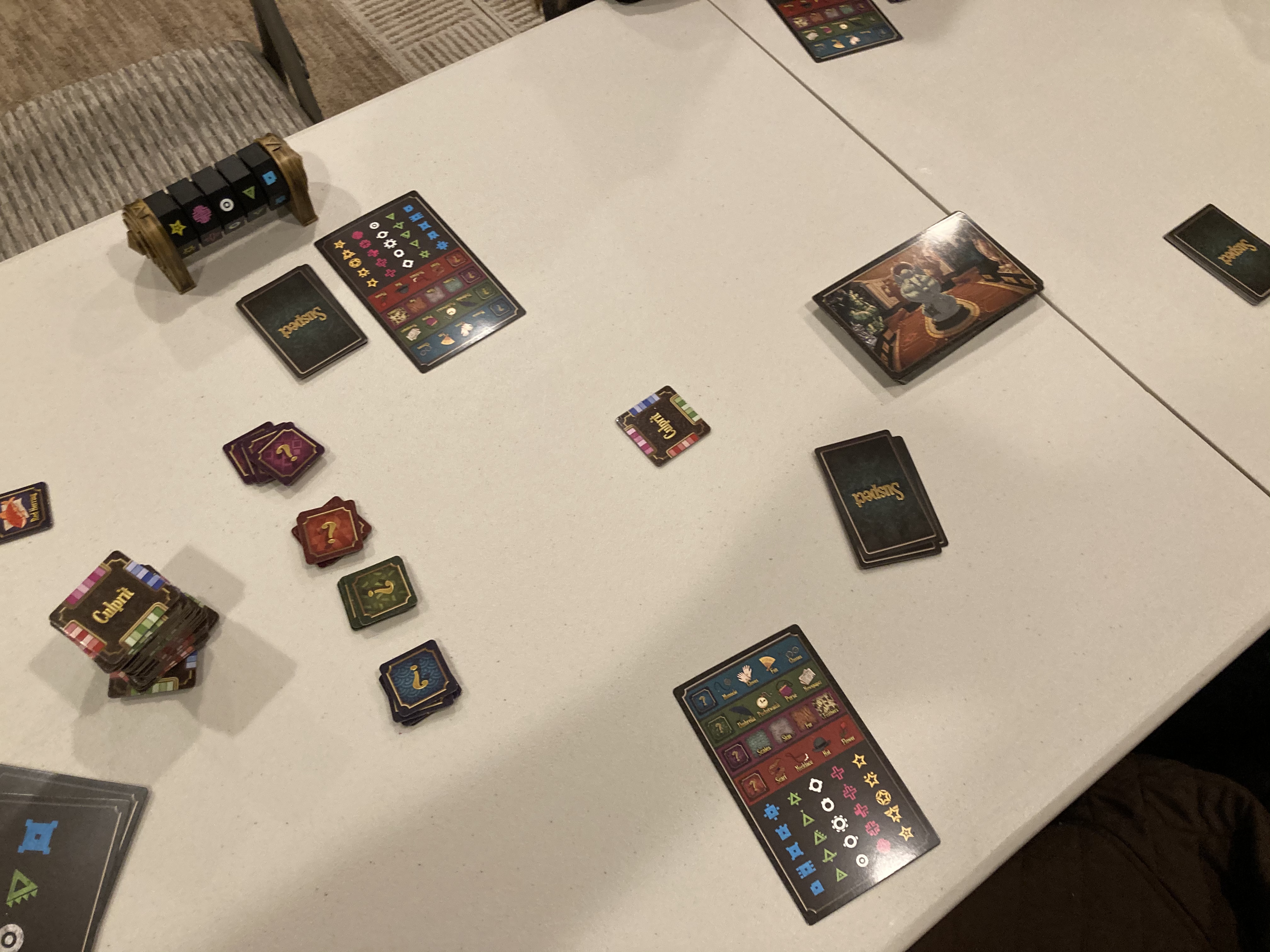 This is a good cooperative filler/party game for multiple people, but it’s not a deep deduction game. My group enjoyed it, but I also think it would really work well with families. Be Aware: I don’t think it works solo, but I am glad it has solo rules as a way to learn the game. The art and components are first rate: the only minor art problem was the attempt to note the skin type (as the backgrounds are too dark to read).

We had fun. 5-Minute Mystery will stay in my game collection on the main rotation! When we want an end of the night game, or a “waiting for Andrew” game, this will fit the bill.

3 thoughts on “A Review of 5-Minute Mystery”