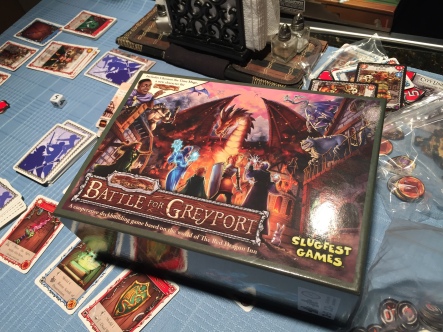 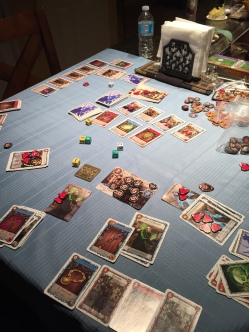 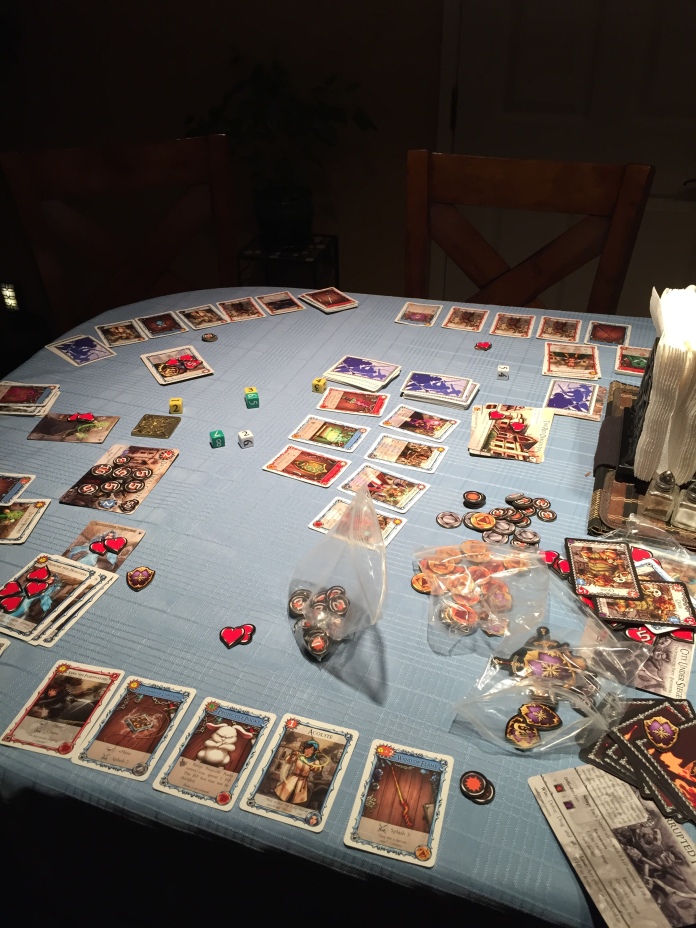 What a fun little game!  I have now played 2 solo games (and there aren’t any solo rules, *cough cough*) and 1 4-Player game.

The components are great: the art of the cards is very thematic, very fun to look at.  The art is almost comic-booky (but in a good way).  So, maybe that’s why I liked it so much.  My friends I played with also loved the art.

Because I got the Kickstarter exclusive, I got some extra content.  The “Taunt!” token is now a really hefty, metal token (rather than a piece of cardboard).  Cool!  This token is for helping out your bethren: if you need to get a monster of your friend’s back, you can Taunt him!  In the game I played, the “Taunt” degenerated into the Monty Python and the Holy Grail Frenchman: “Your father was a hamster, and your mother smelt of Elderberries!”.  Very keeping with the theme.

Some of the extra Kickstarter content you get is for a game called “Red Dragon Inn”.  I was slightly annoyed at HOW MUCH was for Red Dragon Inn.  I have played “Red Dragon Inn” a few times and liked it, but I don’t have it.  I bought this game because I wanted to play THIS GAME.  So, the fact that so much extra content was for a game I didn’t have was actually annoying.  I would have MUCH rather had an extra character, or an extra Scenario for this game.  You know, the one I supported on Kickstarter.

I was also slightly annoyed that there are no solo player rules.  I feel like this is a holy quest for me now!   Games NEED to have a solo mode so I can learn to play them so THEN I can bring them out to my games nights!  I have found that games go  over SO MUCH better if someone knows the game and can teach it.  (I have one game group in Las Cruces where I feel like we can learn a game from scratch, but I feel like this is a rare thing.  Most groups get annoyed if you have to learn a game then and there).

This is a fun game!  It’s a deck-builder with some twists.  You play heroes, but you can only play 1 hero per turn.  And you can play one item on your hero (but only if it’s the right type: physical or magic).  Since this is a deck-builder, you know you can get cards that let you play one more hero.

The game moves pretty quickly: since it’s a co-op, people are engaged even when it isn’t their turn (one of my major complaints of Dominion).  I found that we were all discussing the best way to fight as a team, which is what I think the game wanted!

The scenarios are clever, and the way you “Protect the Town” is neat:  at every point, you are at a location in the town.  Each location has a number of hit points, and you have to stop the monsters before they destroy the location.  If you protect it successfully (by defeating all the monsters), you get a bonus.  If you not, you get a penalty.

Rules:  5. Still annoyed at no solo rules, and the reason we played wrong was the rules are a little off.  Good enough, I was able to get going without a video.

Overall.  Fun game.  Everyone I played with had fun.  I want to play again.

One thought on “Review of Battle For GreyPort”