About a week or so ago, my copy of Rising 5: Runes of Asteros arrived.  Rising 5: Runes of Asteros is a cooperative deduction game for 1-5 players.  I had backed the Collector’s Edition (see over-sized box above) and have been looking forward to it for some time!  I had seen the Dice Tower folks play/review it months ago and they really liked it.  But, that was months ago!  I have to admit to being mildly annoyed that the Dice Tower reviewers got their copy well-before the people (like me) who kickstarted it.  But, I understand!  The publisher wants to generate interest in the game and sending pre-copies to reviewers is a way to do that.

So what came in the box?

The game comes with really nice minis.  Surprisingly nice.  The different colors make it very very easier to distinguish the figures across the board.  I think if the figures had all been gray, this would have made it a little harder to distinguish (even though they are all very different).

The boards and side boards are gorgeous!

The top side board is for an expansion (the game comes with quite a number of expansion/variants) and the side board (mostly) is just to help keep track of the cards.  I don’t think the left side comes with the normal edition, but the top board does.

As you can tell, this game is beautiful!  The art of Vincent Dutrait is pretty fantastic. 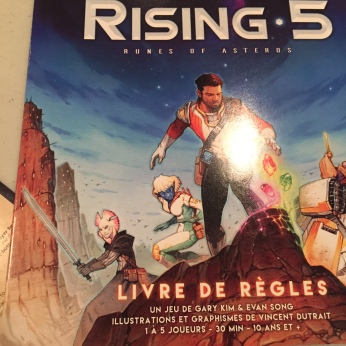 The game comes with two rulebooks (1 in English, 1 in French) and 2 double-sided sheets describing a plethora of expansions.  Seriously, there seem to be a lot of variants and ways to change up the main game!

The rulebook is pretty good.  In my first play, I was able to get up and playing pretty quickly.  So, this is a case where the rulebook was a relief … it wasn’t hard to read! Whew!

The rulebook has well-described solo rules.  They actually followed Saunders’ Law! And the rules for the solo play were good as well.  I was able to learn the game quickly and directly from the rulebook.   The solo rules change the base game very mildly; you play normally, but have another hand that is used just to “support” the main hand.

I was able to learn the game from the rulebook, play it solo that same night, and teach it to my friends the next night.  I had no trouble getting through this.  In fact, the great art and design made me want to get through this.

The game is a cooperative deduction game.  In it, all players are working together to find the pattern to keep the gate sealed.  At its core, Rising 5 is all about finding the right pattern on hexes in the middle of the board.

The players must find the right 4 hexes to put in the middle (there are a total of 7 differently colored hexes) and put them in the right place (each hex must go to an exact place).  That’s made a little easier because there are always 4 hexes in a grid (like above).

And that’s the fundamental puzzle of the game.  (There are symbols on the hexes, but it’s the color that matters).   As you play, you get hints as to the symbols are set-up (see how to get hints below).   To some of you, this might remind some of you of a game called Mastermind from the 1970s.

That’s where the similarity ends.  This game had a lot more going on around this core puzzle.  First of all, there is a level of indirection on the hints.  Rather than tell you which hex colors are proper (and in the right place), the hints are given in the form of some spirit animals.  Yes, that’s what I said. 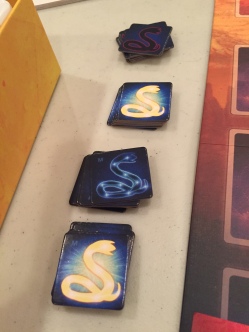 So, when the game gives you a hint, you get something like this:

This hint tells you about the current configuration of spirits, not the hexes!

This hint tells you that 3 of the 4 hexes are the correct color, but one of them needs to go.  But unless you know the correspondence between hex colors and spirit creatures, that doesn’t help!

So, as you play, things happen which help you deduce the correspondence between the hex colors and the Spirit Animals.

To get a hint, you have to work for it.   You need to put  4 Silk Cubes on the 4 altars on the middle of the board to get a hint.  You can to get these Silk Cubes (little green cubes) in a number of ways!

Once you get 4 Silk Cubes, any character can spend a turn to get a Hint.

There are 5 characters and they are all have very different, but essential, assymetric powers.  You might think you are each player assumes the role of a single character throughout the game … and you would be wrong.   On your turn, you activate one of the characters with your cards and have them move, encounter, or get a hint.

At the start of the game, each player is randomly dealt 5 or 6 (depending on the number of players) random character cards.  On your turn, you choose which character (if any) to activate to move across the world, explore locations, fight monsters, or  consult at the altar to gain a hint.

This is part of the cooperative nature of this game.  Each player decides which character to activate on their turn to make further progress on the puzzle.

Like any cooperative game, there are many ways to lose, but only one way to win.

Red Moons come out which will advance the Eclipse track: if it ever gets to the bottom, the planet is melted and players lose!

Notice the Monster card above has a single Red Moon (above the giant 1) on it!  Every monster has at least 1 Red Moon.  At the end of the turn, all Red Moons on Monsters are summed up, and that’s how far the Eclipse Marker moves down.   Let’s hope it doesn’t get to the bottom … or else!

How Do You Win?

Solve the puzzle.  But, important note, the ONLY way to move hexes around is with the ORAKL character.  His special ability is to swap two hexes (either on the map, or from the side). 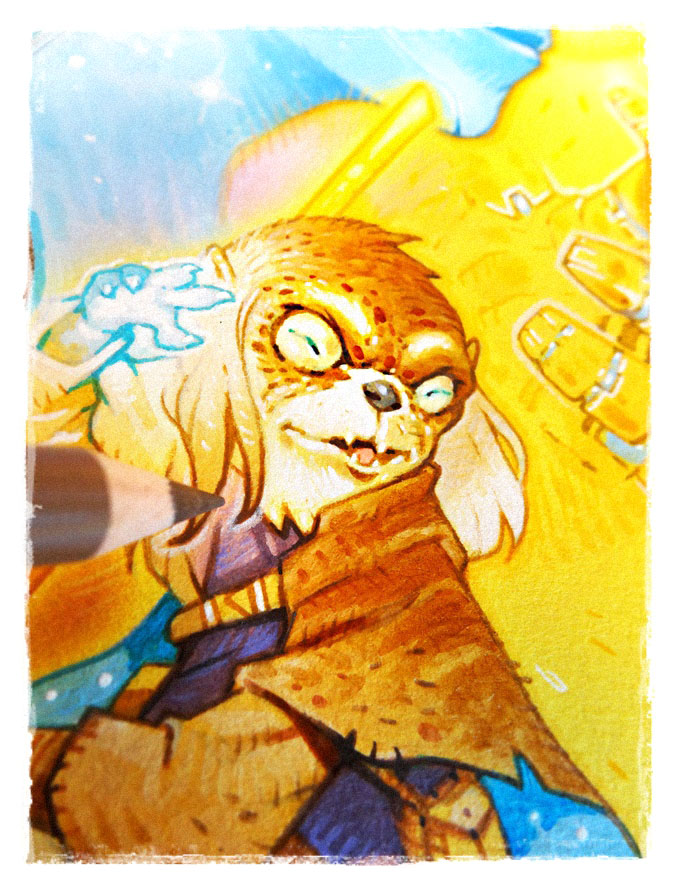 So, the only way to make progress in the puzzle is to activate ORAKL.  Most of the other characters have special powers which help you in the game (better combat, better movement, better Eclipse position).  These special powers give you advantages to keep the game going.  At some point, you have enough Silk Cubes so you can use a hint and see the result of ORAKL’s hex movements.   (One nice feature: HAL can copy ORAKL’s special power if he’s on the same location and also swap hexes).

This game is about swapping hexes with ORAKL’s power, fighting to get 4 Silk Cubes, analyzing the hints, and finally deducing what the final puzzle is.

The Lady or the Tiger

At this point, I should mention that this game is “usually” app-driven.  Usually, you take a picture of the board with the app (when you have collected enough Silk Cubes) and the app gives you the hint!  It also shows the history of hints to help the players deduce the final puzzle.

A few of things about the app:

All in all, the Rising 5 app worked well enough.  If, however, you don’t have smart phone, there is a way to have one player “pretend” to be the app.  That player has to sit out and just give hints.  So, it’s not the funnest way to play, but if you don’t have the app, you can still play this game.

Living In This World

Quite some time ago, a friend of mine strongly recommended Cryptonomicon by Neal Stephenson.  Cryptography and Turing?  Sounds great!  Only … I didn’t like it.  At all.  To me, it was long and wandering and didn’t get to the point.  After discussions with my friend Derek (who looooooves Neal Stephenson and got his Kindle autographed by him), we came to this conclusion: Derek agreed that Stephenson was long-winded, but he liked going along for the ride—he liked the universe.  Being part of the Cryptonomicon universe was fun, even if the story is perhaps overwrought.

What does this have to do with Rising 5: Runes of Asteros?

At the end of the day, this game is just basically Mastermind, an old game where two players played against other.  One player created a pattern, and the other player tried to guess it.  At it’s core, Rising 5 is Mastermind.

But, while Mastermind is abstract game with no theme …

Rising 5: Runes of Asteros has theme in buckets!

The main board, with two side boards/expansions (along the left edge and top edge)

The sun track is on the far right. If it ever reaches the bottom red mark, Game Over! Players lose!

Art book from the Collector’s Edition 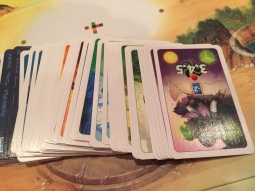 If you like the world the game lives in, then you are okay with all the flourishes to Mastermind!  At it’s core, this game is just Mastermind.  But all the stuff around it, I think, was fun!  It added a lot of color, theme, art to the core idea.  But, if you are a reductionist, you may not like this game!  If you can only see the Mastermind game at the core, you may be annoyed by all the flouishes.  Much like I was annoyed by all flourishes of Cryptonomicon.

At the end of the day, I loved the flourishes on top of cooperative Mastermind. The idea of having to work for your hints, forming strategy to when activate the characters, fighting monsters, finding relics and artifacts .. it all worked for me.  I liked it as a solo game.

My friends and I played as well (at 4 players) and we all loved it.  Everyone wants to play again!   We all joked that this game is WAAAY overproduced for what it is, but world is so colorful and bright, it’s more like joking that we got too much candy for Halloween.  No one was really complaining about the amazing art and theme …

I think a lot of people will really like Rising 5.  I think some reductionists may be annoyed by all the flavor and claim “It’s just Mastermind all prettied up”.  Yup, and how pretty it is.

3 thoughts on “Review of Rising 5: Runes of Asteros”