Unlock! Star Wars in the newest entry in the Unlock! line of escape room games: it just came out fairly recently as of November 2020. Recall that we really liked (mostly) the previous Unlock! Epic Adventures: see review here. How does this newest entry fare?

A Quick Look Inside

Like more recent Unlock! games, this comes with 3 adventures/escape rooms and a small simple tutorial game. 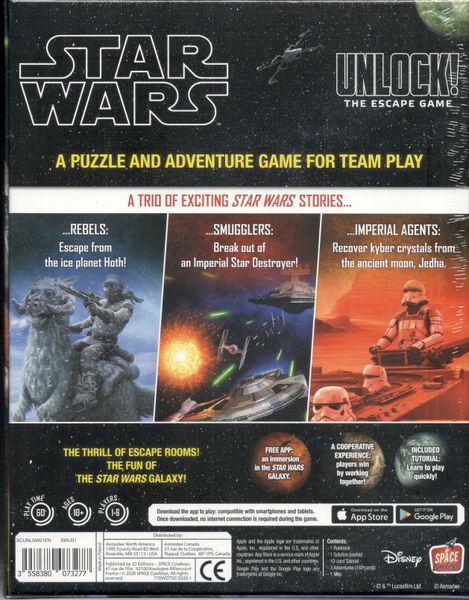 Like all other Unlock! games, this comes with a tutorial: this is for first time players to discover how Unlock! style escape room games works.  Surprisingly, this tutorial is different from every other tutorial!  If you’ve played ANY Unlock! games, you always see the same little tutorial.  The designers took and “rethemed” that tutorial for the Star Wars Universe.  Kudos for keeping the tutorial thematic!

Surprisingly, there are a few mods to the Unlock! system.

In every adventure here, you get to choose 3 out of 6 “helper” cards that will give you hints/extra abilities later in the game.  You don’t know what you are choosing at the start of the adventure, but it helps you stay engaged a little more since you get to “choose” some of your special abilities (above, I chose Inside Intel, Expert Pilot, Droid Specialist).    You don’t strictly HAVE to have any of these to win the game, but it makes the game a little easier.

Another mod was that the game  included a COMPLETE SOLUTION MANUAL TO ALL 3 ADVENTURE GAMES (see above)!  I have never seen this in an Unlock! game before!  I think it’s because the designers are expecting people “newer” to Escape Room game to try this out (Star Wars has a pretty broad appeal after all): I think they wanted to make sure people understood  how these worked by seeing a COMPLETE SOLUTION.  I think this is an acknowledgement that sometimes escape room games (not just Unlock!, but Exit and Deckscape) have some wonky puzzles.

The first adventure (Escape from Hoth) is probably the easiest and most reminiscent of the Star Wars universe. Basically, you feel like Luke on the Ice Planet Hoth in the first part of the Empire Strikes Back! I don’t like Hidden Number puzzles, and this one starts with a doozy that flustered me for a little. In the end, there were some cool puzzles, and some cool interactions with the app (literally). And a few canonical Star Wars characters make an appearance! I liked it ok, I didn’t love it. They rated this an easy puzzle, and I would agree.

The second adventure (An Unforseen Delay) was probably my favorite (except for one moment when they split the party). It felt like we were smugglers like Han Solo trying to escape from a cell in a Star Destroyer. Except for the amazing art and bad guys (Stormtroopers, Tie Fighters), this almost could had been smugglers in any Sci-Fi universe. It was fun. They rated this an easy puzzle, and I would agree.

The third adventure (Secret Mission on Jehda) was … tense. I didn’t like the idea that I was playing as bad guy (imperial spy). Weirdly, this worked in its favor, as it ratcheted up the tension as I was playing in the first 15 minutes! It really felt like I was “nervous” being on a planet trying to find some crystals! After I got into it, there were some really good puzzles, especially with the map. This was also the game whereI got the most frustrated. There were a couple of puzzles that were really wonky (“Really? That’s what I had to do?”) that really took me out of the game. In general, this was pretty good. They rate this moderate, I’d say it’s maybe a smidge tougher.

Recall that Unlock! games require a app on your smart phone/pad to run.  This one is no different: in fact, you have to download a brand new Star Wars Unlock! app rather than use the plain Unlock! app.   The designers have some new tricks up their sleeve: requiring an app gives them some flexibility and originality that they are still exploiting: I am happy to say  there were some new, fun ideas in here from the app!!

That said, this Unlock was not one of my favorites.  I felt like some of the puzzles were a little too mechanical and devoid of theme.  I went to the hint system far more than I expected to. Don’t get me wrong, this is still a good set of Unlock! Adventures: the puzzles are interesting, the art is good, and the hint system helps move you along at a good clip even when you get stuck.   I am glad I bought this, but I’d recommend probably recommend a different Unlock! set first to most people.

Having said that, if you like Star Wars at all, this is a good set of adventures to get. Also, if you are new to Unlock! and escape room games, this might be a good jumping off point: the adventures were fairly easy, and this also comes with the COMPLETE SOLUTION BOOK.  This COMPLETE SOLUTION can really help new players when the hint system fails (the hint system did fail for me once in the third adventure).

P.S. I expected the Star Wars Unlock! app to play John Williams’ Star Wars music. Nope, it played Holst’s The Planets. I am guessing that John Williams wanted a lot of money and The Planets was free to use, so they used that!

4 thoughts on “A Review of Unlock! Star Wars”