What’s a party game? A party game is usually a casual game you can pull out with a fairly large group of friends and jump right into! We’ve only recently (say in the past few years) been able to play cooperative party games! That’s right! Players work together in a big group! There’s now enough cooperative party games out there that we can put together a top 10 list!

Each party game below will show the Player Count, Ages, and Time, but Time is relative, as many party games you are “play until you get sick of them”! Most cooperative party games on here are of type Cooperative Guessing, but there are a few oddballs out (which we will note)!

Unlock: Escape Adventures are little mini-escape rooms that take about an hour to play.  They are pretty straight-forward and easy to jump into, as an App on your phone or tablet runs the adventure for the group.  They can be be great fun as players work together to solve all kinds of mysteries!  There are (at the time of this writing) 27 adventures over many sets (see above).  Unlock made the #1 spot on our Top 10 Cooperative Games With Apps here!

The only reason this is #10 on our list is that sometimes these escape rooms don’t work as well in larger groups: the clue cards are hard to share among many people, or some players may tend to take over and solve everything.  If your group dynamics allow, these Unlock games can be great party games!

Mystery Detective is the formalized version of a game I have played on many car trips: someone describes a situation, and you have to figure what it is.  For example: “Santa Claus is dead: what happened?”   Players ask open-ended questions trying to figure out why Santa died. In this case, there a little pictures on cards, and players asked questions about the pictures (see below).

This is a silly, open-ended game that is really fun on long car-trips (because you just describe the scene) and everyone can ask questions.  It’s a little lower on the list because not everyone loves this open-ended questions game.

In some ways, this is like cooperative Telestrations or “The Telephone game” you played as a kid.  It would be a little higher on the list, but it’s harder to get a hold of.

5-Minute Marvel is an oddball on our party list because most cooperative party games have some word-guessing.  In this card game, players have special powers and try to play cards to take down the current villain: By matching the symbols on your cards to symbols on the bad guy (see below for example), players work together to try to take down said bad guy!

It’s silly fun and easy to play up to 5 people!  And, you can keep playing, fighting bad guy after bad guy until you get to Thanos!

Muse is a little different than most games on this list: it’s only cooperative at 2-3 players, but it’s still a great party game at 4-12 players!  We originally reviewed it here!  In this game, players try to guess the appropriate piece of art chosen by a chooser, but obscured by other pieces of art in the mix.

There’s also some silly rules which govern what you can guess: “Strike a pose”, “Name a non-fictional sport or sport-team”, and other silly things.  The art on this game is fantastic and really helps bring you in.   This is a fun cooperative party game for the end of the night when you have a smaller group, still want a cooperative game, but want the casualness of as party game. 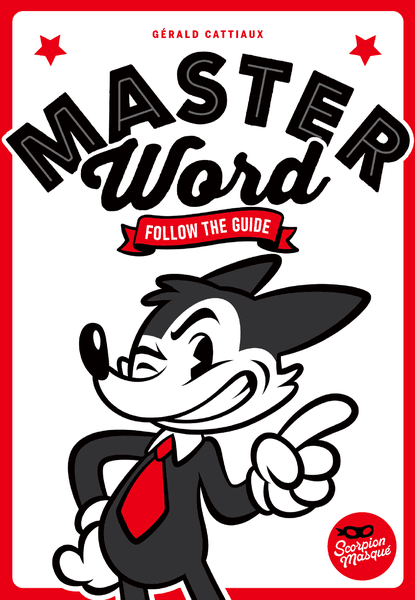 We originally reviewed Master Word here and it also made our Top 10 Cooperative Games of 2020!  This is essentially MasterMind meets a word game!  One player has to try to get the other players (working together) to guess the word he chose!

The components are really nice, with the cards allowing them to written on with dry-erase markers.  We have also had some success playing this online over discord!  Only one player needs to have a copy!

Like so many other games on this list, this is a cooperative guessing game with words!  In this game, a player chooses a word, only now letters of the word are missing!

The poker chips that come with the game are surprisingly hefty and kind of make the game just a little better!

So Clover is another word guessing game.  Each player puts cards on a clover, and has to write one-word clues to try to connect two words together.

The cards are then shuffled, leaving only the “one-word clues” and players have to guess how the cards fit together on the clover!  Everyone gets a chance to be the clue giver, and everyone else has to try to guess!  This is silly fun that has become very popular in my game groups!

Cross Clues is another cooperative word guessing game where one player gives a clue trying to tie together two words in a grid (on the edges), and the rest try to figure out where in the grid it is!

This is a timed guessing game, but we almost never never play with the timer.  This has been a lot of fun and an interesting twist on cooperative word guessing games, as the words are in the edges of the grid!

Just One is a party game that has worked for me in just about every party situation!  It’s worked with gamers, non-gamers, family, and even over Discord and Zoom!  It’s by far my most favorite party game: It also made our Top 10 Cooperative Games You Can Play Online!

We just played Just One last night with a group of 10 people: a couple of people paired up and all seven guessing boards were used every round (the guesser simply passes his guessing board to someone who doesn’t have one).  Doing this, you can expand the player count out just a little bit more!