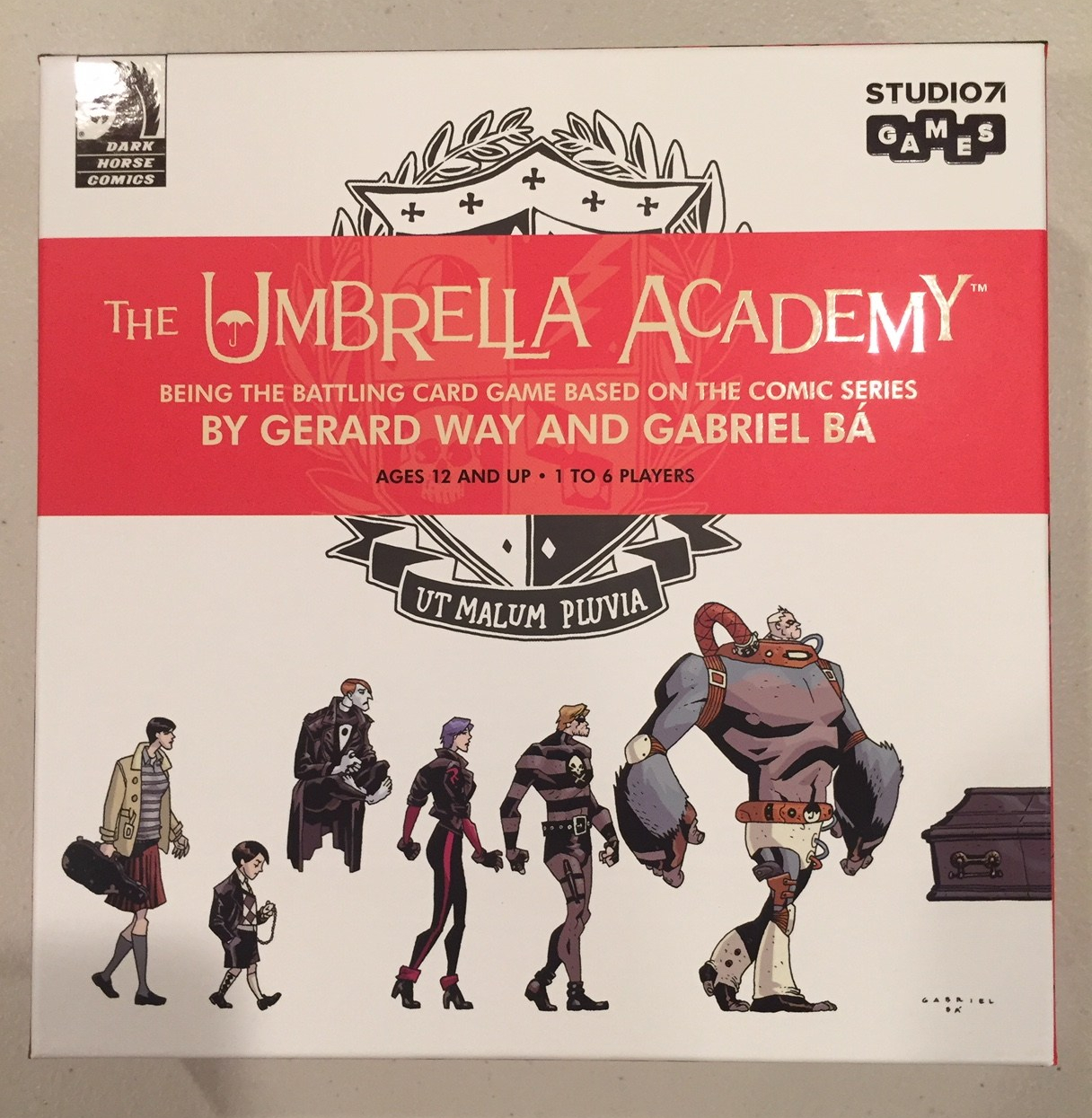 The Umbrella Academy is a Kickstarter that came out in mid 2020.  I typically like SuperHero/comic themed games (see my Top 10 Cooperative Superhero Board and Card Games), so I backed this one. The art looked pretty good.

I’ll cut to the chase. This game is terrible. Out of the box, the game is unplayable. I played one turn and just lost.  There weren’t any choices and I didn’t draw any decent cards.  Disgusted, I put the game away thinking I did something wrong: maybe I’ll try again.  At that point, the game sat at a 1 or 2 out of 10.

I looked here at the ratings on BoardGameGeek and saw a lot of 1/10 ratings. It wasn’t just me.   But someone did mention that there was an updated rulesheet on the BGG site. So, on BoardGameGeek: here’s the updated rules. See below, accessing the NEW rules on my computer.

This time, I made it through 2 turns before I died.

The game looks decent: it evokes the theme of Umbrella Academy pretty well. See some pictures below.

The game is essentially cooperative War:  you just get cards and play them. You have almost no choices: you have to move left to right, you have to play a card, you can’t hold onto cards to try to beat a later foe.

Like WAR, you either beat the villain or not.  (IF you tie, there looks like a cool tiebreaker, but it’s too little too late at this point).  It has player elimination (always a red flag), and if all players die (by going to hit points), the game is over and the players lose.

This game feels horribly underdeveloped.  I’ll give an example: you use your Player Card moving up and down on a track to notate your hit points.  A fine mechanic I’ve seen in other games.

BUT, you are supposed to “rotate” your player card 45 degrees if you use your power … so now, the same card that’s notating your hit points is rotated … which line is it on? It’s not clear now! (See below) 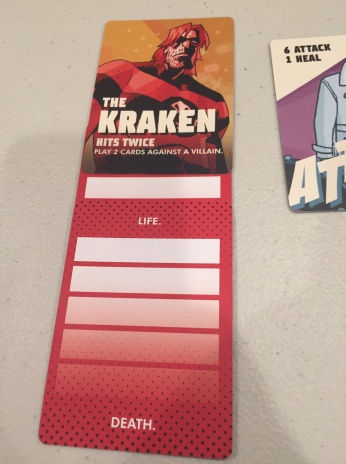 How did no one notice this (above) in playtesting?  This doesn’t work! It’s at best fiddly and at worst confusing!

So, the art (see above) brings the game up at puts it at 2 or 3/10.  It’s unplayable out of the box and almost unplayable with the updated rulesheet. It’s just a bad card game that aspires to be cooperative war (but fails). 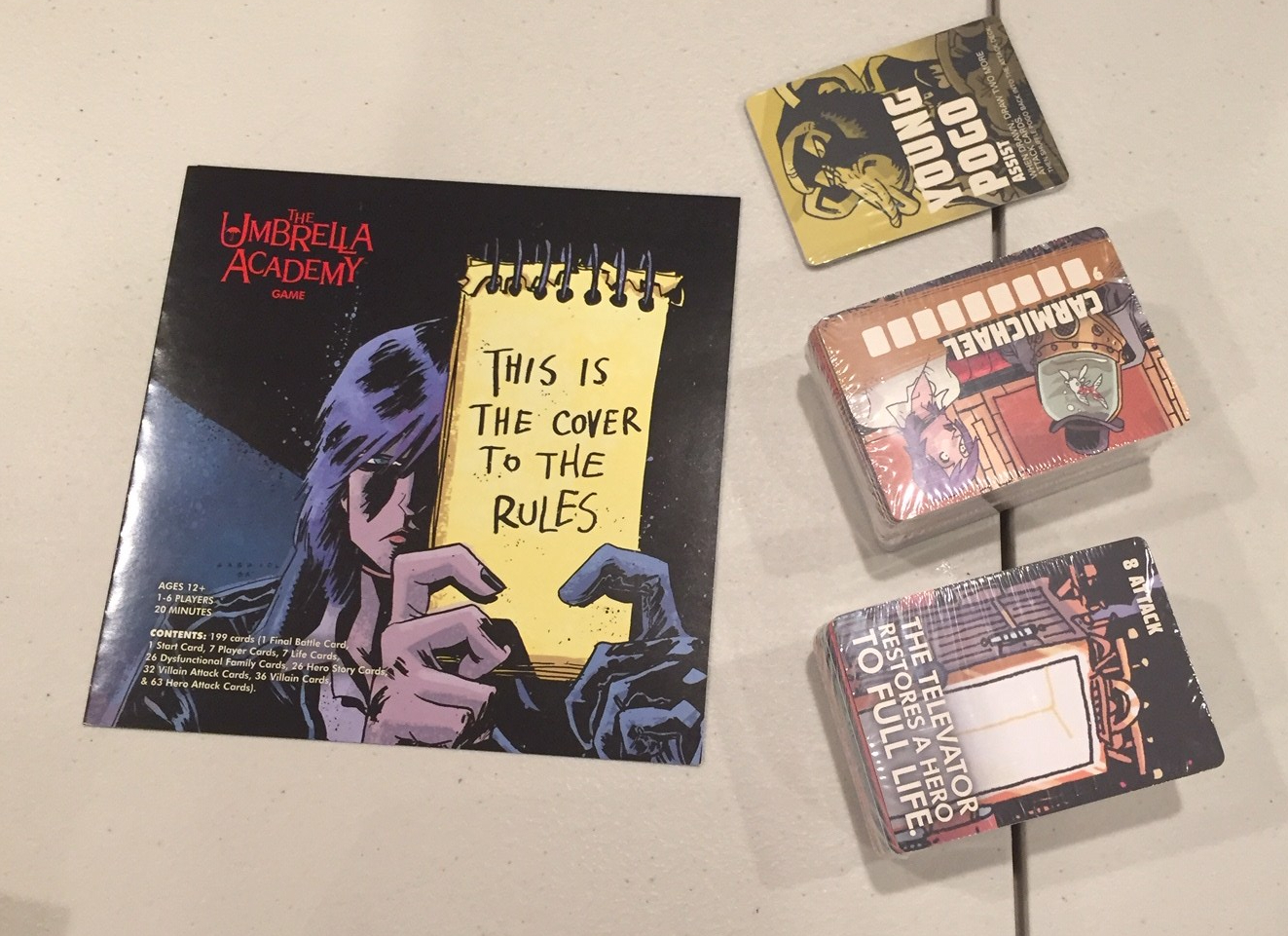 I was hoping The Umbrella Academy might be a nice light weight cooperative game for me and my friends.  If you looking for a lightweight cooperative game, I’d recommend either Heroes of Tenefyr (see here, although some of my friends didn’t like it) or No Nu Kuni (see here): both are lightweight.   Heroes of Tenefyr is kind of like cooperative war in the guise of a dungeon crawler, but it feels like things happen, you have some choices, and it’s very cute.  Ni No Kuni is like a entry level cooperative resource game where the theme might really bring you in.  Both of those games are playable and significantly more fun than Umbrella Academy.

2 thoughts on “A Review of The Umbrella Academy Card Game”