This is part II of the Thunderstone Quest: the Barricades Expansion review:  See Part I here.   Part I focuses much more on components and overall initial experience. 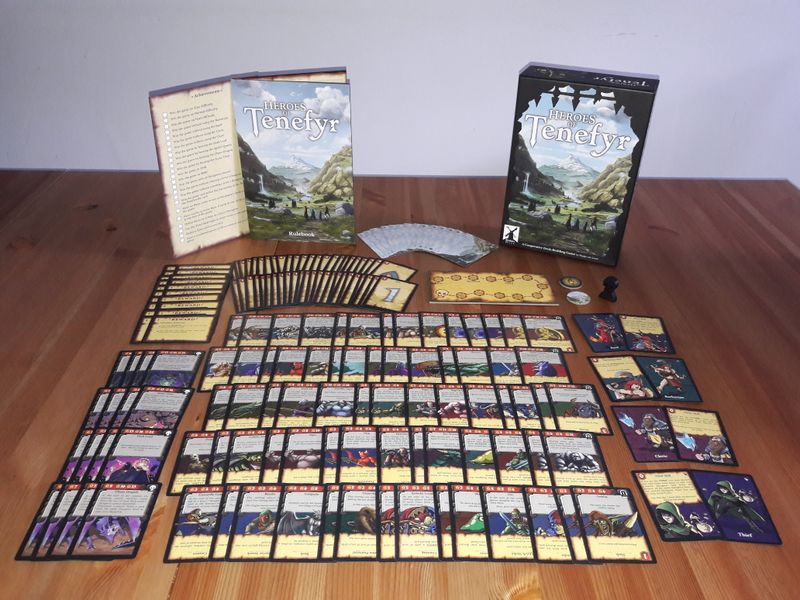 … and Thunderstone Quest: The Barricades Expansion.

Never have two games that were so similar been polar opposites!

Heroes of Tenefyr (HOT) took a few minutes to set-up.  Thunderstone Quest: The Barricades expansion (TQBE) took almost a half an hour.    And this is pretty typical.  I’ve played TQBE a number of times now and it takes a while to set it up.   You could argue that I am not familiar enough with the game to move it quicker, and you’d be right.

But, for a game that’s almost as big as Gloomhaven, it just takes a while to set-up.  You just have to accept it!

I was able to explain the rules to HOT pretty quickly and we got underway.

TQBE took a while to ease into the rules: I had to have the cooperative rulebook AND the main rulebook (remember: this is an EXPANSION so it has its own set of rules) out at the same time to push through the game.

It’s been like this for every playthrough TQBE!   Really, a player summary card would have gone a loooooong way towards making this easier ….

HOT doesn’t have too many rules.  You just start playing right away.

In TQBE, you keep forgetting rules and have to look stuff up:

We had to look up many rules for TQBE expansion, and we realized (even after a number of plays) that we are still learning things!

Here’s the thing: Heroes of Tenefyr wasn’t for us.  I played HOT solo to learn the game, and I never felt like I had any real choices.  Sure, I could cull a card from time to time, but you always cull your zeroes!  Not really a choice.   It felt like you just turned over cards and saw what happened.  I was hoping the group play would be better (and it was) but my gaming group hated this game.  They said the same thing I did, “It felt like I had no choices, I just turned cards over.”    I liked it better than that with more people, but it felt almost like cooperative war (the card game) … which could be fun with the right group.  Fun and brainless, nice art, but not really a lot of choices.  I liked it okay in the end, but my gaming group rated it very low: 5ish–one person gave it a 2!

I wanted to talk about Heroes of Tenefyr first so I could talk about Thunderstone Quest: The Barricades Expansion.    They really are polar opposites.

HOT is easy to set-up and explain, but has few choices when playing.  But it’s short, maybe under an hour.

TQBE is hard to set-up and explain, but you have SO MANY choices when playing!  And it’s long: maybe 2 hours?

In the end, my group loved TQBE because it has a lot of choices!  It’s just the nature of my game group: your mileage may vary.  We ended up giving TQBE probably a 7 or 8 overall, but we realized we had to “suffer” for our choices.   Set-up and tear-down were long, the rulebooks were a bit daunting (they were well written, but the cooperative mode was separate so it made it messy to go back and forth). At times, the game felt like “work” trying to juggle everything going on.  But it was fun!

In the end, the solo mode was good but 2-3 players was probably the sweet spot. 4 players works.  5 players may be a bit too much for this game…  I mean it works,  but there is so much going on, it becomes a little overwhelming.

Be aware: it’ll probably take 3 hours from start to finish to get through as game (because set-up and tear-down adds another hour over the 2 hour gameplay), but it was a fun game with a lot of choices.