Cast your mind back not so long ago  … My friends and I would play Arkham Horror: The Board Game (not the LCG) every chance we got. For years, it was our go-to game. We would spend all afternoon, or all evening, playing. Some of the wives didn’t get it, some did. We loved exploring Arkham, plotting how to close the gates, scheming to save our skins. Great fun. Arkham Horror: The Board Game.

For my Bachelor Party, we played an 8-Player Arkham Horror: The Board Game with every available expansion (I think there were 6 at the time). We had to assign one player per expansion to be responsible for the rules, because there were so many. Fun times.

But Arkham Horror: The Board Game got too big. Too many expansions!  (I think this is a common criticism). I actually had an extra copy of the game (for when I taught Software Engineering and had my students implement the game in Java). We had to break open a fresh copy to play it one Halloween. 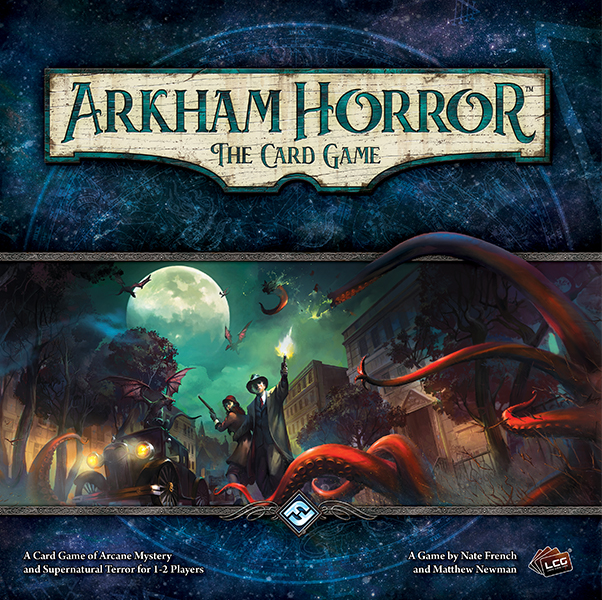 So, I will be stepping on a lot of toes here. On BoardGameGeek, AH:LCG is up for Game of the Year. A lot of people on Dice Tower say it’s their favorite game of 2106. I’m sorry, I don’t get it.

To be clear: I like Arkham Horror: The Board Game. I was *really* looking forward to the LCG. I anticipated liking it so much, I pre-ordered every expansion for the LCG on CoolStuffInc even before I played for the first time.

Then I played AH:LCG. Ergh. Then tried again. Agh. And tried again. Blah. And again. I canceled my order with CoolStuffInc for all the Arkham Horror: LCG expansions.  I don’t want to play it anymore.

There is some goodness about the game.

The art is amazing. Wow. I can’t fault this at all. It’s a beautiful, well-rendered game. It definitely evokes the Cthulu Mythos.

You can play it as a solo player. I will probably finish playing out the game as a solo player to “get my money’s worth”. A lot of other games have solo rules tacked on, but this game works very well as a solo game.

Really? I was reminded by an old D&Der that the very first box of the D&D game used chits instead of dice because, as the story goes, they ran out of dice in the production, so had to go with the chits. I think if my first D&D box had come with with chits, I may have bailed on D&D. There’s something very cool about the dice, especially to a newbie.

It’s not like this game was cheap. I paid $34 on CoolStuff … for about 200 cards. I regularly see AH:LCG on Amazon for $55 (and more!). It’s even more than that at my FLGS. It’s not like Fantasy Flight aren’t making plenty of money. Some dice would have gone a long way here, especially cool mood dice.

The counter-argument, of course, is that “then the designers can’t adjust the difficulty with dice! The scenarios all have different chit distributions!”  Ok, let’s talk about that …

This game is SOOOOO swingy. One bad pull, and the game is over. One card deals you damage for the difference between the expected and pulled value. If you pull a -4, you are dead. Gee, that was fun.

There are ways to mitigate it: build a better deck (that can cost money, see below), pre-allocate resources better (better playing: I am okay with that), get rid of the -4!

There’s a difference between being a hard game and a lucky game. I feel like there is too much luck involved to win AH:LCG. I want some strategy.

There is an interesting story here. Don’t get me wrong. But, once I have finished playing this, I just don’t think I’ll play it again.

Like I said, I got a “smoking deal” for the game for $34. But, for the price, I expected more components. More dice? More cards? Don’t get me wrong, the cards that came with it are fantastic. But, I don’t think I would have payed $50 for the game (which is what almost everyone else is charging) knowing what I got.

And this whole thing feels like a money grab:
“Hey, buy some new scenarios!”
“Hey, buy our playmat!”
“Buy another copy so you can play 3-4 players”
That really turns me off. And my friend Josh pointed out that building a great deck really requires two copies of the game. So, to make the game less swingy, I have to invest in 2 decks??? Or to play 3-4 players??

I don’t mind some set-up and tear-down time.

But, for Arkham Horror, we’d get a 2-4 hour game out of it. For AH:LCG, I might get an hour game. If I don’t die from something stupid.

Too much effort for a short game.

The rules are well-written. Especially the first-time through.

The rulebook and first time scenario rules reminded me of Mage Knight. (For the record, I really enjoy Mage Knight). Mage Knight!!! For those of you who have never played Mage Knight, it is a large, complex, intricate game with tons of cards/pieces, where you explore a large world. It has one of the most complicated rulebooks I have ever come across. The rulebook does it’s job, but it is a BIG rulebook. But I am okay with it, because Mage Knight is a BIG game.

AH:LCG is NOT a big game. It is small or maybe medium game. In my opinion, there are too many rules for such a small game.

Not As Fun As I Had Hoped

I wanted to like the game SOO MUCH! And it was kinda fun.

But after I beat the first scenario, (barely!), I died in the “post-game” because I made the wrong choice in a “Choose Your Own Adventure” choice. Really? Gee, that was fun.

Although the “Choose Your Own Adventure” books were cool when I was a kid, I never liked the randomness. It seems like you’d make the “right choice”, and it was always the “wrong choice” in the book.
And, ending an closely fought game with a stupid “Choose Your Own Adventure” ending, and then dying because of a random/bad choice, was just deflating.

There was some fun, some great art, and an interesting story, but all the other negatives drove the rating down.
Sorry. My BoardGameGeek rating was a 5.

EDIT: I was trying to figure why I like Time Stories, which also has limited replayability, but why I don’t like AH:LCG. I think it’s because Time Stories is less swingy, and there is a MECHANISM for backing up and restarting that’s part of the game! In AH:LCG, I just die.