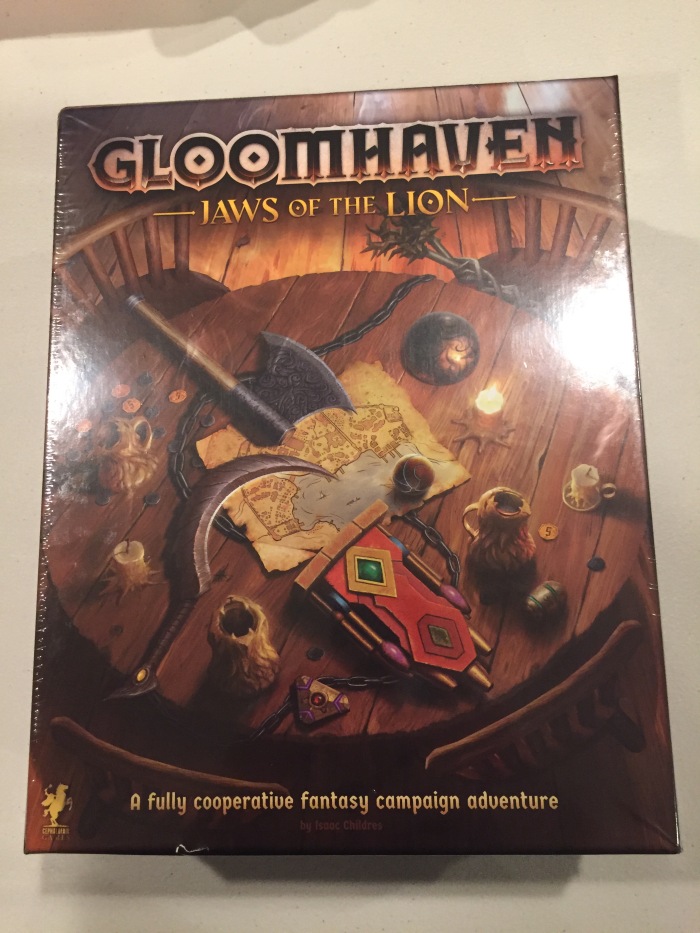 So, this morning, my YouTube feed was jammed with 3 major YouTubers discussing Gloomhaven: Jaws of the Lion.   Oh ya!  The end of the “media blackout” must be today!  (A lot of times, very popular games have a media blackout where they can’t discuss the game until some predetermined date).  The fact that Rahdo, Watch It Played, and the Dice Tower all talked about this today tells me “this is the day it’s released“. 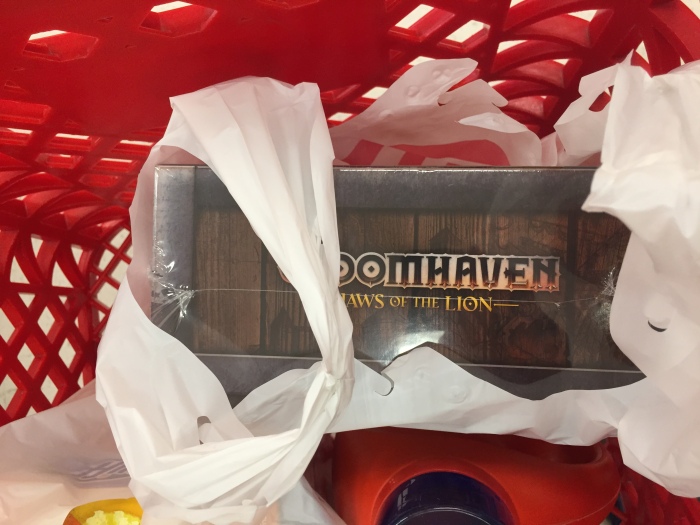 So, Gloomhaven: Jaws of the Lion is a Target exclusive for the first  month, then it will be available through other channels.   Today, June 21st, 2020 is the day it was released! Upon seeing the 3 major YouTubers talking about it, I checked and saw that my local Target had it in stock: namely 4 of them.  The store wasn’t open yet, but I convinced my wife to get there right at 8am when it opened.

Here’s the thing: there was a line at the store when we got there a 7:55!  About 8 deep!  Gulp!!!  Is everyone here the get  Jaws of the Lion?  It turns out, today some video game was released and MOST people were there for that.

Just like my Wonder Woman game, I had to ask an associate if the game was in the back (it was: the game wasn’t out on the floor).   Apparently,  two other people were right behind me.   So, at 8:05am, I had the first copy and copies two and three were already spoken for.  I’ll bet the last copy was gone by 9am.

What’s Gloomhaven and Why Is This a Big Deal? 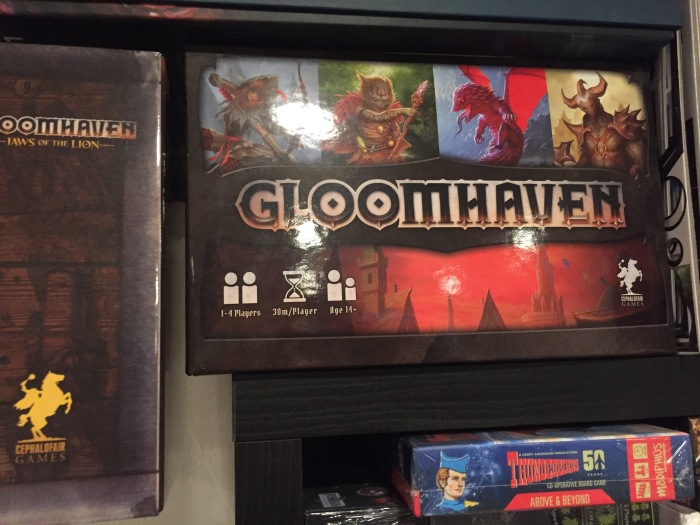 Gloomhaven is the Number 1 game in the world, according to BoardGameGeek. It’s a cooperative dungeon crawler (ala Dungeons and Dragons) with a ton of content and beautiful art/design.   But it is a very heavy game and a lot of people would be turned off by its heaviness. 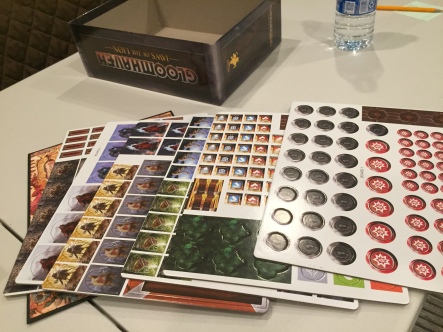 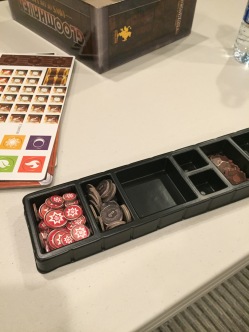 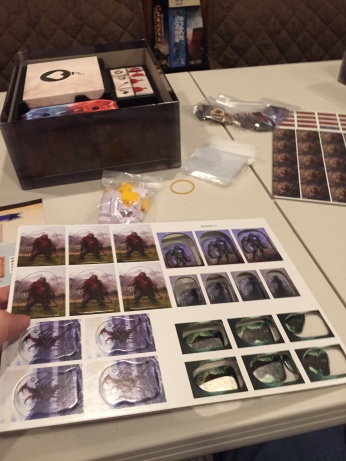 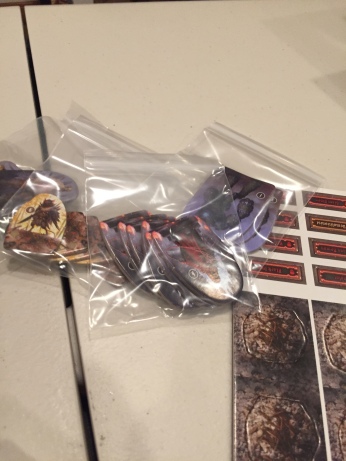 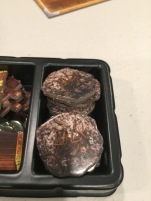 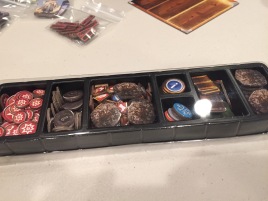 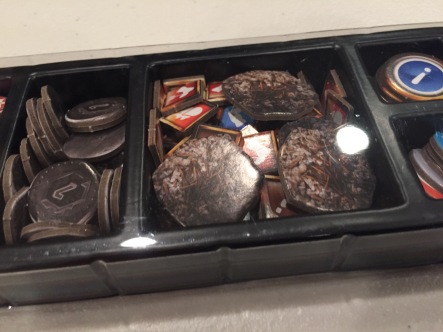 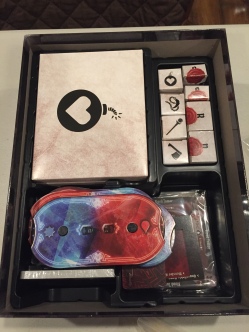 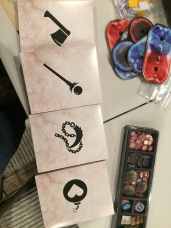 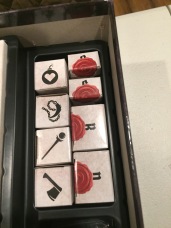 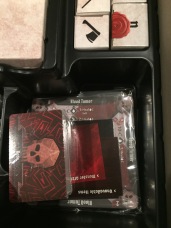 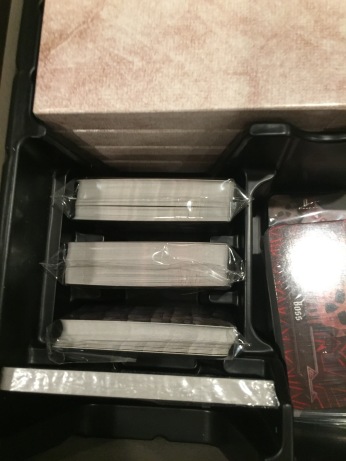 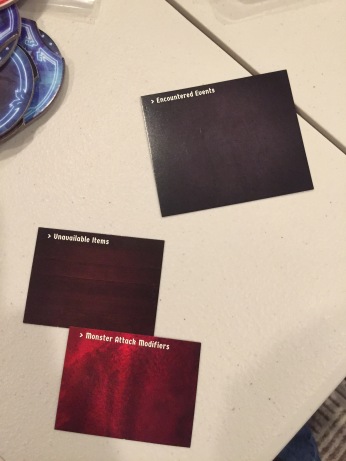 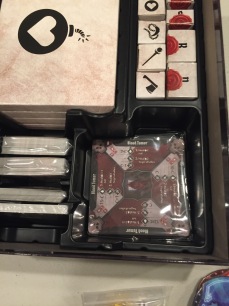 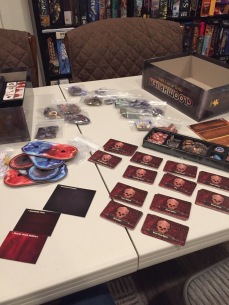 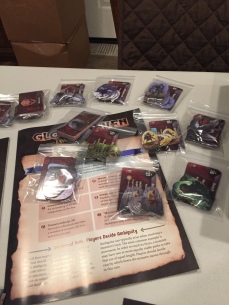 There’s a lot of stuff, but the rulebook takes you through it pretty well.  See all the pretty pictures above to get a sense of what’s in the box!

Here’s my review of Gloomhaven: Jaws of the Lion in one word: Gloomhavenito.

What do I mean by that? If you know Spanish, you know that adding the “ito” suffix to a word makes it diminutive and slightly cuter while still retaining all the characteristics of the base word.  Gloomhaven: Jaws of the Lion is still Gloomhaven, but smaller, cuter and a little simpler.  (My one word review took 50+ extra words to explain).  The box is smaller, the amount you get is smaller, the number if characters is fewer … everything’s smaller.  But it’s still a big box! (see below) 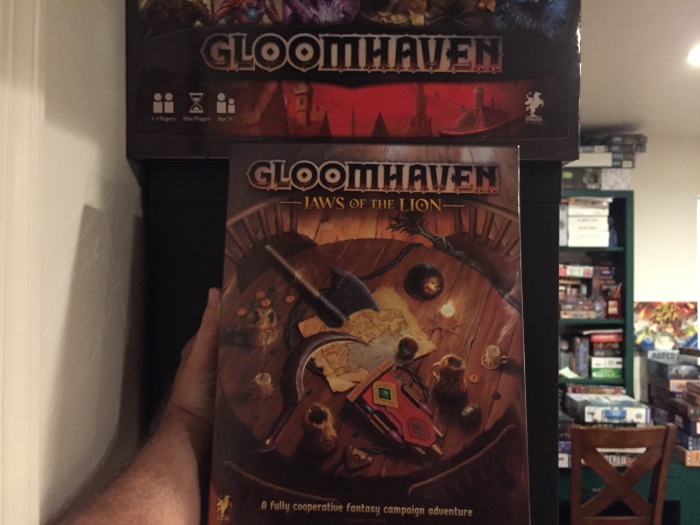 Here’s my review in three words: Gloomhaven with onboarding.

That’s probable more accurate as a review.  At it’s core, JOTL is still Gloomhaven.  All the mechanisms are still there, all the great combat is still there.  What the JOTL rulebook does is walk you step-by-step through the game, slowing expanding a very simple base game.

The first page give you a ‘sense’ what’s in the game.  Then there’s a rulebook for your first play. 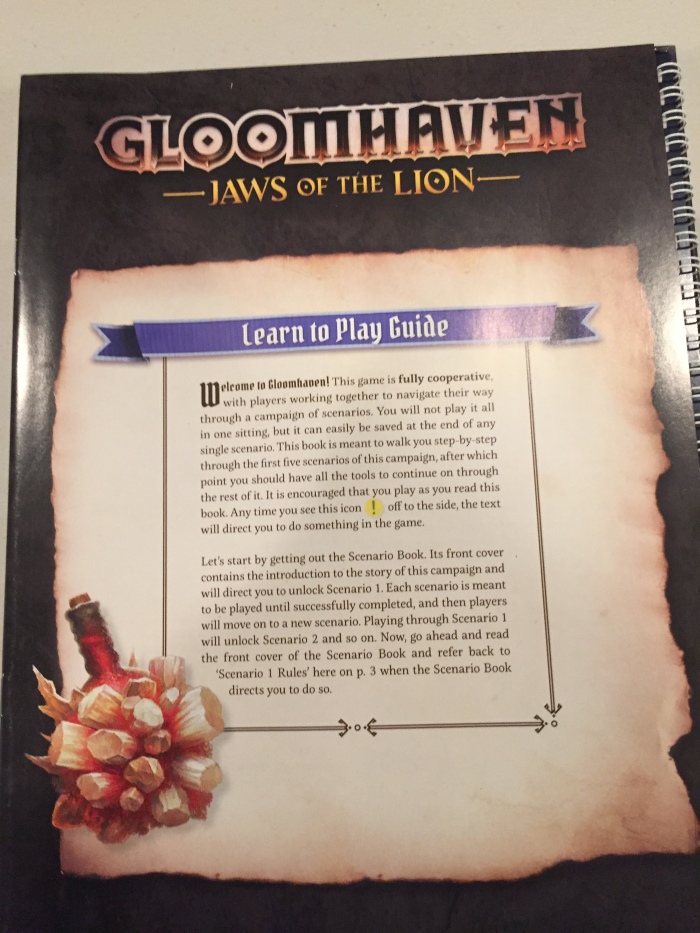 By the end of the first 4  games, you have the majority of the rules of a standard Gloomhaven experience.

And it works, really well.  I wish this had been my first Gloomhaven experience!  But, like a dummy, I had to learn the original game the hard way by reading the original huge rulebook.  (It was 52 pages!)

Arguably the best part of JOTL: no hunting for cardboard!  The original Gloomhaven was a bear to set-up: you had to go hunting through reams of cardboard looking for all the scenario sheets you needed.  It was cool and thematic, but set-up and tear-down took forever.  JOTL fixed this by eliminating most of the cardboard hexes and introducing us to the storybook!  All the scenarios are in a storybook!  See above for first set-up! 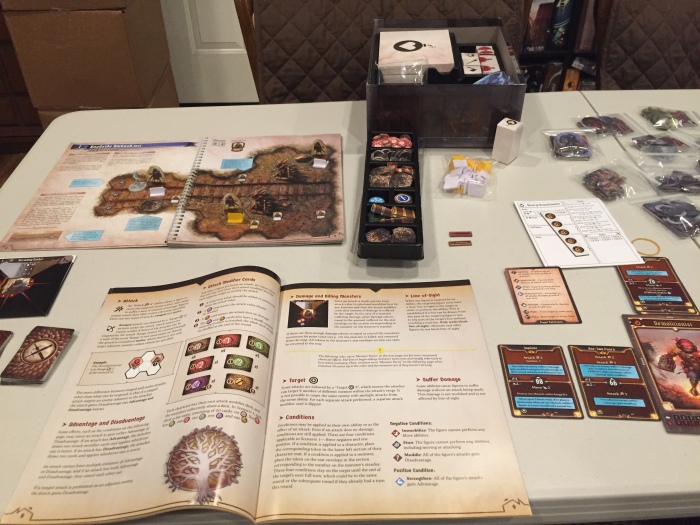 This one innovation above makes the game much more playable.  You don’t sigh inwardly (dreading the set-up) when people want to play.  Set-up for a scenario is “open a book!”  Tear-down is “close a book”!

My least favorite rule in Gloomhaven was that you had to spend an action to pick up Loot during combat.  And the same for a treasure chest.  This makes NO thematic sense most pf the time! ” I just killed the last monster and I can’t pick up the Treasure chest that’s right next to him???!!”    It’s SO unlike my games of Dungeons and Dragons (the prototypical dungeon crawler) or ANY dungeon crawler.  The worst part?  THIS RULE IS NOT FUN.

Here’s the thing: we ignore the Loot rules completely.  We have our own set of house rules for Loot and Treasure! Spoiler Alert!  We allow ourselves to pick up the treasure at the end of the combat, … usually.  If it DOESN’T MAKE SENSE to get Treasure, we won’t.    For example:

It would have made sense if each scenario specified the rule.  Ah well.

Unfortunately, the Loot rules survived to JOTL.  I suggest you house rule some Loot rules for your group that make the game more fun.  Everyone I know who plays this has “some version” of house rules to fix the Loot rules. Caveat Emptor.

Here’s the thing: I think this is a missed opportunity.  If JOTL is trying to onboard us to a simpler experience, a solo game playing two characters really ratchets up the complexity.   I think the first time for a lot of people will be as a solo game, and I wonder if the onboarding experience could have been made even a little easier with allowing true solo rules: 1 player plays 1 character.

Here’s the thing: I played out the first two scenarios with exactly one character. I “eyeballed” the complexity rating and scaled it back for one charactter. (I have played quite a number of base Gloomhaven games, so I have some sense of this).  I did this because I wanted to keep the complexity down.  Basically, I reduced the number of monsters by a few.  And you know what?  It still worked.  In both games, I just barely won.

I’m sure Isaac Childres (the designer) is rolling over in his Gloomhaven grave (he’s not dead, I just probably shocked him) that I am playing like this.  Here’s the thing: I would pay for single player rules.  But that’s just me.

To be clear, the solo player rules (with two characters) are great!  I just think an onboarding experience could have been improved for one character. 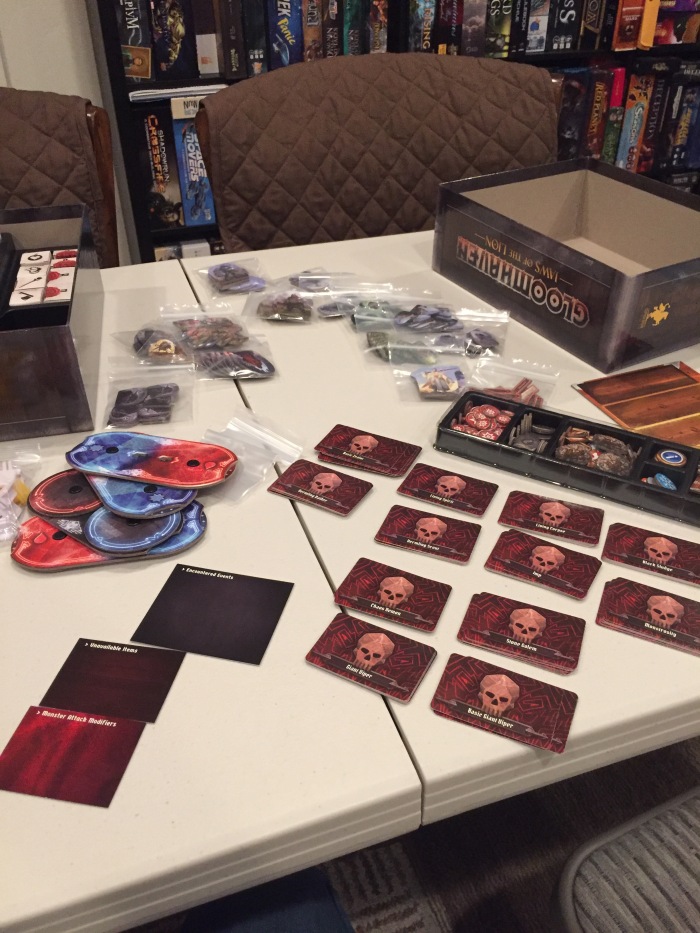 There’s a lot of goodness here.

I have a confession to make: I was one of the few people on earth who didn’t get Frosthaven when it came out.  (If you don’t know what Frosthaven was: it was the successor to Gloomhaven and the biggest board game on Kickstarter ever as of this writing)  Why?  Because Gloomhaven still sits on my shelf, mostly unplayed.   I love the game, but it just doesn’t get to the table.  It’s too daunting.  So, I doubt I’d ever get Frosthaven to the table … so I didn’t get it.

Here’s the thing: I feel like I have a chance to finish Gloomhaven: Jaws of the Lion.  It’s just small enough that I feel like I could get through it, maybe even solo.  And, even more so, the game set-up and tear-down doesn’t scare me like it does with Gloomhaven (because of the storybook).  The storybook is the real reason to get JOTL over Gloomhaven.

If you didn’t like the original Gloomhaven, well, this probably won’t change your mind … unless it was because the rules were daunting!  In that case, you might want to give Gloomhaven: Jaws of the Lion a try.  It’s a very good onboarding system.

5 thoughts on “Gloomhaven: Jaws of the Lion. An Unboxing, Solo Rules, and First Impressions”