I know the real reason you are reading this: you want to see what the box top looks like when you sit on it.  Well, without further ado, here it is! 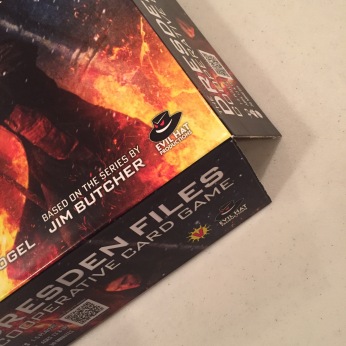 You might be wondering how that happened … Basically, before RICHIE CON 2017 really got going, I brought out Dresden Files: Cooperative Card game to teach my friends.  Um, while placing the game out, I put the box top on my chair.  And then I sat on it.  *Cough*

And that’s the hair-raising story of how I sat on the box.  The good news is that the great people at Evil Hat games replaced it!  I had backed the Kickstarter at a high level, and they were nice enough to send me a new box.  They were really friendly about it.  And YES I TOLD THEM THE TRUTH—The Red Court showed up and squished it.  No seriously!

I confessed how dumb I felt that I sat on my box.  The game was perfectly fine when they shipped it to me, it arrived in perfect shape. They didn’t do anything wrong, and it was all my fault.   And they were kind enough to replace it.  Thank you! 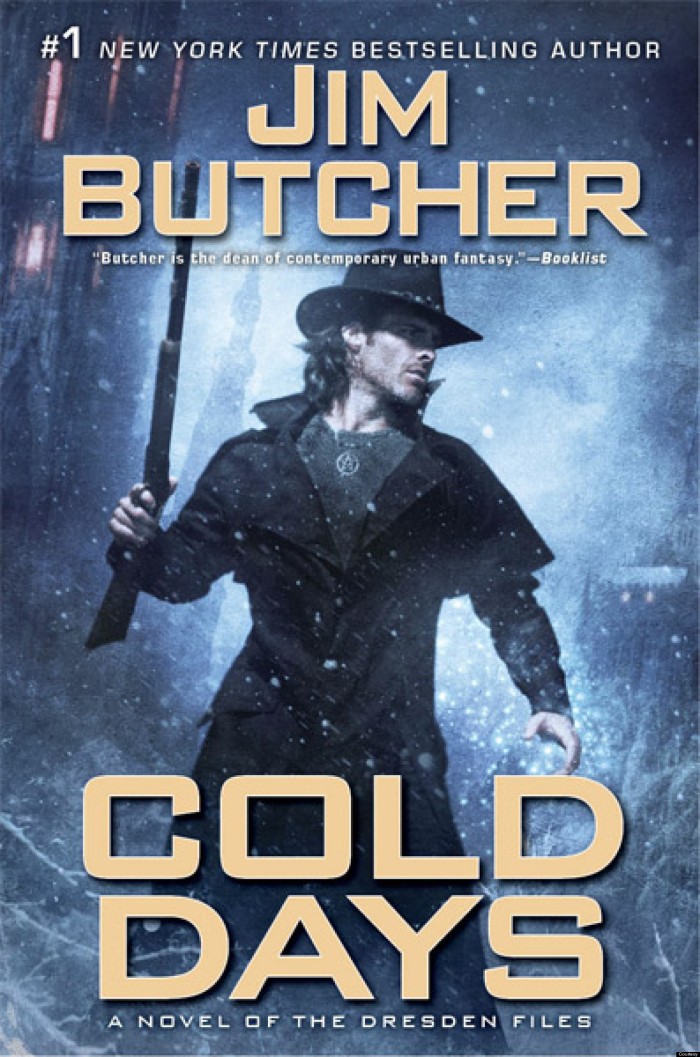 Recently, I “relistened” to Cold Days.  Wow.  This is really a great book.  I came home from a looong car trip, and I was on the edge of my seat the whole time!  When I got home, I really wanted to play this book, so I pulled out the Dresden Files: Cooperative Card Game.  Unfortunately, the expansions only go up to Turn Coat.  D’oh!  Anyways, I pulled out Storm Front and played it as a solo game.

I do hope they do the rest of the books.  The good news is that the box (the unsquished version) has plenty of room for the expansions if/when they come out.

This is a good solo game.   If I want a quick, solo game, this game seems to fit in nicely.  The box says it takes 30 minutes to play, and  it really does take about 30 minutes to play solo! And it has quick set-up and tear-down.   With all the different books, (the first 10 books form the 10 scenarios, plus some random scenarios), there is quite a bit of content here.

So, I like the game as a solo game quite a bit. After playing a number of times, I did make a few changes:

So, during group play, one of the rules is that players are NOT allowed to say “exactly” what’s on a card in their hard.  The  hands are closed, so no info is shared.  Info can only be shared by saying something vague like “I have some GREAT Clues, but they cost a lot!”, but you can’t say “I have 5 CLUE card that costs 5 FATE”! Basically, this is the same rule as from Shadows Over Camelot … no table talk.  And my friends HATED that!

We immediately turned the hands over so all information was shared.   We could prod each other and look at each others hands: we had a LOT more fun when we made all the information shared and available.   This was immediately a house rule for us.  (We had all played Shadows Over Camelot and HATED that rule there too). 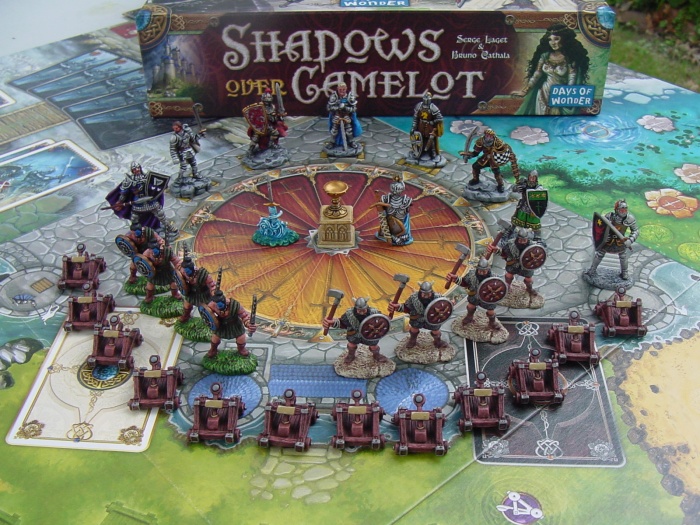 So, my friends liked it … ish.  None of them had read the Dresden Files, so they didn’t have any of the history or the backstory of the characters.  They were just playing what they were given.   So they didn’t bring any expectation to the table.

Sigh, well, they gave it about a 5 (6 if they were being generous) after we played.  Their main complaint was that it didn’t feel like there was a lot to do.   There needed to be more randomness: they liked it when they had to roll for FATE points, but it was a little too cut and dried.  (I am paraphrasing here).    Of course, the hated the randomness of the Showdown (where you just roll some dice at the end to see if you win).  Of course, you see the contradiction there: there want more randomness, but they were complaining that the endgame is too random.   Sigh.

I personally like this game: I give it about a 7 out of 10 (using the BoardGameGeek rating system).   When I want a lightweight solo game, I think this is a good choice … if you like puzzly games.  It’s only 30 minutes for a game!  I think the theme does a lot for me: I really like the characters.  I wish the game were a little more of an adventure.  My friend Josh and I were talking about “What would Cold Days look like an expansion?”  It’s such a HUUUGE book, it feels like it should be split into two or three scenarios which build on each other.  That could really engage some people more: if you felt like your choices mattered for the next adventure, as long as there was more than one way to win!

One thought on “Review of the The Dresden Files: Cooperative Card Game — Part II. Conclusions or “What Does it Look Like When You Accidentally Sit On The Box?””