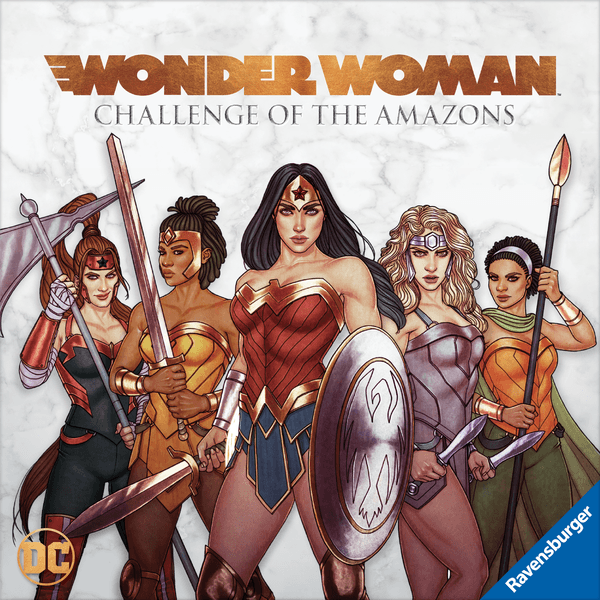 I had seen that Wonder Woman: Challenge of the Amazons was available from Amazon for March 2nd.  I went ahead and pre-ordered it, expecting it to arrive this week.  For “some reason” (probably money), it was delayed and Amazon asked me if I wanted to still get it … one month later.  Nope.

I went to Target: I saw that it was available on their website …was it in the store?  Ah rats. I didn’t see it.  Was it up front because it was new?  I looked around and didn’t find it.  I was about to give up when an employee asked me:

“Do you have the new Wonder Woman board game?”  (Employee searches on his phone).

Viola!  He brought it to me … and I went home and immediately played it.

The box is nice, although something about the box art strikes me as  … off.  I like the art, but the proportions of the ladies (?) seem off a little bit?  Honestly, it’s very minor.

The game looks good when you open it up:

Rulebook is quite good

The board itself has almost a “piece of art” on the back.  That’s pretty cool.  I would have perhaps enjoyed a different map for gameplay, but the art was pretty cool.

The cards aren’t linen-finished and they seem a bit rough, but I really like the art on them.   They are easy to read and easy to understand.

The board looks great.

There are minis!! The minis are much nicer than I expected!  They look really nice!

The bad guys just get standees from the punchboard (hah hah).

The resource cubes remind me of the cubes in Lords of Waterdeep: the cubes in Lords of Waterdeep are supposed to be Clerics, Fighters, etc.  I always thought that was a very weak corrrelation and kind of cheap.  I have the same problem here: the orange cubes are “Ares troops”, the purple cubes are “corrupted Amazons” and the white cubes are “Warriors”.  Really?   I feel like those are poor choices.  Shouldn’t black cubes be Ares troops?  (All the bad guys cards are black!)  And maybe blood red cubes or grey cubes should  be corrupted Amazons.  It’s fine, it just seemed … athematic/cheap. EDIT: maybe it’s for color-blind people ?  If so, I withdraw my objection to the colors chosen.

Gah!  No solo game! (Hello?  Saunders’ Law?) The box says “2-5 Players”.  So, I did a standard “trick” for solo play: I played two characters.  This worked pretty well, but there is some subtlety here.  In the game, you aren’t allowed to talk once you’ve seen your face down cards.  You have two cards up you can all see, but everyone also has 3 face down cards.  I think, thematically, you are strategizing, then once you get into the field, you can no longer communicate as much.

For solo play, this can still work:

I was able to get through a full solo game with these rules.  Honestly, it worked pretty well.   (It felt “sorta” like the solo rules for The Shipwreck Arcana: you have to “forget” what you did as one role when you do the next.)

The rulebook is, in general, fantastic.  It’s easy to read and follow along with.

The first pages show all the components.

The next pages show how to set-up the game.

The rulebook teaches the main rules, then shows exceptions.

This rulebook made it very easy to get going very quickly.  This is one of the better rulebooks I’ve read in a while!  My only complaint, I think, is there was no section for FAQs or typical questions; I had a few questions when playing that I am sure others have had too …

“Can I pick up a Relic if I land there?  Do I have to wait to the end of all actions or just one action?  It says at the end of the action, which implies I can pick it up immediately, but I don’t know”

The game flowed pretty quickly: Ares acts and moves, then “does something bad” (adds more troops, the corrupted Amazons move towards the palace, something like that …).

The good guys (pardon me, good gals) then do good stuff.  Generally, each player gets 3 actions, chosen from one of 4 emblems (symbols) on a card that they have chosen to play.

The good stuff the characters can do: FIGHT, SUMMON WARRIORS, WISDOM, MOVE.

Once all the Good Gals have gone, your Defense goes down for every Ares’ troop on the board or corrupted Amazon in the Palace (by 2).  If you reach 0 defense, you lose!  If you take Ares down to 0 Hit Points you win!

The first game was easy to set-up and get going.

I played conservatively, and I think it took about 2 hours.  Which is surprising, because the box says 45-60 minutes!   I went through the Hero deck about 2.5 times, and I just barely beat Ares when his last card came out.  Turns out, I didn’t need to beat him then: I could reshuffle his deck and the game keeps going …  I probably could have played another 15 minutes, but I went for the final shot at Ares!

I had fun, but it felt a little repetitive after a while.  I think it’s because my play style was to always eliminate all threats (Ares’ troops, corrupted Amazons) when possible and do damage to Ares if I could.  Basically, I kept the Bad Guys under tight control, and they were never much of a threat.

I never used the SUMMON WARRIOR action.  Ever.  There’s only a few places on the board where you CAN summon warriors, so first it’s hard to do.  And frankly, warriors seem like a liability.  Why?  Because so many of Ares’ actions are “Corrupt Amazon warriors” (turning them into corrupted Amazons).  So, I spend the resources to summon them, only to have to have turn into something I have to deal with?  No thanks.  It never made sense in my game.   I don’t know if other games will go like this, but I am very concerned that this will be an issue.

So, I like this game.  I had fun.  Some components, like the mins and the board are great, the cards are decent (the art is good, but the card quality is just okay), and the cubes are probably the weakest components.  I am concerned that the game might be repetitive, and that the SUMMON WARRIORS doesn’t ever get used.  Luckily, there’s still 2 more Big Bad Villains to fight (Circe and Cheetah), so the game may take on a whole different dimension.

I plan to play some more solo games and some more multi-player games.  Stay Tuned.

7 thoughts on “Review of Wonder Woman: Challenge of the Amazons. Part I: Unboxing and First Impressions and some Solo Rules”