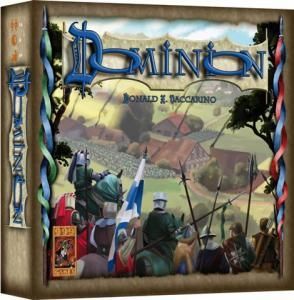 A surprising number of cooperative deckbuilders have a very similar theme: “Protect something that has XX hit points”.  As we go through our favorite games, we will point out when we have this theme.  We will also point out if the game have a viable solo mode (Saunders’ Law) and what makes the game unique and interesting. 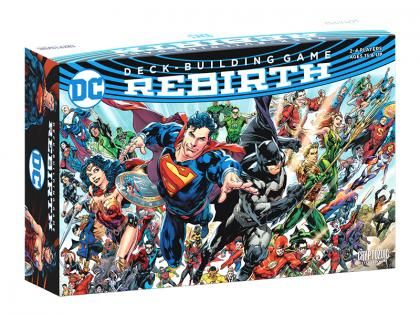 This entry is shared by Rebirth (a brand new implementation of the DC Deckbuilding game) with the original DC Deckbuilding game (with the the Crisis expansion).   The original DC game was a very simple deckbuilder that was very easy (some say too easy) to play.  The Crisis expansion (see below) added some rules to make the game cooperative, but it was a little clunky.  (You built some crisis decks and had to get through them).

The Rebirth reboot (what? Comic books rebooting?  That never happens!) kept the same simple mechanics of the DC Deckbuilding game and added some movement and some interesting choices about attacking and buying and moving. 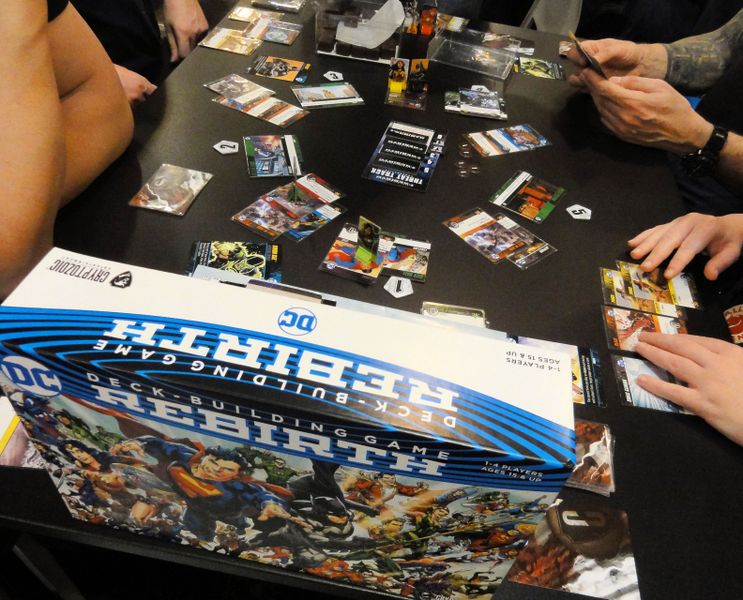 Players work together and move around the city (see the circular city above) and you can only buy cards for your deck from your current location.  It added some new ideas and rejuvenated the DC Deckbuilding game. 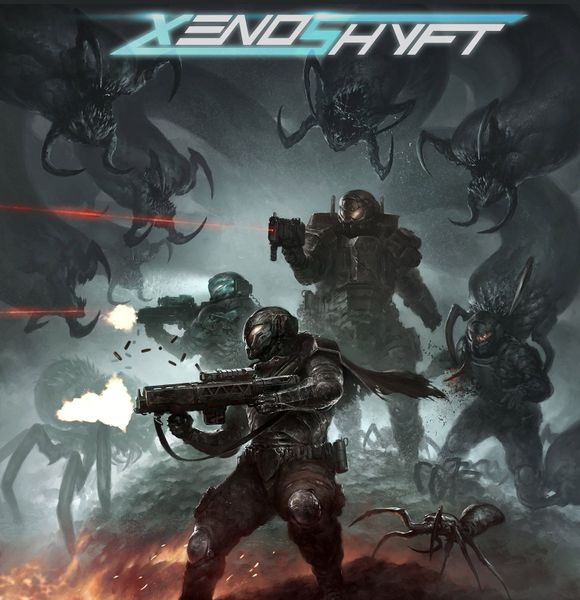 This game would probably be higher if it wasn’t so hard.  It’s a bit lucky, and you absolutely have to cull your deck hard to make any progress.  Even if you play just perfectly, there is a very good chance you will lose. 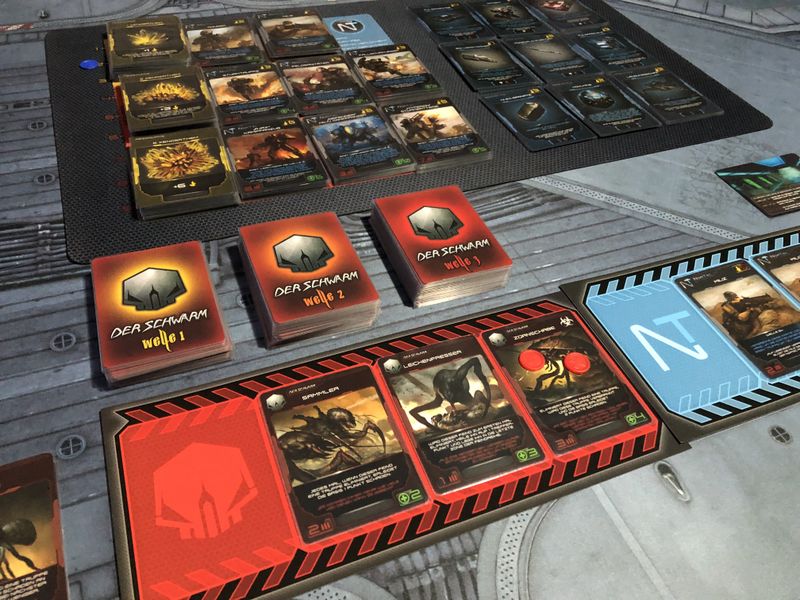 I didn’t like this game at first, but then I realized I was playing wrong!  Each player has a battlefield (see above: the red area is where the bugs come in and the blue area is where the marines comes) and the main rule I missed was that marines STAY ON the battlefield, even after your turn is over.  So, there is some troops that stay between turns.   Probably the best part of the game is that you can play play cards to your compatriots area!!  Is your buddy getting overrun with bugs?   Help him out!  This game really encourage communication and fosters cooperation. 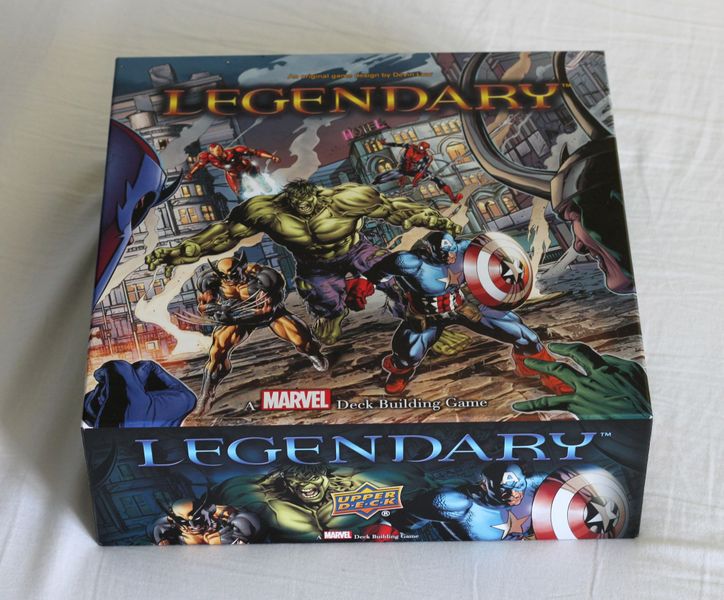 We must be careful here because STRICTLY SPEAKING, this is not a cooperative game: it’s a semi-coop (as all players can lose if they don’t work together a little) and whosoever has the most points at the end of the game, wins.  I know of no one who plays like this.  Every time I have played this game, we simply ignore the points. 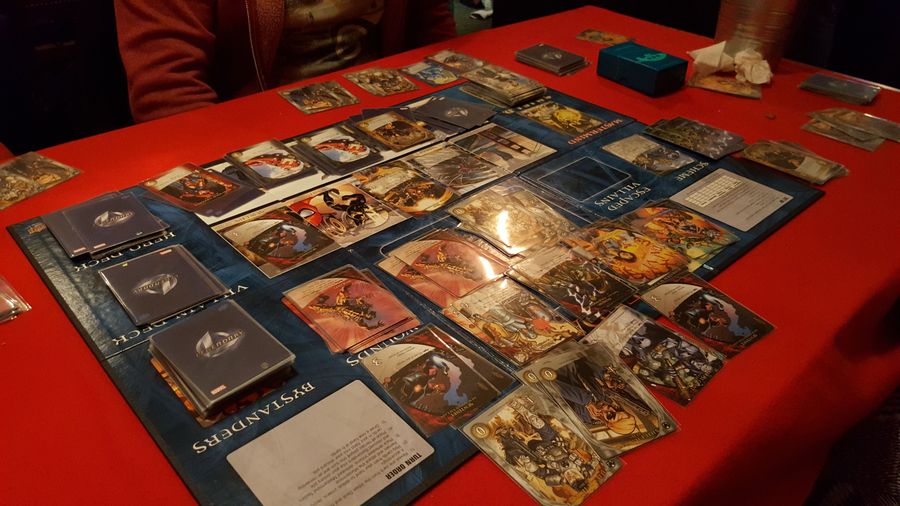 This gaming system has a lot of versions to it: Aliens, Predator, Firefly, 007, X-files, to name a few.  If the Superhero theme doesn’t speak to you, probably one of those themes will.  For me, I do love the Superhero theme, which is why this is on my list.

I will say that this isn’t higher because the theme is a little lost in the deck building mechanism.  I want to BE a superhero, but in this game, I am really just “buying a team of superheroes” as a I build a deck of Superheroes.  Super fun, but not super thematic. 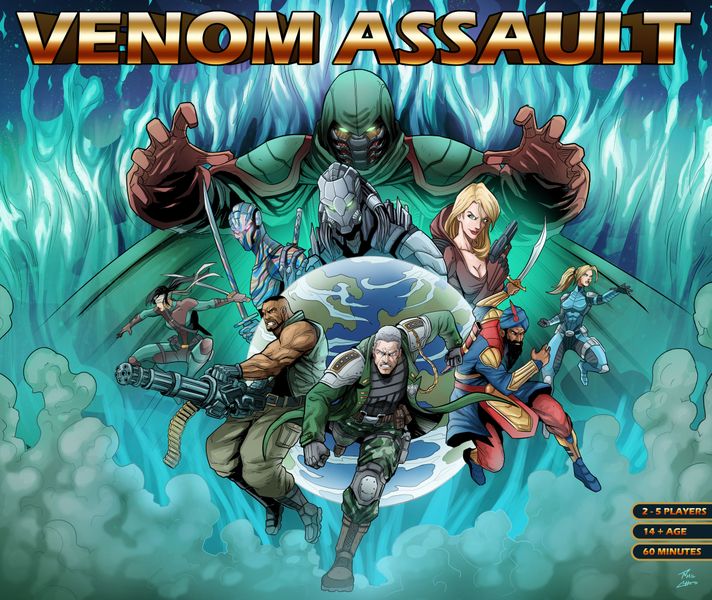 This game feels a lot like Legendary, but it seems to embrace the GI Joe theme pretty well and seems to integrate the theme into the game pretty well. 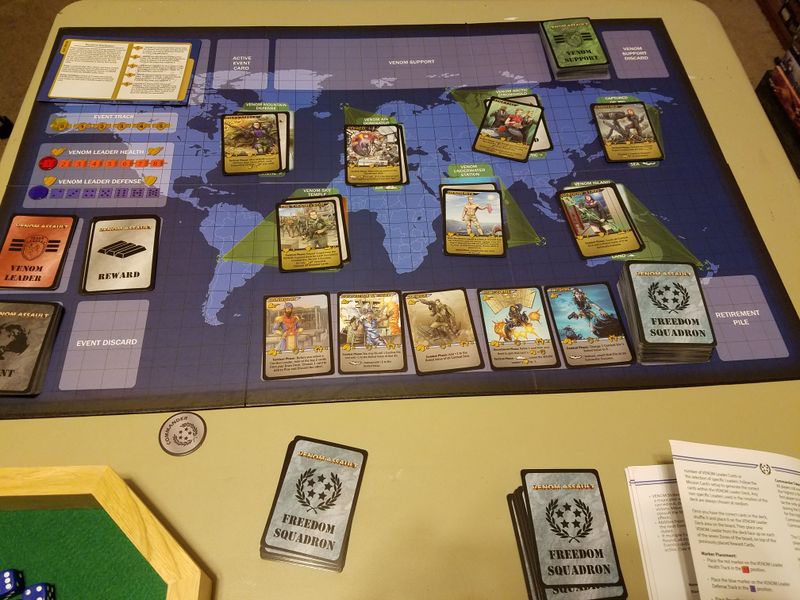 I picked this game up because I loved the art (by Phil Cho) but I was surprised how good the game actually was!  I feel this is an overlooked gem.  Luckily, an expansion is coming soon to give us more content. 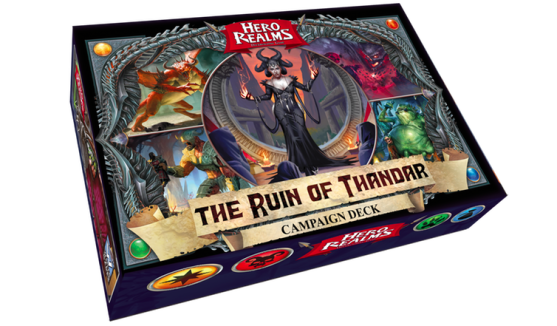 This one surprised me!  I play the Star Realms app on my iPad all the time and really fell in love with the simplicity of the Star Realms deckbuilding.   Hero Realms is just Star Realms rethemed into a fantasy universe, but it also adds character specific abilities!

To be clear: this is an expansion for Hero Realms.  You need (a) the original Hero Realms box and (b) some character packs (there are 5 total: Cleric, Ranger, Wizard, Fighter, and Thief).  Once you have these, this expansion adds cooperative rules and a campaign!

This is fun, moves quickly (especially of you know Hero Realms or Star Realms already), and tells a nice story.  I was surprised how much this expansion captivated me.  The only real problems were (a) how small the text in the rulebook/adventure books are (b) the lack of replayability.  Once you have played through the scenario, you can replay it a different path (there is some branching in the game), but there’s not too much branching total.  I like it, I’ll play it all through again, and I look forward to the next expansion: the Village of Thandar.

5. The Big Book of Madness 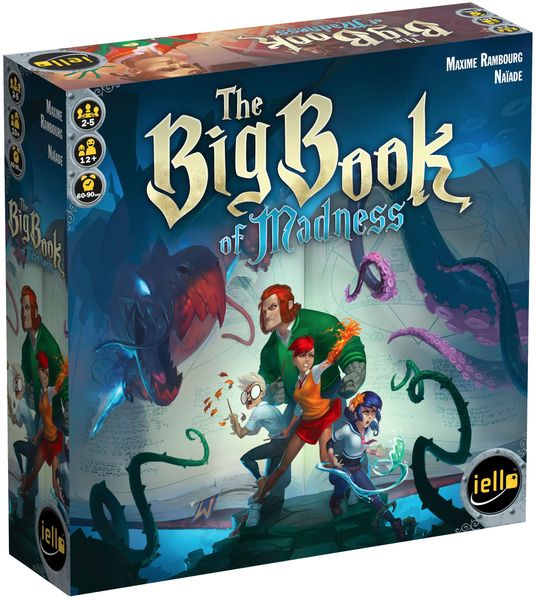 This game surprised me on how popular it was in my gaming circles.  Many of my friends have bought the game after playing my copy!  The game, in the wake of so many games, still comes out fairly regularly with my friends.  I think the Harry Potter theme (I know, not REALLY Harry Potter, but, c’mon) and the little touches really sell the game.

It’s been quite some time, but this is getting an expansion (The Vth Element) in 2020. 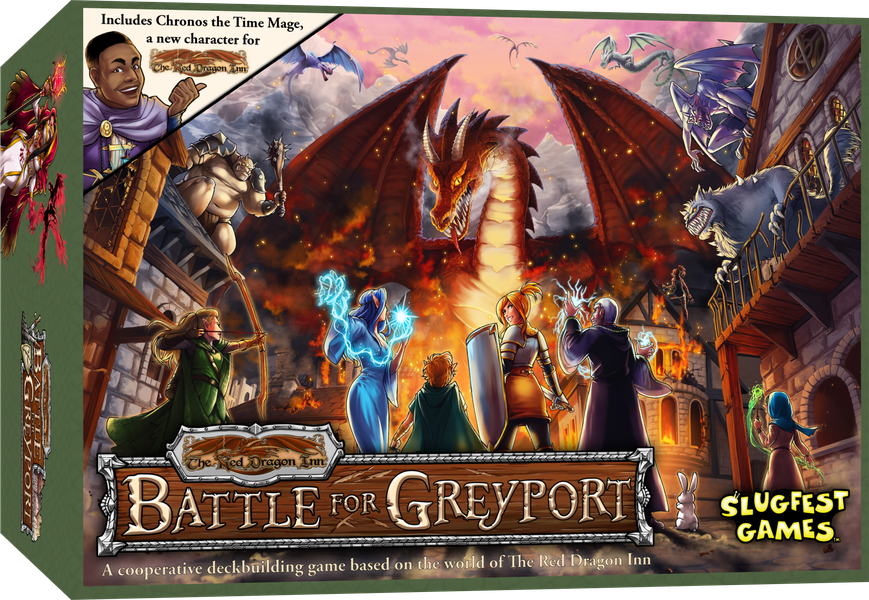 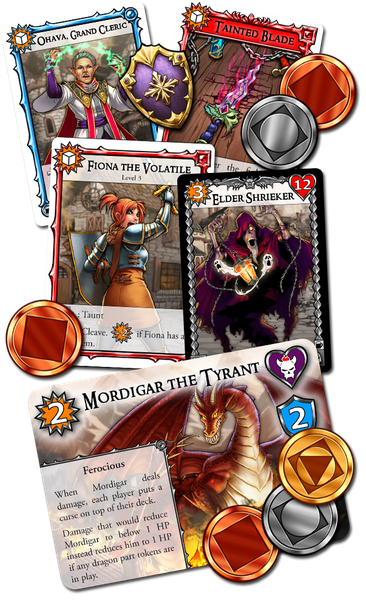 This game might seem like “it’s like everything else” now, but it was the first game I knew of where you had to protect the city (well, sorta … see later)!  I love the art, there is a ton of content and scenarios, and it has some really original ideas: For example: you can only play items (cards in your deck) on a character, but you can ALWAYS use your character (as well as other characters in your deck)!

This is one that has fallen under the radar, but I love this game!  I just wish it had a better solo mode.

To be clear, the base game is Thunderstone Quest AND YOU NEED THE Barricades Expansion to make it cooperative (and solo).  This is a big game with lots of rules (especially for the cooperative mode).  Take a look at my review here, here, and here.

This is definitely a deckbuilder, it’s definitely complicated, it’s definitely beautiful (and has amazing production values), but it’s definitely fun.   Players go back and forth to the town (to refresh) and the dungeon (to level-up and fight monsters).   At the end of the day, this is a race against time: every turn, monsters are swarming the city and ruining parts of it.  At some point they will overwhelm the town unless you take out the Big Bad at the bottom of the dungeon.

Even though it’s main mechanism is deck-building, there’s a lot to it: the game feels very thematic. 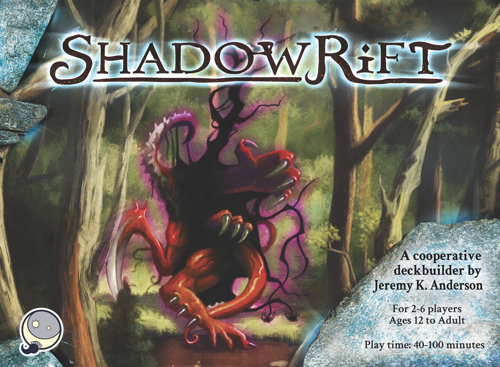 This game has had surprising legs in my game groups.  It still comes out pretty frequently, even though it is probably the oldest game on this list.  It is the first cooperative deckbuilder that I know of!    It’s kind of a unique game:  it doesn’t really feel like any of the other deckbuilders on this list.

One of my LEAST favorite elements of Dominion was the shuffling. Oy!  You’d watch and wait as the people next to you shuffled to get through the deck, then you’d have to shuffle your deck. …. Wouldn’t it be great if a game didn’t make you shuffle?  And that’s where Aeon’s End shines:  you do not shuffle your deck!

Depending on the mood you are in, there are really 4 different flavors of Aeon’s End.   They are all just variants on the base idea:  This is a cooperative deckbuilder where each player takes the role of a Mage who can cast spells out of breaches.   All players work together to take out the Bad Guy. There is no shuffling of cards, so you can exert control on the order that cards.

This is the original game and the simplest.  It’s a standalone game with a few scenarios and Bad Guys, but each game is standalone and doesn’t relate to previous games.

This is standalone expansion (i.e., you can play the game with just this box). It really just adds more content, but it has a different feel with different characters. 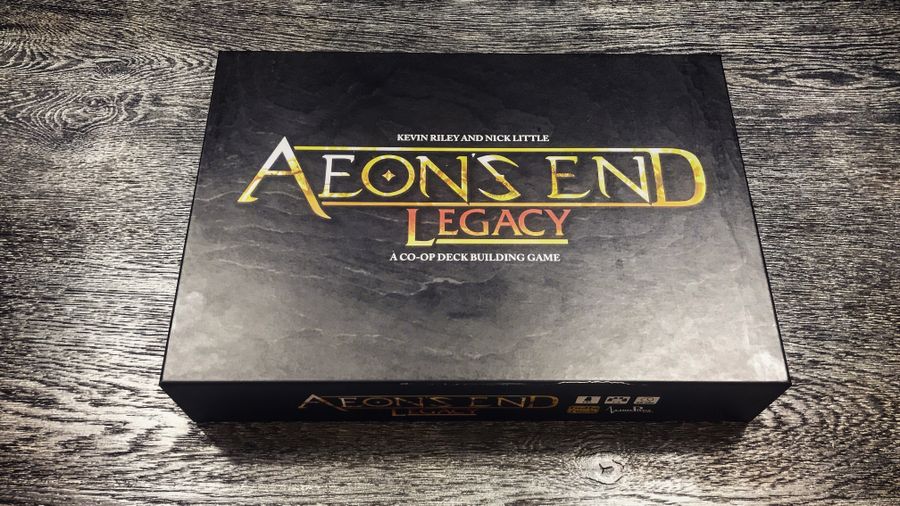 This is a legacy game where you add stickers, add new rules, and uncover a story.  If you and a group of friends are in the mood for an ongoing adventure where things really change, give this a try!   The game can be replayed, but only if you buy the recharge pack. 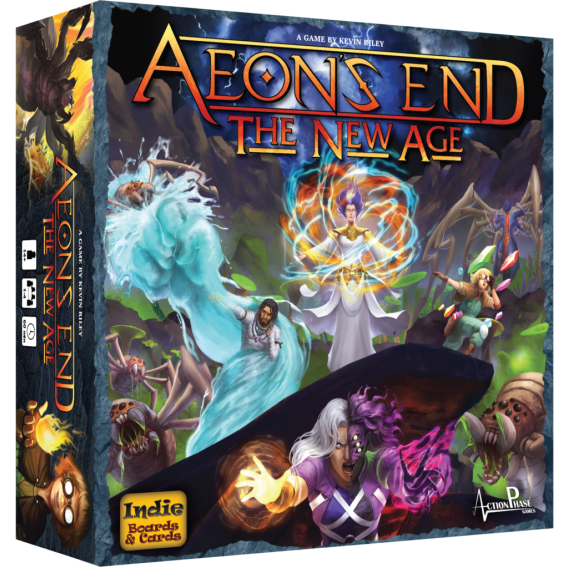 This is a campaign game: new content is revealed as you play, but unlike the legacy game, you don’t add stickers or change the game.  You can always reset.  It includes a story, but it can always be reset.

At the end of the day, Aeon’s End is just a great deck-builder that has so much content and replayability you can play as much as you want!   There’s also a lot of new ideas that I haven’t seen elsewhere (even though it’s still a deckbuilder):

The game flows smooothly at the beginning as people are moving quickly, but at the end of the game, play slows down as players work together to make agonizing decisions.  The game really brings out the cooperation.  It’s a great time with lots (maybe too much) content!