Wait, didn’t we do this already?  Oh ya, here: Review of Thunderstone Quest – Part I. The Unboxing and First Impressions

Oh, that’s right!  No, this unboxing is for The Barricades Expansion.  This expansion adds a bunch of cards and a cooperative mode.  As you might recall from the last unboxing, I didn’t want to finish a full review until we got the co-op expansion in (after all, this is a cooperative board and card games site).  I was even a little grumpy because the original Kickstarter implied there would be a cooperative mode built in, but there wasn’t.  This is the second Kickstarter for Thunderstone Quest … adding the cooperative mode.

If you look at the box, it’s HUGGE!  Well, at least the Kickstarter version is!  It’s as big as the original game! 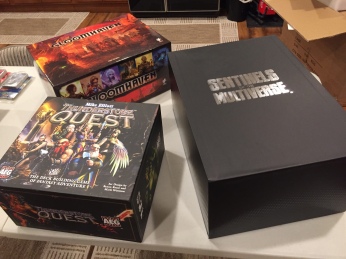 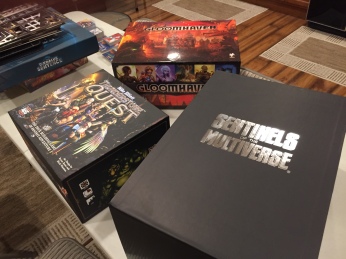 And the original game is HUGGE!   Almost as big as the Sentinels box and Gloomhaven!  This is NOT a small expansion!  For purposes of this review, we’re going to call the expansion “Barricades”.

If you just look at the outside box, NOWHERE does it say that it’s an EXPANSION!  Really! You might think you can buy this and play it standalone.  Nope!  You need a some things from the original box (honestly, not that much: the gear tokens, the board, and some treasure).  If you ordered the Kickstarter version, you get a few overall “Thunderstone Quest” expansions:  “What Lies Beneath” and “Frozen in Time”.

With those, you get lots of new monsters, items, spells, weapons, heroes, ALMOST enough to play standalone.  Without those expansions, you do need a lot from the original box.

It’s a bit surprising how big the Barricades box is!  It holds the base Barricades mode and the two expansions that came with the Kickstarter, and there’s still plenty of room to spare! 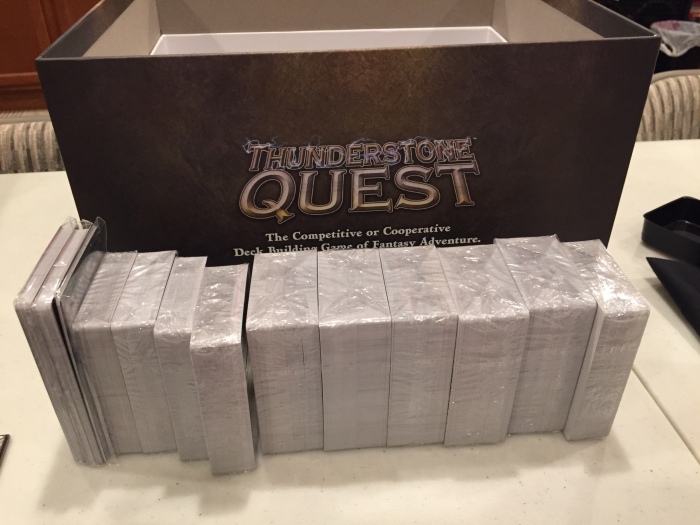 The Barricades expansion also adds two more boards and starting decks so you can play 5th and 6th player.  Honestly, we’ve wanted a 5th player the last few times we played, so this is definitely a good thing.

The rulebook is pretty good.  The graphic design is quite good, and it reads well.  It also describes all the changes needed for the co-op mode.  But here’s the thing: I had both rulebooks open the entire time, and these are BIG rulebooks!  So, sometimes I’d be thumbing through the main rulebook, and sometimes I’d be thumbing through the Barricades rulebook.

Since the barricades mode is quite different, or at least different enough, I wanted something that “integrated” the two rulebooks.  The back of the Barricades rulebook had a summary of this, which helped, but I really wanted a summary card!

Given all the amazing production in this game, a game summary card for (a) competitive mode and (b) cooperative mode would have gone a LOOONG way.

Ya.  The components are awesome. 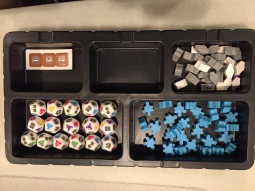 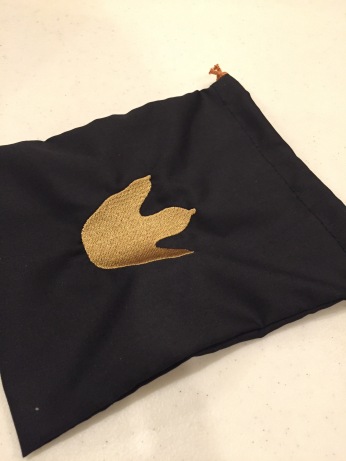 These are the Barricades!! (Can’t you tell from the labels?? Oh wait, they aren’t labelled!) 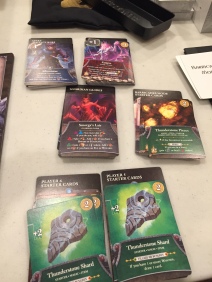 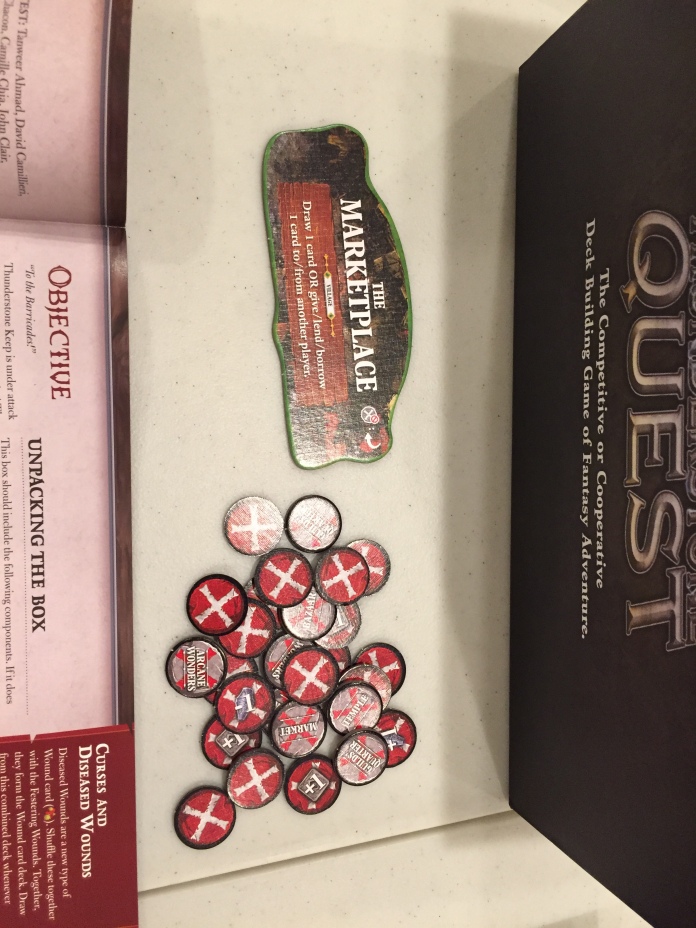 I had to add stickers to the Gameboard to update it: apparently, the second edition fixed this, but the original Kickstarter had problems.  So I had to a “legacy” change and add two stickers to the Marketplace and the Guilds. 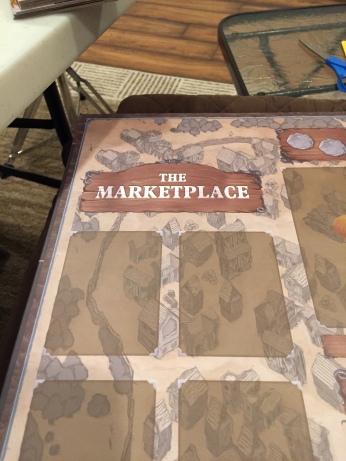 No pressure!  I added the two new Stickers …

Thunderstone Quest (the competitive version) is a deck-builder: as soon as I tell you that, you know a lot about the game.  Then it adds some village visiting and dungeon delving to round out the experience and make it feel much more like a Dungeon Crawl adventure.

The cooperative version adds a bunch of rules to this.  It’s a lot more complicated than I expected: this is both boon and bane.  It’s complex enough to have rich gameplay, but it’s complicated enough to be confounding and confusing sometimes.  There are a lot of new rules.

For a new added element of randomness, some dice (Guardian Dice) are rolled at the beginning of a turn.  The further into the game you get, the more dice you rule.   There are bunch of things these do, but usually, they set “how many monsters attack the town” (there’s much more to it, but that’s basically the idea).

Your job: Beat the big bad and protect the town!  If too many monsters attack the town, they destroy it and you lose!  Basically you lose if the town is destroyed.

The reason the name of the expansion is called “Barricades”: there are 5 barricades, one at each Village Location on the board.  If you want, players can spend 10 Gold to erect a barricade on a Location.  This is a way of “preventing” monster attacks.  The green side means the barricade is active (and can withstand one monster attack).  The red side means the barricade is down (inactive).  Here’s the set-up, showing the default barricades in inactive mode: 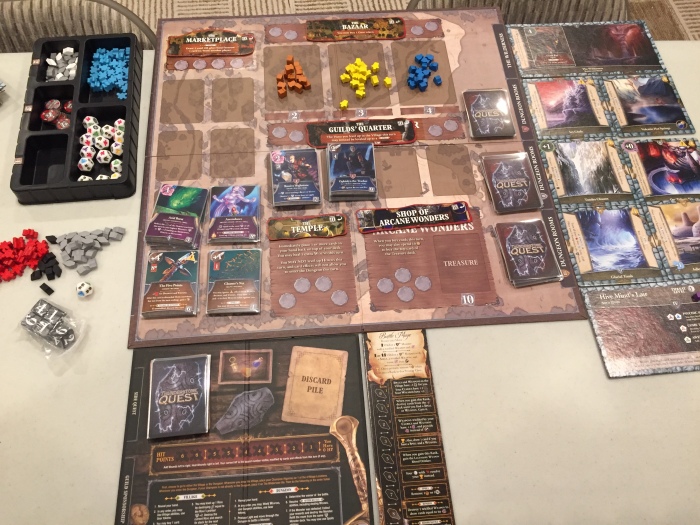 This basic idea (protect the Village) reminds me a lot of Battle for Greyport, another really good cooperative game.   Which do I like better?  Check back later … I don’t know yet …

Oh, when a Location is hit by a Monster, you put a destruction chit on the board.  Here’s my first solo game, near the end of the game: only two Locations of the village are active! the Bazaar (1 space!) and The Temple (1 space).   The rest of village has been destroyed by Monsters!

How do you prevent Monsters from destroying the village?  Basically, you head to the dungeon and hunt some monsters before they can get to town!

Village: “The scouts tell us that three Monsters are coming to the village to ruin us this day!”

Adventurers: “Well, we’ll go the dungeon and head them off … if we let some through, we’re sorry …”

New Rule: Guardians and their Lairs!

The Guardian’s Lair is new: it’s at the bottom of the dungeon, and the Guardian has a whole bunch of rules.  Remember those  Guardian Dice we rolled earlier?  They trigger some special abilities on the Guardian, which basically beat you up. The number of dice you roll is notated the upper right corner of the board (7 after turn 12+).

Although it looks like I am about to win … I lose on the next turn, because the Monsters destroy the Village!

This is probably my favorite new set-of-rules in the cooperative version.   Each player chooses a prestige class board and puts it to the right side of their player board.  As you “level up” in the game, you gain new abilities.  And there are a lot of new abilities!  It’s fun to try to level-up your character!  The XP, which were essentially victory points in the original competitive version, are now used to power your level-ups.    The main choice you make in the coop mode: do you use XP to level-up you class board or to upgrade a hero?

The class boards are still available in the competitive version, but it’s a much harder decision!  Your hard-earned XP are victory points needed to win!  But, do you want to use them for your class?  Or upgrading a Hero?  What to do?

In only one game, I found these boards added a LOT of flavor, and since there’s 12 (!) of them, there’s a lot of variety.

After one solo play (and congratulations for adhering to Saunders’ Law),  I liked it!  The major downpoint: It was a lot of work to get through one play! I basically spent all day sleeving, getting through the rules, and playing my first solo game.  And I lost.  But I liked the game.  A lot!

I am looking forward to getting it to the table (hopefully at RichieCon 2019, coming next weekend!) and trying it as a full co-op game!  Stay Tuned!

2 thoughts on “Review of Thunderstone Quest: The Barricades Expansion (the cooperative expansion) – Part Ia. The Unboxing and First Impressions”