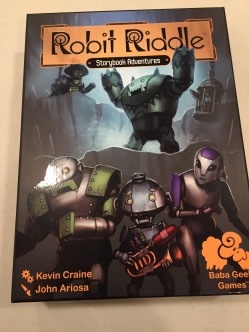 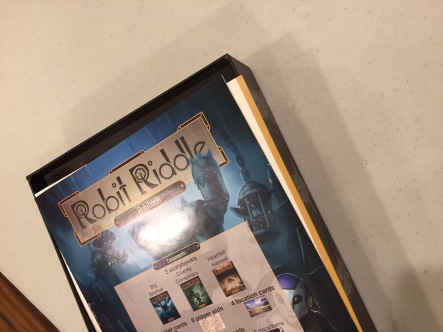 A few weeks ago, I posted my initial impressions of Robit Riddle: a cooperative, story-telling game for 1-6 players.   I was able to get it played at RichieCon 2018, and I got some great feedback.

From my first thoughts, I mentioned that, although I was happy there was a solo mode (yay, Saunders’ Law), it wasn’t very fun alone.  It felt kinda … sad … playing and telling a story to myself.   Two player was better, but my group said “I can’t really see playing this with less than 3 people”.   We didn’t get a chance to play with more than that, but the overwhelming opinion was that this game needs 3-6 players.  It’s great to learn the game with 1 player (my preferred way to learn and teach), but the game shines at 3 or more people.

Why more people?  Because this is a game of shared story-telling. Taking the narrative and expanding on it.  It was fun and cute. 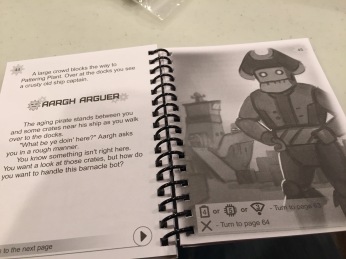 One of my friends who played the game is a teacher at mid-school, and another has a couple of younger kids.  They both echoed my thoughts: “This is a fun game, and I’d play it again, but it feels like it would go over best as a family game with kids 8-12.”  Yes, I think older players can play this, as it’s a fun light game (not a filler per se), but it would do best with kids.

My friend who is a teacher pointed out something quite interesting.  He uses board games in his classroom (for kids who are having trouble with reading and vocabulary) to help them

What did Junkerman think of Robit Riddle?

Junkerman told a very interesting story about his kids and the kinds of things they are tested on.  In a recent test, the kids had to take a paragraph and “expand” upon it, using the same tense, voice, and narrative style, to continue a previous paragraph.    He thinks Robit Riddle would be perfect for this kind of exercise.  It has terrific educational content.

Continuing the narrative, like Robit Riddle does, engages the imagination, while the same forcing constraints on the narrative.    I personally believes this shows that imagination can be used in all contexts, not just free-form and untethered.

From this perspective, Robit Riddle really succeeded.  You know what, and the game was fun.

I still stand by some of the negative things I said earlier: The entire game (cards and rulebook) could still use another pass by an editor.  The cards were pretty low quality.  But, overall, this was a good game.  We had fun, and I would give it a 7/10 on the BoardGameGeek scale.   It’s probably best as a family game, but it would work wonders in an educational scenario.