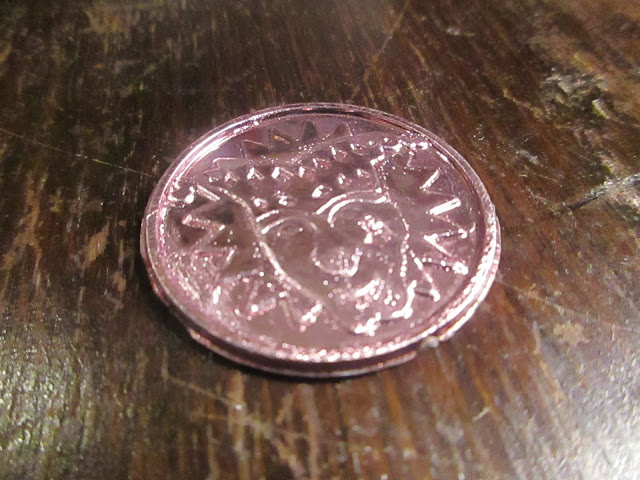 Those of you familiar with CO-OP: the co-op game may know the purple coin as something slightly different: The Happening Dude token!   It’s very similar in function to a First Player Token but not quite the same: The Happening Dude doesn’t go first, he just reads the Happenings for that day, and then the marker rotates to the next player.

What Do I Want in First Player (or Happening Dude) Marker?

What characteristics do you want in a First Player (Happening Dude) marker?

The reasons I chose the purple coin as The Happening Dude:

In a perfect world, I would have had something “fun and unique”.  We talked about a hat, a talking stick, a bead (seriously!), and a headband (Hippies like headbands).   In the end, the purple coin was “good enough” for the price.  Recall that CO-OP wasn’t as cheap as I hoped: my cost was about $34 per game.  The purple coin was only 10-12 cents If I recall correctly.

The “obvious” Happening Dude token would have been a ‘peace sign’ on a poker chip or a large cardboard cutout.   A poker chip would be cheap, but the way stickers work in the Games Crafter made it complicated (and more expensive) to make that work.    Similarly for a card board token.  (If you buy a sheet of stickers or cardboard, you have to buy the entire sheet, regardless of how much you use it.  And that’s PER GAME.  The Games Crafter charges you PER GAME for one sheet, even if you only use a little bit of the sheet.  And you can’t split the sheet across games, unless you (the buyer) do it manually off-line in a  separate order.  Like I said, complicated.)

In the end, I made a tradeoff.  The cost was probably the main reason I didn’t choose a “funner” piece.

Oh what great times we had Purple Coin!  I’ll miss you!   Your friend looks like he’s a pretty Happening Dude.  Do you think he can do your job?  He’ll never replace you, but he can have fun with us. 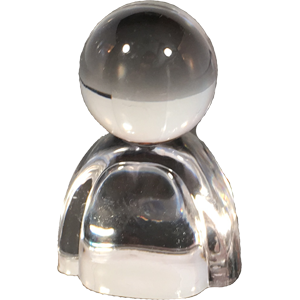 What do you think?  He’s a pretty cool Happening Dude (or Dudette)… I mean, I can see right through him!