Some of you were wondering how UNPUB Mini in SAN DIEGO went. The notion of UNPUB is that game designers with a  bunch of unpublished games come together and have new players playtest their games.  (In this case, we all came to Pair A Dice games in San Diego). This event was run by Galvanized Studios, and they put on a great event.

For me, this event was to playtest CO-OP: the co-op game. How did it go? Very well! 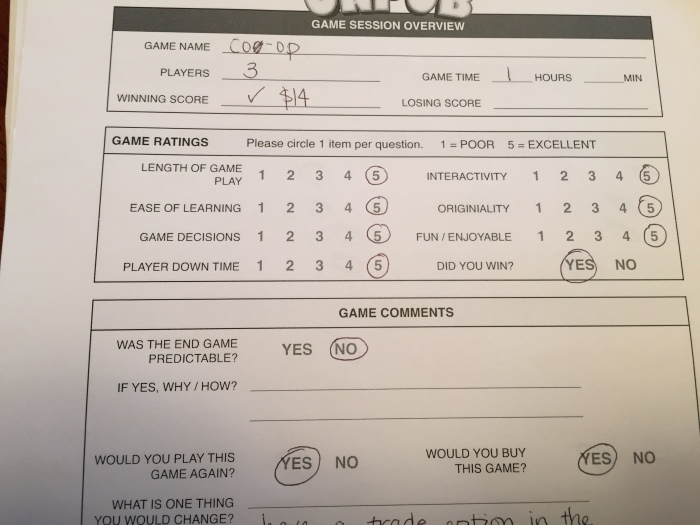 1) I got about 6 playtests from 6 very different groups. I had only signed up for one slot (because I signed up so late), but the people who ran it were very nice and very professional and let me have 2 more gaming sessions (also because a few people didn’t show).

2) I ended up with about 12 UNPUB forms. An UNPUB form is “what did you think of the game after playing it”, but in written form.

I was thinking that, “well, maybe only the positive people wrote something up”, but as Chris D. says, “Have you seen the Internet? People aren’t shy about expressing bad opinions”. So, if Chris is right, yay!

3) One form looked like a ringer, but it wasn’t!  (See picture above). All 5 out of 5! And left an email address in case I Kickstart! (Deleted from picture to preserve their privacy).

This family of 4 walked up and asked to play. I was nervous, because there were some young kids (5, 9, and 11). The 5-year old sat on Dad’s lap and just watched. The other kids looked young … were they too young?

The other kids were GREAT! I just watched them play: they laughed, they read all the cards, they were bummed when their VIBE went down, they worked together, and they just barely won. AND THEY HAD FUN!  I had fun just watching them!

And yes, the Dad signed up and gave me his email.

They didn’t really have a lot of negative feedback (they found a few issues here and there).  It was clear those kids play a lot of games, so I think if something really stood out as bad, they would have said something.  It does tell me the game is almost done.  There are really no big balance issues, there are no real obvious deficiencies, and most important: it was fun!

I have been nervous about putting ages 10 and up in my rulebook.  But every single time I’ve had younger kids play, they seem to really enjoy it.  This playtest clinched it: I think ages 10 and up is appropriate.

5) Found some other places to go for cards.

I have been going to the Games Crafter (somewhere in Madison, WI) for my cards. They are kind of expensive, but they do a great job.

One other game designer (I’ll call him B. to preserve his privacy) pointed me to two new places: qualityplayingcards and printerstudio

Apparently, B. said he can get 200 cards printed, with tuck box and shrink wrap, delivered to his door, for $7 a box. Now, the minimum order is 1000, but if I can get games for $7 a box, I might be able  to sell it! It seems like $19.99 is the magic price point: anything more, and people are less likely to buy. Anything less, and it seems like something is wrong with it. I might be able to go to $30 for a Kickstarter with shipping. (And this price came from qualityplaycards).  I imagine $7 for production, (amortized cost) $7-13 for artist, $10 shipping will put me at $30 if I kickstart. If I can lower to $25, then I think I stand a better chance for a kickstart.

The interesting thing is how expensive shipping can be.

More great advice from B.: make a standard contract with Artist’s or you’ll get burned: 50% up front, and a penalty for missing the deadline (10%). Ben told me he paid an artist 100% up front, and he never saw anything. They have no incentive to do anything after they have the money.

If nothing else, there are at least 3-4 game designers I will try to stay in touch with. They had some good feedback and good ideas, and good places to go for future playtests.

In general, a favorable response. My inner grump was “worried” that since I signed up for just 1 session, I’d go, have 1 playtest and that’d be it. Nope, it worked out SO WELL.