Those of you paying attention might be saying “Wait a Minute! Ark Nova is an engine building game that’s completely competitive! You can’t play it cooperatively!”

Well, this would be a pretty short blog entry if you couldn’t.

An Idea From Solo Mode

To win the solo mode, you need to get at least zero victory points! Scoring is a little different in Ark Nova: it is a victory point game, but the number of victory points you get is (nominally) the difference between your Appeal value and your Conservation track (modulo some rules for snapping to an edge).

See the picture above: My victory points for a solo game were 80 – 67 = 13 victory points (the conservation track uses the smallest number in the range on the green track). Don’t expect huge scores in this game: if you can get a positive score, that’s a big deal! (Note, if this were the other around, I would have -13 victory points! A loss!)

Engine Building in a Zoo

Ark Nova game reminds me a little of Terraforming Mars meets Endangered: it’s an engine builder (with lots of cards: see above) with a zoo/conservation theme where you build your own zoo: see below.

Ark Nova is also about as long as Terraforming Mars: It’s quite long, and the more people play, the longer it is.

At first blush, this seem like is that there really isn’t any “take-that” in this game. By “take that”, we mean mechanisms were you intentionally do something bad to another player to help yourself. In our first solo game, we didn’t see any cards that would “screw” other players. That gave us hope that maybe turning this into cooperative would work! Generally, you are just worried about building the best engine you can and doing the best on your turn! There is player interaction in the sense that you might take an animal someone else wants, or start the break early, but these are much more passive interactions. Generally, you aren’t out to get people: you just want to build build build.

Unfortunately, after playing again and looking closer at the rules, there are quite a number of “take-that” mechanisms in the game: stealing cards or money, putting poison, hypnosis, constriction. See images form the Icon sheet below. All the yellow/red tokens are “take-that” to some extent. 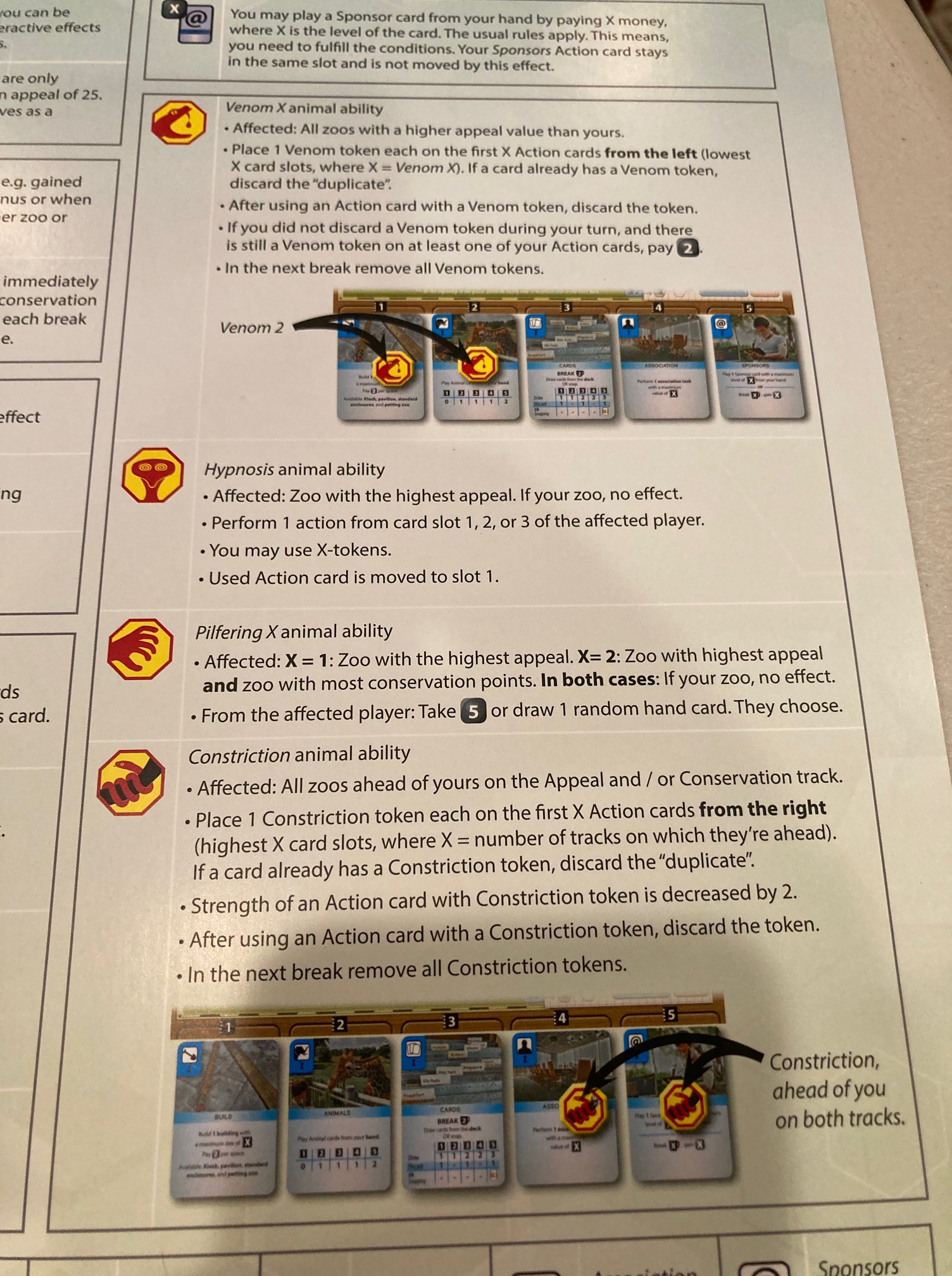 This might be a sign that a cooperative mode is a bad idea. To make this work, we’d have to either (a) completely eliminate these cards or (b) rewrite the text so the effects are different. The deck is MUCH too large (212 cards) to go through it apriori and eliminate the “take-that” cards before game, so we’ll have to eliminate them as they come up.

Once we get rid of the “take-that” cards in the game, it’s very simple to add a cooperative mode. Ready?

In the cooperative mode of Ark Nova, players work together to build their engines with the intent that no player gets negative victory points.  Players win together if all players have zero or more victory points!

And that’s it! Well, that’s the idea at least: we use the idea from the solo mode that negative victory points are bad, so that all players must work together to make sure none of their fellow compatriots are lagging. We like this idea because it keeps the entire flow of the game, but still gives somewhat of a notion of cooperation in the endgame. 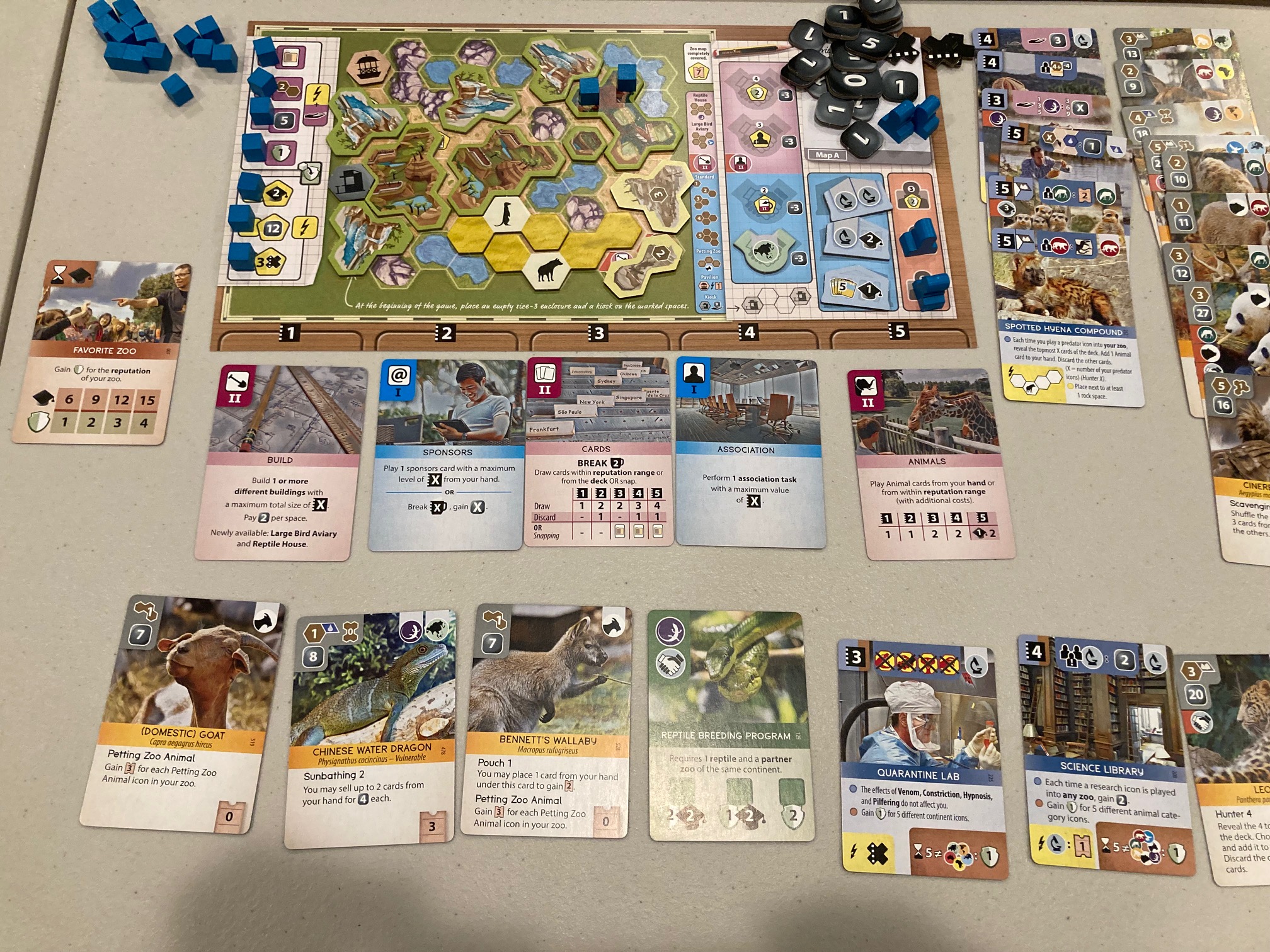 Those of you with good memories might think “Hey, didn’t you propose something like this for DungeonLords?” Good memory! Recall from this Top 10 Games That Can Be Played Fully Cooperatively, we added some rules to make DungeonLords cooperative! The idea was very similar:

In the cooperative mode for DungeonLords, players win as a group if they can keep all Dungeons “pristine” and unexplored by the hero parties.

We dubbed this stay-out-each-other’s-way cooperative, and that’s very similar to what we propose here: players will mostly just try to stay out of each other’s way as they play.

We started Ark Nova with the best intentions to play it cooperatively. “How hard can it be? Play normally and get rid of the take-that cards as you play!” Harder than you think.

First of all, there’s a lot of cards with a lot of text in the game that come out (in the display or in your hand). Culling the “take-that” cards dynamically is actually a lot of work because we have to read a lot of cards as they came out: this really ground the game to a halt. In the end, we just let the “take that” cards come out because they weren’t that bad. But, it seemed like an inauspicious start.

Also, what really happened: we all got too invested in our boards!! We played for 3.5 hours (4-player game). After so much investment in time and momentum (individually) in our zoos, we just kinda “forgot” about playing this cooperatively. After 3.5 hours, we were also tired and kinda just wanted the game to end. My players essentially said that “there was too much thinking: trying to embrace a cooperative mode at the endgame just seemed out of reach”. It was too much.

Is it a good idea to turn Ark Nova into a cooperative game? I don’t know, but our first experiment/session in this endeavour was a complete flop. Players (individually) got too invested in their own zoos and it was too hard to break out of that mold. It almost feels like we just ran a psychology experiment: “What happens if you try to add cooperation to a world-view that has already embraced competition?” In our case, the cooperation failed.

That doesn’t mean we might not still pursue this cooperative idea, but preliminary results show that this is perhaps a bad idea for Ark Nova.