Let not mince words: I picked this game up because Tom Vasel raved about it on the Dice Tower (and gave it a 9.5/10).   It’s a cooperative storytelling game, set in a Pirate universe.  It seems to be “fun” pirates (corsairs? like Julio Soundrel in Order of the Stick) instead of dirty, grumpy, filthy pirates.   Recall that The Secret of Monkey Island is my favorite game of all time,  so this was an instant buy!  It came out in the beginning of April and I picked it up (ordered it online) immediately from the manufacturer. EDIT: At the time of writing this review, it’s already sold out!

I also got some “Special Swag” (basically a card and token holder, see below) by ordering directly from them.

The core of the game is an Adventure book: each pair of pages has a beautiful and thematic picture on the left and “some actions” on the right when playing.

There’s quite a bit of cardboard … (see above) …

There’s some dice and cards (1 12-Sided for each player and some standees) and not too many mini cards.

There’s some player sheets: WARNING!  You only get so many, so it usually makes sense to print characters sheets from the web site rather than use the pristine ones (or copy the pristine character sheets).  There is EXACTLY one character sheet for each different type of pirate, so you might not want to use these out of the box…

And some logs for how far along you get.

I think  that manufacturers are learning: the last few games I have looked at have had excellent rulebooks.  This one is no exception.    The first page(s) have lists of components, so you can know the names of components as you set-up the game.

The Set-Up is pretty good, although it is a bit complicated by the fact that there are no solo rules in the rulebook (but see below).

In general, the rulebook is excellent overall.  My only complaint is that it is a bit spartan: it barely fits in 8 pages and a few times I needed some rules clarifications.  But, you get through it.

You Need An App To Play The Game 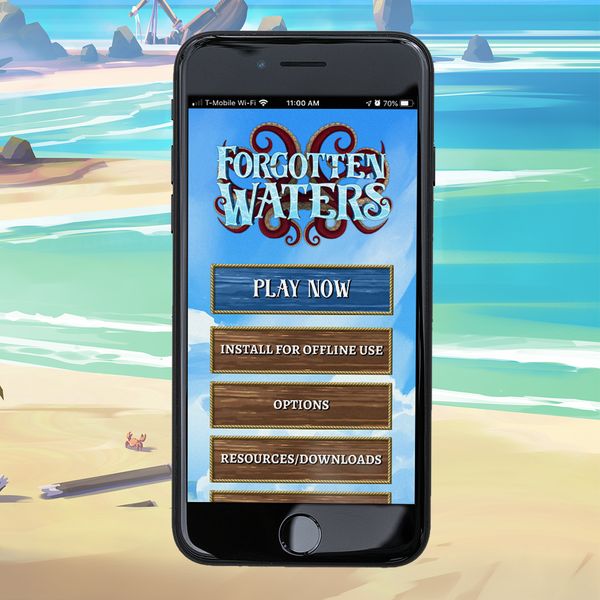 This may be a sticking point for some people: you need an app to play the game.  Well, it’s not even an app: it’s a website.   So, just point your phone or your pad to it.  The app (sorry, website) is decent.   The coolest thing is that the first scenario has “acting”, “sound effects”, and lots of great content.   At the time of this writing, they only have these little touches for the first scenario.  After that, one of your players will have to read a lot of text from the screen: it’s a storytelling game after all.

So, I found the app (sorry website) to be a bit clunky.  You can’t “go back” in the browser, you have to go back in the app (website) itself: there’s a button at the top. Many times, I wasn’t sure what to do next from the app.   At one point, I pressed the wrong button and went “somewhere”, but I couldn’t back arrow to get back to where I was!

Here’s the thing: there’s not THAT much state stored in the app (website), so you can usually just reset the whole thing and start over if you ever get to a weird spot.  So, I was able to get around and use it, and when I was really into it: the voices and sound effects were totally on point!  Every so often (more often than I care to admit), I’d just press the wrong thing, or forget something on the previous page … and couldn’t go back. So, I’d just start over.  And it was ok.  A little clumsier than I expected.

The game, when you buy it, says 3-7 players on the box.  If I had seen that, I wouldn’t have bought it!! I only got it because Tom Vasel raved about it so much.  But, here’s the thing: When you open the app (sorry, website), you get both solo and 2-Player rules!  And these are rules provided by Plaid Hat, so they are “official” rules.    I think Plaid Hat is doing themselves a disservice by putting 3-7 on the box, because, like I said, I probably wouldn’t have bought it if I just saw the box.  They totally could have put 1-7 on the box.

The solo game worked well.  I wish they had a way to PRINT out the solo rules!  They are ONLY IN THE APP!  So, whenever I had solo rules questions, I had to “break” my flow and find it in the app (sorry, website).  I probably should have just opened two tabs in my browser, keeping on the solo rules in one tab and the app (website) in another.  Listen, the solo rules are good, but they are more complex than you might expect.  I think I ended up writing down the major rule changes ON A PIECE OF PAPER so I could have that in front of me as I played.

The solo rules work pretty well, especially as a way to learn the game.

I lost my first solo game.  I had fun, but I was kind of annoyed.  And that’s MY FAULT that I was annoyed: I didn’t set my expectations properly.

So, here’s the thing: the game is JUST A STORY TELLING game!  At some point, you’ll make choices that seem fine and something dumb will happen.  Or you’ll just die.  BUT THAT’S THE WAY STORYTELLING GAMES GO.

I really liked the Tales of Arabian Nights Game (another storytelling game), but only after I set my expectations.  It’s just an experience (not a game) where stupid stuff  happens to you and you don’t really have a choice (you “choose” things in the game, but the choices never correlate with the results).  Our three main complaints with Tales of Arabian Nights:

Forgotten Waters fixes (most) of these!

So, I am very happy that Forgotten Waters fixes a lot of these problems.  But …

The game has Mad Libs section at the start of the game: this really makes the game silly and invests you in the game.  I, of course, went with Monkey Island references.

As you play through the game, you get to make  choices to “up your stats”: Exploration, Brawn, etc (see above).  At certain points in the game, you also get to fill in your constellation (the star cluster above) and when you get to a !, something happens which is very peculiar to your character! Very cool!  The actions you make in the game help you choose “which stats” you up.

The main way you up your stats is when you take actions: on the right page of the adventure book are 6 actions you can take, and each one has its own effect: some advance the plot, some advance your stats, some clean up the ship, some add hull, some add crew … there’s a lot of things you can do!

Here’s the thing that I had trouble with.  The game has a lot of fiddliness.  Look at all the things you have to maintain!

There are boards for each position: see above: Cooper, First Mate, etc.  There’s 6 roles, i.e., 6 pieces of maintenance per turn.  Then there’s the choices of actions (where to put the 4 pirates in the rulebook), where to sail, which hexes to put out, etc…

So, putting all this together, it feels like you all your choices should be making your way towards a final game!  And there’s a lot of choices!  But, at the end of the day, YOU ARE SIMPLY BEHOLDEN to some random events.  That may kill you.  Or something worse.

I was annoyed because I was making “choices” throughout the game, doing lots of maintenance and upkeep as I played, and then I died because I turned over the wrong card.  The End.

IF you put your brain into the mindset “THIS IS A STORYTELLING GAME”, then this will be real fun: the movement, the stories, the app (website), the flavor text, the mad lib games ALL make the game full of flavor!

The choices you make still help the game flow, but at the end of the day, you can just die and totally destroy your game.   If you think you can out-think the game, nah, then you are playing the wrong game.   This is a Storytelling game.

At the end of the day, this is a fun game.  It fixes a lot of the problems with a lot of Storytelling games (like Tales of Arabian Nights), and the game has a fun sense of humor.  Although I had problems with the app (I mean website) and the basic “fiddliness” of the game, I really did like it.  I think this game will work best with a group who can laugh with each other/at themselves while they play.  The solo experience was good enough to learn the game, but I think the game will really shine when played together as a group.

Appendix: Choose Your Own Adventure

My game group really enjoyed the first Choose Your Own Adventure: House of Danger game because it was stupid fun.  When I played, I set my expectations: we made choices as a group and read through a dumb adventure.  We died a few times, but we didn’t care because it was so easy to reset and continue.  Forgotten Waters is like that, but the set-up and maintenance is a bit heavier, but you are rewarded with a more customized game with prettier graphics and effects.  If you are looking for a game with a storytelling where your choices distinctly matter, then you should look at Detective: City of Angels:  It’s a murder mystery with limited replayability because once you have played through it, you know the answer!  Some other games with story books (that have a real game underneath) are Agents of SMERSH and Near and Far.

7 thoughts on “Part I: A Review of Forgotten Waters. Unboxing, Solo Rules, and First Impressions”