One of my top 3 games of all time is Arkham Horror, 2nd Edition.   My friends and I played the heck out of it when it first came out, and we still play at least once a year for Halloween (I have at two copies for two groups)!  It seems to be a real crowd pleaser in my game group(s), but it’s not for everyone: it has a lot of rules to absorb and a lot of components to manipulate.  My game group(s) have absorbed it and know the game quite well.

Something happened as we played Arkham Horror more and more:  we started to “streamline” the play.   The rules (above) dictate that play proceeds from the first Player (clockwise), and each player must finish their phase COMPLETELY before moving on to the next player.

During each phase, every player, starting with the first player and continuing clockwise, performs the actions that take place during that phase

When we are playing strictly by the rules, our game play is sequential: every player action has to finish before the next player action completed.

We noticed this was taking waaaaaay too long!!! So what did we do??? We all started taking our turns at the same time!  Basically, everyone gets tired of waiting for “their turn to come”, but since this is a cooperative game (and we are all working together), we can all go at the same time!  We all perform UPKEEP at the same time.  After that’s done, we perform MOVEMENT at the same time, and so on.

In this mode, we are play each phase concurrently: players all act at the same time!

Visualization of Sequential and Concurrent Play

This particular concurrent method SIGNIFICANTLY speeds up gameplay, as there is much less waiting!  In fact, this very idea is used in Computer Science to make computer programs go faster!!! You take a computer program and parallelize it, causing a bunch of work be done!  In Computer Science circles, this idea is expressed in many ways: the Scatter-Gather, Work Crew, or Map-Reduce. (See here for reference)

If you can do this, this is an easy way to parallelize, or make gameplay faster!

The problem with all of us acting at the same time was that were times  when two (or more) players collided in their actions!!  For example; What if we both drew from the same deck?    Since this is a friendly, cooperative game, the order we might draw from the deck doesn’t matter: we just both draw and one of us just happens to go first.  If we were feeling pedantic, we would draw in player-turn order, but most of the time we didn’t care: it was better to be moving quicker through the game than care about “who-got-which-cards”.

If we were pedantic in our play, we were ensuring that the game was playing EXACTLY the same way as if we had played WITHOUT the concurrency.  In other words, if everything happens in the exact same order as the game had played WITH THE SEQUENTIAL RULES.  If we can do this with our concurrent play, we are ensuring sequential consistency.

In other words, as long as we are pedantic in our concurrency, we are ensuring that the game plays out in exactly the same way: it is sequentially consistent.

In Arkham Horror, the decks (see above) we draw from are meant to be a source of randomness: the card we draw is meant to be “a random card”.

If there are things that really don’t really matter the order that they occur (i.e., , two players drawing from a deck at the same time like above), then we have relaxed consistency.

In the end, this was how we played Arkham Horror 2nd Edition: Concurrent turns with relaxed consistency.   This model helped the game move much faster! 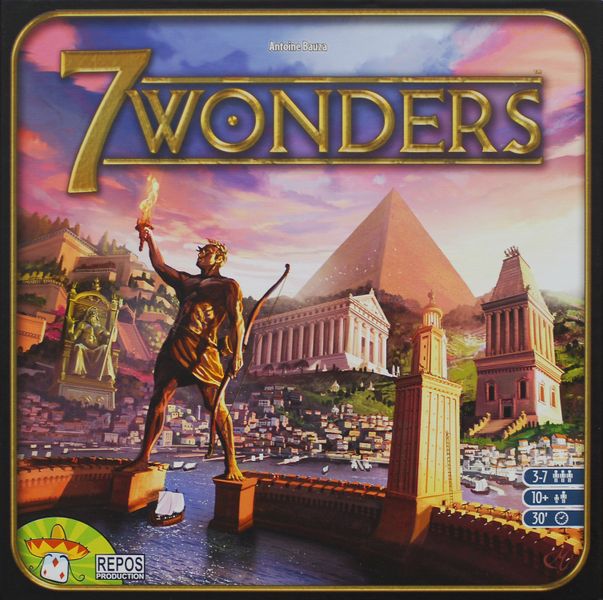 It’s funny: 7 Wonders has weird place in my game groups: people love it or hate it! (It turns out, it’s just my game groups, see here).  But one thing everybody seems to like is the Simultaneous Action Selection!! This is very similar to what we ended up with in Arkham Horror (concurrent play with relaxed consistency), but the concurrent play  in 7 Wonders is much smoother.  Frankly, there’s only two main phases (passing cards concurrently and then playing cards/effects concurrently, see below)! 7 Wonders has been designed to avoid the consistency traps we saw in Arkham Horror!  Arguably, that’s Simultaneous Action Selection’s greatest feature: simple concurrency with no need to ensure a consistency model: that’s just the way it works.

If you squint, you can visualize the two concurrency phases in the main play:

That’s why 7 Wonders works so well with a large group: large amounts of concurrency! 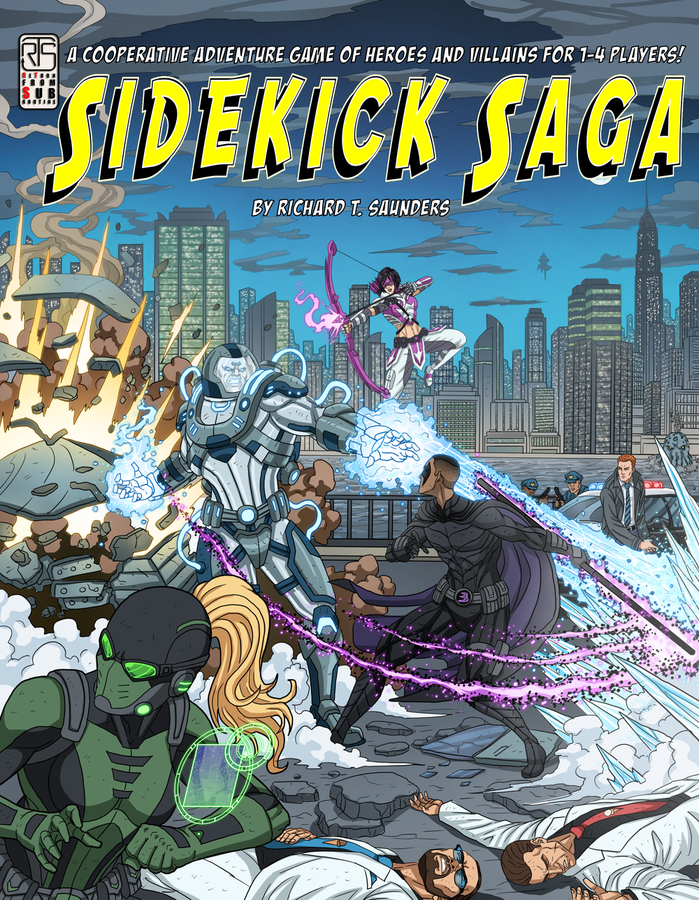 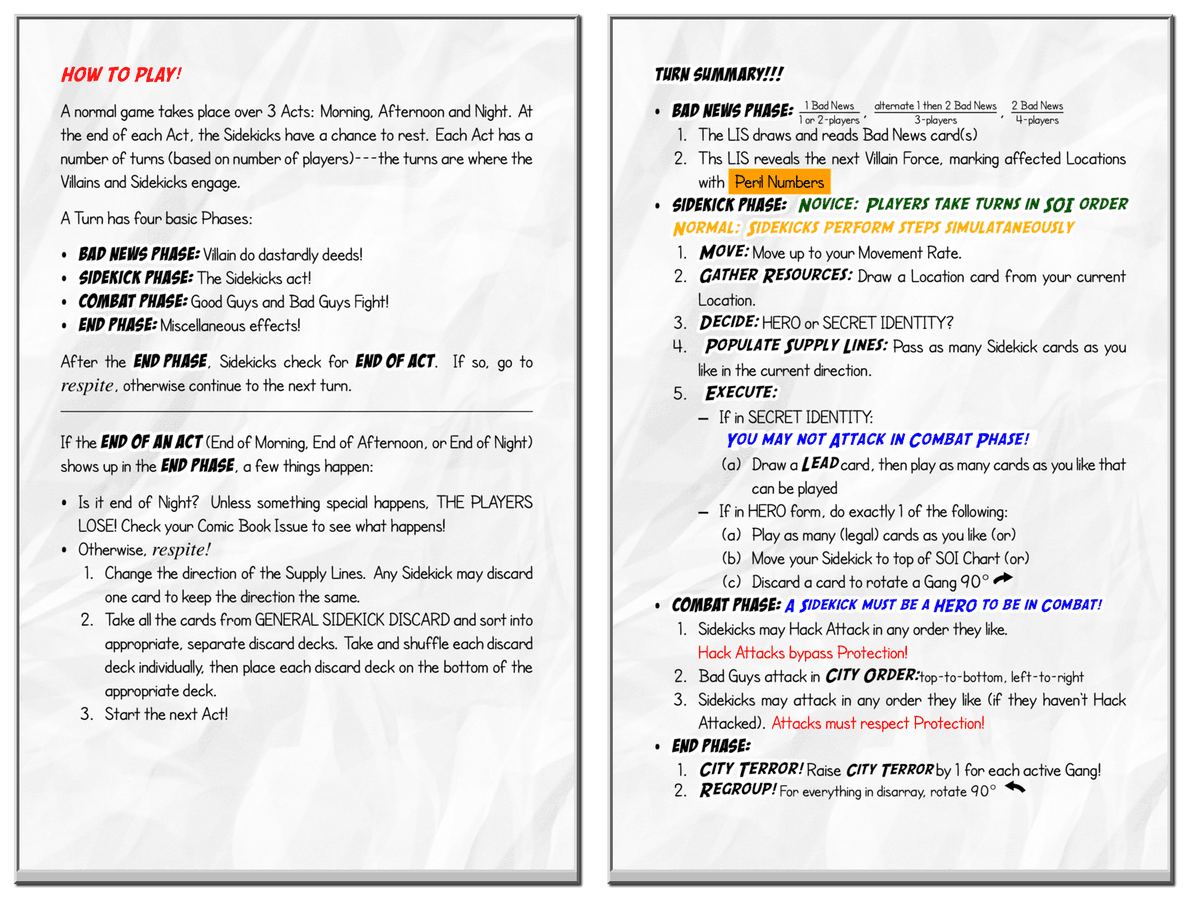 Originally, the Sidekick Phase (see above) was meant to be purely Simultaneous Action Selection: players strategize together at the start of the phase, then each perform their entire Sidekick Phase completely concurrently!  But several things got in the way:

Addressing each of these is simply a matter of making sure you ensure sequential consistency, but there’s just enough edge cases/rules that it can be confusing, especially as players are learning the game.

So I backed off Simultaneous Action Selection to a Concurrent with sequential consistency model  … like Arkham Horror.  At least players would getting SOME parallelism.  Recall, however, that model was achieved ONLY BY EXPERTS AT Arkham Horror!!  Playtesters, even with experienced players, got confused by the model.  So, I had to introduce a purely sequential mode: Novice!

In an ideal world, there would be three modes of Sidekick Saga:

The problem is that Novice was a bad word to use (and what Rahdo picked up on his “Final Thoughts” video).  Novice implies someone who is perhaps not used to modern board games: that’s not at all what I meant!  I meant someone who is new to THIS GAME!!  So, that’s my fault.  What I should have used:

The Second Edition of the game will fix this (and there will probably be an updated rulebook on BoardGameGeek).

4 thoughts on “Concurrency in Cooperative Board and Card Games”