We just coined a new phrase today: Cartman Co-operative.
My friend Josh and I were discussing the new Star Trek: Frontiers game; it’s a re-theming of Mage Knight into the Star Trek universe. We are both fans of Star Trek, so we were looking forward to playing it. (I am excited: it just shipped yesterday).

“I wonder how much it’ll be like Mage Knight. I mean, it’s co-operative, but we all seem to do what we want. I want to attack that monster, but so do you, so whoever gets there first gets the monster.”

“It’s Cartman co-operative: I do what I want.”

If you’ve ever watched South Park, the character Cartman is the epitomy of selfishness, as exemplified by his catch-phrase (one of his many): 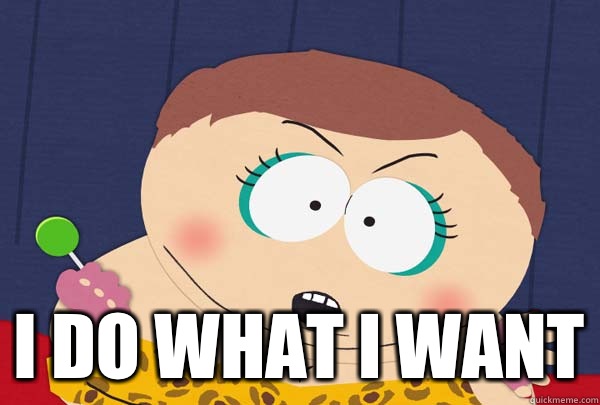 This seemed to be the vibe every time we played Mage Knight. In general, we were helping each other, but if there came a chance for glory, we tended to take that chance (regardless if it would have been better if someone else did it). I am not saying everyone plays like this, but for some reason, the games we played seemed always to  go this way.

Games that are Cartman Co-operative

Why Legendary? Since there is a lot of emphasis on victory points (and some of the heroes you choose concentrate more on points rather than winning), the game is co-operative unless someone can “do what they want” to get more points at the end.

I think any co-operative board game that tends to concentrate on points will tend to be Cartman co-operative. Can you think of others?